A little introduction of the game, and initial demo.

"Our Dear Paper Fighters" is a top down shooter about a bunch of kids playing a game using pieces of paper, and they invite you to join in, yay! 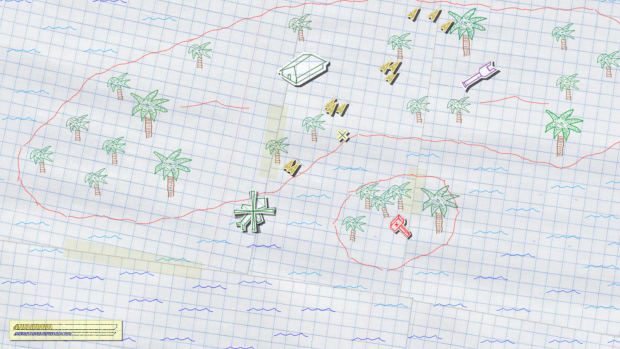 It's my first game (or first thing that looks like one, at least), after several abandoned projects since 2012. I'm using a custom engine written from scratch using C++ and SFML, which I've used for all my game attempts. The code is a giant mess, but at least it runs without -many- errors.

I uploaded a demo, which you can find in the Downloads section. In there you can play the first two missions and watch a little cutscene in between to get a little idea of what's going on in the game (if you are into that kind of thing).

While the demo right now only has two missions, the final game is supposed to have seven; initially it was supposed to be five, but I ended up splitting the first mission in two because it was too long, and afterwards I decided to add a short prologue mission at the beginning to let players get an feel of the gameplay without watching the intro cutscene, so yeah, seven.

I have a good idea of how the rest of the missions will play out, but even if they are short, it's still time consuming to make and test one, so please be patient. As soon as I finish a mission I'll upload a new version of the game, and hopefully I'll finish the whole thing before 2020.

The music in the video is not made by me, and it's not included in the final game, sadly. I made music on my own for the demo, having never made music before in my life, and, well, it turned out kinda crappy, sorry about that, hopefully I'll improve it in future versions. As of now, you can mute it if you don't like it, don't worry.

If you decide to give the game a shot after reading this, remember to check the controls in the Options menu before playing!

The gameplay style reminds me of the old Strike series of helicopter based games, so this was a blast to watch.

You know, the game wasn't supposed to go live yet, this article was just a draft that I made before going to sleep, and now I wake up, open this up to finish the draft (mostly to add some images) and I'm surprised with your comment.

Anyways, I'm glad that you liked the aesthetics! It is indeed inspired by the Strike series (which I was going to mention in the article but I went to sleep). I played the hell out of Urban Strike as a kid, that game was tough as nails. This game is basically "Urban Strike... for kids!".

Thanks for passing by! I'll finish the article now...

Reminds me of tigerheli i think the game was called. Very fun. Very hard. But addictive. I love the hail of bullets your chopper sprays

That spray of bullets is the secondary weapon. Overpowered as hell, just how I like my weapons.

The secondary is not available in the current demo, though, because it's supposed to be introduced by the third mission, and, well, the third mission is not done yet (but hopefully I'll finish it soon).

Thanks for passing by!

You know, I was thinking about that the other day, but I can't make the sounds myself (I have a somewhat deep voice, and the characters are supposed to be kids, so that would be awkward). Then I remembered that I have a four year old niece that could help out, but she's a little devil that can't be controlled by anyone and will surely do the exact opposite of what I tell her to do, so I ended up scraping the idea.

Let's just assume that the sounds are like this because the kids are so inmersed into the game that they hear real sounds instead of their own voices... because that was totally my intention, I had everything planned, I swear.

By the way, thanks to feillyne for uploading the images! (Asumming it was done manually).

I set up this page yesterday without images, and today I checked this and it had five images uploaded. I was paranoid thinking that maybe I was becoming a somnambulist and uploaded them in my sleep, but apparently it was him who searched and uploaded them, so, thanks!

Thanks man! It's a start.

Please let me know where I can get this game! I am in love with the design. If you are looking to spread the word to new people on social media, try out a free crowdspeaking campaign on HeadTalker or Thunderclap. Could really help the world see a cool game like this!

You can find a demo in the Dowloads section if you want to try it out, although the sounds and music are very crappy and it only has two missions.

I appreciate the suggestion about using those crowdspeaking sites, but I don't see myself using them. Honestly, the more people I reach, the more anxious I get.

I'm making this game just for fun, and I'm not expecting many people to play it, and that's okay.