Today, we're pleased to announce the launch date for our upcoming War of Rights crowdfunding campaign.

Hello and welcome to our twentieth field report!

Today, we're pleased to announce the launch date for our upcoming War of Rights crowdfunding campaign. 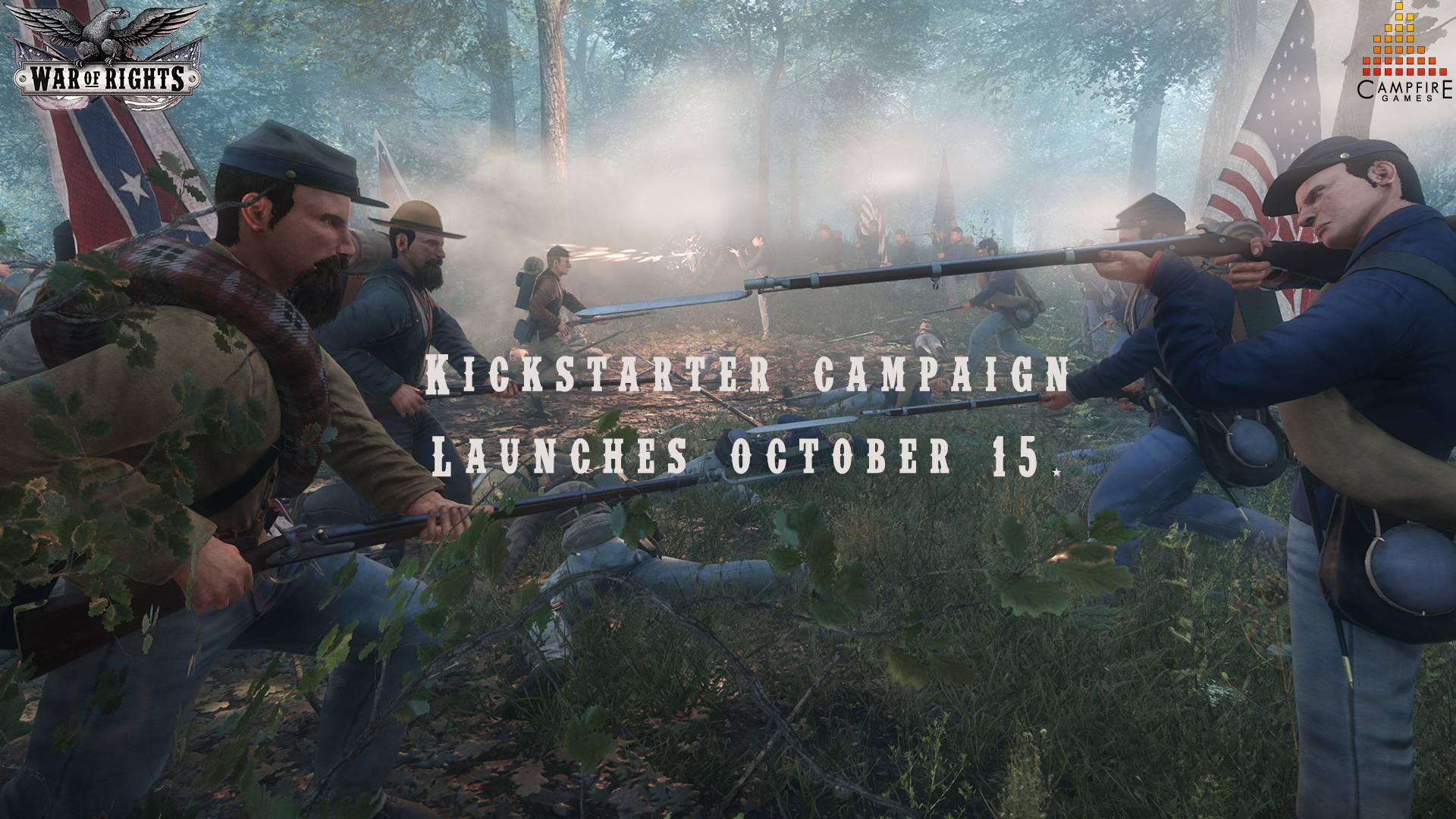 In order to be able to push the development to the next level and get the game out in a much more polished state as well in a more timely manner, we feel like Kickstarter is an obvious option to explore.

The Kickstarter campaign will feature a wide range of pledge tiers (1-500 USD) as well as exclusive Kickstarter backer rewards. It will also highlight a bunch of gameplay systems we haven't talked about or shown yet.

We hope you'll all check us out when we open the doors on October 15th and will help us to spread the news of the existance of the campaign to all whom you think may be interested.

That is all for now. We'll leave you with a collection of screenshots and historical background information we've released in the past few weeks. 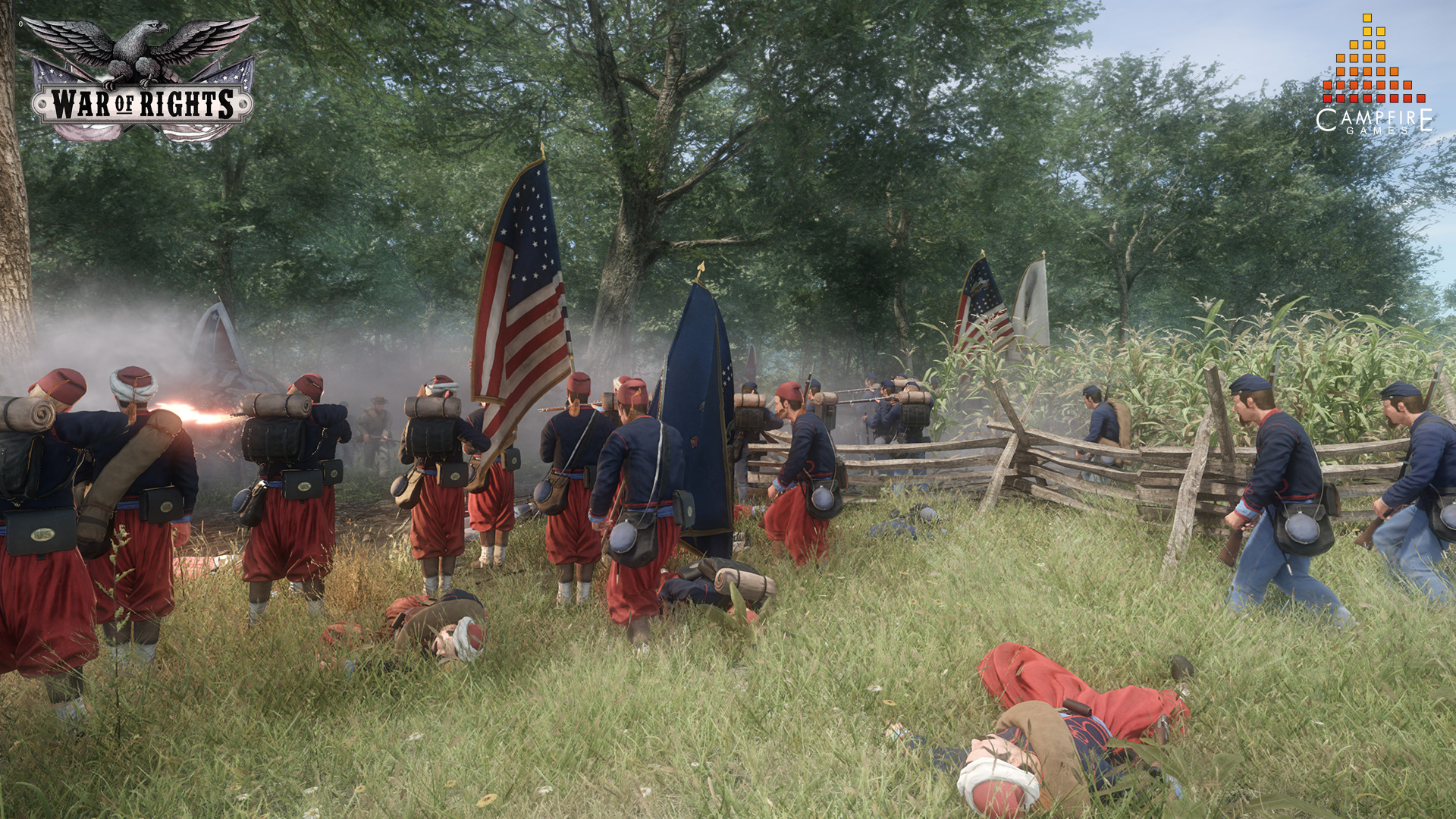 Fight at the East Woods

The 2nd Massachusetts Infantry, together with the attached men of Collis' Independent Company - the "Zouaves d'Afrique" - fighting confederates near Millers Cornfield. 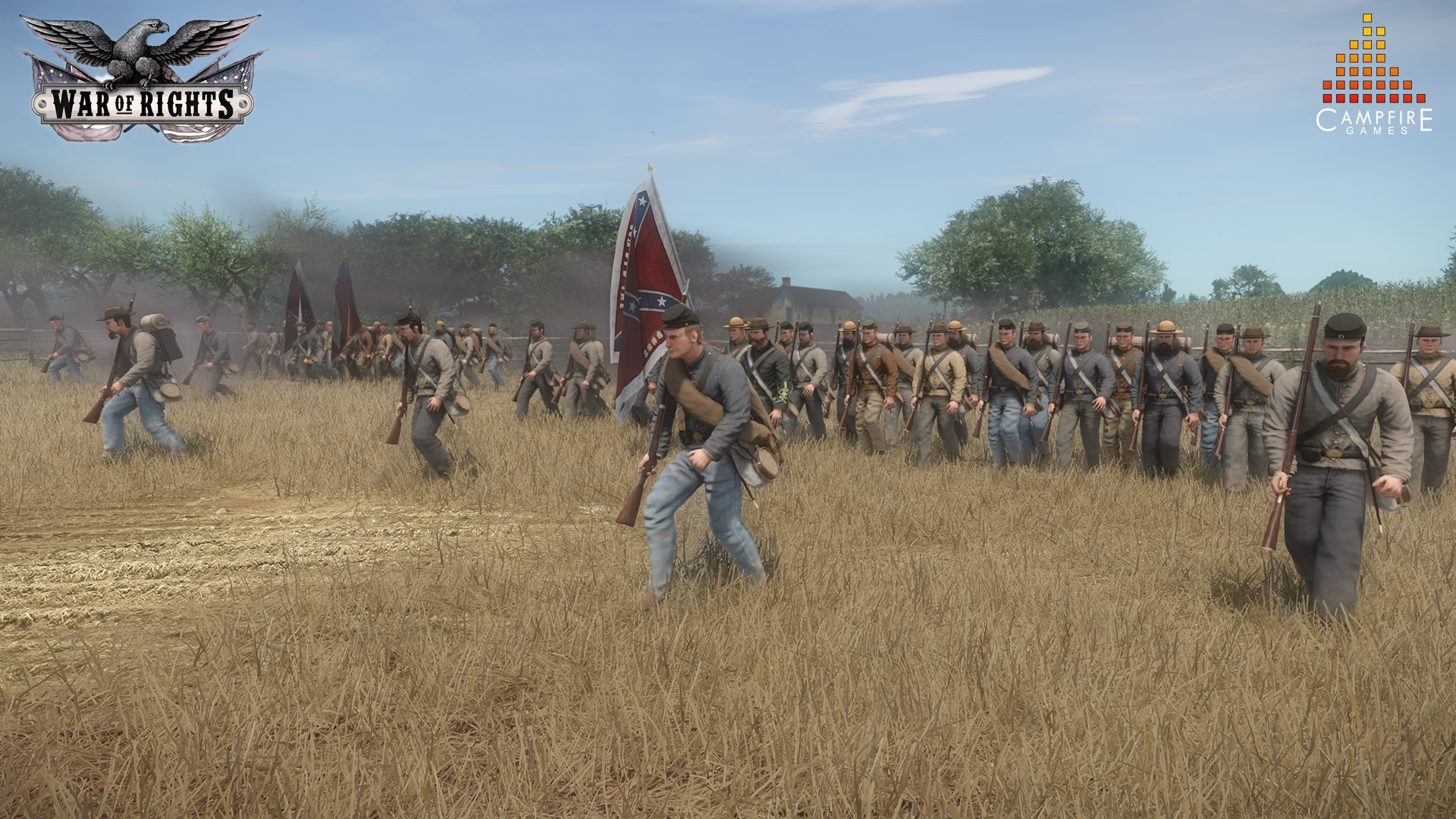 Reinforcements for the Sunken road

While the Confederates got heavily attacked at the Sunken Road, Brigadier General Wright's brigade got the order to send fresh reinforcements.
The 44th Alabama and the 3rd Georgia formed at Gen. Longstreet's headquarter at Piper Farm and dressed their battle lines. In addition, skirmishers were sent out infront of the main line to fight the enemy pickets.

It was during this advance, when soldiers of Wright's brigade saw General Longstreet himself, helping to shoot a 12lb Napoleon near the Apple Orchard. 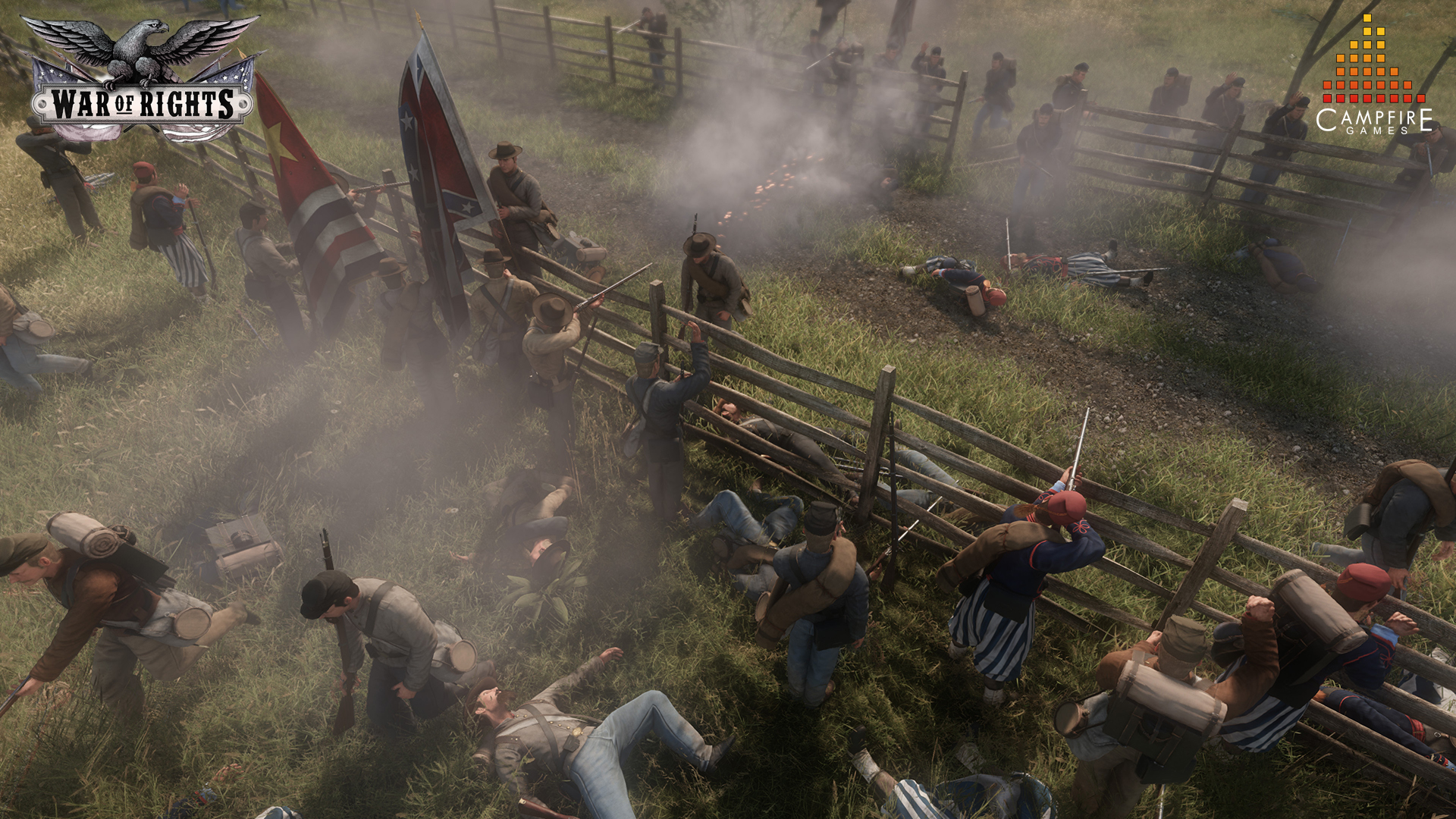 The retreat of the Louisiana Brigade

When the Union infantry rushed towards Miller's Cornfield, they drove the Louisiana Brigade back to the West Woods. Along that brigade was the famous 1st Louisiana Infantry, which had a company of Hay's Wheat Tigers attached.
When they finally reached the Hagerstown Pike, the soldiers faced each other across the chest-high rail fences that lined along the road and traded volleys at point blank range. Two regiments of Union sharpshooters joined in the fight and poured a heavy fire into the left flank, while a battery of cannons unlimbered 75 yards from the road and raked the Tigers’ line.

In less than half an hour, both Louisiana brigades had been shattered.
Two days after this slaughter took place, Alexander Gardner began taking his battlefield photographs and made the most famous photo of the war, displaying the casualties of this fight. 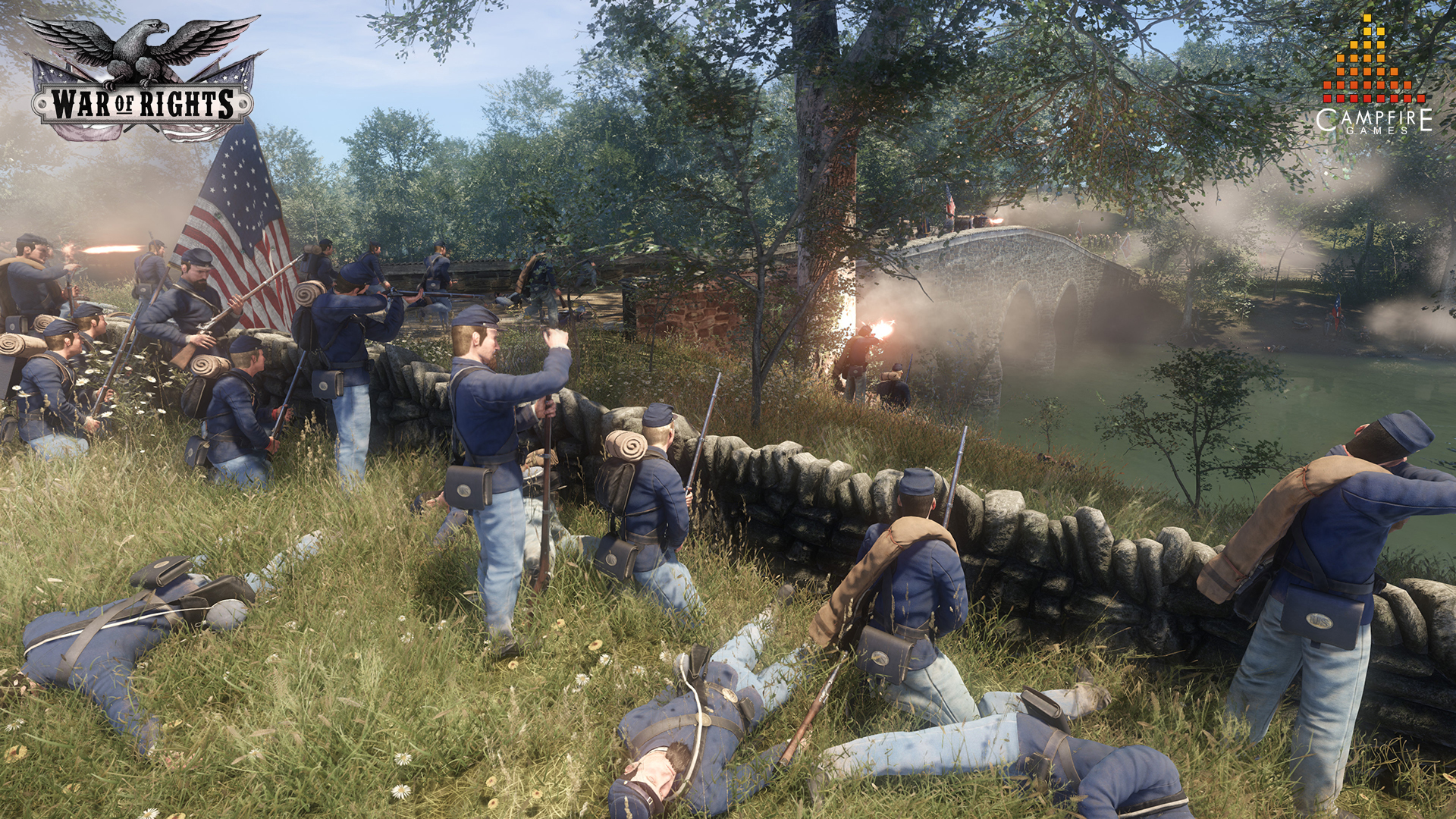 While the union attacks concentrated on the northern flank and center of the battlefield, the southern flank was silent for a long while.
At about 10:00 AM, General Burnside tried to cross the Antietam at the Rohrbach's Bridge, which was later known as the Burnside Bridge. Two union advances were pushed back by 400 confederates - the 2nd and 20th Georgia regiment, under the command of General Toombs.

The third charge to take the bridge was at 12:30 PM. It was led by the 51st New York and the 51st Pennsylvania, who, with adequate artillery support and a promise that a recently canceled whiskey ration would be restored, if they were successfull, took the bridge after a gallant charge.

The tough Georgians had cost the Federals more than 500 casualties, giving up fewer than 160 themselves. They had stalled Burnside's assault on the southern flank for more than three hours. 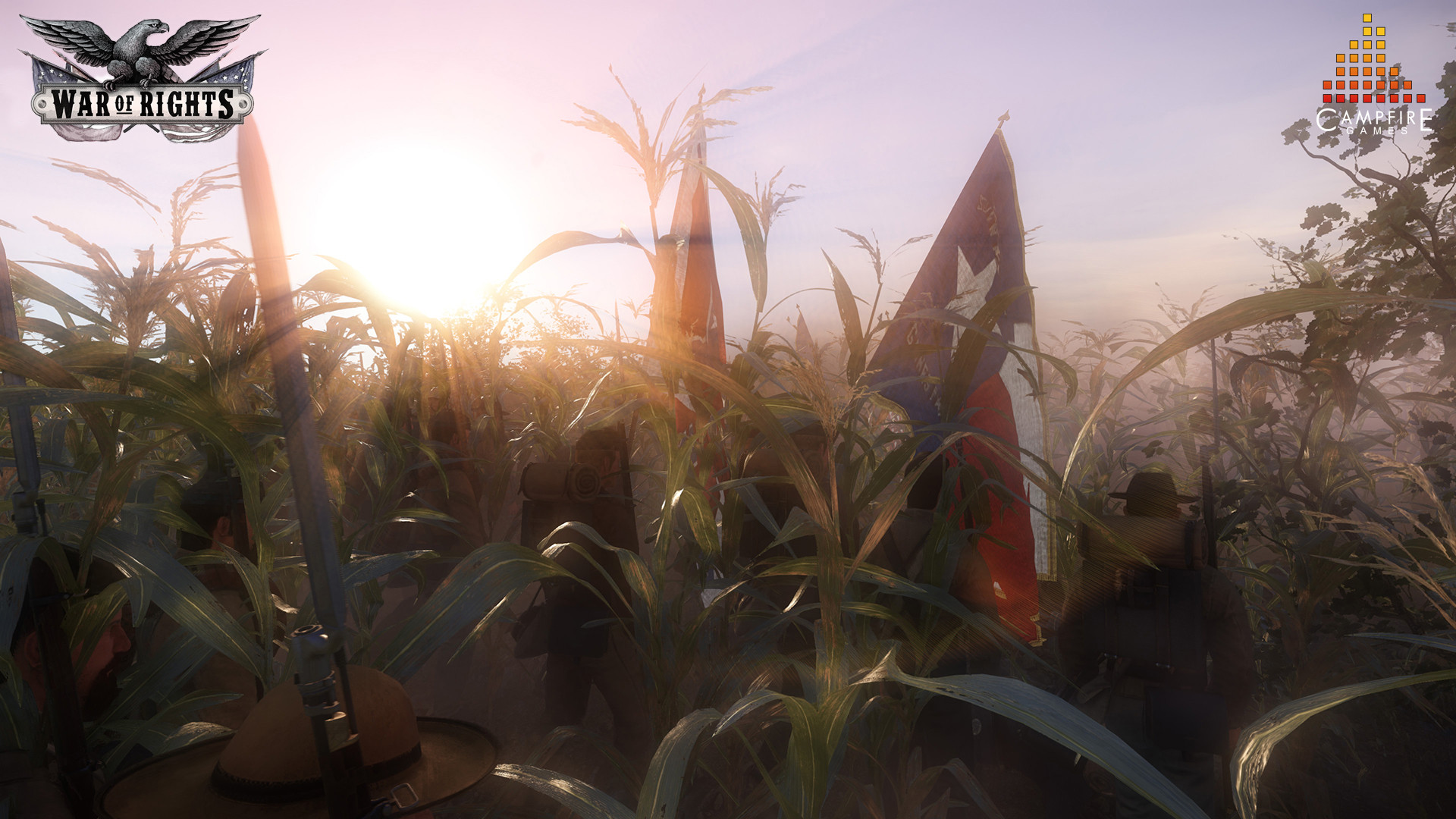 Advancing with the Texans

On the morning of September 17, the Lone Star soldiers of the Texas Brigade launched a ferocious assault through Miller's cornfield, driving Federal units before them. The attack eventually foundered in the face of intense artillery and musket fire. The Texans stubbornly attempted to move forward, but massive casualties decimated their ranks.

The First Texas Infantry, advancing the farthest of any unit in the brigade, suffered a casualty rate of 82% of the 226 men engaged in the battle. Beside the loss of their regimental colors, the “Ragged Old First” casualty rate at Antietam was the second-highest of the Civil War on either side.

We must pour money into this dammit.

My wallet is ready.

Sorry family, my Christmas present budget is going into this. I'm already collecting all the money i can. Even starting a small fundraiser at my school

We need to spread the word quick!

good luck to you guys \o/