We have some really big announcements for our latest update. We’ll be talking about our latest build, in-game map improvements, new partners and assets, and a run-down of our latest Twitch stream.

Posted by ScrapingBottomGames on Mar 15th, 2016

We’ve been working very hard to fix bugs and make the tiny improvements to polish our game (things like audio balancing, texture improvements, enemy spawning issues, to name a few) and it shows; Fictorum is now stable, playable, and pretty fun! We’ve sent our build out to a few of our fellow gamers to get their feedback on how our game feels and how it performs on a variety of machines, which will make the game all the better.

We recently realized that our world map, which was previously 2D, had a long way to go visually before we could call it complete; The game map is a pretty important part of our game, so it deserved an overhaul.

We’re very happy to announce that we have signed a contract to work with Rainfallto do our sound effects, music, and UI for our game! As they have been involved in a variety of high-profile projects, we are thrilled and honored to have the talent and experience that they bring to the table.

Our first stream started a little bumpy—we’ll make sure we have our audio set up correctly next time—but it was a success!

We’ve improved the look of our item and rune tooltips so that their statistics are displayed cleanly and in a more appealing manner. 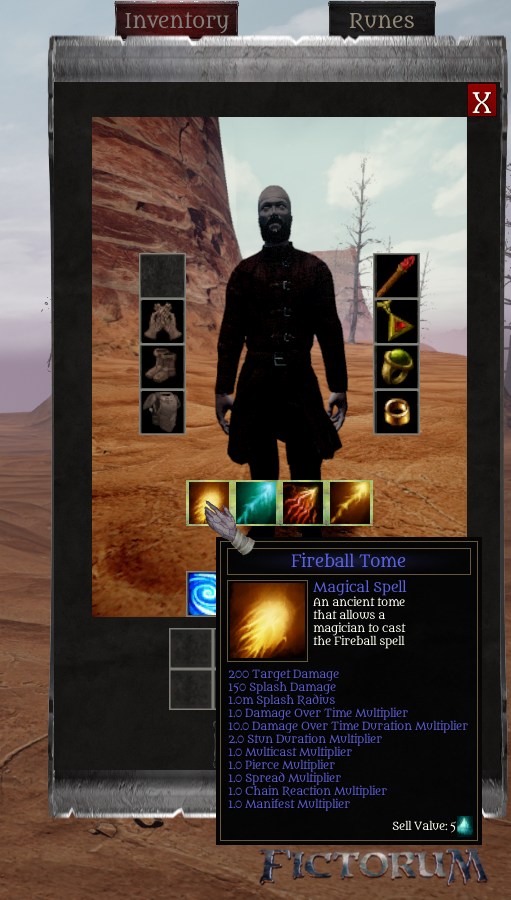 We are planning our second stream for Tuesday, 3/22, at 8pm PDT on our Twitch channel—give us a follow and tune in Tuesday night.

Tune in for our stream next Tuesday and we’ll send out another update in two weeks!

Here’s what we’re planning on working on in the meantime: