Building a computer game is like building a high-rise tower. We started by laying a firm foundation with our Map Creator and now we've just added a bunch of new floors. Our "tower" keeps on growing! Check out our latest build and take control of a feudum for yourself. Build new farms to feed a growing population, dig for gold or iron in nearby mountains or raise a castle to protect your feudum. The choices are yours to make. Choose wisely.

Watch an intro to the build here:

Feudums, a new game by 2Pence Studio continues to progress by releasing a new early access build which allows players to manage a single game feudum.

This build, second of five before the MMO is released, allows players to log into a working test game to get a feel for how it will look and work.

Feudums is a 4X cross-genre, cross-platform epic strategy MMO due out in 2016. Players take up the role as a Lord or Lady with their own feudum (Latin for fief). Activity in the feudum, such as planting and mining, as well as military excursions and diplomacy are all directed by the player. The game is free to play, and more importantly, free to win.

“Feudums, as its name implies, uses a medieval setting to create an authentic environment around the players,” according to Imre Darics, the game’s chief programmer. “Players are not isolated lords and ladies in the game world, but are living in the social network of their day. Nobody is born a king, but can become one through alliances and battles, intrigues and diplomacy.”

The partial game is available for download at www.feudums.com for free. The early access version is only available on Windows and Mac PC units. Once the bugs get ironed out and the build becomes more stable, additional platforms will be supported including Linux, Mac and Windows and Android and iOS tablets. The stable version will also be available at the Apple Store or at Google Play. 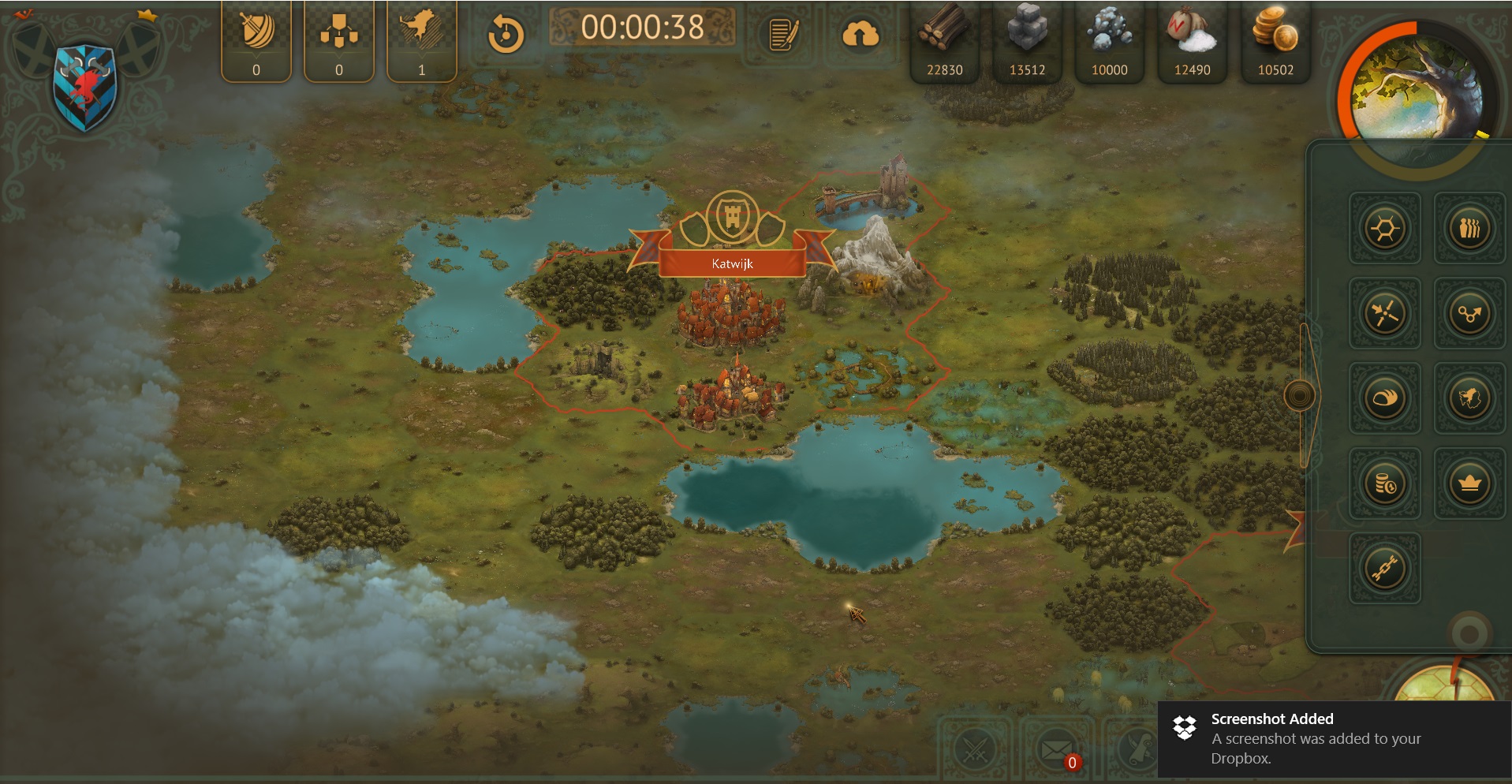 Feudums are created by consolidating a player’s lands which physically touch into an administrative grouping. To form, a feudum must have a manor house which can be built on a settlement or an authority-type improvement such as a keep or castle. For a player and the feudum, the manor house is the single most important spot on the game map. All the player’s activity originates in the feudal manor house and if you lose it, you lose control of the entire feudum. This makes the player’s in-game family home the heart of their feudal operation.

Players will have a lot to manage from their manor houses. Just as in real life, the fight for resources will take center stage. The game uses three main resource types: coins, materials and food.

Coins are the currency in game and can be gathered by mining and collecting taxes.

Materials are the medieval basics: lumber, iron and stone. Lumber is cut from nearby forests, iron is mined and stone is gathered in quarries. 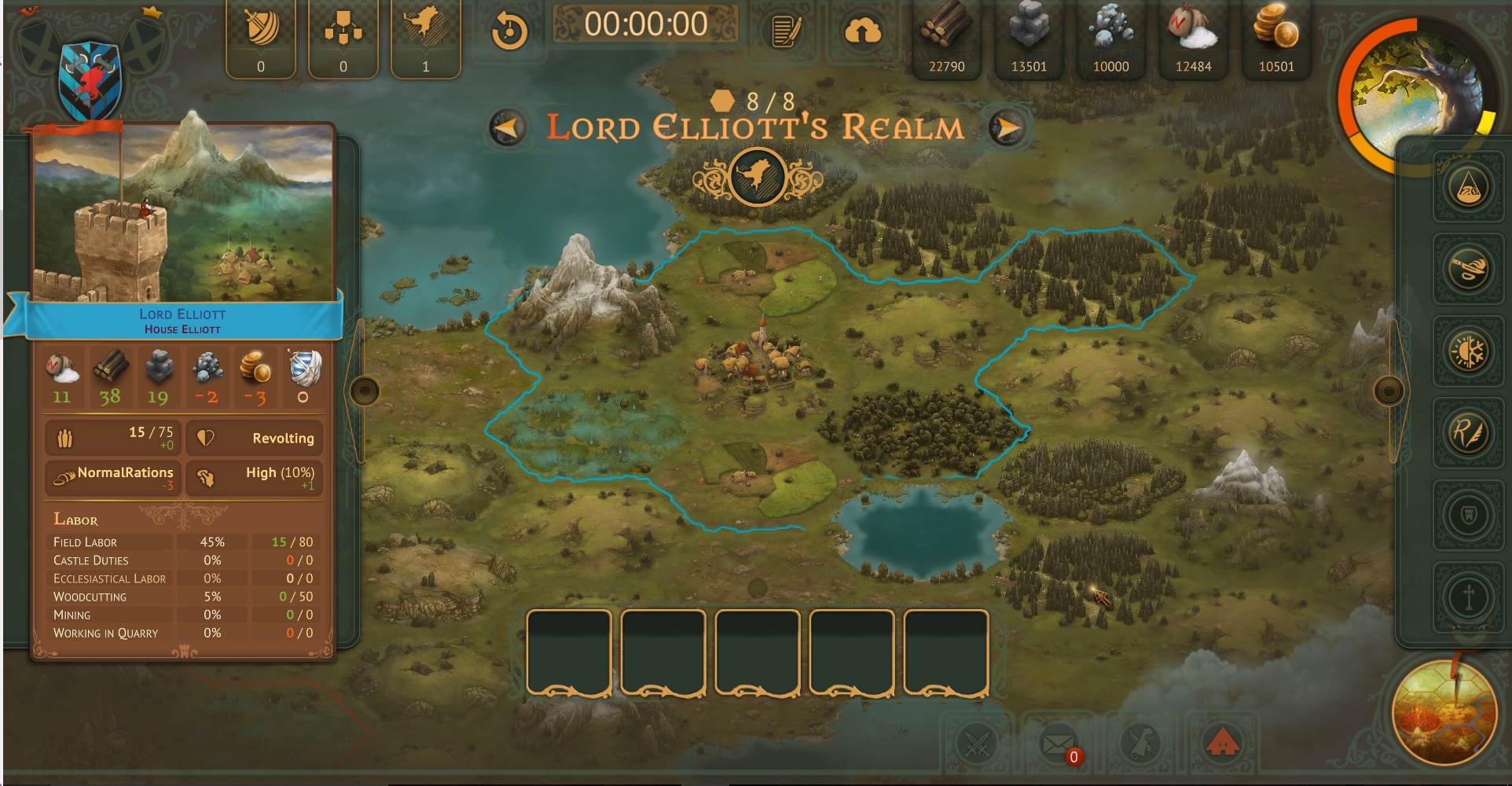 Lastly, food plays a huge role in a feudum’s well-being as you might expect. Food is created by working farmland and tending livestock. Food is the basic building block of a happy and growing population.

Adding complexity to the game are the actual seasons and their effects on the world. Budding kings need to manage their food supply to keep their population fed through the winter months. You must have field hands planting wheat in the spring and not off fighting in a military campaign. Players will have to learn how to walk the fine line on allocating resources: Is gathering stone for the castle improvements more important than building up your wood or food stores? Be careful! Build up too much food storage and watch it rot away.

As players conquer new ground, they become responsible for it. Newly conquered land is always an expense. Land will eventually begin producing revenue when it is incorporated into a feudum and developed. This system ensures slow, steady growth.

“You won’t see a mad rush to gobble up land at the beginning of the game,” Darics said. “It’s a completely viable strategy to expand at a slower pace although I’m sure other strategies that work just as well will evolve.”

One of the best features of Feudums is the ability to bring vassals in to help you. Once your lands have grown, you can “give away” a part to a vassal. The vassal pledges allegiance to you in return for the ability to manage their new feudum. In effect, he becomes one of your “banner men” as made popular in the hit HBO series, Game of Thrones. Because of the game’s social media integration, you’ll be able to reach out to your Facebook friends, for example, or shoot other friends an email asking them to join you in game. 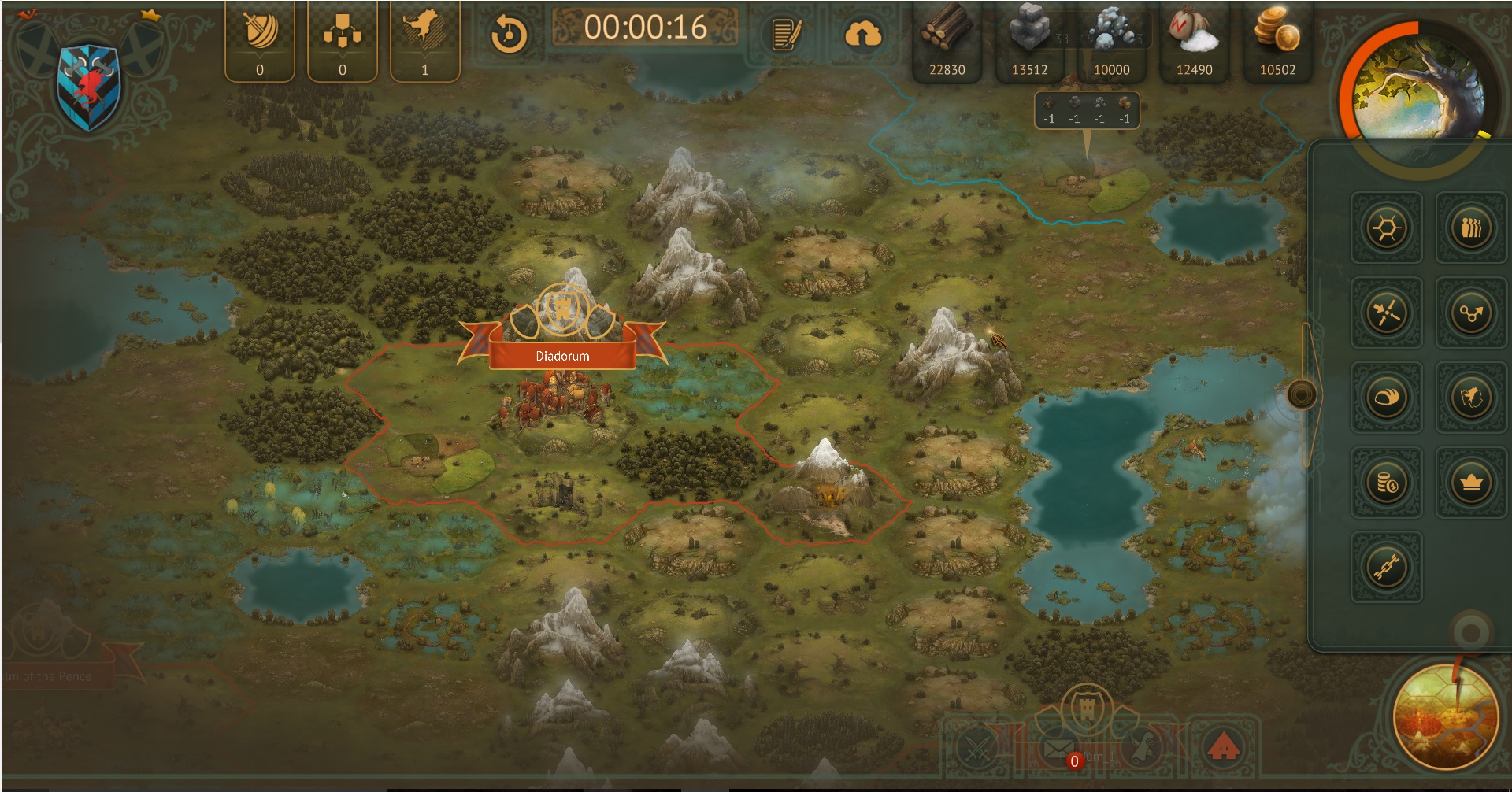 But vassals don’t necessarily need to be friends. As new players join a game, you may approach them about becoming a vassal to you. This win-win allows you to part with some of your management duties and gain an ally while giving the new player some protection while operating under your powerful umbrella. New players may also find it beneficial to become a vassal in order to have time to learn the game by cooperating with someone who has been playing it longer.

“I think you’ll see new and casual players offer oaths to more advanced players, for both protection and tutoring,” said Matyas Suranyi, the game’s designer. “Having vassals comes with a lot of benefits for a developed dynasty, so no doubt we’ll see experienced players offer counselling and protection for a player’s loyalty.”

One of the biggest challenges to 4X players is the amount of time spent doing the boring “chores,” such as food and resource gathering. Feudums has built in autonomic units which can be given their chores to do and will keep doing them even if you are offline.

“These units can react to changes in the environment,” Suranyi said. “A unit can guard a settlement and wait until another player attacks them or can patrol an area and step up against an invader. The workers in a feudum will follow the changes of the seasons and chop trees or plant or harvest depending on the time of the year. But you can, of course, always fine-tune or override these behaviors.”

And the best part? These premium-sounding features are all parts of the game for everyone, as Feudums is a free to win game. There are no units or items you’ll need to purchase to have a chance to win the game. Every player will have to use their personal skills and solid gameplay to make it to the end.

Currently, Feudums is releasing their game builds one at a time in order to allow gamers a chance to become acquainted with their work. Each release adds to the game world like adding additional floors to a high-rise. “Our releases build upon each other,” Suranyi explained. “Economics before diplomacy. Diplomacy before warfare.”

But the 2 Pence team is open to player’s concerns about the game too.

“We’re gamers ourselves, and we’ve created a game that we would want to play, but it doesn’t mean we’ve done it all correctly,” Suranyi explained. “Gamers who back us and become fans have a say in where we’re going.” 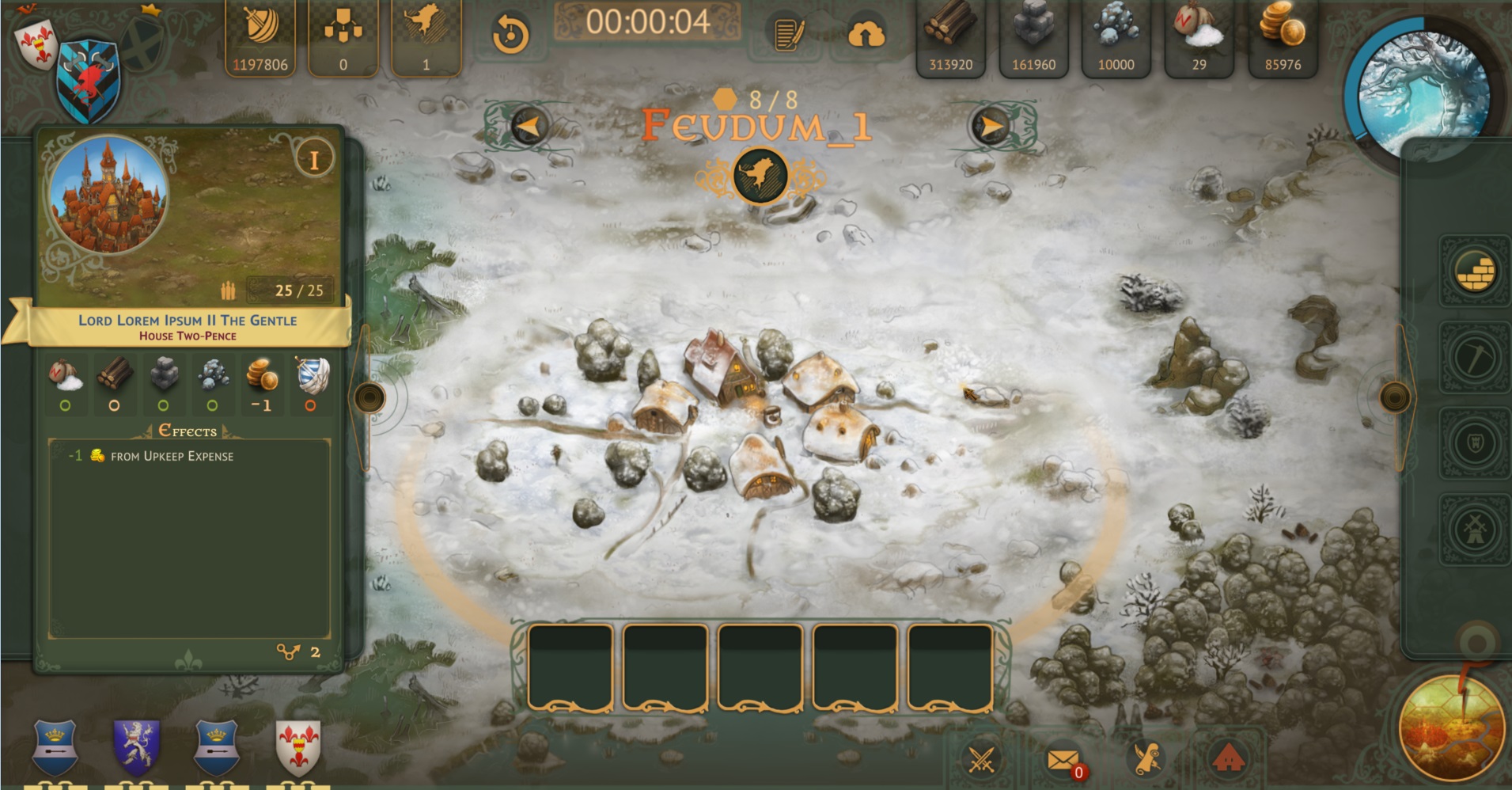 Feudums is planning a crowdfunding campaign in early 2016 to raise funds to finish the game. “We had early financing which allowed us to get to this point, but we’re going to need some help to make it across the finish line,” said Mark Elliott, the studio’s marketing manager.

“We’re hoping we’ll have enough backers to get us over the hump. We’ve got some great ideas for potential stretch goals,” Elliott continued. “Obvious things like tile improvements and additional graphical packages but also some cool ideas like changes to a fantasy or steampunk world setting in the MMO game, troop customizations, or a more detailed sabotage and kingdom management system.”

The just released single management build will be followed by multi-feudum management, diplomacy and warfare builds to round out the MMO.

“Think of Feudums as a mashed-up version of Game of Thrones, Tribal Wars, Civ, and if you’re old-school, Defender of the Crown. It’s got the best elements from each of those plus a few more. I think everyone will have a great time with it,” said Elliott. 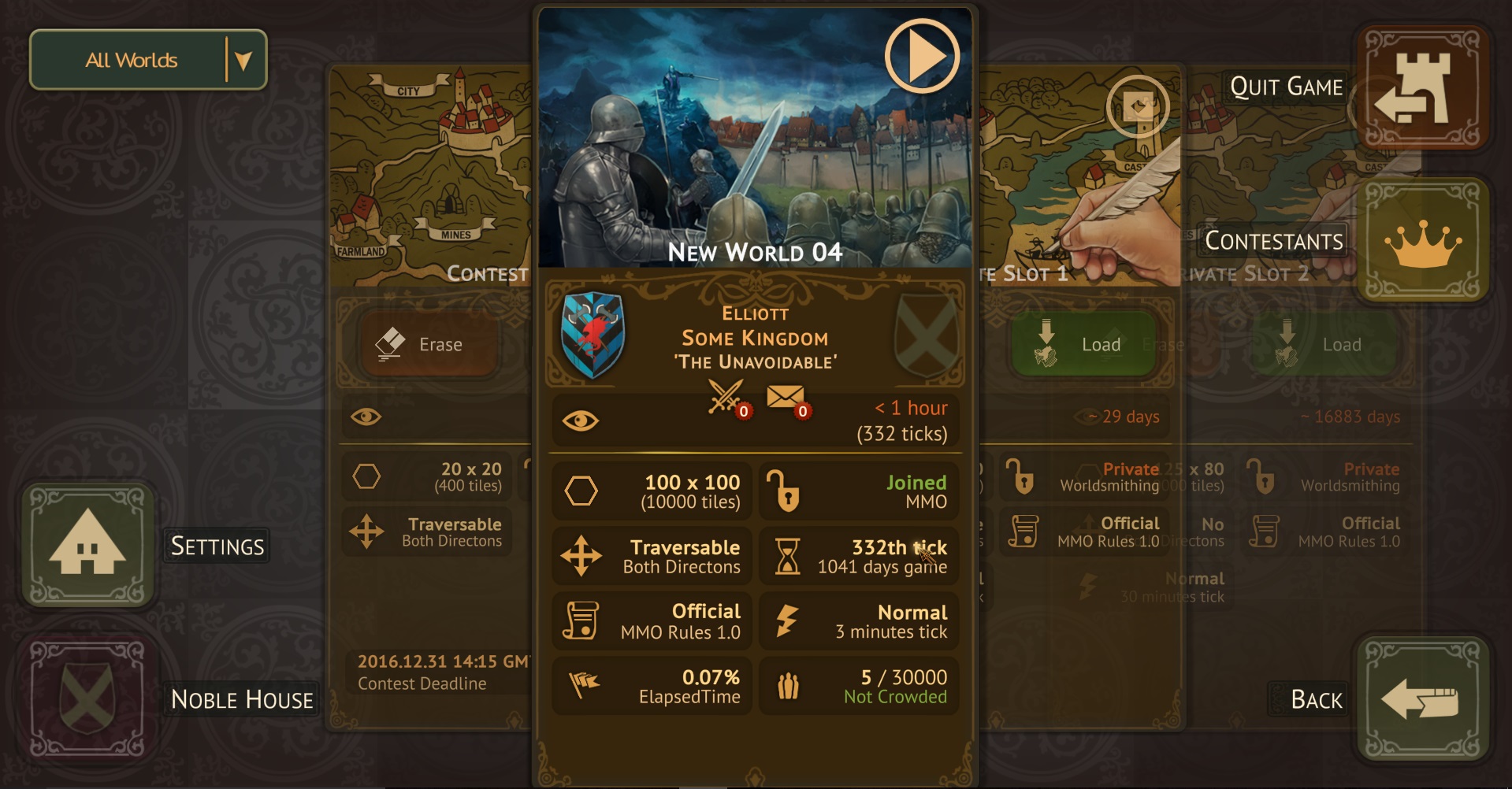