Here's our latest update for our upcoming game The Pedestrian. Read about what happened last month.

Hey everyone, welcome to the newest installment of The Pedestrian Monthly Update! Wooo! We’re making progress on the last portions of the game, while also continuing with our playthrough sessions. These have been invaluable for us to see any faults in our game that we’ve become blind to, as well as being a great source of encouragement.

As per usual, we have an update video for you to get your eyes on! It contains all the info from this text update, but in a conveniently less texty format. Check it out below.

Here’s our monthly progress graph containing all our area progress. The red parts are improvements since our last update. 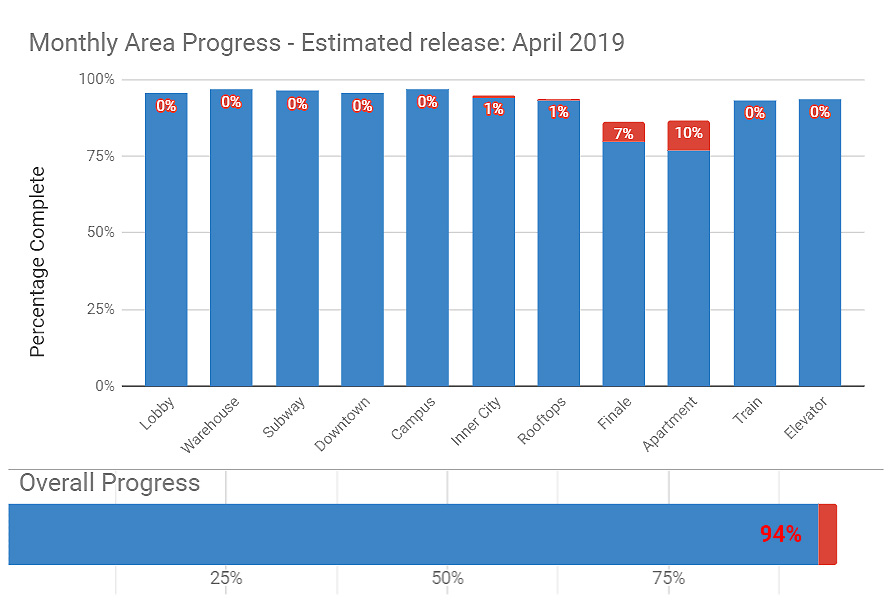 One issue we’ve come across while doing playthroughs was a dead spot at about the midpoint of the game. This occurred because players were used to learning new mechanics in the early portion of the game, then it slowed down at the midpoint and picked back up later in the game. So to remedy this midway sag, we added in a new puzzle mechanic, and labeled it Depth Portals.

To support this new mechanic we created 6 new puzzles and a couple tutorials, and scattered them around the midpoint of the game. This should keep everything fresh and interesting throughout.

The Apartment, Finale, and Inner City received their paintovers this month. That wraps up the visual content pass for the game! Next passes will be faster as one will be on lighting and color finalization while the other will be for story elements.

After each of our playthroughs we have multiple sheets of notes with comments, bugs, and suggestions. These end up making their way into our task manager for us to claim and complete. So dozens and dozens of small improvements to puzzles, navigation, visuals.

Here’s a little selection of assets Daniel has created during his paintover pass. A guitar, lawn chair, some clothes, and a notebook.

Our next main steps are finishing the ending’s functionality, implementing audio, and adding in our story elements.Thanks so much for all the continued support!