Hello! A quick update about the decisions we made after the Alpha-tests.

Posted by FarathanStudio on May 4th, 2021

a quick update about the decisions we made after the Alpha-tests.

We have made the world again(from scratch) - using the old one as a prototype and working 15 hours a day - made it possible that I have almost finished it in a month. I will show you some screens.

- No locations for the sake of it.

That means that I have deleted all empty spaces. So everywhere you can go something waits for you - a cave, a lake, some items, monsters or a npc. So no making the game longer with big areas that exist just to take a walk in them. That should encourage even more to explore the world.

The new game world is designed in such a way there is content almost every 15 seconds of walking. With content, I mean cool places to discover (like hidden caves, areas), treasures and items, npc to talk, quests or a monster to beat.

This time I talk about exploring - because our quest lines are full of choices that can change your experience completely - like choosing a guild, picking who has betrayed you, which gang to support or more simple stuff like to be rough on a farmer or help him. Many even simple choices lead to a different quest line later.

But the new map brought choices about exploration 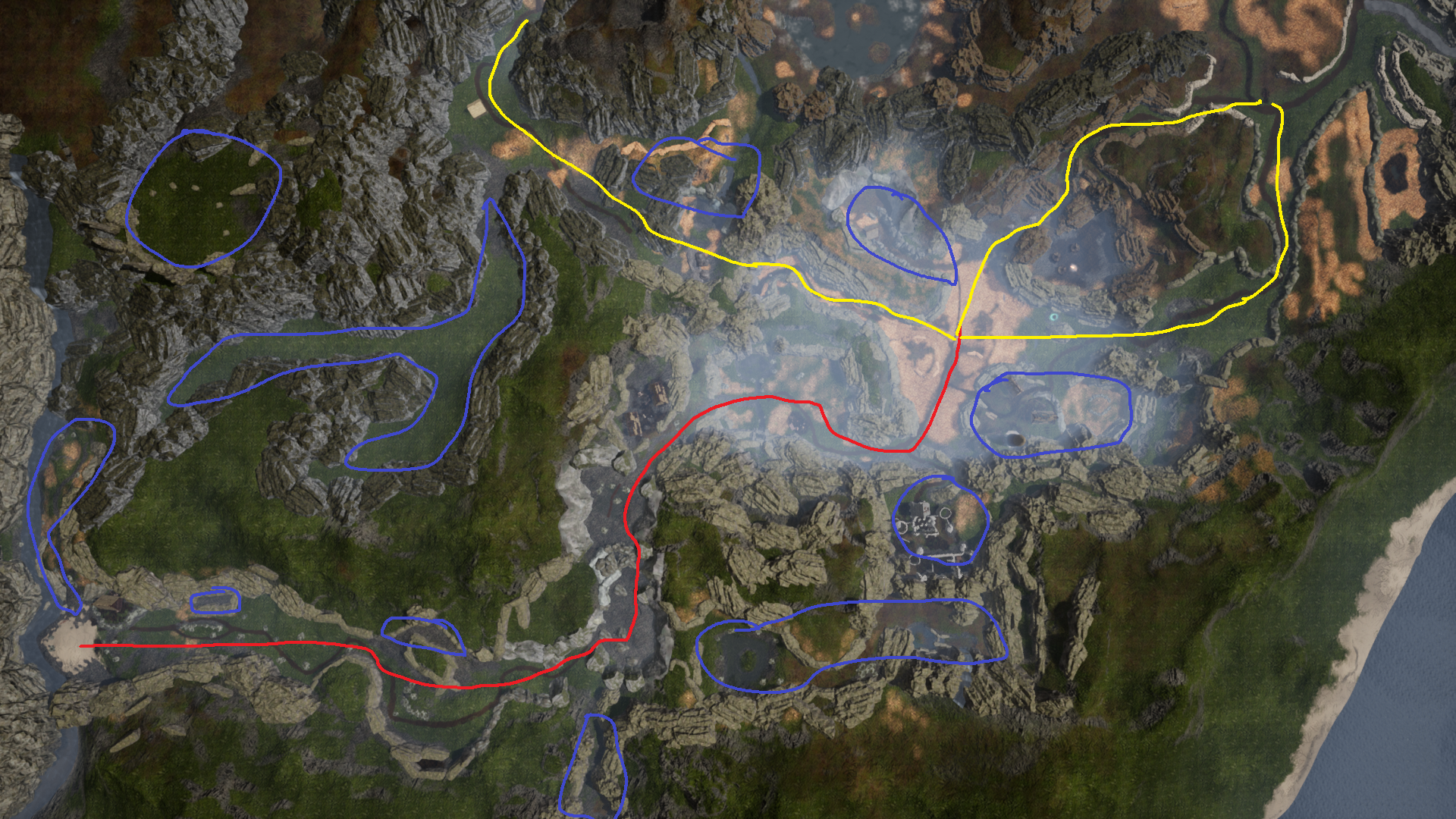 So the red line is the path the main story puts you on. The yellow paths are different ways to make the main quests. And the blue areas are the additional content you can find or make during your journey. The location you see here is like the way from Xardas to Khorinis. So the very beginning of the game.

Better graphics overall - but still truthful to our muse Gothic

No more stretched rocky texture everything is covered with natural rocks now. I have also put a lot of time in tweaking items, so they all look in a certain color scheme - fitting together. Of course games according to American law are art - so it is often about someone's taste if someone's likes it or no. I like the pictures below very much and to tell the truth the game looks 100 times better than I excepted when I started to build it 10 months ago. 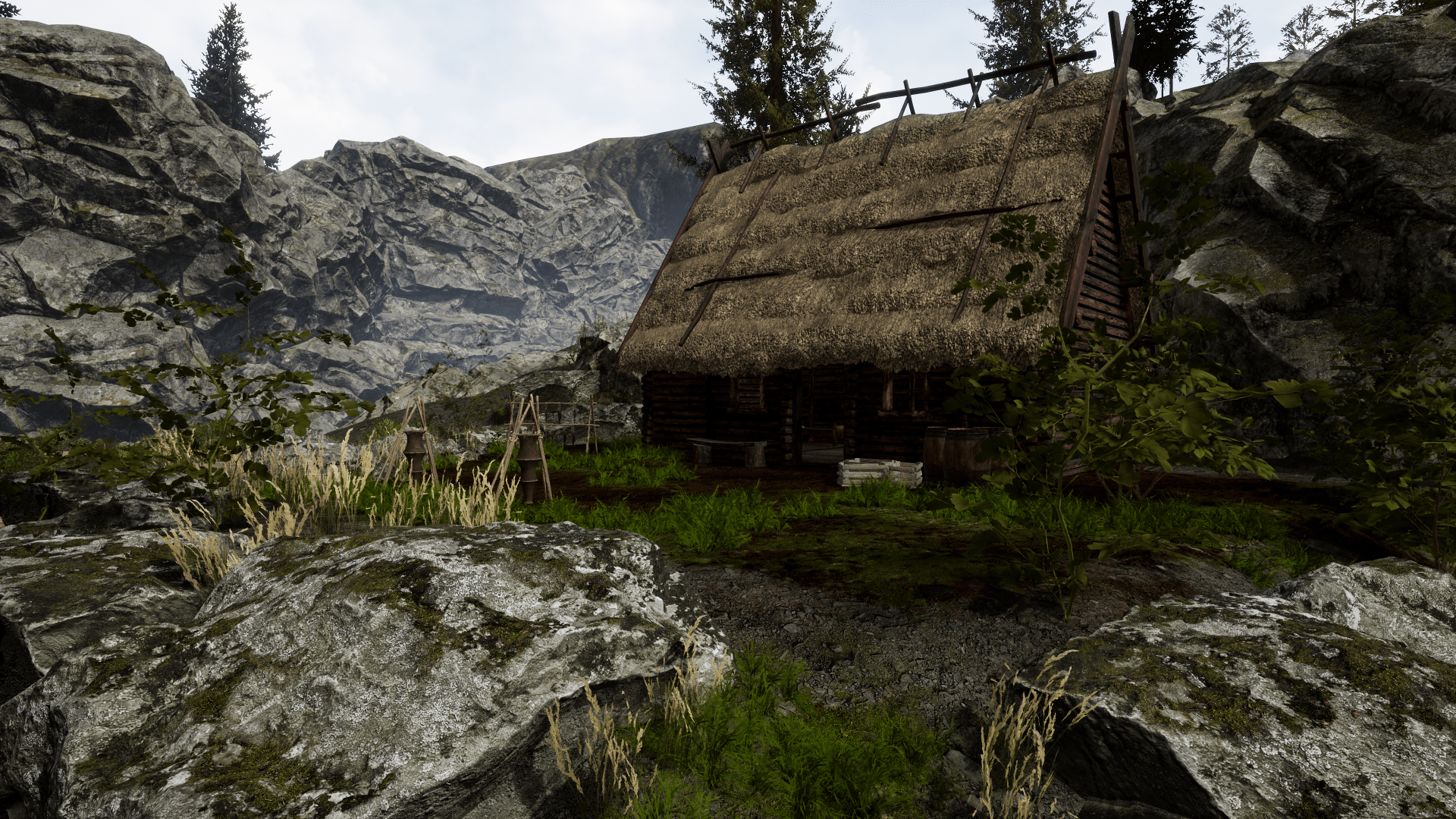 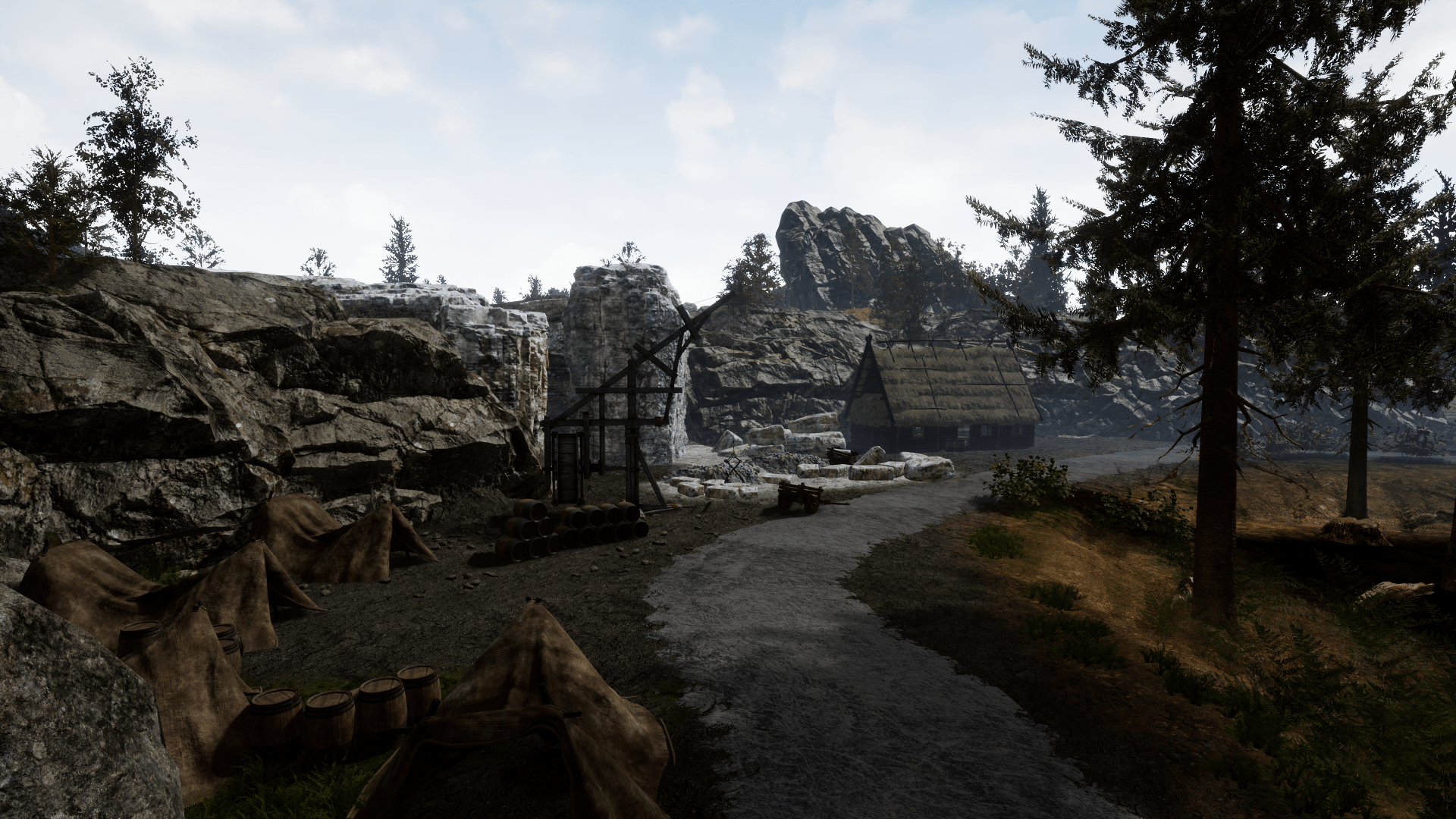 Much better castle and temple ruins

For that I have to thank mainly two people.

1. Theophilnerd - He designed our new holly places, so they have a theological story behind them now and make sense in an architectural way. He is a theology passionate(almost has a PhD) so was much fun to work with him. The green spaces have grass and flowers all over it but from that distance the optimization kicks in.

2. For the castle I have to thank, the team from Manastion that provided an epic update with new walls and towers. 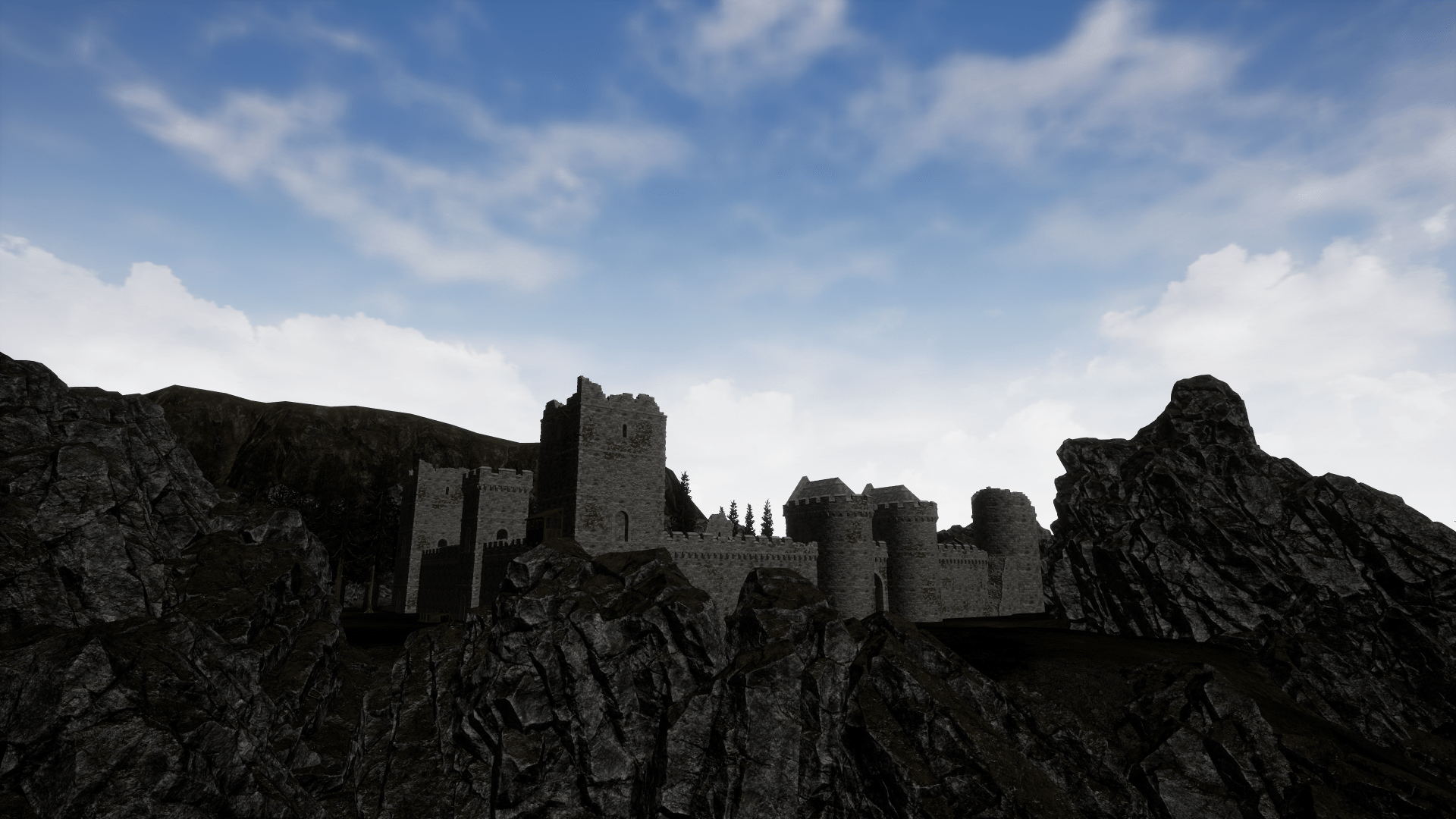 Locations designed to make you mad

Well analyzing who is interested in our game made it clear that you are almost all hardcore gamers with 10-20 years experience in playing. Missing games that are challenging but not in the way that you have just to click more. So we made our "mining valley" much more demanding in the aspect of terrain orientation. So tons of changes regarding the world and the graphics. On the end I will post some more photos from the world.

We will present all our fighting styles. That is close combat, magic and distance fighting may/june

But without the movie parts. So characters visible from the waist, with emotions on face, not many gestures and nice but dead eyes. Main hero talking and visible during talking. But we will use the Gothic style dialogue line picker or however this is called. The circle in horizon.

As promised we are working on the English voice over. Catch some samples. No context so no spoilers ;)

In a week I will finish the new world. Then I move on to add sound to it, then populate it with items that you can pick up, than the npcs and they daily routine, and on the end the monsters. In the current speed I have, I think everything will be ready around August. And we will be able to make some new cutscenes, trailers and start adding the logic to the quests.

Work on the fighting system for now. Then she will move on to fix all the bugs you have found in the alpha tests. So around July we will get a hidden beta demo on steam. For you to test.

Thank you for your time and see you in a month. Ah the screens... 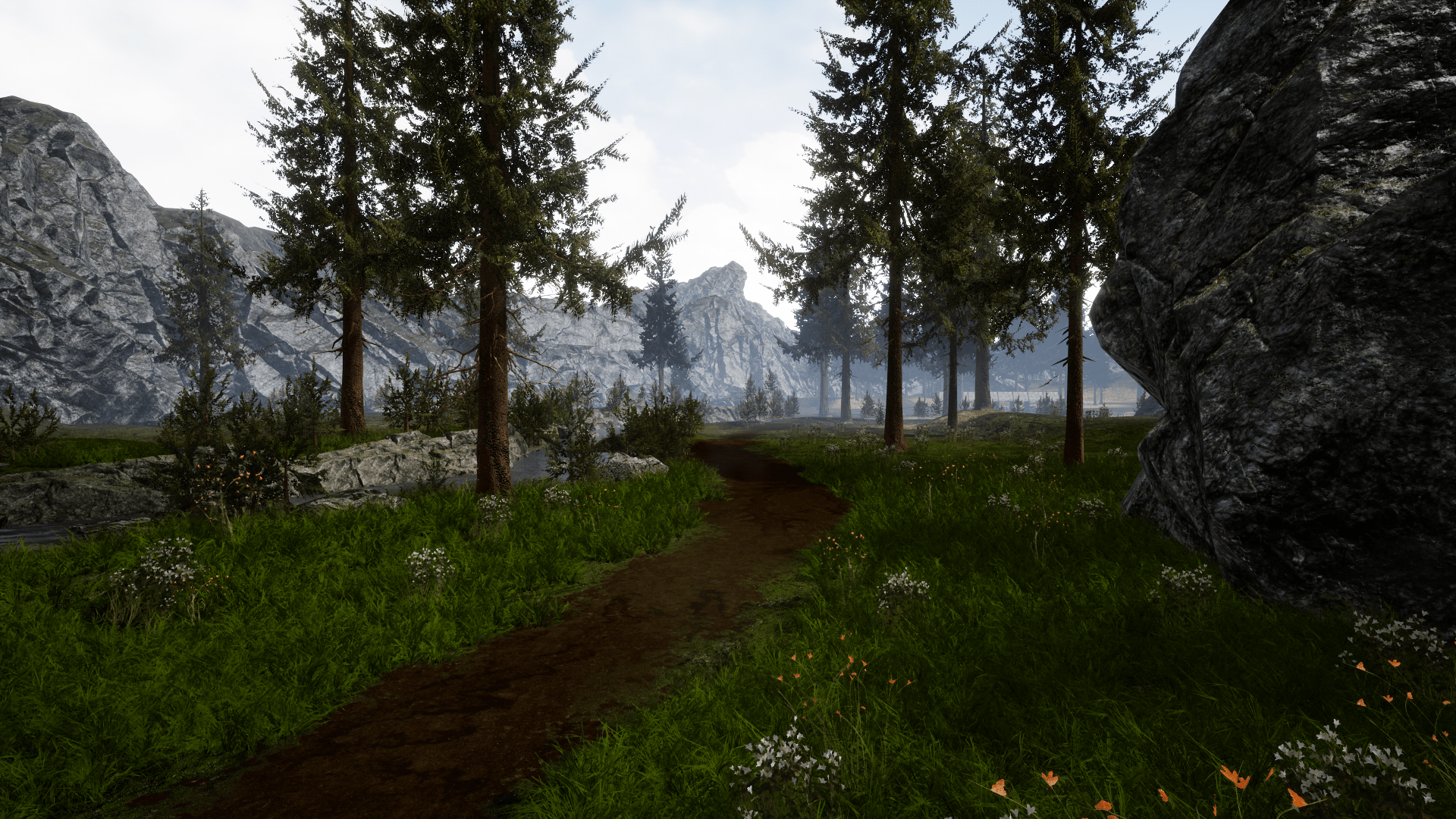