It's a long road ahead to make VR headsets that subtle.

Zuckerberg began by sharing a broad roadmap for Facebook's next ten years. This roadmap showed the company's developments in Facebook, Messenger, live video, and artificial intelligence. Included at the end of that ten year roadmap were developments in VR and AR, which Zuckerberg summarised by saying the company wants to create a VR/AR device that looks like an ordinary pair of glasses.

But, as UploadVR has found, developments toward this ten-year goal may already be well underway. At 2015's Oculus Connect 2, Oculus Chief Scientist Michael Abrash shared additional technical details on what these theoretical VR/AR glasses would be capable of. 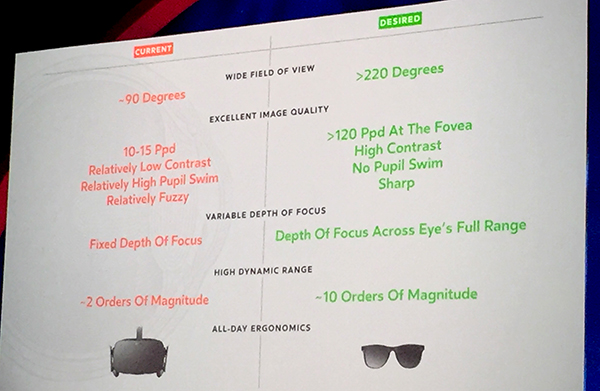 Facebook's goal is an ambitious one. The company's Pittsburgh research office, which is focusing on "facial tracking and body reconstruction", is likely involved in the effort. But as Oculus CEO Brendan Iribe has put it, "There isn’t a version two or three if there isn’t a great version one," and we're yet to see solid data showing just how successful this first generation of VR adoption has been.