Post news RSS Exploring and Crafting from a New Perspective

This is more of an action RPG than a constructive block world game. There will be deep RPG mechanics, and there won't be any survival elements to weigh down the experience. The focus is all on growing and building your character, although you still can make yourself a den or a fortress and invite NPCs.

From screenshots you might have seen, this appears to be a 2D top-down isometric game with a lot of implied depth in the tiles and pixel art. However, it is in fact a 3D block game, rendered live onto 2D tiles which make up any particular scene. Character sprites have to be sorted to appear above and behind the tiles correctly. If you don't pay too much attention, it may start to feel like a 2D isometric game as you continue to play.

The primary difference between LandTraveller and most games in the new block world genre (pioneered by games like Infiniminer) are the deeper RPG mechanics. It isn't simply a grab for better equipment you found in abandoned structures or what have you, and you will be able to grow and build your character to fit your play style. LandTraveller sets out to become more of an action RPG in this regard than a creative block world game. 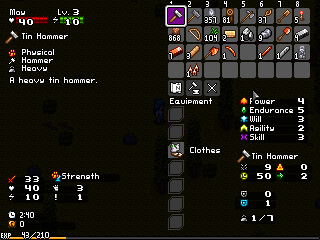 That isn't to say you won't get the opportunity to build yourself a den or a fortress and be creative. There is plans for you to be able to invite NPCs to live with you from a list. These will be randomly generated and each NPC will have a job you might find helpful. Most if not all the side-quests given in the game will be from NPCs like this who request their place be built a certain way, etc.

Another simpler, important point in LandTraveller is the downplaying of what I liked to call "minegrinding". In other games, it can get very repetitive as you dig constantly to get metal you need to craft gear that will shortly become obsolete anyways. In LandTraveller, the ore is easier to find and you only need a little if all you wanted was better gear.

There won't be any survival elements or zombies. Your inventory won't fill up with dirt blocks (thousands will fit in one slot) and you wont have to cram your face with food every five seconds. This is going to be a lot more like a classic console style action RPG.