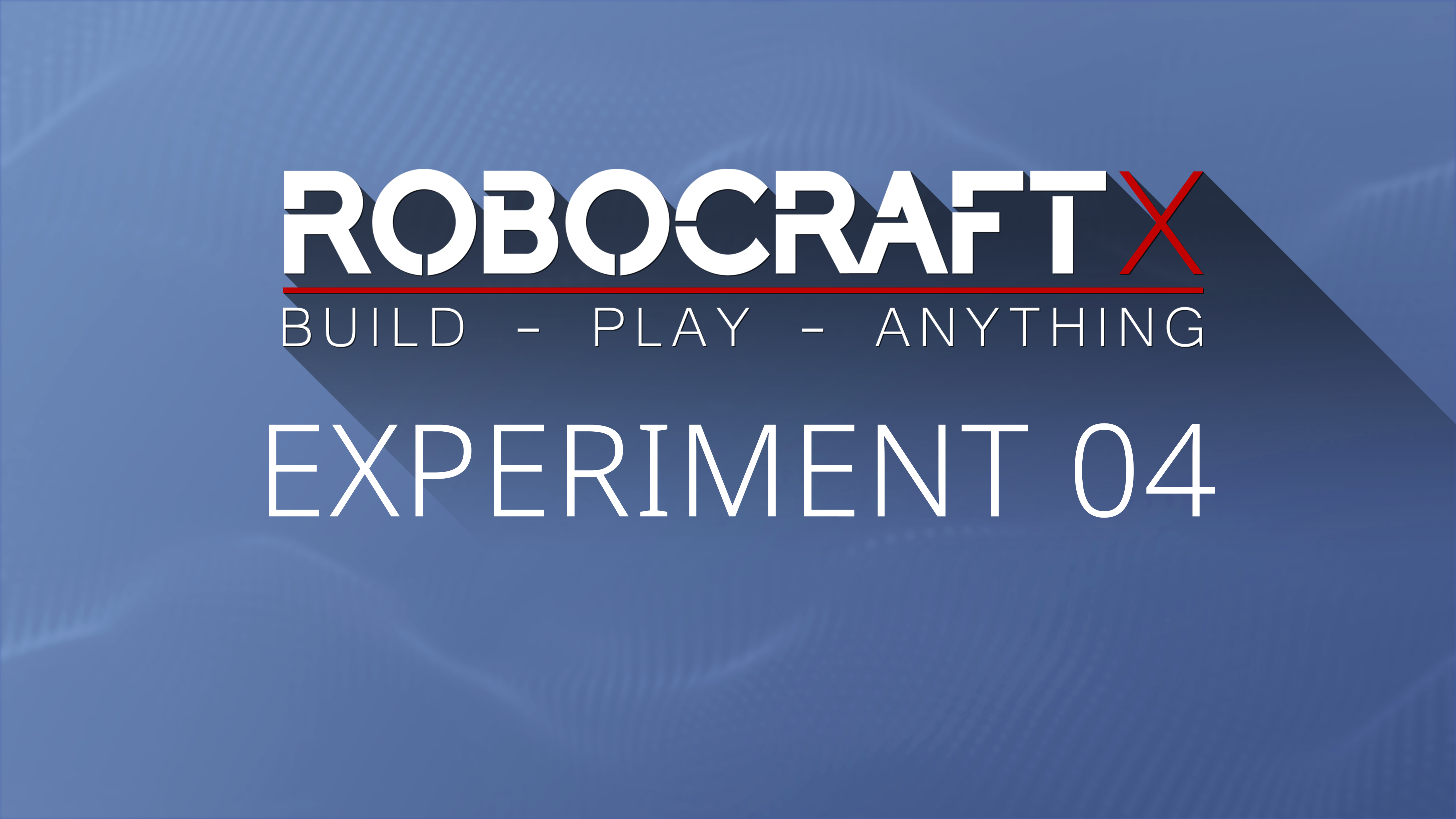 We have yet another massive update for you all! First of all we’re officially switching from unlisted to listed! This means that RobocraftX will now appear in store searches and generally be easier to find and share! We’ve still got a long road ahead to Alpha and beyond but thanks for supporting us this far and we hope you continue to enjoy this journey with us. Here is the full rundown of everything new in this experiment!

Saving & Loading
The first pass of saving and loading is here! It is now possible to save your progress while in “Build Games” mode. Saving will automatically happen whenever:

You will also be able to manually save your build when you quit the game via the pause menu.

In this experiment, only one save will be written to. This can be found under “RobocraftX_Data\StreamingAssets\Games\Player” however, and can be copied/renamed to allow for multiple local save files! We’re hoping everyone will create some amazing things and upload/share their saves while we continue to work on cloud saving/loading. We’ve even written a guide on how to do this! Save and Loading Guide.

Speaking of loading; any time you enter the “Build Games” mode, you will load up your current save file and carry on exactly where you left off. If you are keeping multiple save files in the Player directory, you’ll need to make sure the one you want to load is first alphabetically.

There is also a new “Play Games” mode in the main menu. We’ll cover the new menu flow below but the TL;DR is that in this experiment, this new screen will allow you to load up any local save to play around with! 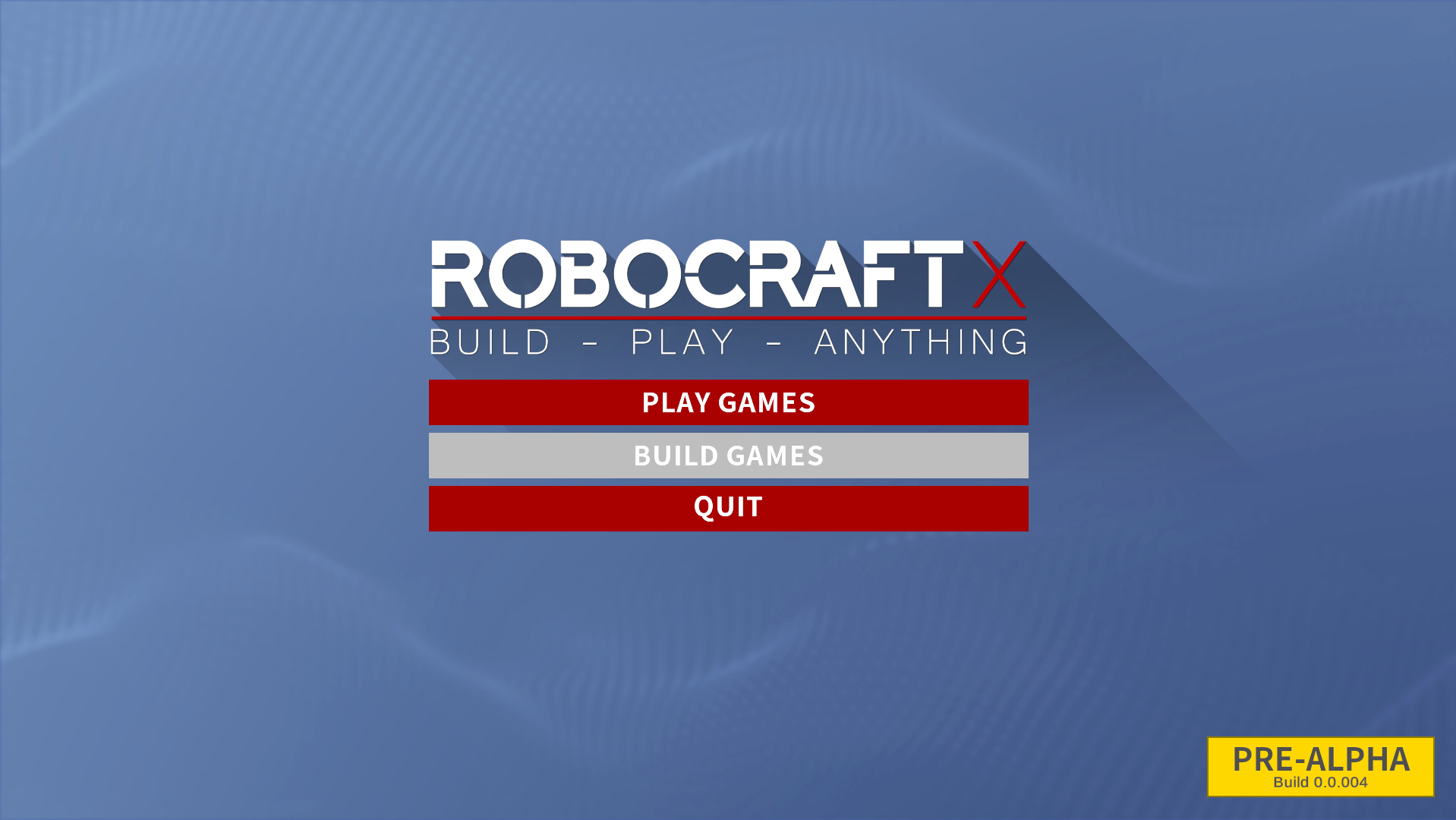 The Build Games mode works exactly the same as “build mode” in previous experiments. Instead of loading directly into an empty world each time you load up the client, you will be able to click this button to load your current save file and continue building where you left off. All of the current inventory parts are available in this mode and can be used to create amazing games, cars, contraptions; you name it! 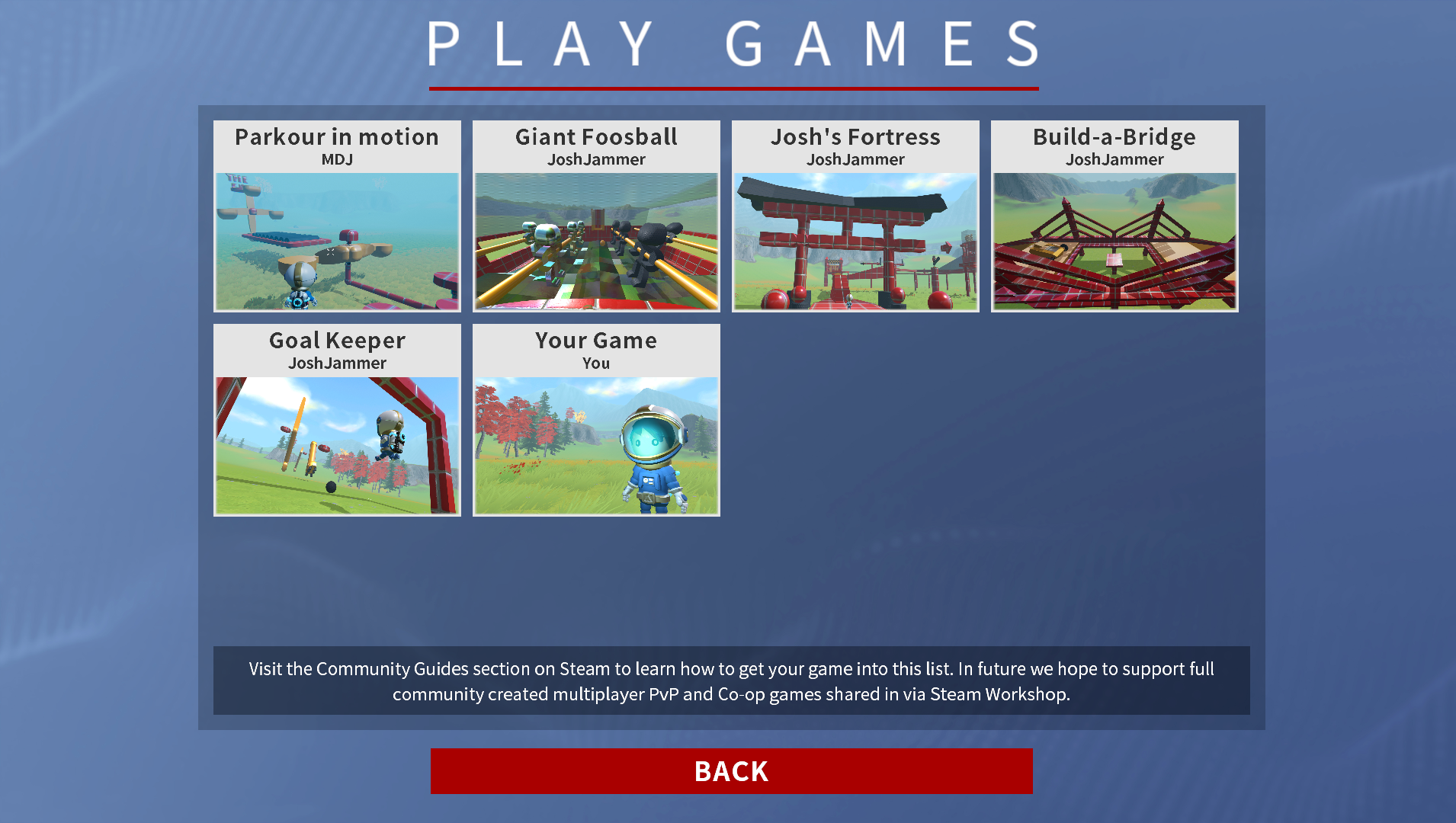 Play Games is the start of our UGC content sharing platform where you will be able to download and play game modes from other experimenters. In this experiment, the Play Games mode will allow you to view all of your local save files, with a bunch curated by us, in a neat little grid. Each game mode will have a name and thumbnail. Selecting a game mode will take you in for a more detailed look. 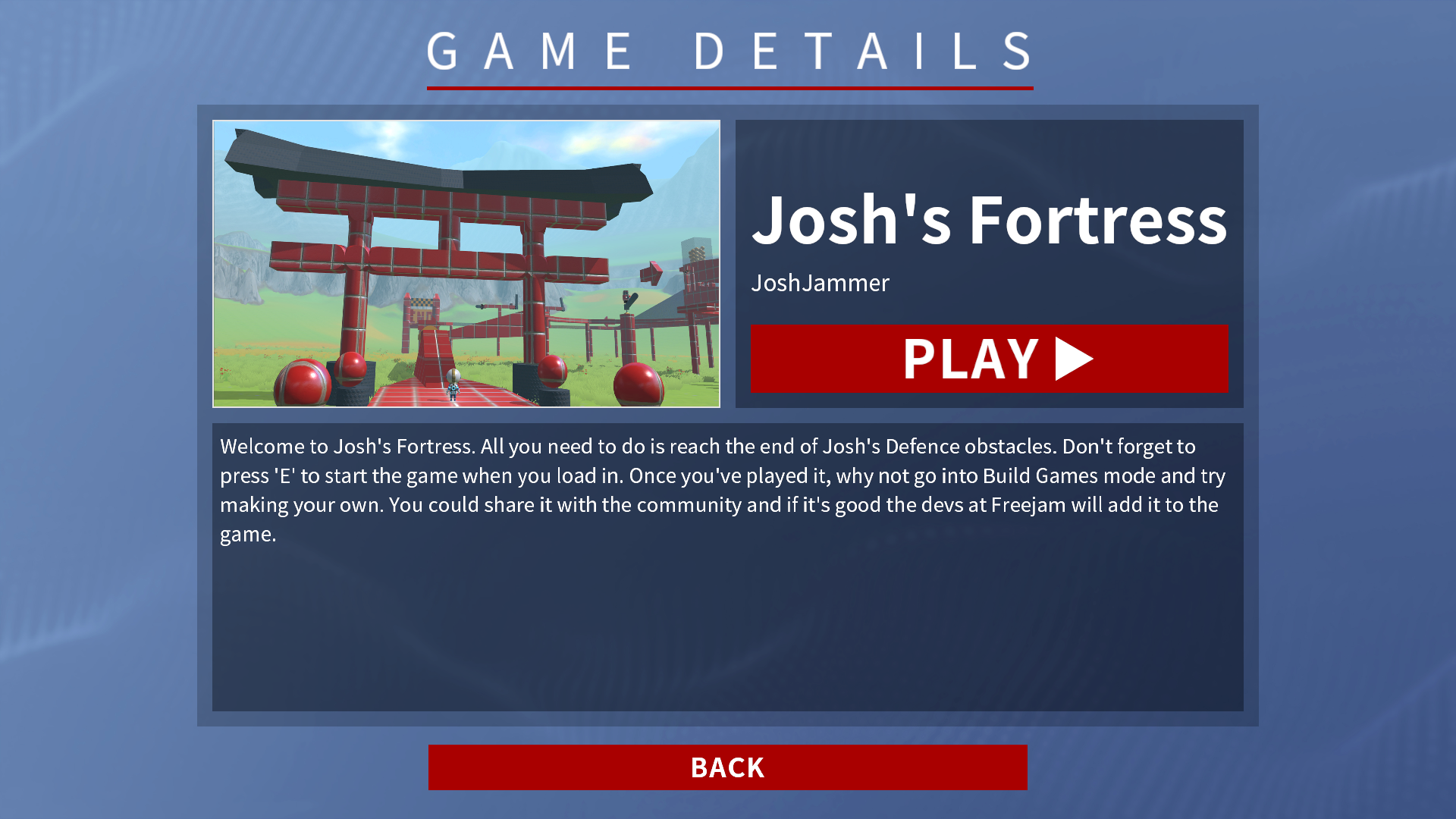 From here, you can click PLAY and get right into the action. There are a few big changes in Play Games mode and we’ll cover some of the finer details as we go! The biggest changes are:
Certain inventory is restricted to Build Games now, such as Infinitum
You can only build within certain areas of the game (we’ll cover this in the next section)
Parts that are already present cannot be removed (we wouldn’t want you to destroy the game world) 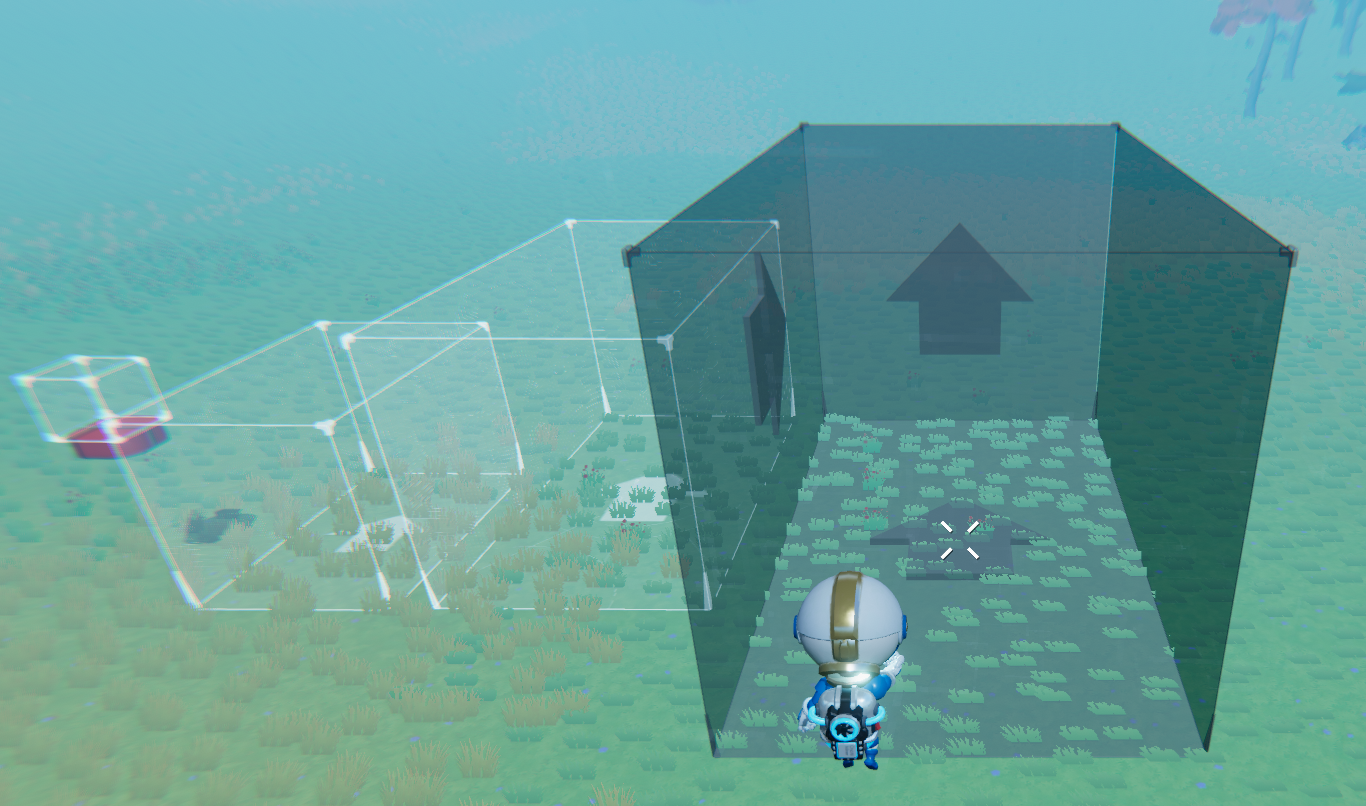 Spawn Points are here! These unique parts can be placed like most other blocks. Spawn Points are one of the first ways of setting up “rules” for your game modes.
If a Spawn Point is present when a save is loaded through “Play Games”, then Leo will appear inside it. As long as you are in stasis, you will be confined to the Spawn Point and will only be able to place parts within its boundaries. As soon as you leave stasis and enter “play” mode, the Spawn Point will dissolve and the simulation will begin! Returning to stasis will place you back in the Spawn Point with your creation.
Spawn Points currently come in 4 sizes!

Any building or changes done in Play Games will not be saved. 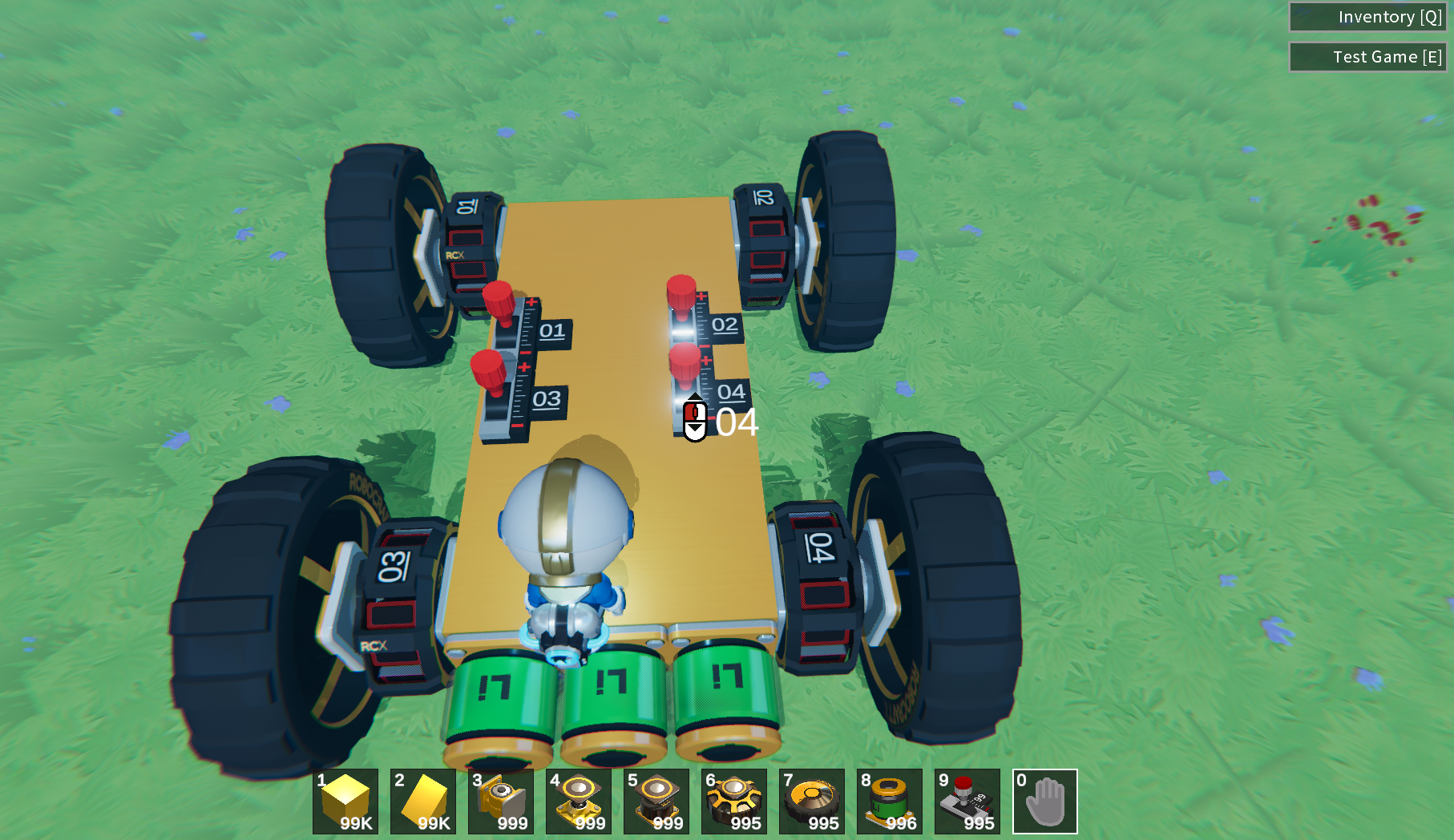 While conductivity is an extremely powerful tool, we understand that things can get a bit confusing and complicated when you have to rout power and signals with non-conductive blocks through larger builds. Configurable channels open up so many more possibilities!
Levers and motorised parts can both have their channel configured. Each Lever that is placed will now be assigned its own channel, in increments of 1, from 01 to 99. This means that a Lever on channel 1 will only send signals out to objects receiving on the same channel. Motors that are placed will automatically be assigned to the highest available channel (if there is one). So if you have two Levers assigned to channel 01 and 02, new Motors will be assigned to channel 02 by default. If you have no Levers at all then new Motors will be assigned to the ‘?’ channel. This special channel ignores all input and allows the motorised part to work as if no Lever is present.

Aiming at any signal sender or receiver will change the crosshair to a scrollable signal configuration cursor. While this cursor is present, scrolling the mouse wheel will change the signal assigned to the part.

Primitive Block Scaling
We all know that placing 100 cubes one by one for that huge build can get tedious. We also know that the current pool of primitive shapes is still a little rigid when it comes to building certain things so we’ve introduced Non-Uniform Primitive Scaling (or NUPS)! 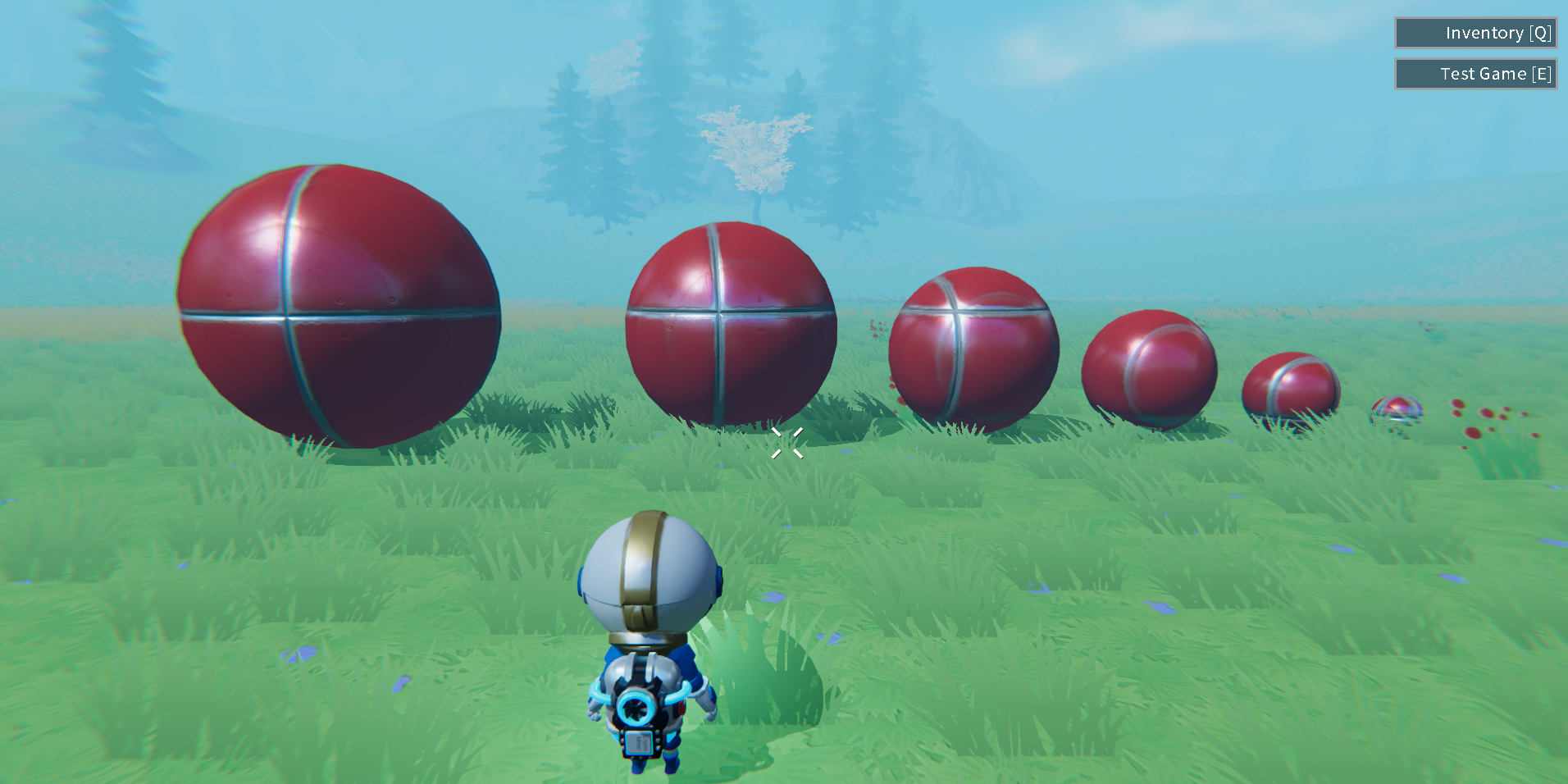 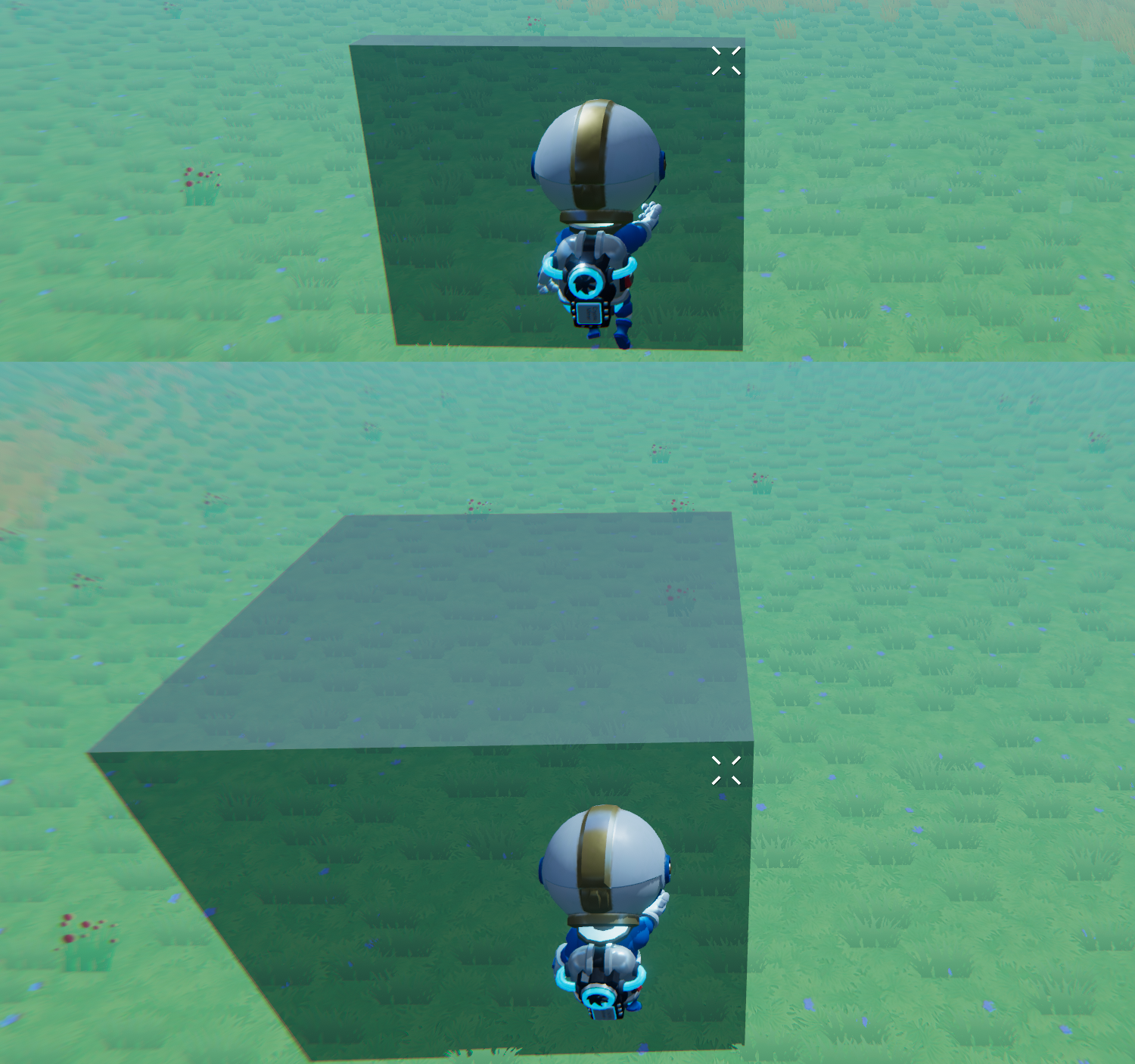 The number of parts required for a NUPS placement is directly proportional to the size of it though. This means that the giant 10x10x10 cube shown above may be one single cube, but it still requires 1000 individual cubes to build. If you don’t have enough parts, you will be shown a red ghost cube and, in a later update, the number of parts required and a small on-screen warning during the scaling. Weight, conductivity and connection points still work the same with scaled parts.
All of our current primitive shapes (cubes, edges, slopes, sphere etc.) can be scaled with this tool. Functional parts cannot be scaled yet, but in a later experiment you will be able to uniformly scale them too!

Part Count Increase
To give everyone enough freedom to try out NUPS, we’re increasing the part count again! We’re giving 99,999 of each primitive shape for this experiment, while joints and other functional parts are staying at 999 and Spawn Points will be limited to 100 for now.
Please note that these will most likely be reduced again when cloud based inventories are implemented.
To accommodate this change, any time you have over 999 of a part in the inventory or hotbar, you will instead see them displayed rounded down to the nearest thousand. 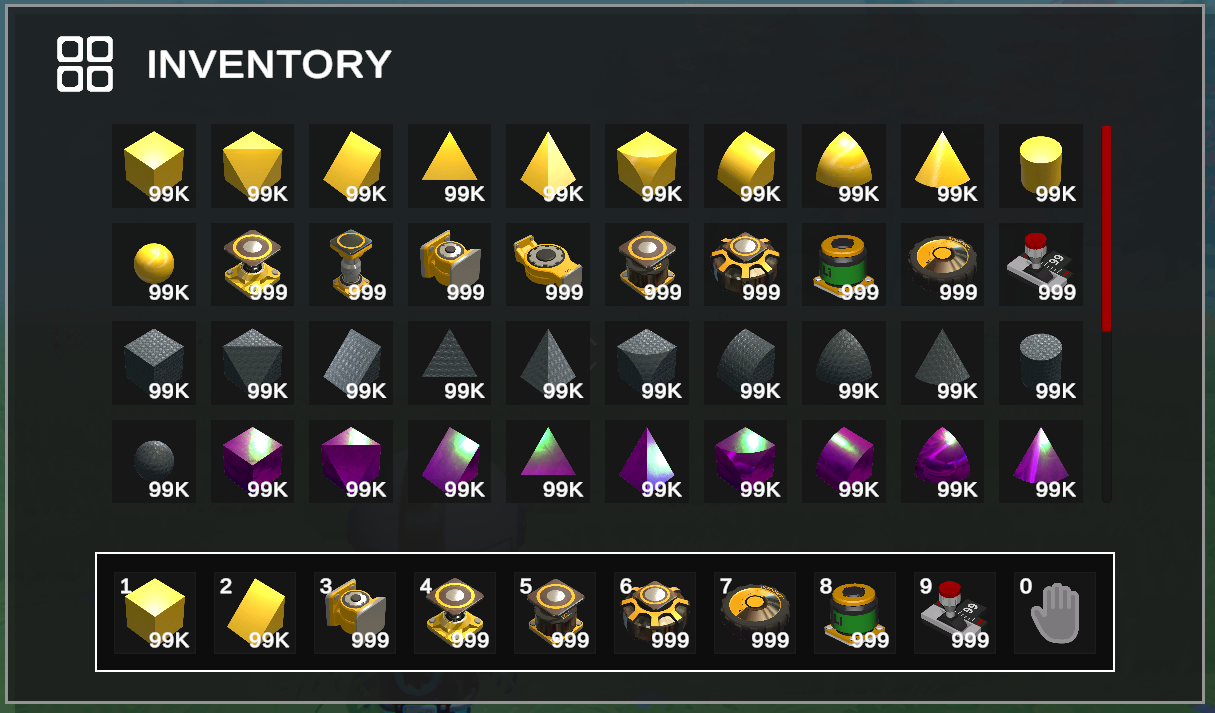 This isn’t an ideal solution in the long run but it stops things getting cluttered while we work things out.

New Part - Nuclear Reactor
This new part functions as a virtually limitless source of power! A single one of these can provide power for over a gazillion (roughly) seconds longer than a standard Lithium Battery. Due to their incredible output, they are only available in Build Games and are recommended as a power source for the games themselves and contraptions within.

Changes To Motors & Levers
Motors have had a bit of an overhaul to make them work better. Whenever a Lever is connected to a Motor, a few things will be different now.

Firstly, if the Lever is between neutral and full power, it will now apply all of it’s torque correctly, but the speed will be relative to the Levers position now. Previously the Lever position only affected the torque itself so it wasn’t quite working as expected.

Secondly, Levers in neutral now apply braking force to their Motors! In the last experiment a neutral Lever would simply not provide any torque, but this led to Motors not really slowing down or stopping naturally. If a Lever is in neutral, any moving Motors will brake in an attempt to reach a state of ‘no movement’.

Finally, all of the Levers on the same channel will now average their total output. Previously they would be totalled, meaning that a lever on +0.5 and +1 would just be capped at +1. Now, it is possible to really finely manage Motor torque with multiple Levers!

The mass/density changes should make using all materials feel a little smoother as we felt there was too large of a difference, which could discourage their use. The mass reduction across the board should create better physics interactions.

All of the joint breakage changes are simply to bring them in line with their visuals as we noticed certain parts could handle much more weight than intended which lead to some odd visual issues.

The Motor changes are in line with the changes to torque outlined a little earlier in these patch notes.

With so many new possibilities we’re hoping everyone is able to create and share amazing game modes.Thanks again for all of the support so far! Keep an eye on on YouTube channel and sub Reddit for more RCX 101 Tutorial videos and content in the coming weeks where we’ll explain some of these new parts and concepts in greater detail. If you want to support the development of Robocraft X further, please share it with your friends and leave a review on Steam.

Full speed ahead to Experiment 05!