Today we want to shed some light on the visual development of the female android EV-A2, or as her friends call her: Evi. She is one of the three playable main characters in the game. Together with Rick and Hubert, Evi forms the crew of the cargo ship Eric.

Let's start with an old piece of fan art, created before development of the game even began. 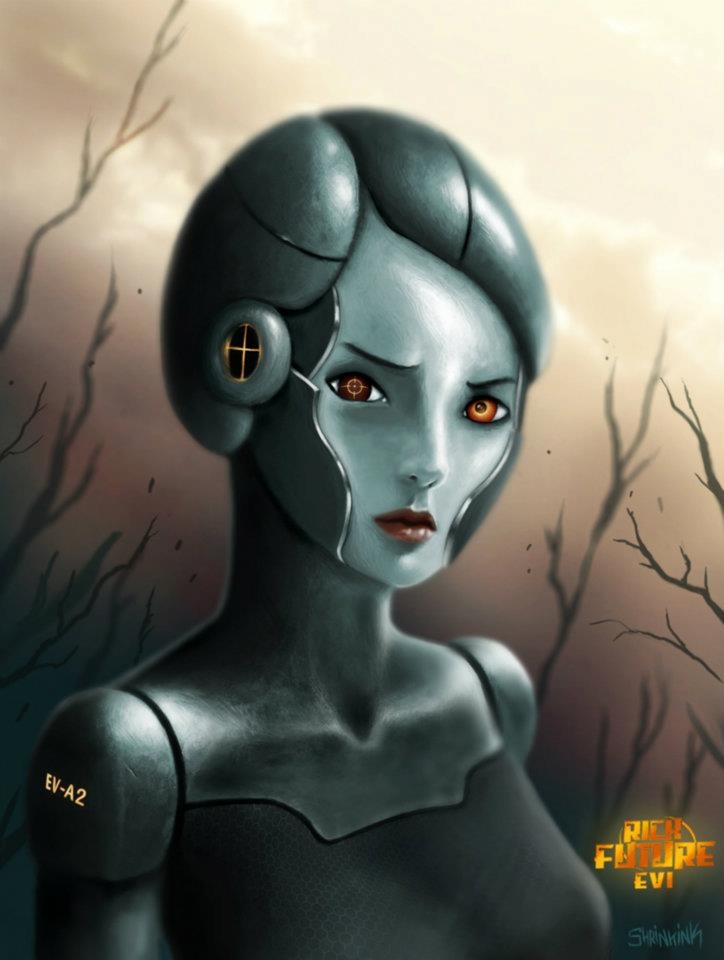 Over time the visual appearance of Evi in our game has changed quite a lot. When we started development many winters ago we were not even sure how the final model in-game would end up looking. The original Rick Future storyline only gave us a basic direction and it took us a while to arrive at what is in the game today. Even before we started on the game, several pieces of concept and fan art in various degrees of quality had been created. Certain elements had always been present in most drawings and concepts, such as the blueish color and a metallic body.

Bringing a character to life in a game, creating a new 3D model and defining what the character should look like is always a difficult task. Everybody has their own imagination of the character in their head and how it should look. The tricky part is to make everybody happy and still make sure all the core elements that define the character are present.

In earlier versions of the game we even tried out a completely different look for Evi using very different colors and shapes. Have a look at a more shapely, more female Evi using mainly orange colors. This concept was created when we were working on the first proof-of-concept prototype in CryENGINE3 back in 2013. 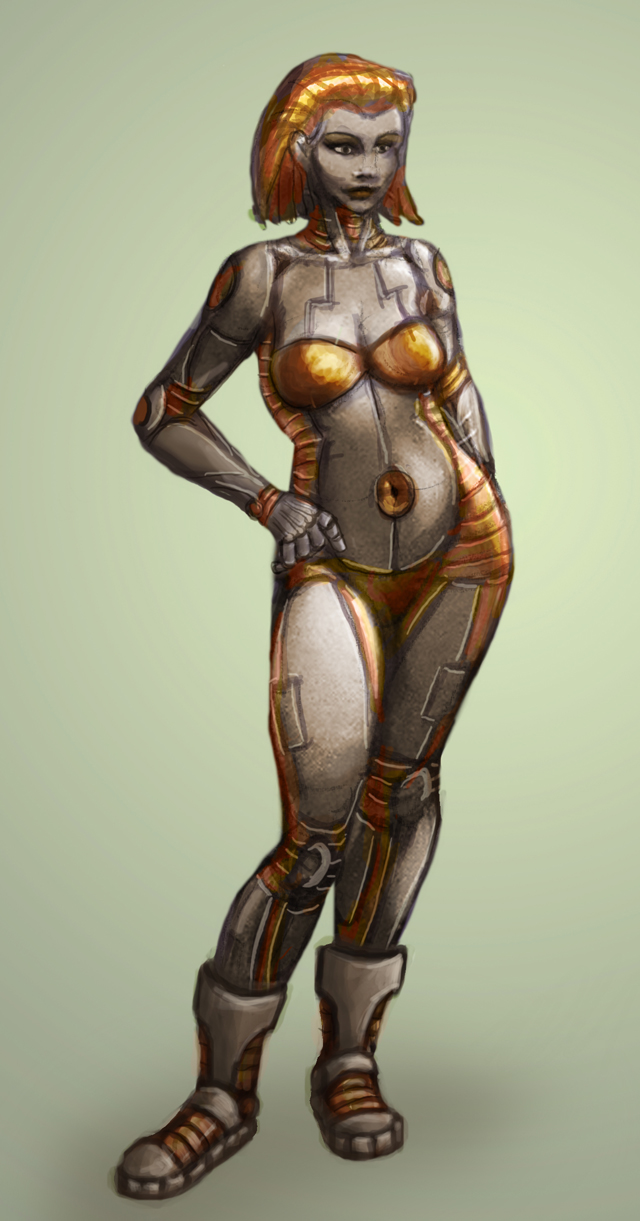 In the end there were many elements we didn’t like about this very different take on the character. It ended up looking a lot more female and less android than intended. Evi is clearly a female but this style was a bit too much on the sexy side, so we decided to go back and get a bit closer to the original metallic design.

For a time we even experimented and put some hair on Evi’s head. Besides the usual technical problems which hair in 3D engines brings with it, it made Evi look quite punk’ish and we canned the hair soon after. But just in case you are curious, check out the screenshots below to see how Evi looked around 2014. 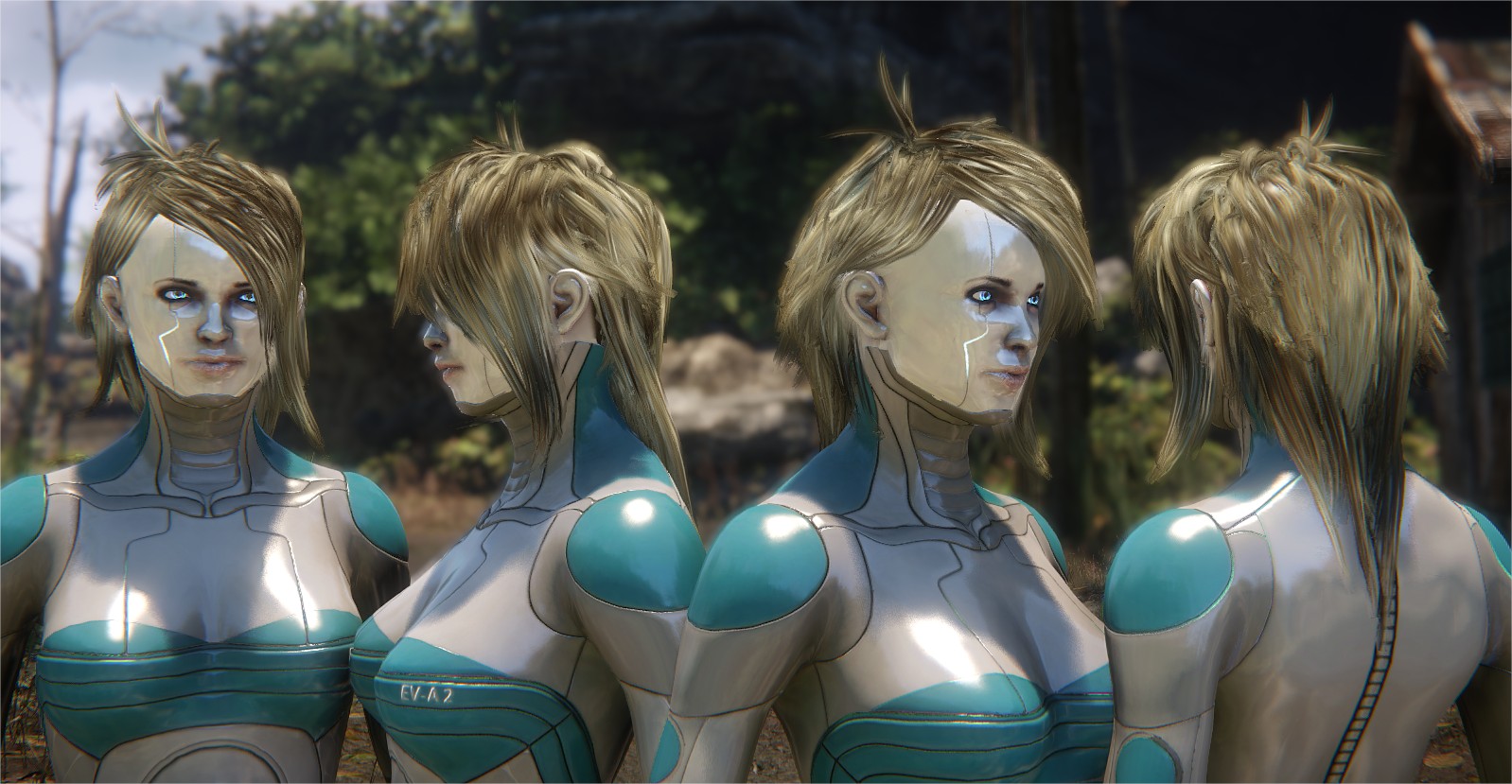 In the end we came a lot closer to the original silver-blue colors and cleaner shapes. If you compare the current model to the cover art of the latest audio episodes you can see that it is quite close.

Is that the final look? Well, who knows :) We are pretty happy with it now. Once all the animations and the facial setup is in we will do the first test, have her say a few sentences and see how things feel.
Let us know what you think! Like the design? Hate it? Let us hear you feedback!