After an exciting week for American Truck Simulator with the arrival of Idaho ...

We'd like to thank all those who took part in the open beta and contributed with bug reports and general feedback. We hope you can now begin to fully enjoy the various new features which are included within this update. So, what can you expect to find in the 1.38 update ETS2? Lets us give you a quick recap of the most significant changes.

First of all, one of the more significant changes that drivers will notice across the map at most major cities in the introduction of newly designed and unique truck brand dealerships. All dealerships locations across the Euro Truck Simulator 2 map have received a refresh, so make sure to visit them in-game as you drive past (it is well worth the stop!).

The French city of Lille has also received a reskin in this update. Some of the main changes include updates to road junctions, which have been re-worked and created with more accurate layouts. Road signs and roads, in general, have also been updated with more accurate, realistic, and detailed textures, along with new buildings and assets. If you happen to be passing by on delivery, we recommend making some extra time to see Lille for yourself.

We are also excited to introduce the inclusion of a computer graphics technique for efficiently approximating ambient occlusion effects in real-time. Screen Space Ambient Occlusion, better known in its shorter form SSAO, creates shadows in the areas where objects connect, to give it a more natural and believable look in terms of lighting and shadows.
Less powerful GPUs may struggle to keep up at full quality, and with 400% or similarly high scaling selected, even mid-range machines would feel the impact on fps. If you are not happy with framerate after this update, please open the advanced graphics options in the game and try to find the right combination of scaling and SSAO quality for you. With a weaker GPU, it may be advisable to switch off SSAO completely. 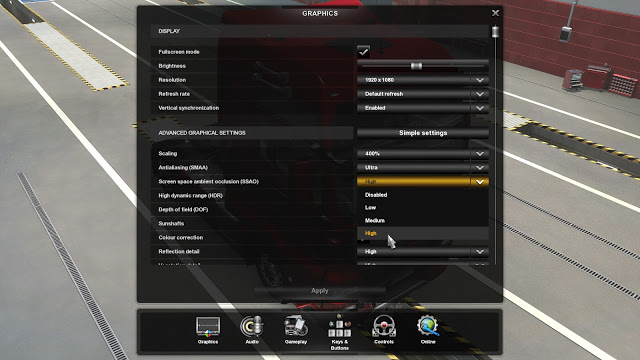 This new feature can be better explained by one of our senior programmers, be sure to read a more in-depth post about the topic at our Under the Hood blog post here.

We are also happy to introduce a long-requested update to the RGB Color Picker which drivers use to paint their trucks when purchasing or tuning their truck. You now have the option to input specific color inputs (HSV, RGB, and HEX).
We know that many drivers like to match their truck colors the same across their whole fleet, so we hope this feature is useful to you. 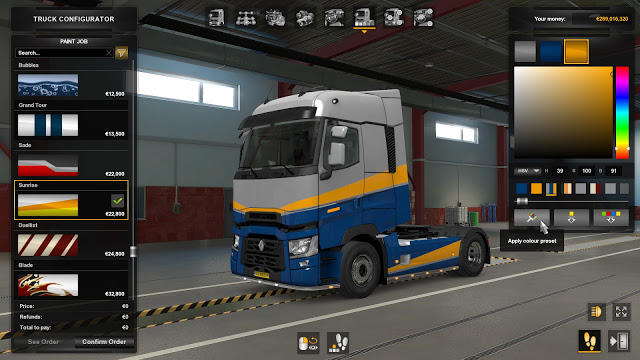 There have also been changes made to our GPS Route Advisor, which now features a cleaner and more modern-looking UI allowing for a larger on-screen map view. That's not all, however, as we also added new information for drivers using checkpoints for their journeys.

The DAF XF Tuning Pack has also received a small update which will now allow all DAF trucks chassis covers to be painted. We look forward to seeing how drivers will take advantage of this new customization on their DAF fleet as we know many drivers like to match their truck colours.

The FH Tuning Pack for Volvo Trucks has also received a small update based on feedback from our community. Drivers can also expect to find new tuning parts including front wheel covers, side deflectors with LEDs, stock front bumpers and rear top fenders with plastic and chrome options.

This isn't the only change however, as we also have included new horn models to better reflect the reality of the design of air horns. To reflect actual truck setups properly, our vehicle team has added new "pins" on truck cabins that are specific for air horns. We did our best with the research to make sure their locations are chosen on proper references, mostly on factory defaults, of course, but also taking into account what we could find in tuning photos from truck festivals. You can read more about their addition on a previous blog post.

We are also happy to bring 3 new Special Transport routes for drivers to take on in our latest map expansion for Euro Truck Simulator 2, Road to the Black Sea. These routes are:
Reșița to Târgu Mureș
İstanbul to Edirne
Pleven to Sofia

Each journey will come with its own challenges. So make sure to adhere instructions given on the GPS advisor and the speed limit which have been set out for you before your departure, as there is no room for mistakes! 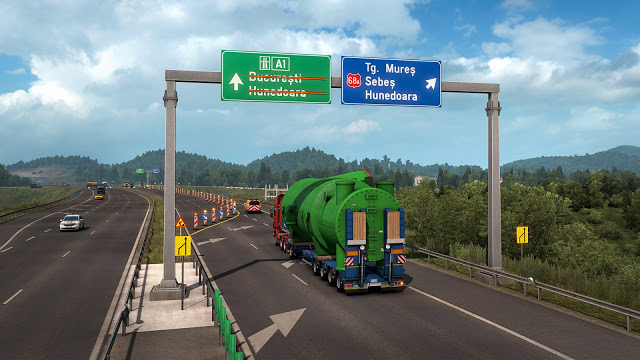 This addition will come as a free update for owners of Road to the Black Sea and Special Transport for Euro Truck Simulator 2.

There is much more packed into this update!

To enjoy the 1.38 update, make sure to OPT OUT of beta branches and your game will be automatically updated on Steam.

For the legacy non-Steam edition of ETS2, the update should be ready in a few days.
Some mods, however, may have not caught up yet - this update may effectively break them. So remember that you can always stay on 1.37 or an even older branch. The way to access and select them is: Steam client → LIBRARY → right-click on Euro Truck Simulator 2 → Properties → Betas tab → select the version you want.