You can now Equip troops and commanders, and Scavenge battle sites.

The commander page now allows you to equip your commanders. To equip a commander, click on the equipment spot and it will show you a choice of equipment that you have in your inventory that that commander can also use: 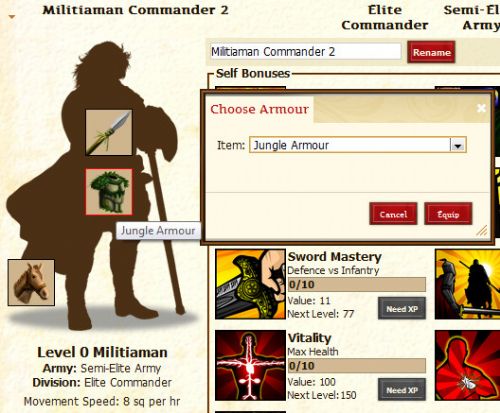 We have added a Movement speed indicator under the commanders silhouette. This will show the effects of any speed enhancing or reducing equipment and the commander's Forced March ability.
If the commander is also in an army and is an elite commander, it will also show the equipment doubling effects of being elite. For a commander to be elite, it must be in an elite division - and also the same type as the units (Calvary, Spear, Ranged, Infantry).

You can now equip units on the army page.

A set of the same unit type in the same division can only use one set of weapon, armour and mounts e.g. they cannot have mixed amours. Clicking the Equip button A above will allow you to equip or unequip the troops. 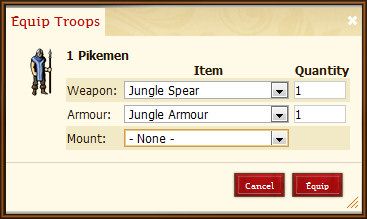 The quantity defaults to the maximum possible of that type that you have in your inventory (or number of units, which ever is lower) for fast equipping. Blanking the quantity will also show you greyed out what the maximum amount is.

For a division to be elite it must be of a single type (advanced and basic unit types count as the same type), the technology researched in that town, lead by a living commander, and a lesser or the same unit count as specified in the technology.
If the commander is the same unit type as the units, the commander is then also elite.
The equipment icon shows whether your division is using equipment. If your division is elite but not using equipment you will receive no bonus from being elite. Below is an example of an Elite division with and Elite Commander and using Equipment:

The equipment's combat bonuses are additive with each other - i.e. they stack. So:

All bonuses are then doubled if the unit/commander is elite.

The equipped units new stats are then multiplied by the additive effects of the other bonuses. (e.g. commander divisional bonuses, jungle warfare colleges etc.)

With the advent of speed altering Armour, Weapons and Mounts - it has become increasingly difficult to work out the combined speed effects to an army based on the equipment, unit speeds, elite formations and commander bonuses across the divisions.
To aid you with choosing the correct load out, we have broken down the speeds for each part of the army:

The army speed is the speed of the slowest division. The division speed is the speed of the slowest commander or unit.
Commander bonuses are applied after the effects of equipment bonuses - which alter the base units stats; so the speed bonuses for the commander and units are applied as follows:
effective speed = speed * (1 + (armour + weapon + mount) * elite) * (1 + (forced march))
If a set of units does not have a full load out of speed altering equipment, for movement speed calculation, it is distributed in a manner to make the best use of its effects.
e.g. 100 troops with 50 speed boosting horses, 75 speed boosting swords and 25 speed reducing armour:
50 troops will get the horses. The 50 troops without horses will get swords. 25 of the troops with horses will also get swords. The 25 troops with both horses and swords will get the 25 armour.

When troops using equipped items are killed, they will lose the same proportion of the equipment that they were using, rounded down.
e.g. If 50 troops of 100 are killed (50%) and were using 75 swords, they will loose 37 swords.
A small variable portion of these will be recoverable on the map: 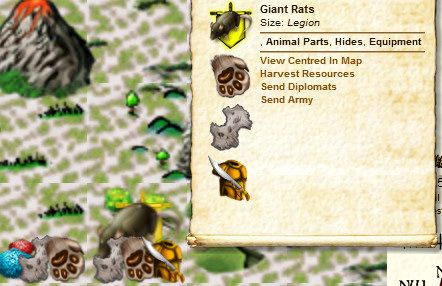 Unlike animal parts, there is no decay time on these items, and they will remain indefinitely until collected. If the combat occurs in a town 100% of the lost items will go into the attacked towns inventory.

To collect the items from the map you will need to research the Scavenging skill. 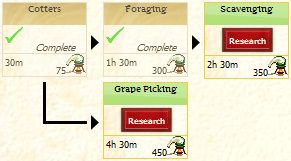 Having researched the scavenging skill, you can send cotters out to recover equipment from the map. The gathering time is the same as the cotters other pursuits.

Location Popups
Harvest resources option has been added to the location popups, which means you can harvest from the notifications window.
Scouts
Additionally report on the amount of equipment on a square.
Killed Gatherers
Now drop what they have gathered so far back onto the square they were gathering from.
Workshop Specialisation
Occasionally specialising a workshop would not instantly update your build times, but would require another building level to be built (of any building type). This has been corrected.
Post a comment
Sign in or join with: