I think now is a good time to discuss the equip system in CZ. It works similar to many games that use helmets, armors, boots and so on, but allows for far more combinations and power ups.

Our equip system is known as "Cetress Gems" and they come in a variety of different types. In order to even equip a gem, the player must first find an equipable cetress gauntlet. Cetress gauntlets (depending on the gauntlet) can hold up to 5 cetress gems per each one.

Let me discuss the different types of Cetress here.

[SUPPORT]
Adds additional strength, speed, stamina, life and stats to the player. This cetress pretty much replaces any armor system that would usually come in to play on many RPG games. These can also have many other effects such as poison guard, burn resistance and so on. Players can equip as many of these as they please to each gauntlet for awesome combinations!

[ENERGY]
Used as magic attacks, powers, exc. Only one of these can be equipped per each gauntlet and can grant the equipped hand an energy attack. Energy attacks can be elemental such as electric shocks, fire balls, ice waves, exc. Energy can also be beams of light and actual energy attacks like that of the famous anime, DragonBall Z. Since these equip to both hands, you could blast energy powers off fairly rapidly! Energy cetress is also capable of spells and larger effecting powers.

[SUMMON]
Used to to summon a monster to fight for you and only one can be equipped per gauntlet. Unlike most summon systems, this system doesn't summon a monster to fight along side of you, but actually allows you to play as the monster and use its special abilities in combat or many challenges. This system works more like the monster system from Arc the Lad, and monsters can be trained to become stronger and make a larger difference in battle. These are rarely dropped by defeated monsters and when dropped, they are always of the defeated monsters type. 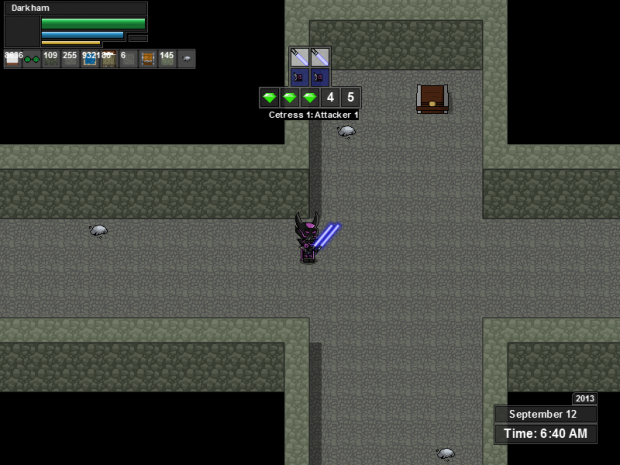 and that's it! As you can see, cetress gems can be very in depth and make for awesome combinations! You could be a brute with large amounts of strength cetress and so on, but it would be best to try and balance your character out as much as possible.

My influence for the cetress system actually came from the materia system in Final Fantasy 7 and just took off from there. Eventually it became what it is today. I wanted an equip system that really allowed each player to be different from the others and have their own style of play and armors just couldn't pull that off the way I wanted them to.

Now when it comes to the actual Cetress Gauntlets, these can be very hard to find. Like I said, the first one you acquire is very basic but is also easy to obtain early in the game. Having only 2 slots can be annoying, but as you progress, you will find more (one basic per each arm already allows for 4 cetress combos) and in total, you can hold up to 10 cetress gems.

Like I said, Cetress gauntlets can optionally be visible and add yet another visible equip item to your player.

Next article will be on a topic that I'm sure many of you would really like to read about. That last screenshot with the two laser blades should be a good enough hint for ya! ;-)

See you here next time!