Post news RSS Entry 019 - The nightmare is almost over

It's almost here! Although with close to no art, our baby is really close to being "finished".

We hope you are ready for quite the joy ride, cause this post is going to be one for sure! Our game developer, Rodrigo, has been working really hard on putting our little Frankenstein's monster together and he is almost done with it! Even though we don't have the art we desired in our game, all the mechanics (or most of them) are there and it's actually as fun and enjoyable as we wanted it to be. Soon the game will have to be posted, so the art is most likely going to stay as it is in the following videos and images but, well, it is what it is.
In today's post, we are going to dive in a bit more into each of the new features or changes.

Starting off with the menus. There are two, the main menu and the pause menu. To enter the pause menu, a.k.a., to pause the game, the player can either hit the pause button on-screen or press the "Escape" key on the keyboard, as we can see in the following video.

In a previous post, we showed you some gameplay examples but this time we have our first boss in flesh (or in shadow, maybe?...) with a different system from the common enemies that are in the rest of the level.
She has more of a random playstyle compared to the other enemies, choosing, in each round, between four different ways to play, depending on the situation that is presented; she also has the same life as the player (that being 30), whilst the other enemies only have 10 health points and her maximum card value will go up to 25 instead of 21. You can see all those features in the next image. 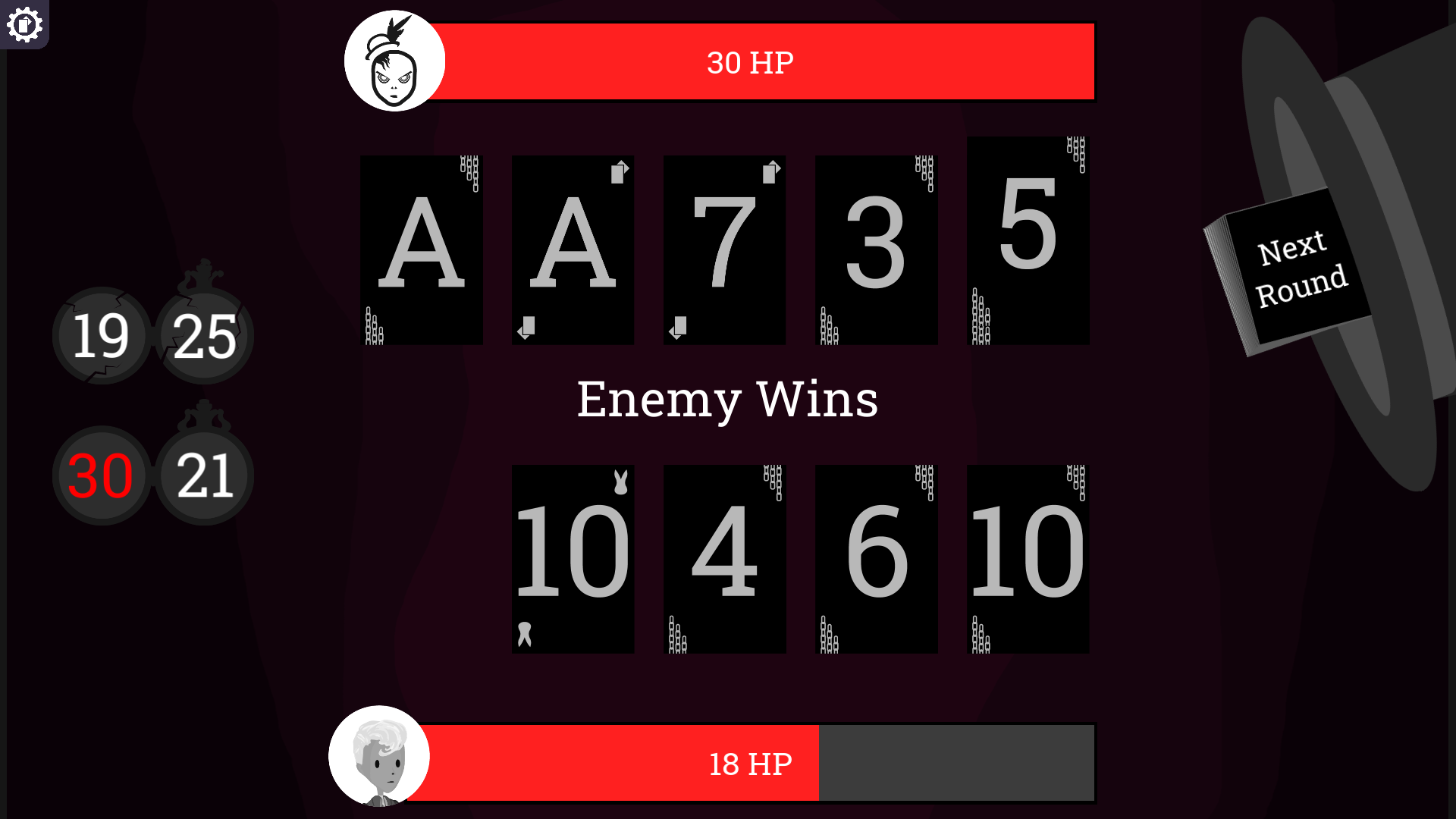 We also have the addition of the sprites of the first boss, the enemies, and the shopkeeper, which was chosen by you guys in a pool we did in our Twitter a while back. These are just placeholders since we don't really have the finished product nor anything more "animated". 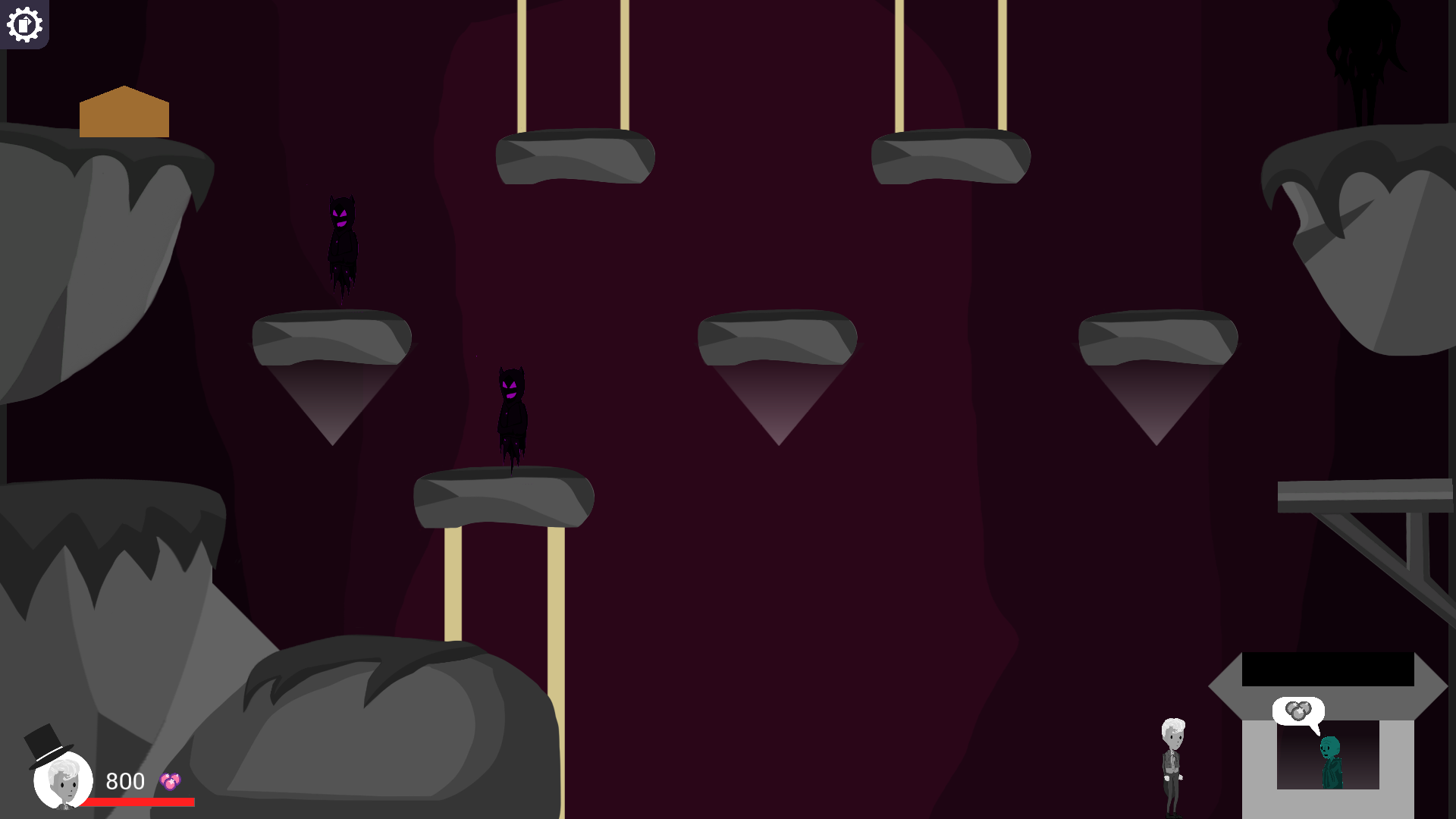 We also switched the sprite for the cards, counters, hat and we added the respective icons (one for the enemies and one for the boss) and health points numbers to the health bars, to improve readability.

For the shop, we implemented the UI that we have been working on into the game, it now has the buttons, prices, and pictures ready to show you the different cosmetics you can buy.

The interactions have been improved. Any interaction requires the player to hit the key "E" to proceed, a little image of the key will appear if the player gets close enough to an interactable object, And there are some "objects" like the shop that are signalized with an icon of a balloon so that the player can see that object from afar.

We also added a meta-type user interface to the screen, which is a red gradient in the corners of the screen that resemble what happens in some video games when you take damage and your health gets low.

There are also two brand new transitions, one to transition from the platform to the cards area and vice versa and another when the player gets to the bed and interacts with it.

Now, we were thinking about showing you a bit of gameplay but that would ruin all the fun, wouldn't it? Our game is a bit small and since the art department is a bit, well, nowhere to be found you wouldn't have anything new once you played it. So we decided to leave these last changes to your imagination, but don't worry, because you will be soon presented with the possibility to play our game to it's fullest.

This is all we have for this week.
Thank you for all the support, be good people!