The enemies of the underworld are rising to do the bidding of Apep. Take the role of a Sun Sentinel, and stop these evil minions from corrupting the land.

These are some of the enemies you will face and have to stop before Apep completely consumes all of Ra's light. From the Corrupted Scorpion to the Dark Pharaoh, each enemy is unique in there own way and may require different strategies to take each of them down. 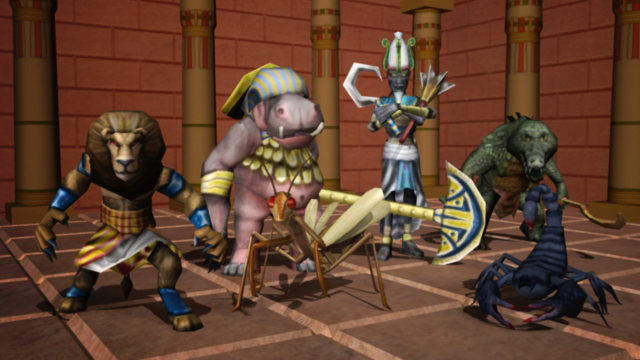 The Corrupted Scorpion: this is a standard enemy in Sun Sentinels and the first one you'll encounter. The scorpion posses low health with a stinger that strikes for medium damage. The scorpions flow out of the Underworld and onto the land in large swarms, so expect to face many at once!

The Cursed Crocodile: this enemy comes with a strong attack and scaled armor, making it difficult to take down. The Cursed Crocodile though doesn't have the fastest movements out of all the enemy minions, making him ideal for illusions and traps to get that extra hit in to take him down.

The Cursed Lion: this enemy is one you'll want to target fast and hope it doesn't reach your precious Scarabs and Eggs. The Cursed Lion is a fast minion that has the ability to jump certain distances, over-mining some set traps you may have laid out. Beyond their speed and jumping ability, the Cursed Lion comes with high health and a clawed swing that will deal great damage.

The Dark Pharaoh: once a ruler of the land, this Pharaoh has risen from the dead thanks to Apep. The Dark Pharaoh now marches from the Underworld and will become a difficult enemy to deal with. With a strong attack and high health value, the Dark Pharaoh also has the ability to summon swarms of Locusts from his mouth to bring aid to his cause.

The Cursed Pray Mantis: this giant Mantis can pack quite the punch when attacking your Scarabs. Similar to the Cursed Lion, this giant Mantis can also traverse the level and jump even greater distances to avoid certain traps and towers. This ability aids the Mantis in reaching its goal but it's low health makes them an easy target to get rid of.

We have a handful of more enemies we're working on and many more we wish to bring to this game. The Cursed Hippo is almost finalized and will be the heaviest of the enemy minions, holding a large amount of health but having very slow movements.

Concept art below shows the Cursed Jackal and Corrupted Anubis Warrior, which are enemies we're currently working on. The Cursed Jackal is a very weak enemy but has the greatest speed out of all the enemy minions, zooming throughout the level and running over traps set. The Corrupted Anubis Warrior is a very strong enemy all around, making him a primary target when rising from the Underworld.