The enemies in Cosmonator are seriously out to destroy you. Here's a look at the various ways exactly how they're trying to achieve that.

Cosmonator is full of a wide assortment of evil alien enemies, and those enemies all have their own distinct weapons systems that they want to use to kill you. Aside from the basic 'shoot straight at the player' and 'fill the screen with random clusters of bullets' strategies that are used by the more basic enemies, there are also some more interesting and complicated bullet patterns, especially later on in the game when the going gets a little more crazy. Here's some of what's on offer so far (and we are currently working on a few more weird crazy patterns for a future update, so watch this space!):

The 'Orbital Destroyer' boss has two main special weapons up his sleeve, apart from his basic attacks. First, he attacks the player with alternating wide sweeping laser beams (left); later on he switches into angry mode and lets loose a flurry of cluster bullet shells that each split up into smaller replicas 3 times, filling the screen with an algorithm of death. 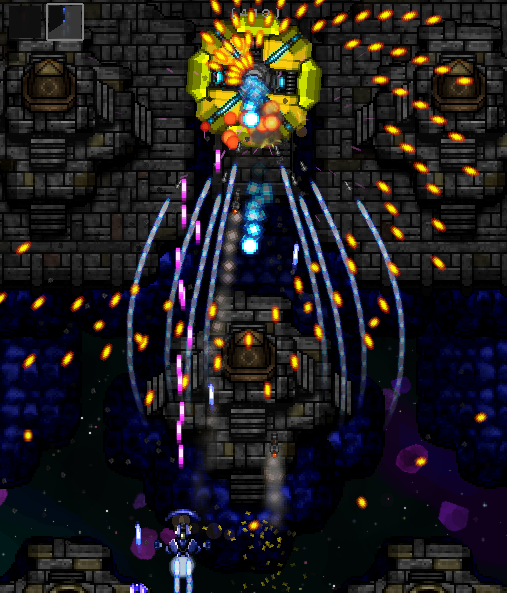 Once the Voronoi Rotator miniboss starts spinning, you should consider casting a defensive spell - it's about to let loose a spinning hurricane of bullets!

The many different types of enemy ground turrets in Cosmonator all have different specialized weapons. Some shoot carefully aimed area-of-effect plasma flak cannon shells at you (left), while some others attack you with medium range flame throwers (right), which are easy to avoid if you are far away but which mean certain death if you don't take them out early enough.

The first boss, 'Juggernaught' (left) has a tricky phase where it combines those weird long thin spinning bullets (we call them french fries) with simple waves of spread out bullet fans. The 'Solar Axis' later on in the game has something slightly more complex: It goes into a mode where it launches waves of arching bullets, both clockwise and counterclockwise simultaneously, which take some precise dodging to evade.