The last day in school for this year is now past, and the awesomeness of Christmas Holidays is setting in. And so I thought I might as well give you a little christmas present!

For once I can say that I've had a lot of time programming, in spite of the amount of school work I have had to do. And now that the Christmas holidays have begun I can proudly announce that I'm finished with version 1.1 of the Level Editor, as well as a few other things I felt like adding. So now that Christmas is coming I present to you the World of C'wbiau Level Editor v1.1, a Christmas present from me to you! 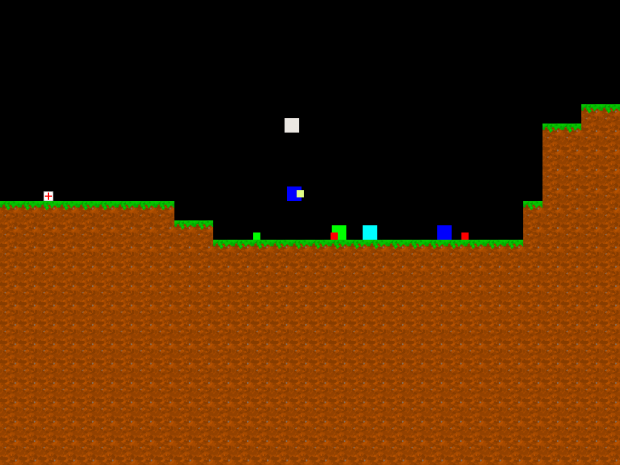 The Full Package
This time I've chosen to skip (almost) all the secrecy of the past. By which I mean that in this release I will include EVERYTHING that I've made, instead of cutting some pieces out like I have done in screen shots and the previous Alpha alike. The result of this is that you'll get several new NPCs, of which all are not enemies, and several other objects to play around with.
It might also be interesting to know that this release also includes the World of C'wbiau Alpha 1.2.5 (without any levels), as it is required for the Editor to work properly.


Now, with this little change log, I wish you all a merry Christmas!

-== In the Editor Only ==-
Features:
• When placing an image, the original image-file will be copied into a resource directory for easy
transportation along with levels.
• Improved the system that allows you to scroll over the level using Ctrl + Left Mouse.
• Improved object placement/updating.
• Updated the Help Menu by adding credits and version number.
• Added ID numbers for the selection menus.
• Added the name of the current level to the window's title.

Bugs and Performance:
• Choosing a non-existent image when placing an image object terminated the process.
• The images were not centered in within the cursor square.
• Fixed a problem with some objects being moved upwards each time a Level was saved.
• Closing the either the Editor or a test window whilst loading a level led to a crash.
• Fixed some problems with image loading.
• Fixed some problems with image saving.

-== In the Game Only ==-
Features:
• Burning enemies (and the Player) will now automatically be extinguished after 7 health is lost to
the fire. Though the fire can still burn out before that limit is reached.
• Updated the Blob's texture.
• Added three new kinds of NPCs (NOTE: They are a bit suicidal as of yet...)
• Added health kits.

Bugs and Performance:
• Optimized part of the updating system, making it faster.
• Visual effects were not displayed properly.
• Found a little bug in the collision system (for NPCs and the Player).
• Fixed a problem with objects such as dispensers not updating if they are outside the screen.
• Rewrote some parts of the code for the Player, and reorganized it to make it easier to work with.
• Added a new secret thing, on top of making another one less buggy.
• Fixed a problem with enemies seeing through some solid objects (such as fans).
• Fixed a problem in a algorithm which is not used (:D).


Linux Users
It seems that the problems I'm having with Linux are a bit more problematic than I thought, so with that and what Doppler said in a comment on the last news post in mind I have not added Linux support as of yet, but don't you worry, it will come eventually.