Creating hand painted textures using a substance base, some updates on marketing and general modeling is what this development blog is all about!

It's time for the second IndieDB Eco Tales dev blog! Time sure does fly, we've done some work and had some fun, celebrating an old man turning 30 and two cruises having sadly stolen a lot of our time, but you've got to live too right?

Jona : I've been painting a lot lately, trying to level up my 2D, the progress is slow but steady and, in my own humble opinion, things are starting to look rather good!

A new workflow I'm trying out is creating a simple base in substance designer, it may look something like the following image, a simple tiling pattern that has some random rotation and lightness variation, I generally also add some scale variation. 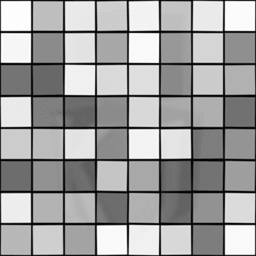 Starting point, as you can see, the effect of the rotations and scaling are extremely subtle, BUT they are there to add visual interest and make it look less digital.

Next up as in case of these cobblestones, I select a base color and using the lightness variations from the base texture, I also alter the hue slightly on each stone.

In this case, the texture is of a seemingly grey material, however, nothing in nature is ever really truly without at least some measure of color. Here each stone has a unique hue at an intensity of about 3-5 on a saturation slider in Photoshop.

As you stare at the texture, I doubt you can tell that some of these has a green base and some a pink one, but that again, is not the point.

In this case I've also laid out some base lighting. For all of my textures, the light will be coming at an angle similar to if the sun had been up but mostly covered by clouds, since, without a light direction, everything will look dull and washed out. 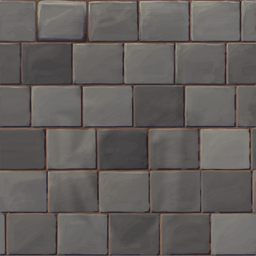 Next up is an almost finished piece, a simple brick texture, next I'll be adding some mid-range details.

Look at the brick second from the bottom on the right side of the texture, see that dent? This would be a mid-range detail.

After that I'll be adding some surface details, scratches are a good example of this, but not too much, as these will tile, you don't want anything which will make that too obvious.

In these the hue variations are even more subtle, ranging from slightly more yellow on brighter tiles and generally slightly more red on the darker ones. 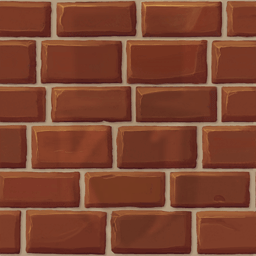 This here plank texture on the other hand, I'm calling done, this is a level of graphical fidelity that I can feel proud about. There is room for more mid-range details and most definitely some surface details, but sometimes, very often actually, less is more.

KISS, Keep It Simple Stupid, remember this acronym, it's true within all walks of life.

Were I to revisit this in the future, I would probably add some hue variations, writing this, I'm fairly sure I will.

Another very likely case is that I will use these textures as a base for broken and or dirty variations which I will "paint" onto my buildings and environments using vertex colors and a custom shader I've written. 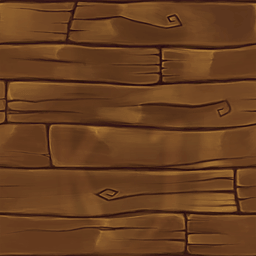 Finally we have something that I like to see in games, decals or big broken parts of otherwise perfect buildings etc, painting it like this, makes sure the breakage looks and fits into the background; see how the unpainted plaster leaks into the crevasses between the bricks? Pretty nice isn't it?

Now consider that the purple plaster part is transparent and we've got a recipe for success!

We could even throw our planks and cobblestones under a nice broken plaster and whop, the house is suddenly unique. 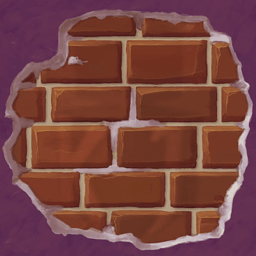 We've been trying new marketing ideas to get the game out on twitter @EcoTalesGame, one new thing was to show an asset via Sketchfab, this asset can be seen down below, it's a very simple hand painted sword so, getting too much out of it wasn't really expected.

We got a few retweets and a follower or two, me, Jona @Gruckel got 14 of them however, despite the post originating from @EcoTalesGame, strange.

Have you fellow devs had any experience like this, what if anything did you do about it? Please do leave a comment, we're very interested in learning more about marketing!

I've yet to finish UVing the house from last week and am rebuilding it part by newly UVed part. 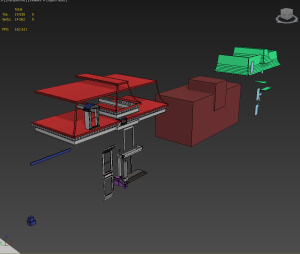 Dividing parts and making it modular

We are also reading every single article we can find on marketing, and are trying to integrate the thoughts and experiences of other developers wherever we see fit, so as mentioned above, do please leave us a tip or two if you've got them ;)

Krister : As for me and my twitter, Krister @Klyxor. I'm not only bitter over the fact that I did not manage to get as many followers as Jona, apparently you will be ever so popular if you can produce nice graphics, but code... Code is invisible and will lend you a few sympathy followers or likes at most.

Well some of my so far invisible contributions to @EcoTalesGame this past week has been more inventory stuff, GUI stuff and some research. My greatest role this week however has been that of a game designer (yet again something more popular than a coder), I drafted a simple rule set for the shop part and adventure part (this is still a secret until the announcement of what we are doing, so hush) and discussed it briefly with Jona during the weekend, before a long over due session of Pathfinder; Kingmaker in which I was the DM and got to release all my frustrations on the group of unaware "heroes".

We came to an agreement that the rules where a good starting point and will continue to talk about them as we continue our own adventure of developing this super mega awesome game that I believe should be named in my honor.

Before I leave you I do have a challenge for you, prove to the world that we coders are insanely interesting by following me (and @EcoTalesGame), also programmer art is far superior, proof below.