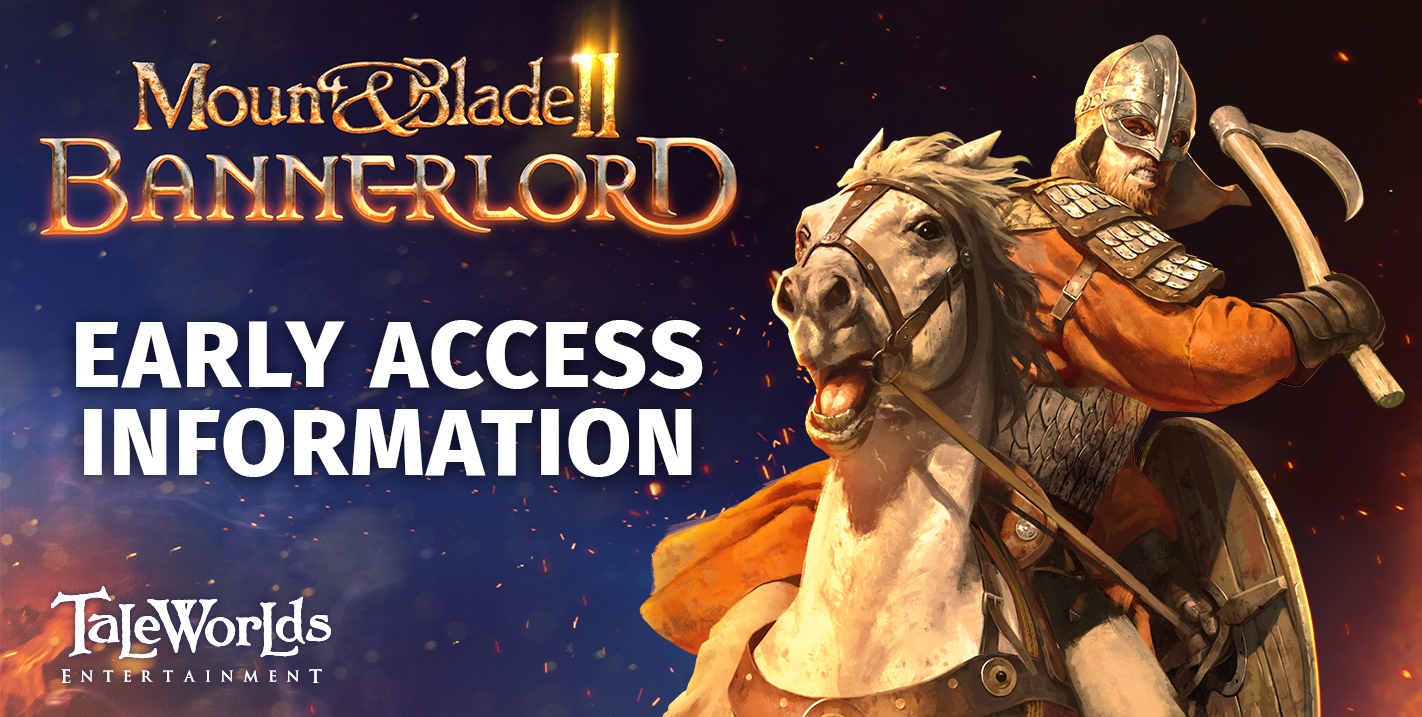 The Taleworlds team has released recently promised Early Access information. TL;DR, they offer a 10% discount in the first two weeks following the early access launch, and also move the release up one day.

After eight years of blood, sweat, and tears, Mount & Blade II: Bannerlord's Early Access release is finally upon us. In just a few short days you will be able to gird on your sword, don your armour, summon your followers and ride forth to win glory on the battlefields of Calradia!

But before we move on to discuss the release of the game, we want to take a moment to talk about the current coronavirus pandemic. It probably goes without saying, but this certainly isn't the scenario we envisaged for the release of the game. However, we have tried to make the best of a bad situation and thankfully, with the help of our IT team, have been able to continue work on the project from home. This has come with its own challenges of course, but we are still very grateful and lucky to work in an industry where it is possible to work remotely, which we know isn't the case for many of you. It might seem like a pretty ideal time to release a game (after all, everyone is at home right!?), but we know that the current situation has placed a lot of people in a difficult position when it comes to balancing their finances and risking their health.

With that in mind, we have decided to make the game available for 10% off for the first two weeks of sale. In addition to this, anyone who owns any previous Mount & Blade title will be eligible for an additional 10% off in select digital stores. Also, you can breathe a sigh of relief because there won't be a delay... In fact, quite the opposite! We have decided to bring forward the release of the game to 10.00 am UTC, March 30th.

So, you know the release date and the price, but what content is included in the Early Access release?

In singleplayer, you will have access to Custom Battle and Campaign game modes. Campaign is a new and somewhat more structured approach to the Mount & Blade experience that blends a storyline and key events with the traditional sandbox gameplay that our players are familiar with. Campaign aims to provide players with clear goals and missions that can lead to a successful conclusion to a playthrough. However, if you refuse to take any direction and prefer to plot your own rise to power, you can simply ignore the campaign missions and go about your business!

During a campaign playthrough you will do most of the things that you would expect from a Mount & Blade game, including creating your own character with their own backstory; exploring a vast, re-envisioned continent of Calradia; hiring companions to accompany you on your journey; raising warbands and armies to devastate your enemies on the battlefield; conquering towns and castles; progressing your character skills and equipment; learning and mastering the game's much-improved combat mechanics; and commanding and fighting alongside your troops; among a host of other things, many of which have been featured in previous blog posts!

And while there is definitely plenty of content for players to dive into and enjoy, we must be clear in reminding you that this is an Early Access release. There may be bugs and glitches, there will certainly be balancing issues, some features may be missing or currently disabled, and certain aspects of the game might not receive full-support until later down the line. You can expect to see reused scenes (our eventual aim is that each town and castle will have its own unique scene) as well as other types of placeholder content, such as voice lines, animations, quests, etc.

In terms of multiplayer content, you can expect a continuation of the recent multiplayer beta, which features 4 different game modes: Skirmish, Captain, Team Deathmatch, and Siege. We will continue to work on multiplayer throughout Early Access by introducing new features, game modes, and other additional content. We expect to enable our community to host private servers closer to the full release of the game.

Our current plan is to localize the game into the following languages: French, Italian, German, Japanese, Korean, Polish, Brazilian Portuguese, Russian, Simplified and Traditional Chinese, Spanish and Turkish. However, during EA, localisations for these languages may be missing entirely or may be incomplete. Other languages may be added later.

If you would like to experience everything that Mount & Blade II: Bannerlord has to offer, then we strongly encourage you to hold off on buying the game until the full-release.

Finally, we would like to announce that we are officially drawing a close to this series of blogs. With the game on the verge of release, we would prefer to switch our attention and limited resources to work alongside our community. Of course, if we feel that we have something newsworthy or a new feature that we want to highlight and discuss, we will share a post, but for now, this will be our last scheduled blog post.

We wish you all the best during these difficult times and hope you and your family stay safe. Now go wash your hands!

A day early? Early access getting even earlier! I don`t mind. I`ll try to keep my hype in check and keep in mind EA limitations.