Bug fixes, new parks and plazas and a bunch of other goodies!

The game is now on sale! So if you want to try it out, take this opportunity to jump in at reduced cost! :)

I’ve decided to launch a somewhat smaller 0.26 version to get a few bugs and issues out of the way sooner. Primarily what has been left out and will be added next week is the new camera tutorial, some new camera controls (some have been added in this version) and some new buildings and props (billboards for example).

But here’s what’s in:
Fixes:
– Atmospheric scattering and SSR off by default on Mac (due to compatibility issues).
– Loading performance improved. Also managed to removed stalling at the end of loading a city.
– Fixed poor performance when placing/removing many blocks.
– Fixed camera shake bug when removing many blocks.
– Fixed calculation error.
– Fix rotation when using shift A/D when not aligned to horizon. Default key setting also moved from shift A/D to Q/E.
– Fixed issue with old block types not being translated correctly (affected first campaign level and a few challenge levels).
– Fixed (ie. removed) camera shake when trying to destroy blocks on a level where blocks can’t be built.
– Fixed status effect not correctly displaying buildings that lack electricity or water. This was due to a change in how missing resources is handled since implementing the new UI for buildings.
– Cost deduction now correct for bridges (cost was not per segment before).

New additions and tweaks:
– Building camera lock on replaced with a camera move to building function. Accessed via shift down and left or right mouse button. This is currently not removed from the tutorial, as the movement tutorial is being replaced in the next version!
– Recycling center now produces small amounts of carbon. When running at 100%, it can essentially support a carbon power plant at 50%. Making the early game a bit easier.
– New building UI.
– Increased movement when using scroll wheel.
– User interface color can now be changed in the options menu.
– Controls movement speed options added.
– Bridging pieces added – a sort of walkway to cover up stuff like vactraintubes etc.
– Deactivated buildings are now saved and loaded as deactivated.
– New sounds for buildings.
– New bridge icons.
– Two new bridgetypes added.
– Max bridge length increased a bit.
– New 2×2 park and plaza. More to come in future versions.
– Added more bling to the stadium.
– Consumtion now evened out across all consumers. Before, consumtion was on a first come first serve basis, meaning that buildings whose consumtion was ran first would get all resources. Now this is evened out, so that if there isn’t enough to cover all requirements, then the available amount is split evenly across all consumers. This also fixes an issue where the requirement calculation used to overstate how much electricity and water is required.

This version adds two new bridge designs, and also adds supports to existing ones. Supports are currently only added if there is free space beneath and if the distance to a block below is one unit. 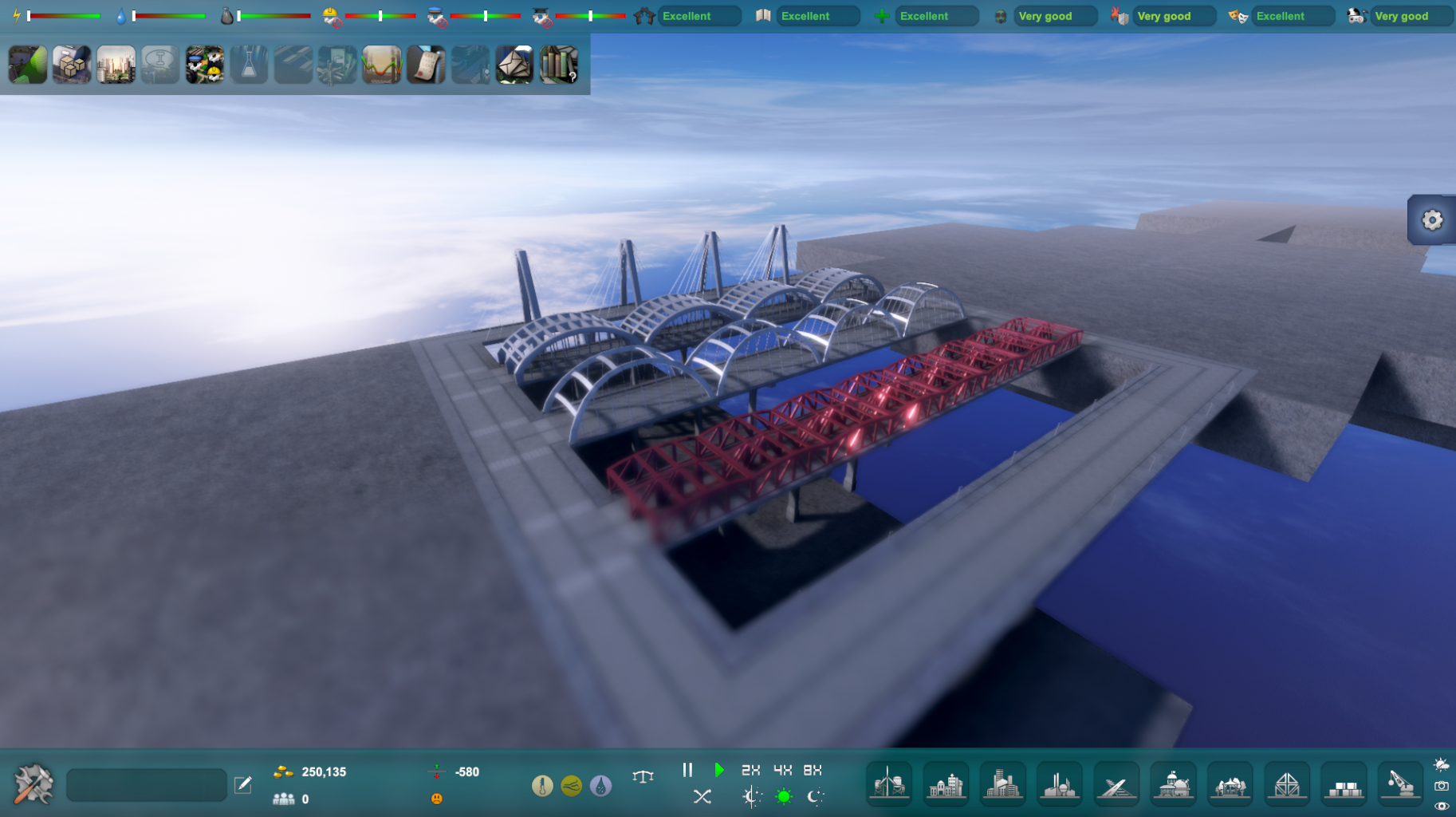 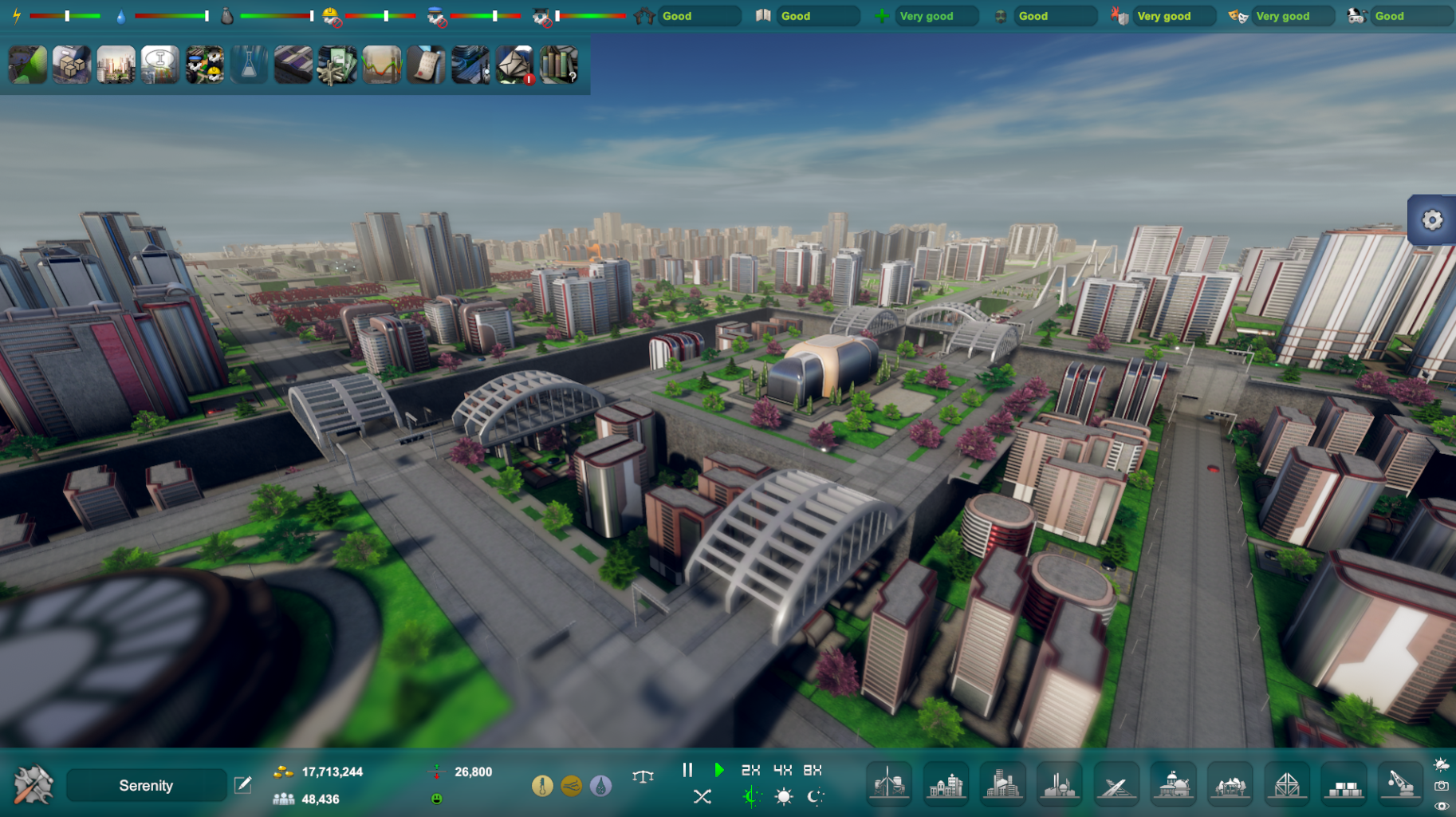 The new building information panel is now more or less complete. There is one remaining issue where unconnected lots will sometimes not display missing water or electricity properly. A fix for this is incoming. 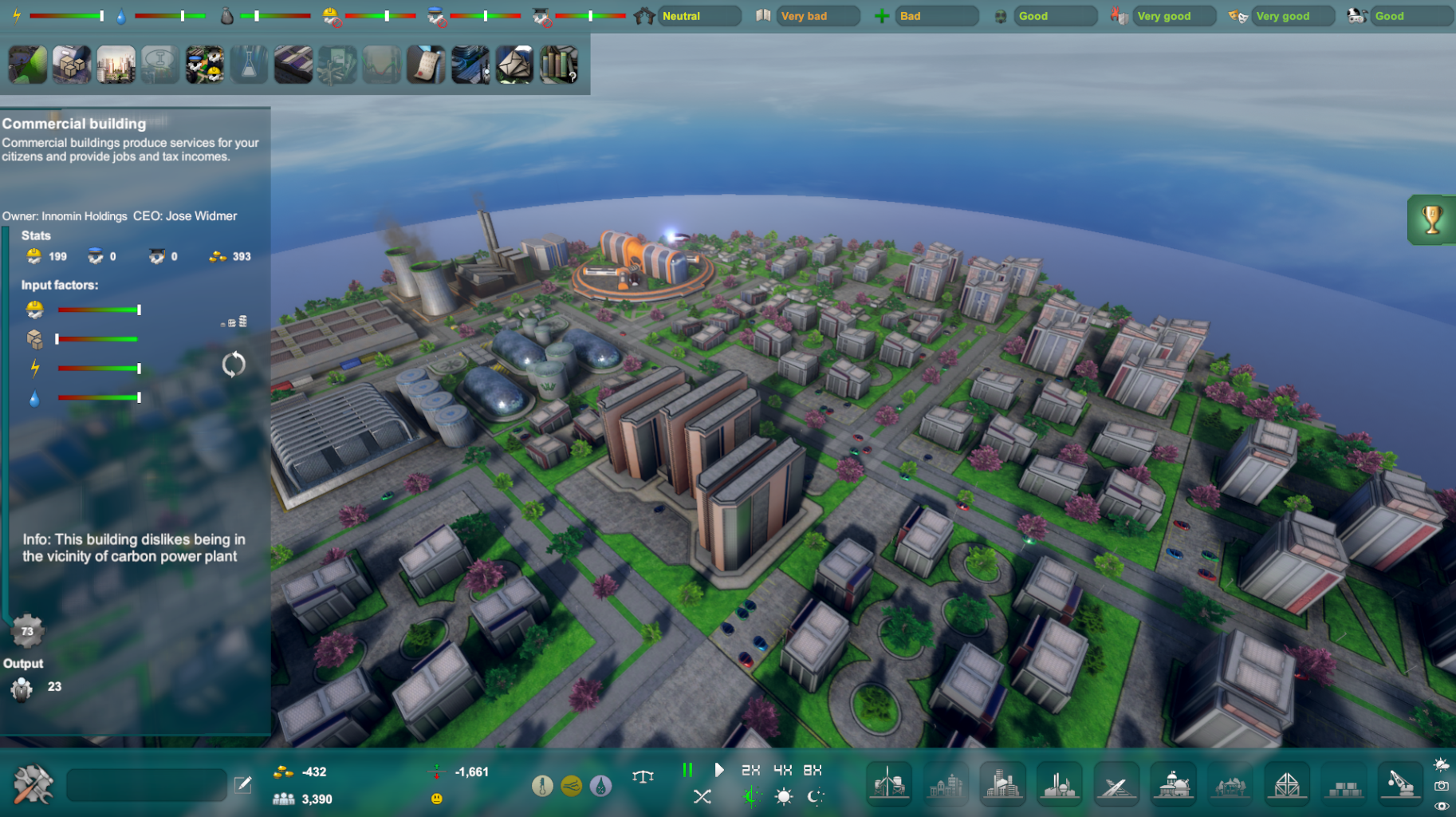 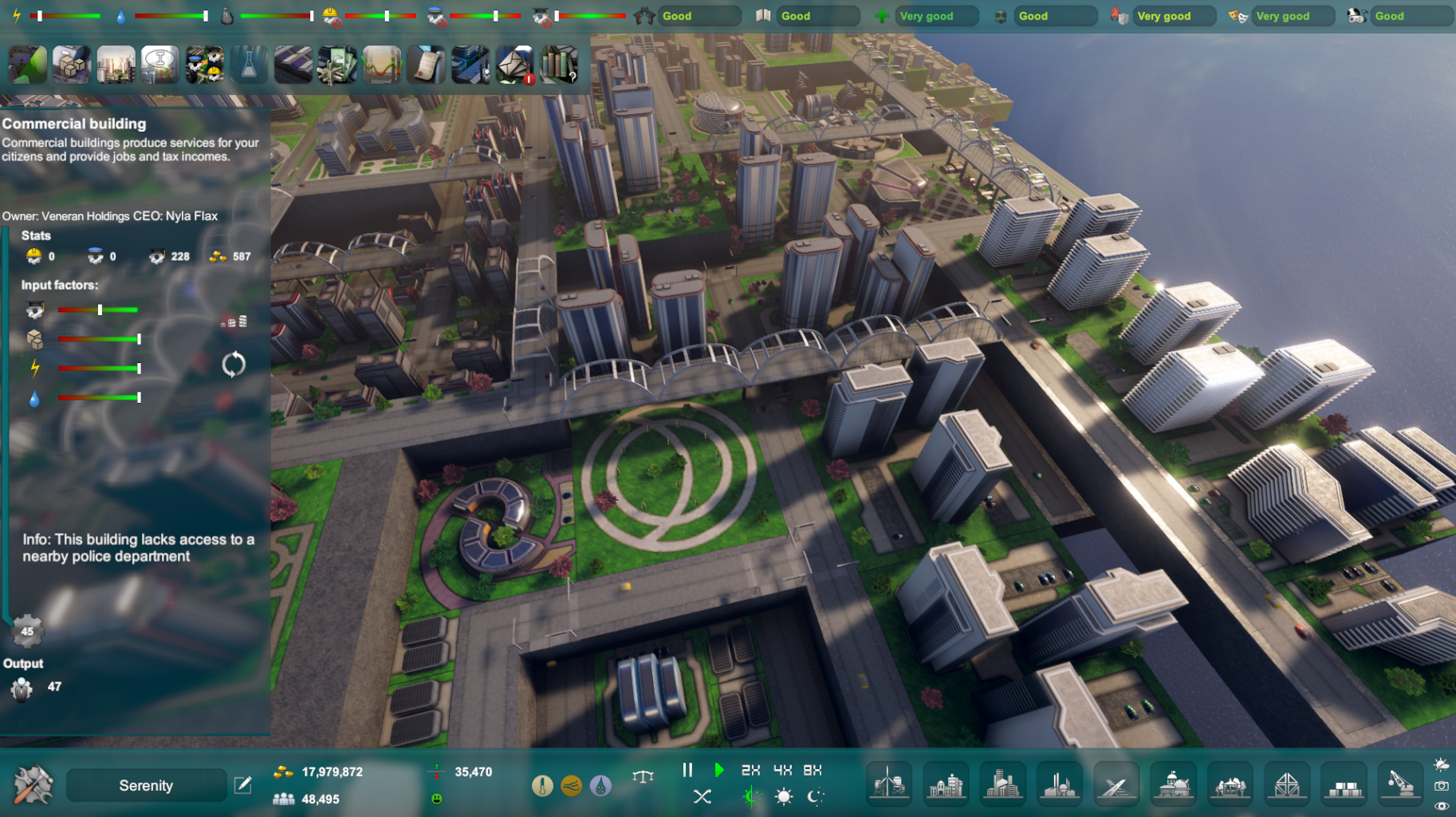 I’ve now added a precalculation of the amount of resources required. This means that instead of consumtion being performed per building until there are no resources left, now the total required amount is checked beforehand and the available resources are portioned out.
For example, you have five buildings that require 50 low skilled labour each, but you only have 200. Before four buildings would get 50, and one would get 0. Now they all receive 40. This will generally prevent certain buildings from not working at all due to missing some resources. Now, if you have no carbon (for example), then you can’t power a carbon power plant regardless. 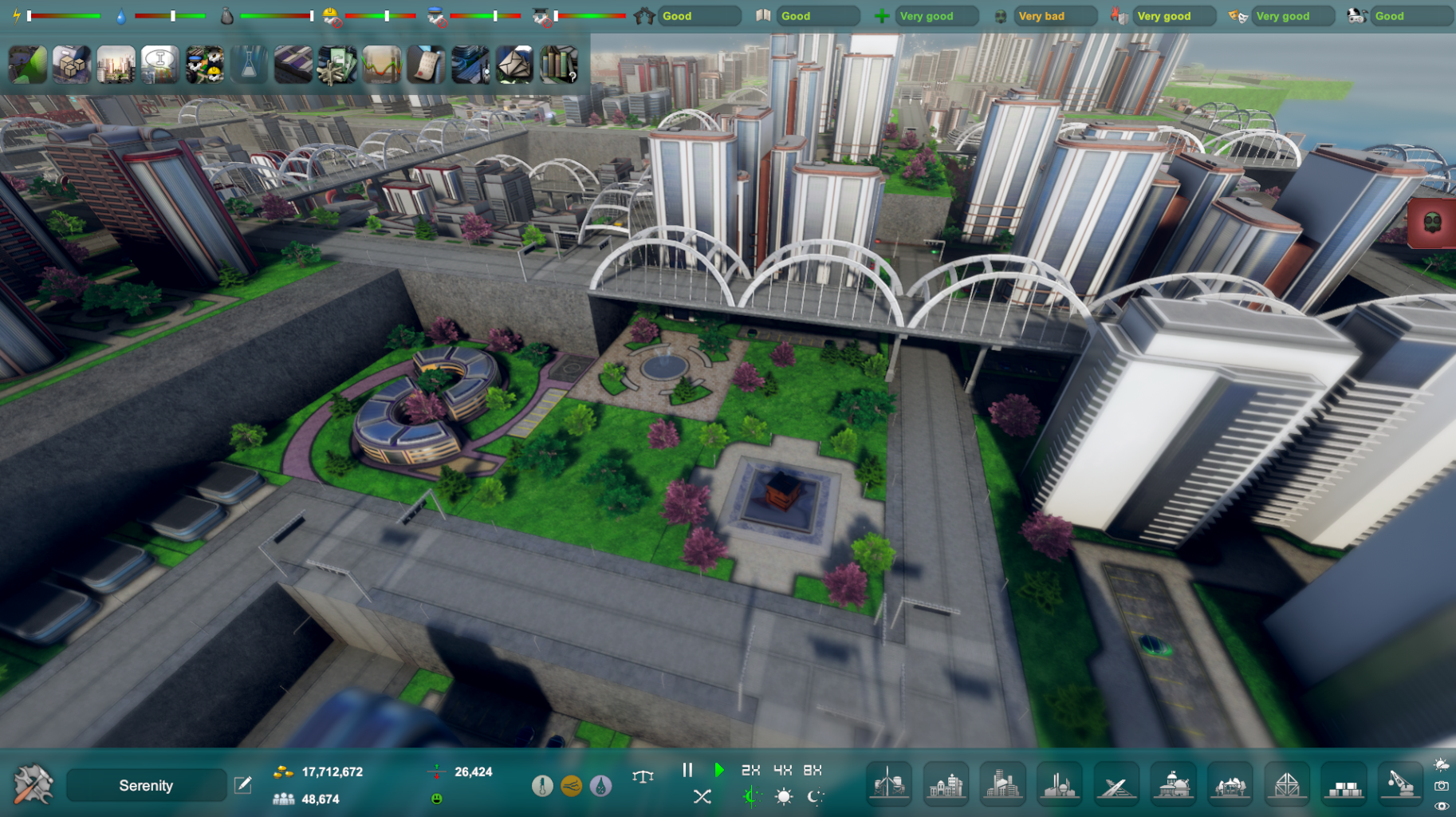 I’ve also started adding in some more buildings. More were intended for this version, among them a botanical garden, but there are now 2×2 parks and plazas. More stuff coming next week!

Lastly, I was informed ofan issue with atmospheric scattering on Mac, this feature has now been turned off to prevent it from causing trouble – thanks for the notification! 🙂