Hello guys, after another productive week we are happy to announce that Patch v0.9 is ready for download! We believe it will push Out of Reach in a whole new direction and let us focus on a new kind of a gameplay.:) To the point…

Posted by spaceboatstudios on Aug 15th, 2015 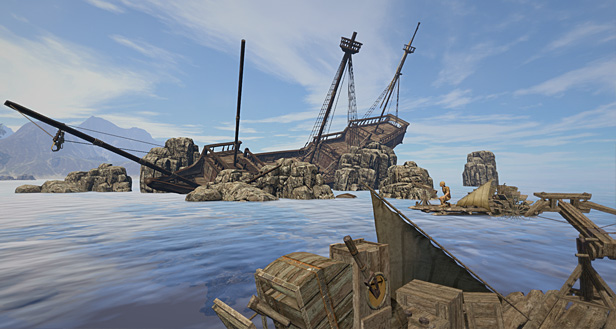 Hello guys,
after another productive week we are happy to announce that Patch v0.9 is ready for download! We believe it will push Out of Reach in a whole new direction and let us focus on a new kind of a gameplay.:)
To the point… 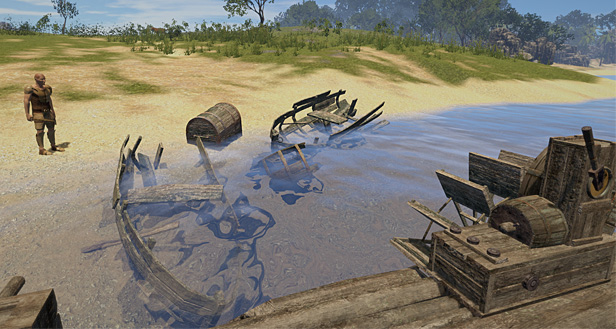 One of the most common wishes on the Steam forum and feedback emails comes true!:) From now on you will be able to find random loot on beaches and other places where sailors – like you – were looking for a dry land.. but didn’t make it. Every morning, everyone has a chance to find one of the several chests and collect gold from it in order to upgrade a Builder’s Desk and extend protection time of a base up to 72h!
As we decided last week to work more on the pirate thread of OoR, we were obliged to crash at least one galleon on the rocks near the islands. So here it is, and you should visit it from time to time, daily treasures can be found also there.:)

Another idea from our players (a really nice one, by the way) is to be able to find special and rare non-craftable items. We have already a pirate hat, compass and steel armour elements on the list, feel free to write in comments what else would be great to find in treasure chests!

Although the treasures will continue to develop in many ways (we want to include maps and some kind of competition between players), we are going to give some of the team members another really hot topic to work on – the “more complicated” food. Right now it’s possible to find edible plants or hunt animals on the islands. Harvesting and hunting is pretty simple and works well. To make it more challenging/interesting we’re going to implement in the upcoming weeks some more ideas from the forum including “buildable” fishnets, falling coconuts, seeds to sow and plants to grow. It should also involve some new actions to take like baking or watering in order to receive new kind of food.

Here’s the full changelog of Out of Reach v0.9:

- Migration to Unity 5.1.1p2 engine.
- Proper tooltip when trying to put on a “non-wearable” item.
- Chests that are not connected to any Builder’s Desk are now marked as “destructible”.
- 10sec timer when trying to log out. 20sec timer after losing connection. During this time player’s character stays vulnerable.
- Trebuchet’s projectiles ignore ladders and diagonal poles.
- Opening character window does not interfere with the world’s shadows.
- All the buildings that lost its Builder’s Desks due to trebuchets before patch 0.8.9 and are not rebuilt till now – lose the owner.
- Ship wreck with a possible treasure chests. Players can’t build around the ship.
- Stepping on a trip wire while crouching also triggers it
- 2 new tutorial pages

NEW! Treasures:
* Each night the ocean will throw boat wrecks and chests of poor sailors who just didn’t make it to the beach.
* The chests will contain gold and – along with the next patches – chance for non-craftable, rare and random item.
* Gold can be used to upgrade the Builder’s Desk to level 6 which gives 72h protection.

Treasures appear at random places all over the archipelago’s beaches. Our goal is to make you travel, search for them and use them to trade with each other or collect enough to upgrade the Builder’s Desk. The amount of rare items to find and upgrades to make (using gold) will increase along with the new patches.