Welcome back to another (belated) Verdun Community Update. This week no weapons (there are plenty to come though!), but the announcement that we will be starting closed beta access to the upcoming map "Douaumont".

Welcome back to another (belated) Verdun Community Update. This week no weapons (there are plenty to come though!), but the announcement that we will be starting closed beta access to the upcoming map "Douaumont".

To celebrate this, here are two promotional teaser screenshots of a french assault on Fort Douaumont: 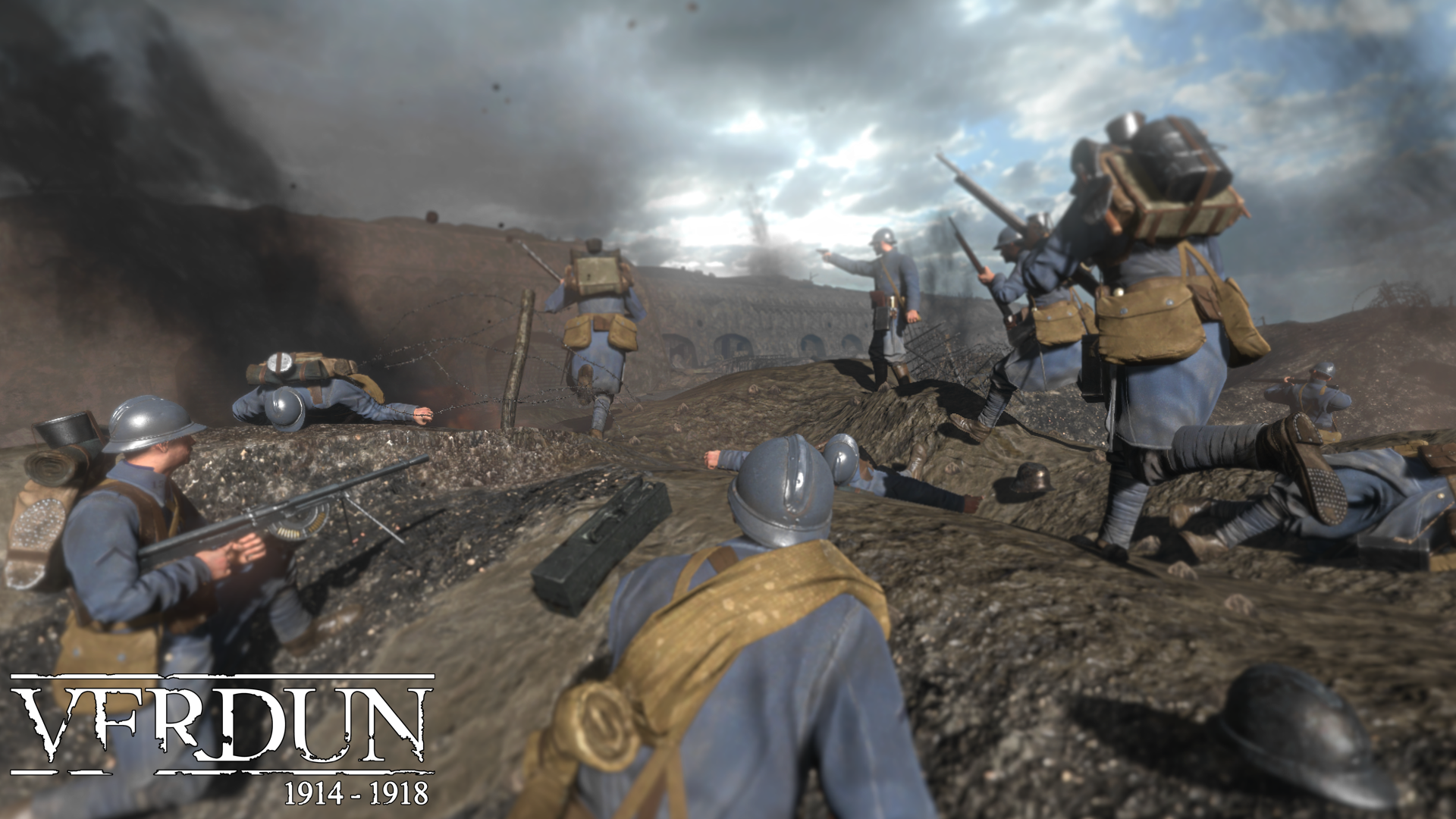 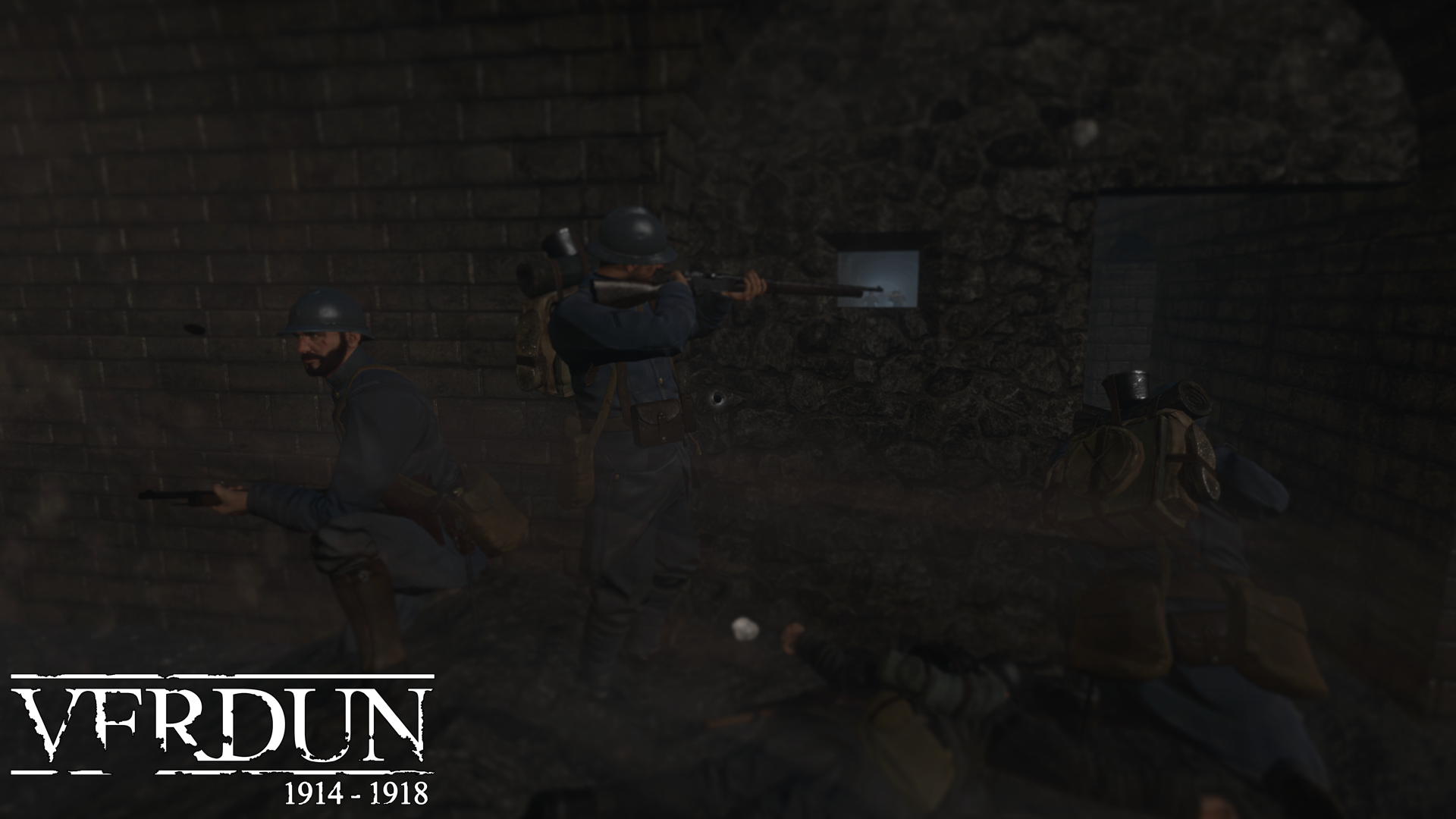 Soon you will be able to mount your own assaults on the fort with your squad! Keep an eye out on our facebook page, as in the next few days we will be teasing the map some more!

Earlier during the war both French and Germans experimented with explosives tied to wooden sticks. The Germans actually took this concept and created the infamous “stielhandgranate” (stalk hand grenade) line of grenades. While the M1915 which is currently in-game has the simple string taped to the stick, the M1917 model (5.5 sec fuse) used a cap at the bottom of the stick to prevent both humidity from affecting the string and offering better safety (far more difficult to accidentally detonate). The cap had prongs lining the bottom of it to allow for better grip in the muddy trenches.

We have also decided to include 2 “geballte” ladung (concentrated charges), effectively an improvised explosive made by the Germans out of several of the m1917 stick grenades. It was used nearer the end of the war to counter allied tanks. The main disadvantage with these bundled grenades was they could only really be thrown short distances (due to obvious weight issues) and this makes for a far riskier task for the grenadier getting within range of target. 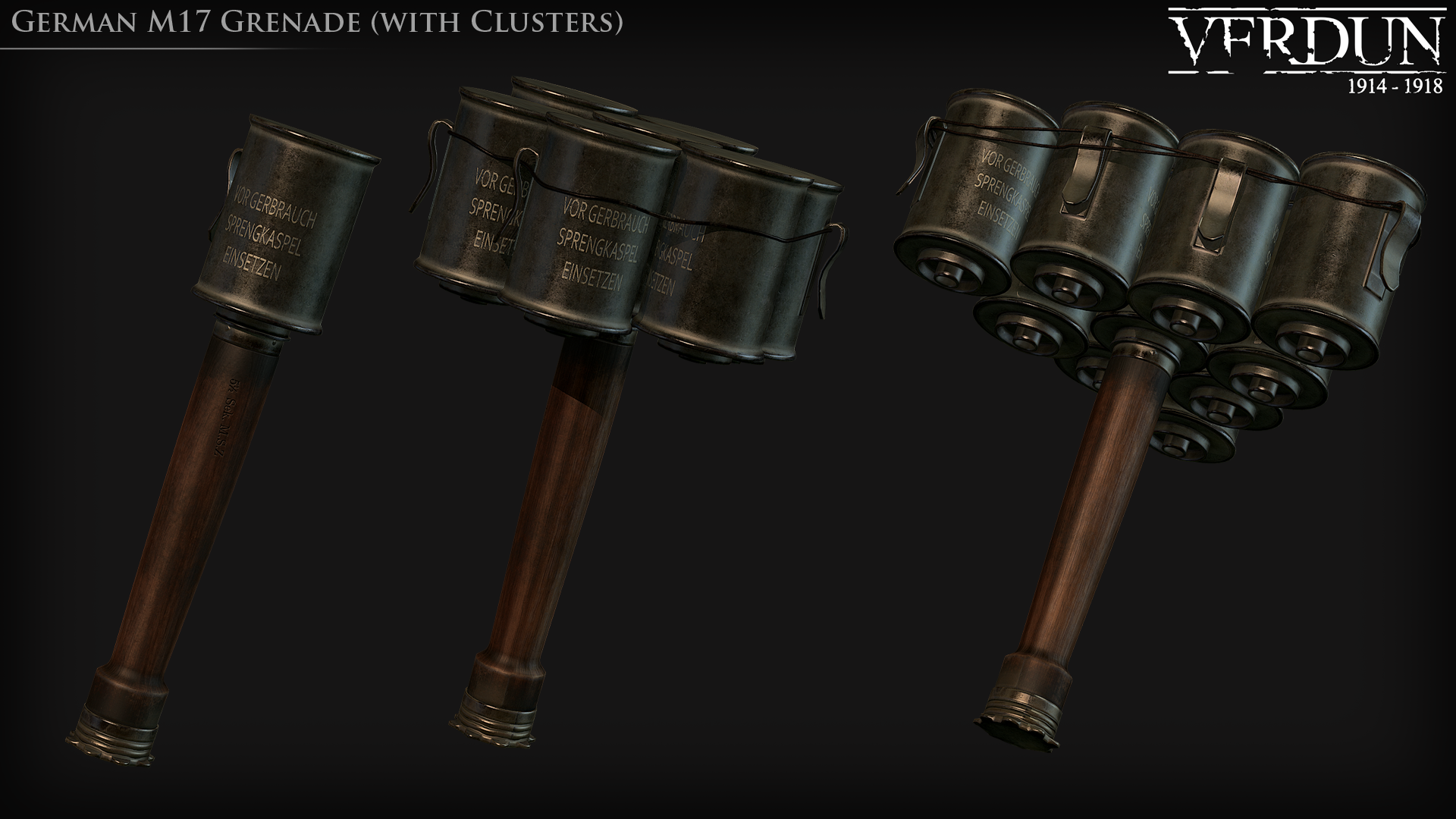 Ingame the updated stielhandgranate and “geballte ladung”s will be in the hands of the German Pionier units. With extra explosive power to deal with enemy strong points. More information about the new units will follow in later installments.

When the U.S declared war on Germany in 1917, it was far from being equipped enough to handle a conflict of the scale seen in WW1. The standard issue rifle for the U.S army being the Springfield 1903, there were not enough 1903 rifles around to equip the influx of soldiers that joined the army. The U.S government faced two options, convert its factories creating Pattern 14 rifles for the British to factories capable of creating the Springfield OR simply rechamber the Pattern 14 to the U.S round. The latter option was chosen, it was the quickest, cheapest and easier option to go with - and thus, the P17 came to be. The rifle itself was a successful rifle, boasting decent accuracy and a reasonable rate of fire … though many U.S soldiers would still swear by their 1903 Springfields. 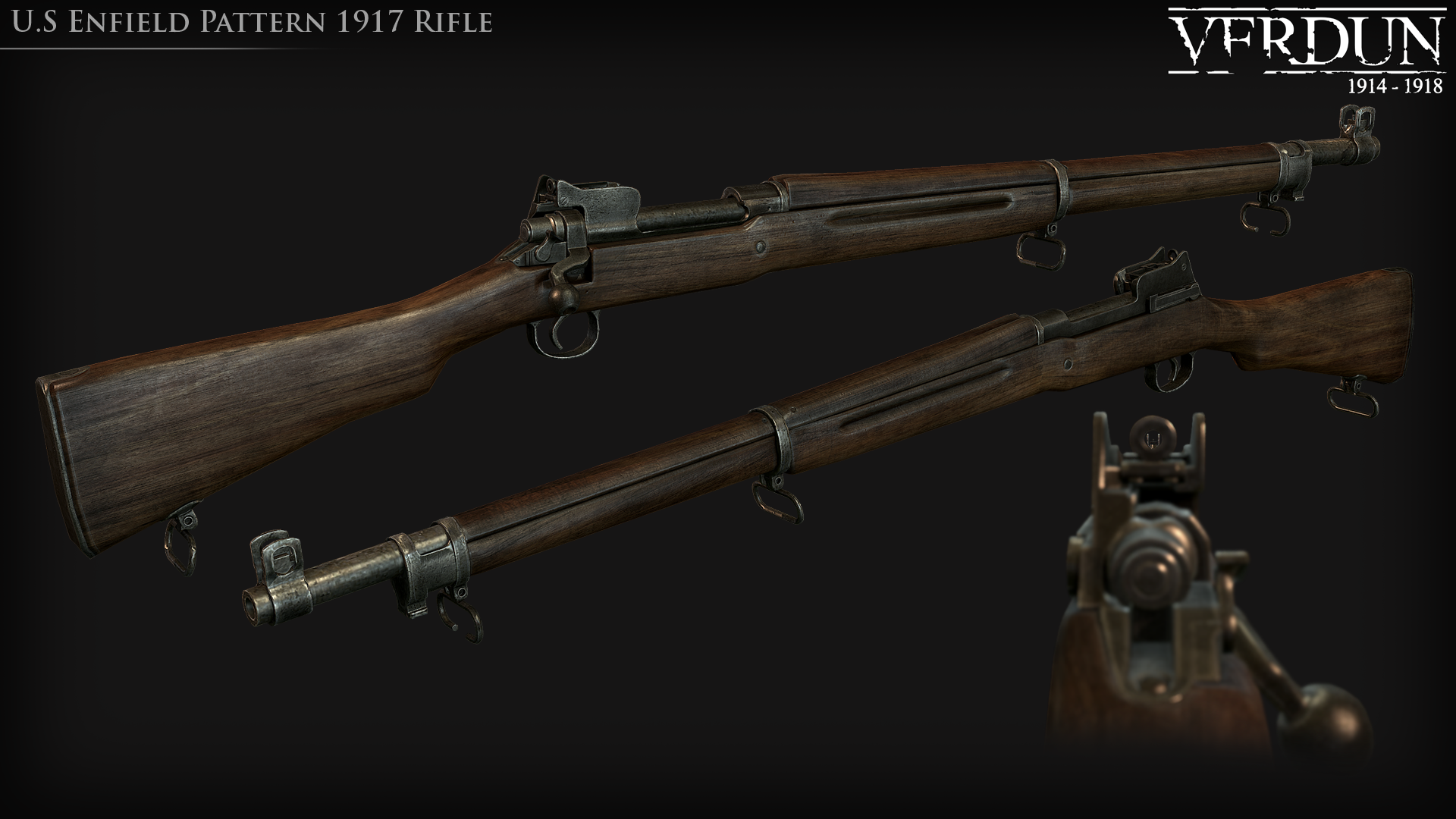 The P17 will be the main battle rifle for the U.S ‘doughboys’ - with reasonable accuracy and a fair rate of fire, this rifle will very much so feel at home in the trenches.

The British army had been using revolver style side arms for officers and other units ( artillery etc) for some time. It was very slow to pick up on the idea of a semi-automatic firearm and was seemingly steeped in the traditions of its wars in Africa and other parts of the world … where a hard hitting revolver was all that was needed. While the Webley & Scott only really saw official military issue in other branches of the armed forces (Royal Navy, possible trials in the Flying Corps) the pistol was a popular private purchase weapon for those officers who had the funds available. Chambering the same powerful .455 round as the revolver, and offering 7 rounds for the users disposal it was a marginal improvement on the Webley MKVI 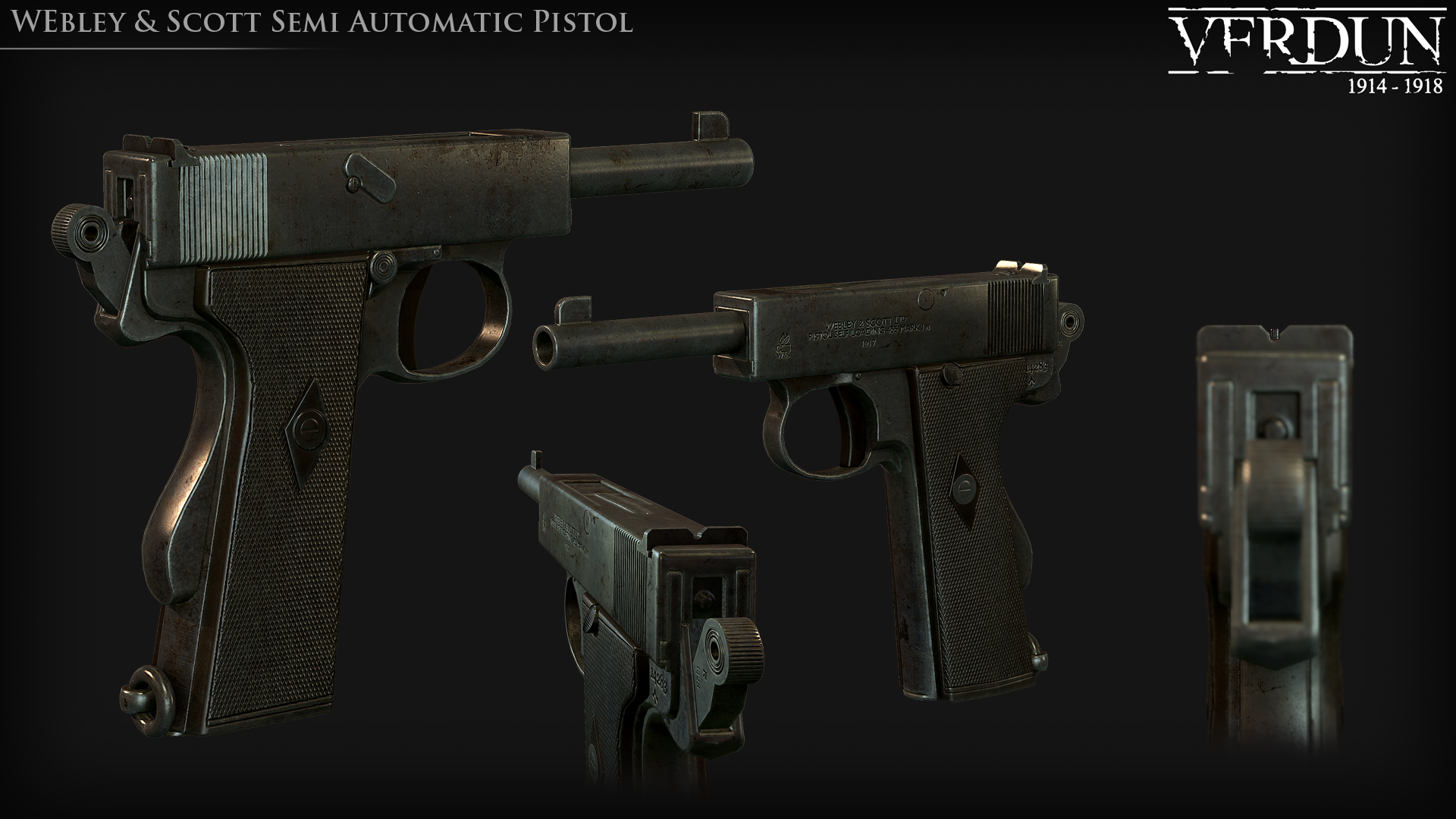 The W&S MKI in game will see a hard hitting round, good rate of fire and reasonable reload speed, but it still falls somewhat short in regards to performance and capacity vs some of the other small arms used within the theatre.

Again our efforts to deal with performance spike issues continues. We have found some issues with the way character art is being loaded from the disk resulting in massive stuttering. To deal with this we are building a new system to render the characters, however there are some engine limitations with this so we are forced to find a work around. As you may have guessed, that does means a slight delay in the performance updates. We expect a performance patch to be able to go live before the weekend if everything works out with the new engine update and loading system. In addition we hope to have dealt with the hike in performance and some bugs related to invincibility as well. The update should also tackle the issue where people are experiencing crashing when loading levels.

For those who didn’t notice, during the halloween sale, rats overran the main menu! This was only visible during the 30th and 31st of October 2015.:

Our main focus this week, however, has been releasing the update. We have had some issues with the new load screen mechanic. Which actually now displays several historical images, maps and high-quality in-game scenario screenshots. Here are some examples of this new system: 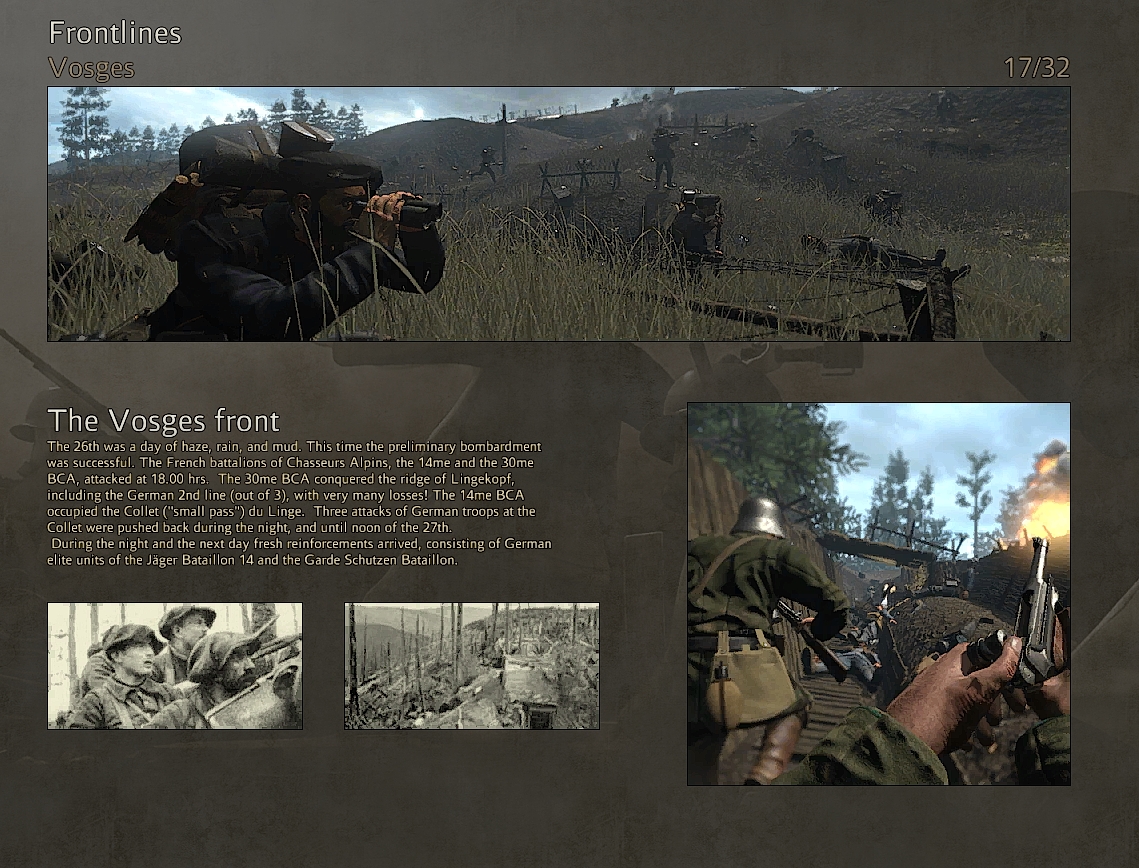 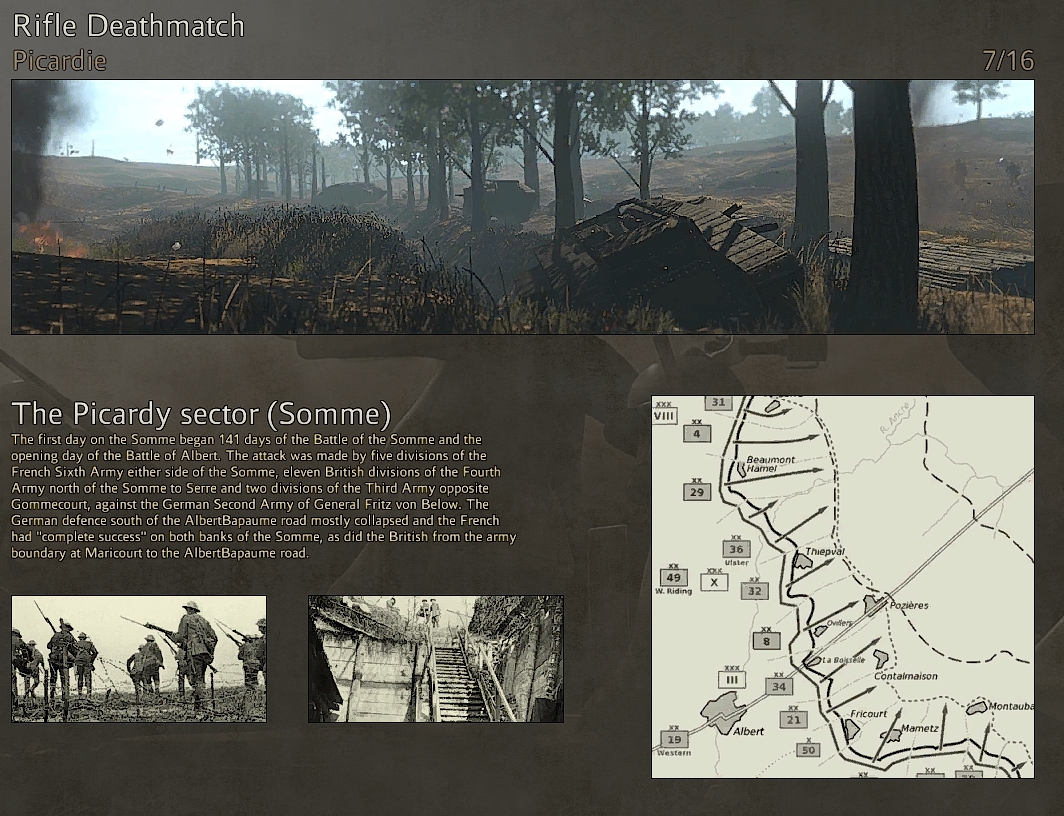 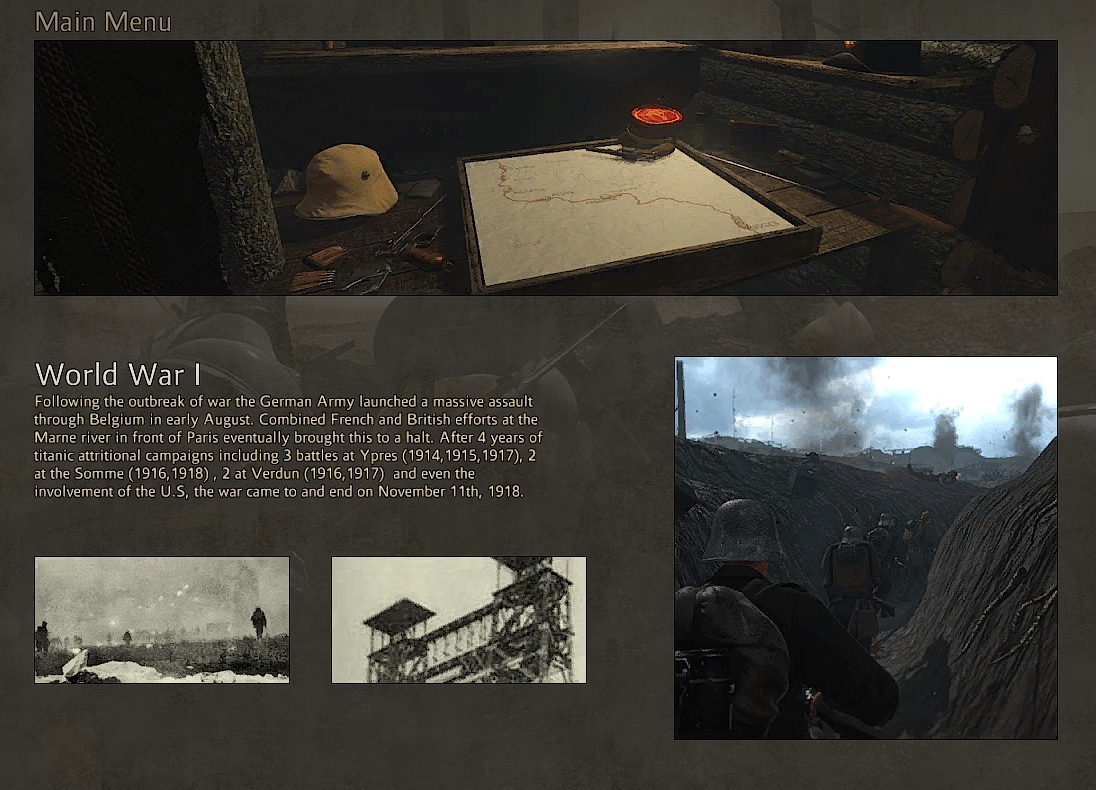 The information about the sectors is still work in progress, currently the text specifically mentions one playable scenario, but in the future info will be available on numerous historical scenarios. More generic text providing information on the entire frontline sector (such as artois or vosges) will also be added over time.

Tests last week with the upcoming Fort Douaumont map proved that A) The map is awesome and B) has several issues that need to be resolved. Most importantly we had errors with the way the fort was being rendered, we’ve been exploring fixes for this. Secondly we had to change the way the capturable sectors were ordered. The scenario for Fort Douaumont is the French Assault on the fort on the 22nd of May, 1916. In this assault the French succeeded in capturing some locations on the site. They were violently repelled. In light with this, and gameplay mechanics (fighting down the long hallway proofed a challenge). We decided to change the sectors as to better reflect the fighting and concentrate the battles more around the western side of the fort.

An impression of the massive scale of Douaumont (In-game)

On the weapon front things are advancing well asol, we hope to have finished animating most existing firearms by the this week and then new set in the coming week, ready for trials. One of the latest additions is the hard hitting Reichsrevolver, which due to it’s difficult reload and single action mechanism will certainly be a weapon for the veterans!

A British soldier falls victim to poison gas at the Battle of Loos, Artois 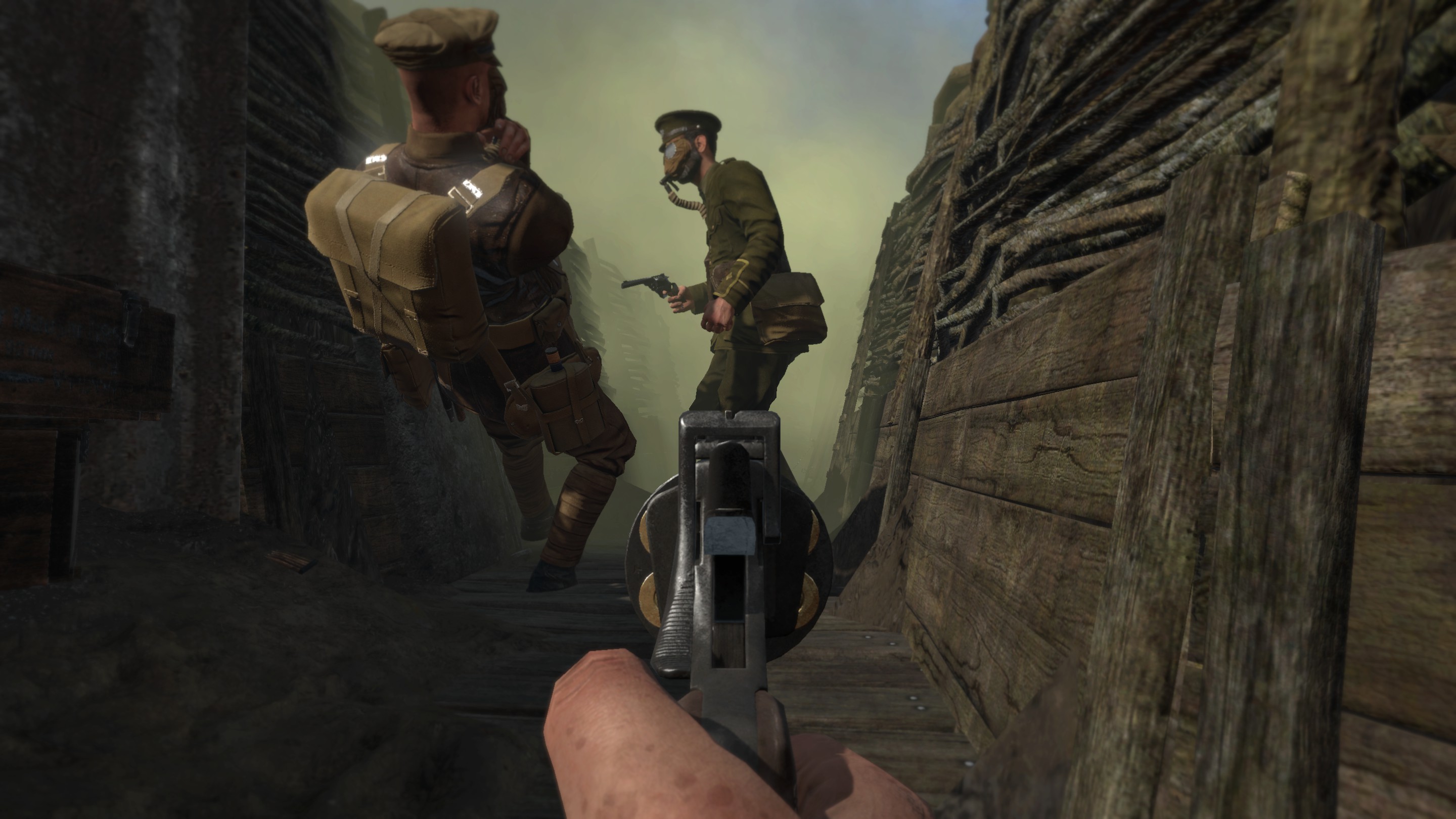 A dramatic defence of a trench in the Ypres salient: 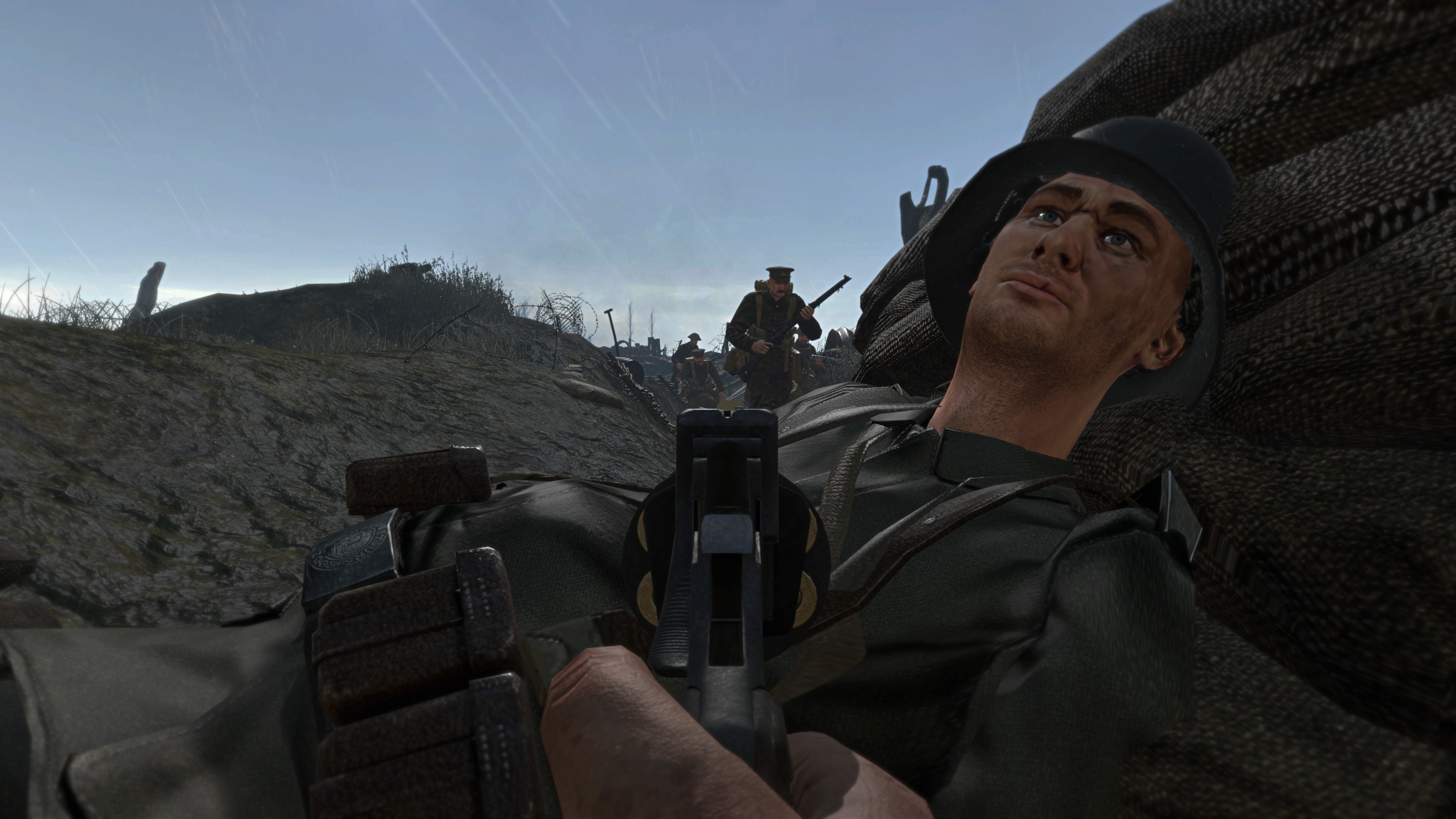 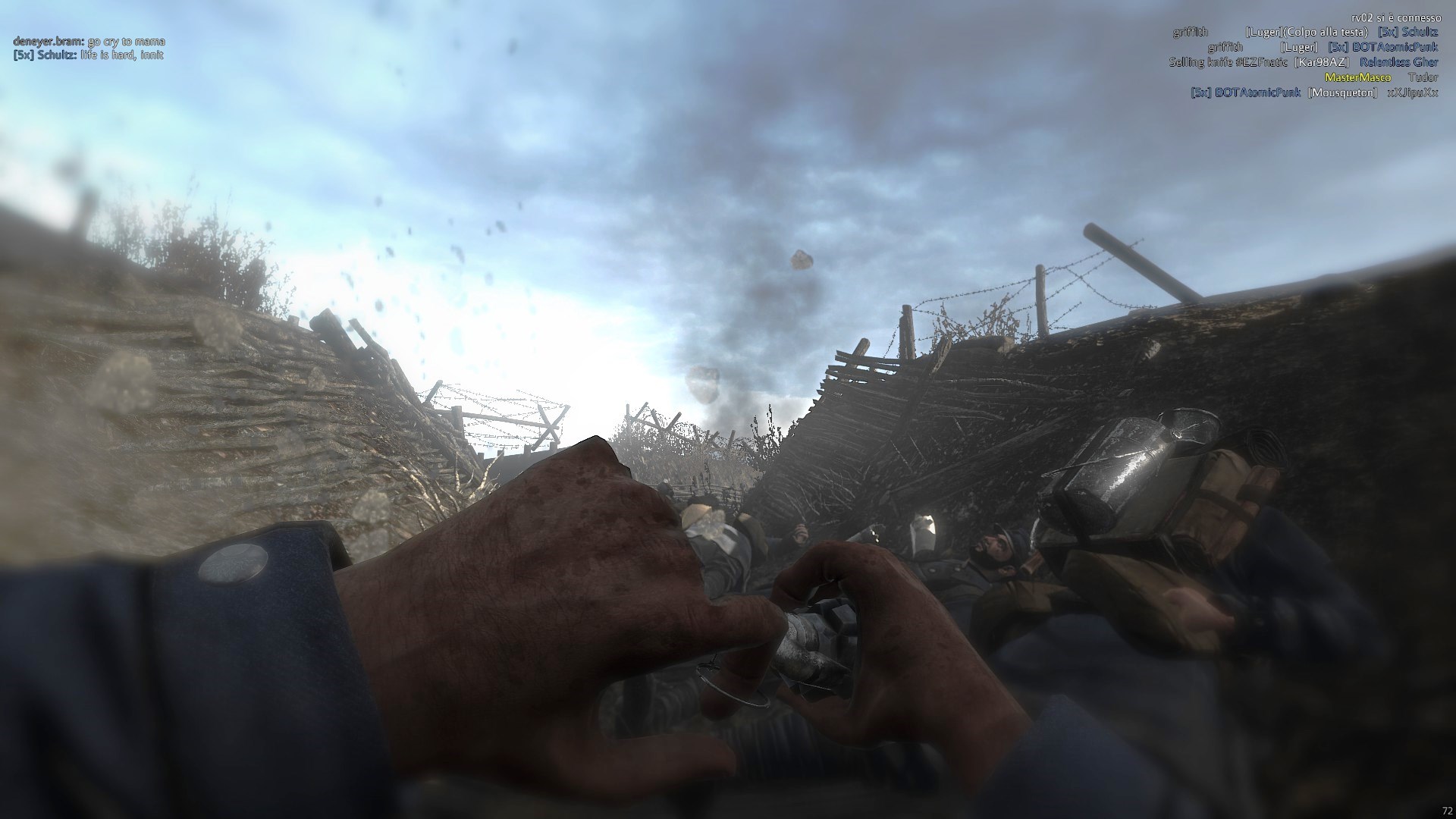 That will be all for this week. Tune in next week for more!