The relationships between Settlements are greater than those between player. Each Settlement is capable of representing a few to hundreds of players. The official standing between Settlements is determined through Forum activity and Diplomatic actions. Raising or lowering this rating requires players to vote on each other's posts and send diplomatic gifts or insults through actions.

Diplomacy
The relationships between Settlements are greater than those between player. Each Settlement is capable of representing a few to hundreds of players. The official standing between Settlements is determined through Forum activity and Diplomatic actions. Raising or lowering this rating requires players to vote on each other's posts and send diplomatic gifts or insults through actions. 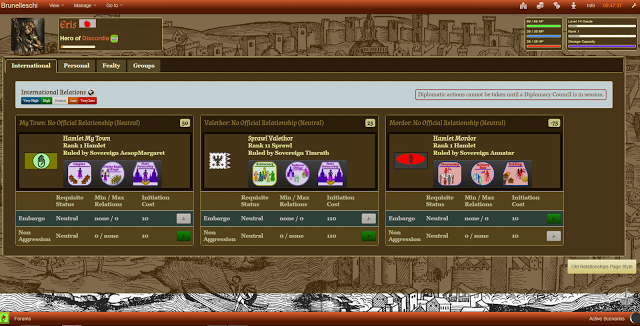 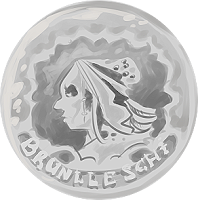 There are eleven possible Relationships that can be held between two Settlements.

Neutral:
All Settlements start with a Neutral relationship with all other Settlements. This state costs nothing to maintain and has no standings requirements. No matter what the current Relationship or Standing is between two Settlements, they can always back down to Neutral. Neutral settlements can openly Praise, send Messages to, and publicly Denounce each other. From Neutral a Settlement can propose Non Aggression with or declare an Embargo on their neighbors.

Friendly Relationships
Non Aggression:
This relationship is a promise between the two Settlements not to attack each other. Settlements with a Standing of 0 and above can enter Non Aggression. These Settlements are then able to Praise, send Message and give Gifts but cannot publicly Denounce each other. In fact, they're not allowed to take hostile action against each other at all.

Trade Treaty:
There are two powerful benefits to the Trade Treaty. The first is linking of the Internal Markets. This causes your Markets to become more accessible to each other's governments and citizens and removes tariff payments when trades occur between the two Settlements. The second is the ability to Gift each other's governments with Combat Units. In order to initiate a Trade Treaty, Standing between your Settlements needs to be at a reasonably friendly level.

Defense Pact:
The Defense Pact is the next layer of Settlement friendship. This is a serious commitment between settlements and their friendly Standing needs to be pretty high. Units on the same battle field will be considered friendly and Settlements will be able to participate in each other's Defensive scenarios. That means if a third-party settlement declares war on either of them, the other will be able to pitch-in. However, despite who started the war, Defense Pact buddies can only help in defensive battle scenarios.

Friendship Treaty:
Settlements who have a Friendship Treaty must be very fond of each other before this point can be reached. The people of these friendly Settlements will be knit more tightly together when they gain access to each other's forums. Citizens who've become enamored with the other settlement are now able to visit, if the receiving settlement has an Embassy or other visitor housing building.

Alliance:
The ultimate sign of good will between two Settlements, the Alliance. Full-power Allies will be able to help each other win aggressive scenarios.
Ex: Oldland and Newland have an Alliance. Oldland opens hostilities with Otherland that eventually blossom in to a Field War. Citizens of Newland can not only send Oldland NPC troops, but can help Oldland win it's combat scenarios with contributions. This extends vastly the power of Defense Pacts, which only allow settlements to defend each other from outside war-like efforts.

Hostile:
With an reasonably high negative Standing or lower, a Settlement already in an Embargo can declare themselves Hostile toward the other Settlement. Despite the previous situation, whoever upped the aggression first takes the place of the aggressor. They pay the initiation cost and the upkeep for their initiated aggression level. Hostile Settlements are able to launch attacks on each other's External Districts. This is the beginning of the invasion, occupation and conquering scenario trees.

Field War:
You're not just border-raiding mad anymore. With a large collection of negative Standing, you can declare an aggressive war. Once a Field War is active both Settlements can begin attacking each other's Defensive districts. They also both have the option to launch a Siege instead of a normal Assault scenario in order to wear down the enemy Settlement. 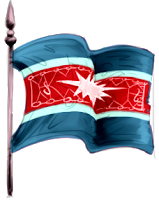 Extermination War:
Declaring an Extermination War requires both a massive build up of hate between Settlements and a heavy Platinum cost. However, with this destructive Relationship active, attacking Settlements gain the ability to destroy the buildings of conquered districts. This means that a very determined warlord could methodically defeat, occupy then flatten every district in an enemy settlement. Renaissance era cities are sturdily and built and are reasonably difficult to raze.