A chat with Kevin Wicks, contract art director & oar brother, about the art style of The Great Whale Road.

How would you describe the art style of TGWR?

The short answer is that it is a contemporary comic-book style take on the medieval period. Our esteemed leader and all-round supreme generalissimo had a vision of the style following European comics and classic comic books such as Prince Valiant. The talented artists then gave this a digital makeover, it is drawn using clean, uncluttered lines and coloured using only a small range of shading, minimising the comic style approach of cross-hatching and ink-work. The challenge was to re-create a distinct ‘traditional hand-drawn and painted’ look to denote the historical feel of the game. The colour palette matches the rough and ready tone of the era, naturalistic and not overly saturated. 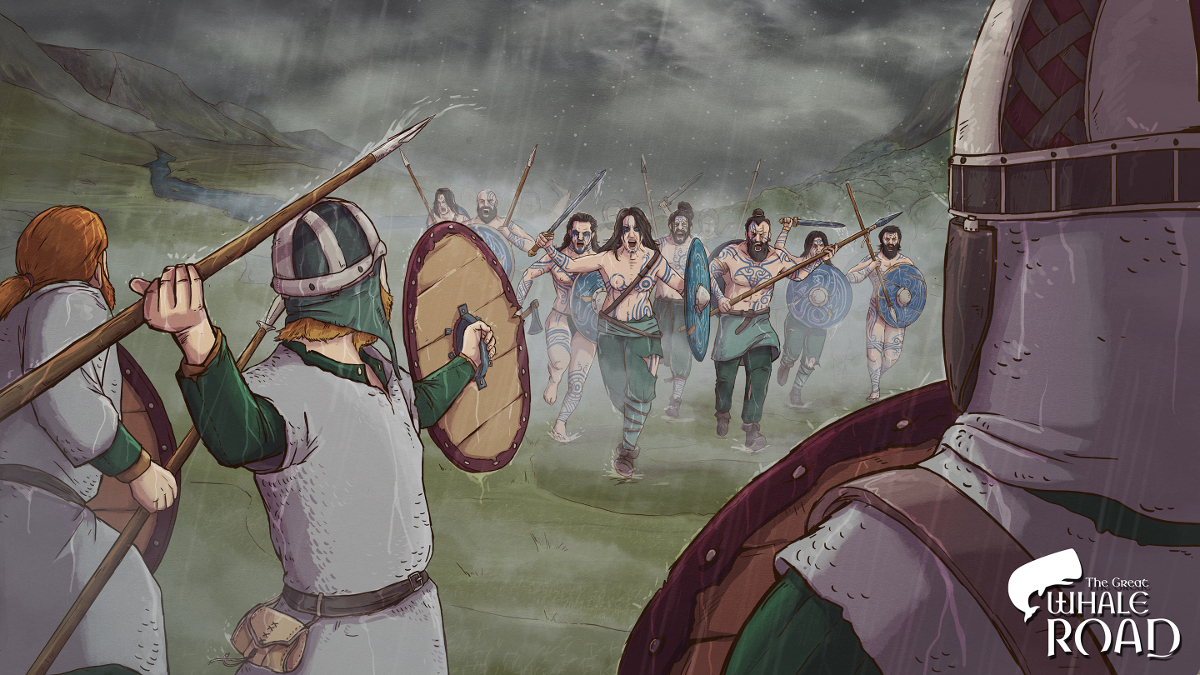 How has the style evolved since the concept stage?

A number of variants were created at the early stages, ranging from colourful cartoon-style to realistic, and eventually the style settled on a semi-realistic comic-book approach using ink outlines for visual clarity, which perfectly suits the feel of the game. We eventually found reference of modern-day rugby players who had the requisite level of ferocity and attitude. 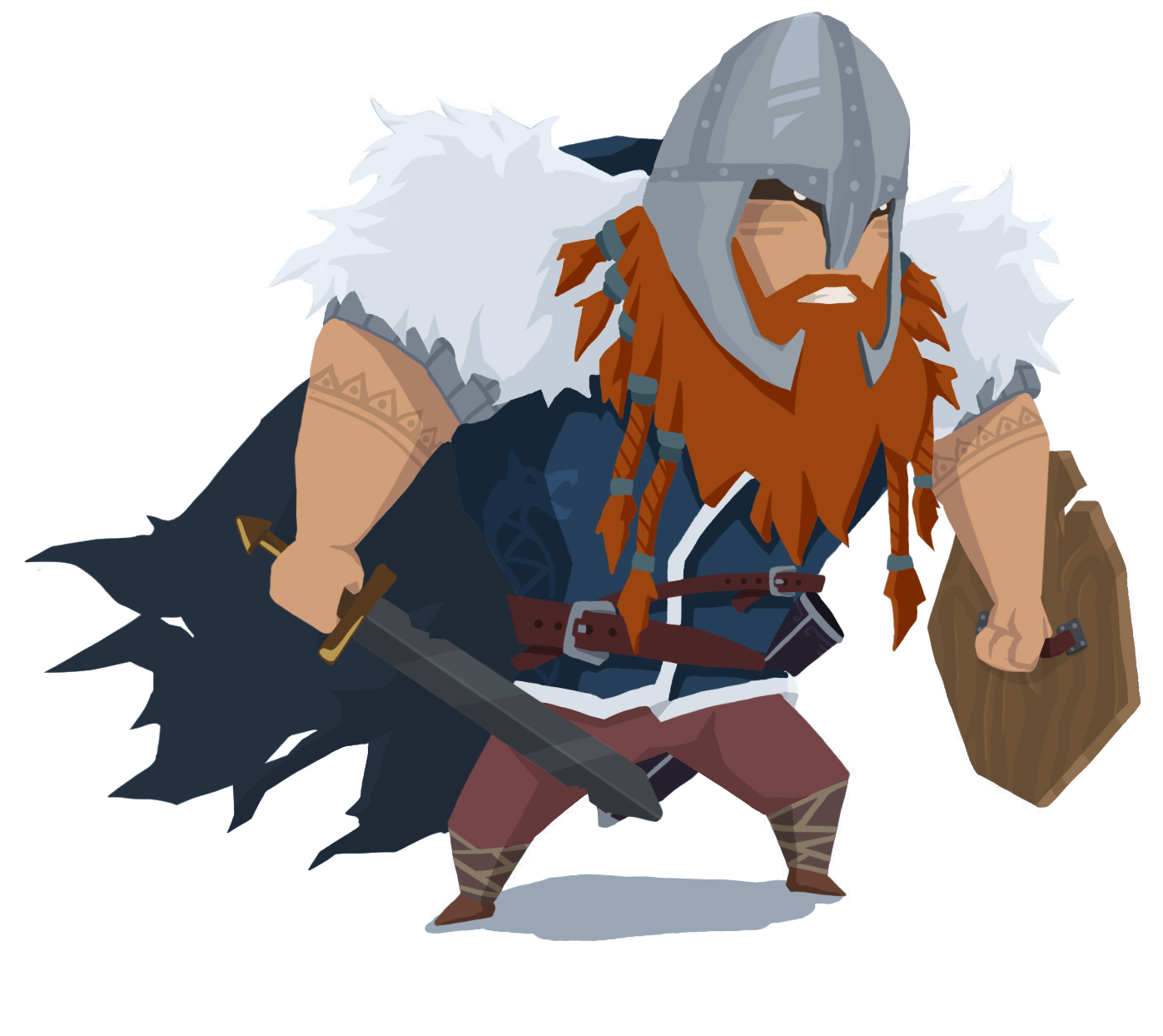 What are the challenges of this approach?

The biggest artistic challenge was to avoid a ‘computer-generated’ look. Also, when using ink-style outlines in a game, it’s essential that the character source graphics are all created at a similar size, so that when exported into the game itself, the size of the ink outline remains consistent, without appearing to become thicker or thinner randomly.

How historically accurate are the game’s characters?

The wealth of historical reference has been incredibly useful for helping to set the tone for the clothes, weapons, jewellery, artefacts, etc. across the various cultures that co-existed, occasionally peacefully, around this time-period. Some small liberties may have been taken purely to ensure that the cultures (and the characters within them) have a cohesive and distinct look for clear differentiation. This is only a small artistic license; the writers made sure that the game is as accurate as possible.

What about beyond the characters, the backdrops and scenery?

To keep things simple and retain focus on the characters, a receding level of detail is used on the backgrounds until they become almost impressionistic, with the addition of suitable atmospheric effects such as fog, mist, rain for depth-cueing. This is used to great effect on the ‘scene-setting’ side-scrolling animation of the ship travelling along the coastlines.

Tell us about the visual effects used in a game like this.

Visual effects bring a scene to life, and in this case simple things such as atmospheric weather effects plus birds, water, spray and the occasional blood spatter are used. Many games use sparkles and glows and all kinds of effects to grab attention, which here would have been wildly inappropriate; in this game a more subtle approach is needed, staying true to the overall style.

What about the addition of the user interface, on-screen display elements and the front end?

All these are derived from the naturalistic style, using a hand-painted look. It can be difficult to make these abstract graphic overlays fit a historical style without appearing intrusive, out of place or overly contrived, but the artists have managed to balance this very well and have created an authentic and coherent look.

What was the most difficult visual element to create in this game?

Probably the combat screen, which evolved gradually, going through several iterations and designs, until a suitable layout and orientation was settled upon. This wasn't ‘difficult’ to create visually, as the ship and characters followed the game style, but the art had to follow the functionality, which was a lengthy development process and was tested to destruction several times.

What does it mean to be a ‘contract’ art director?

I was engaged mostly at the early stages, to help out and get things started, with occasional part-time input afterwards. The downside is that as the artists rapidly develop, they leave me behind in the dust (laughing as they overtake me). I would suggest that they take it in turns to be art directors themselves, why should I have all the fun stuff like scheduling and task-management?

Kevin has 18 years experience as a videogame artist plus a few years working in comic books before that. He has been involved in all aspects of art and graphics production, working on a wide range and style of projects. His game credits include 'The Simpsons Tapped Out', 'Gunstringer: Dead Man Running', 'South Park: Tenorman's Revenge', 'Alien vs Predator', 'Star Wars Battlefront: Elite Squadron', 'AvP: Requiem', 'LEGO Soccer Mania', 'Mercury Meltdown', 'Conflict: Desert Storm', 'Warzone 2100' and 'XCom Apocalypse'.