Some early screenshots from Diaspora : Shattered Armistice and a quick update on how the game is progressing.

Work is progressing nicely on Diaspora's first release Shattered Armistice. As mentioned in the first announcement the storyline will follow the crew of a battlestar (not one we've seen in the show) as they attempt to fight back against the Cylon attack on the colonies.

Since the Battlestar Theseus is still in the modelling stage here are a few shots of some of the other ships that will feature prominently in the game. First of all, the Cylons. 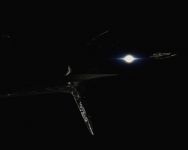 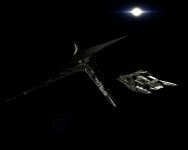 Shattered Armistice will include the Cylon Raider (Both the original and the Season 4 variant) amd Heavy Raider as player flyable in multiplayer and 3rd party mods. If we get time we'll make some skirmish missions up so that people can fly them in singleplayer too but the mission editor is so simple to use that we expect to see them appearing a week after our release even if we don't.

Also included in the first release is the Prometheus which you may remember from the episode Black Market. 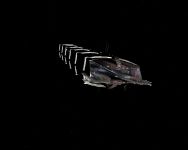 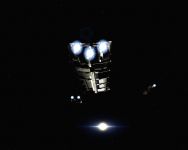 The mission design team are still working hard on putting these ships into missions. Work is going so well at the moment that we're already fleshing out ideas for a multiplayer coop campaign for Shattered Armistice too.
Comments

Sweet! Another BSG game. It's looking very promising so far. Keep up the good work.

NICE! Beyond the Red Line and now this! One can't have too much Battlestar Galactica. I'm more than a little intrigued to get a good look at the capital ship that's going to star in this series. From the looks of the video, the team is more than capable of pulling off some amazing looking craft. Keep up the hard work, and THANK YOU for it!