It turned out to be December as our best month to sum up the results of our work so far, as well as give you some info concerning our plans for the upcoming year. This is why we are finally ready to present You our third Dev.Log, which will be our final one for this year and it will be published in three parts!

The year of 2015 is coming to an end. The christmas holidays are coming and many of you are already probably making preparations for them. This is, obviously, one of the best times of the year when everyone come together and spend time with their friends, relatives and close people.

It turned out to be December as our best month to sum up the results of our work so far, as well as give you some info concerning our plans for the upcoming year.
This is why we are finally ready to present You our third Dev.Log, which will be our final one for this year and it will be published in three parts!

Each part will summarize specific topics which are closely connected with core gameplay elements and game mechanics of Lost Story. For a long time our team could not decide on how much we can reveal as of now. Since the third Dev.Log is going to be divided into three parts, we've decided to split topics into two groups: "New additions to combat system and stealth walkthrough possibilities" and "Friendly NPC control system".

As you may have noticed, we will not be talking about the actual plot any time time soon. Such material requires much more preparation and attention. But don't you worry. We don't want to follow the Hollywood "trend" so popular lately: we are not going to spill all of the story-related information beforehand, but we will be able to share some detail in the future.

The first topic for today is

As you may have remembered, we've already covered the combat system before, and we've told you about testing it with some NPCs, using the shooting through walls. This time we'll go deeper into this topic and we are going to tell you about another feature that we've been testing, which is...covering system! With...destructions! But do not be afraid, no rolls here. This is a first person Half-Life after all! But we all do love... 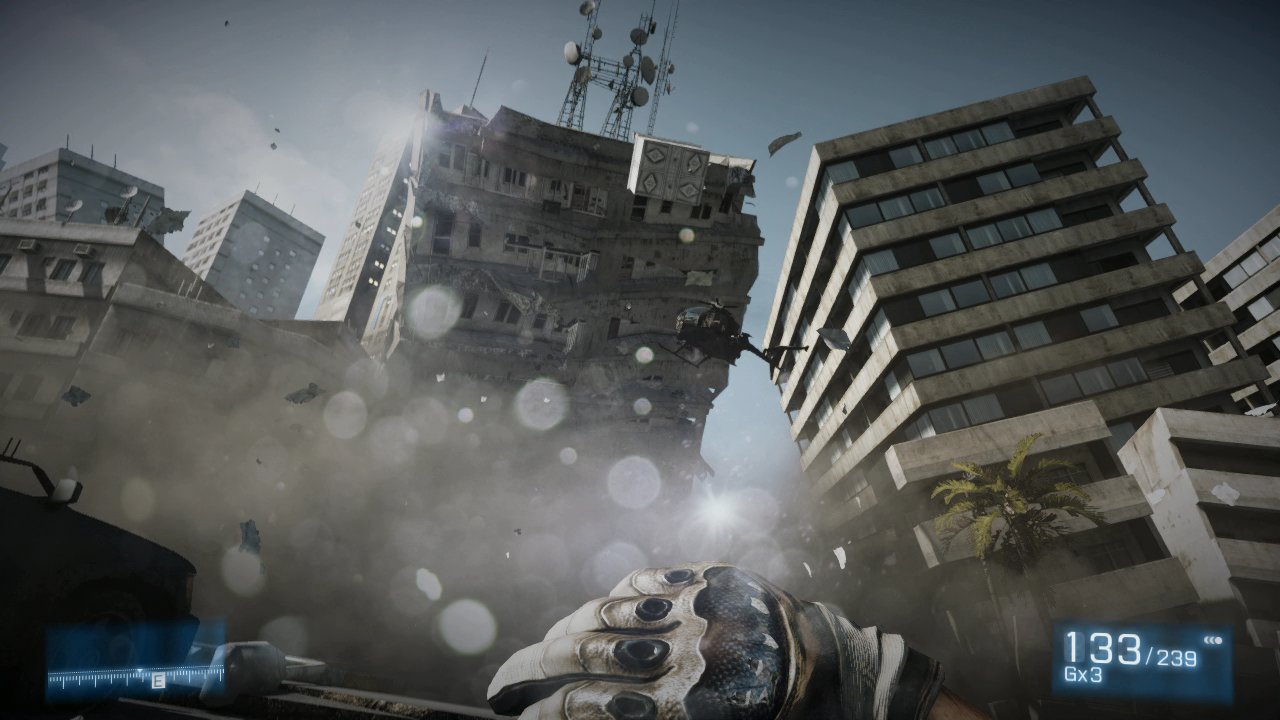 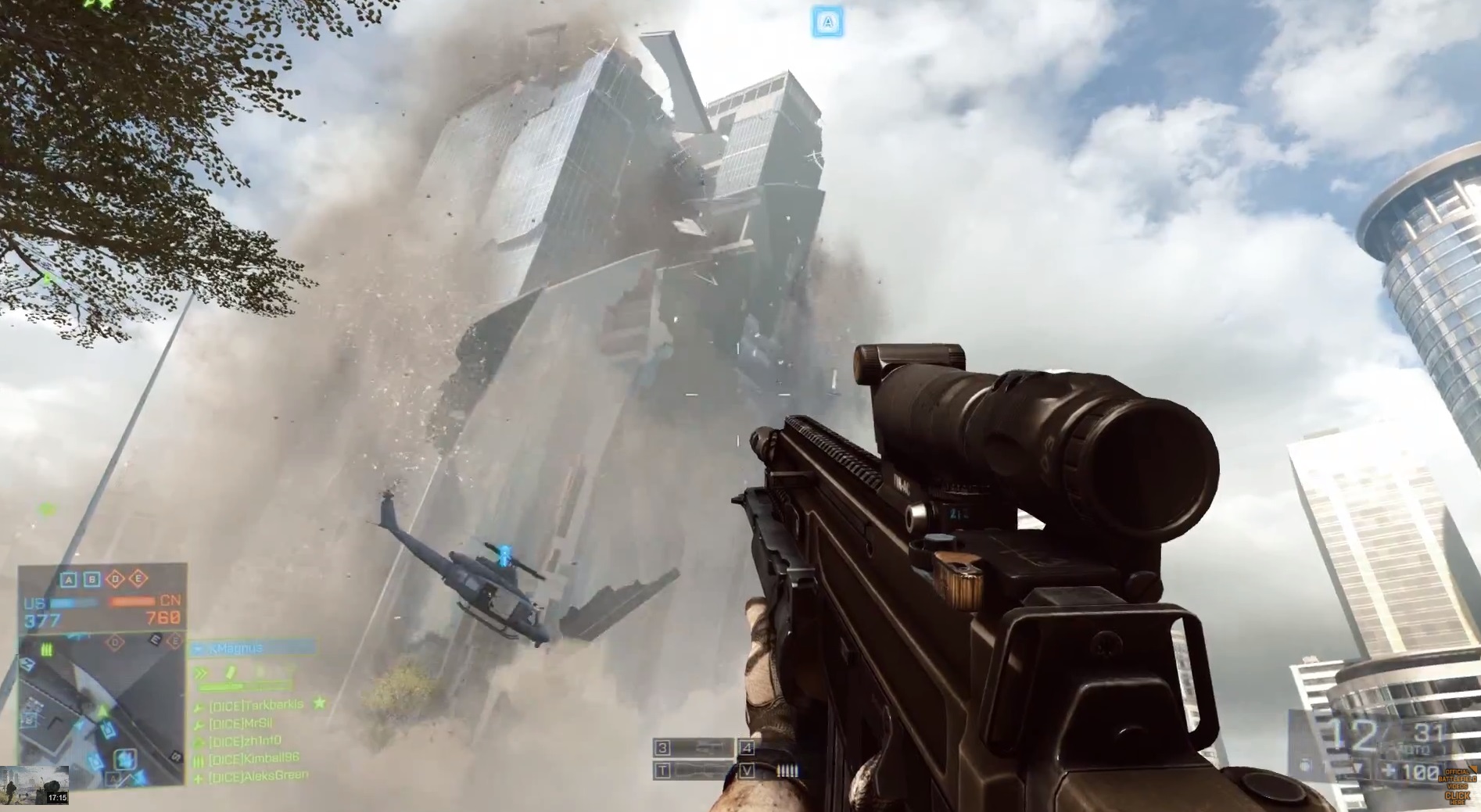 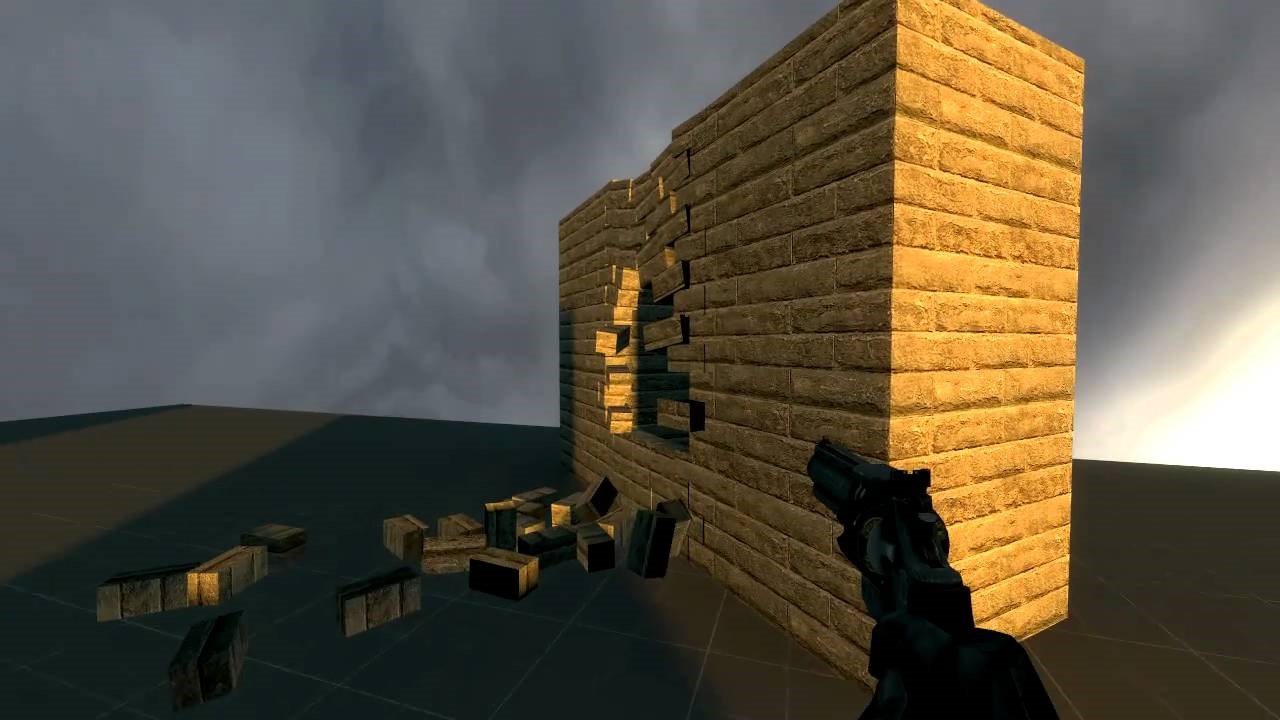 Unfortunately, most of the destruction elements during the last 5 years in games were created based on the pre-rendered animations. Of course, such animations may look amazing on big buildings or big objects, but such destructions cannot be applied to smaller objects, like cinderblocks, walls, shelves and other smaller objects, that we want to destroy so desperately during the shootouts.

It seems as we could calculate lots of variants for object destructions that would depend on the direction of the applied damage and record them in the number of animations. But, however, it would not add the realism to the game, and creating such animations for each cover model and setting of every model would be a dreadful and choring process that would only waste time.

Despite that we have a solution that Valve had implemented for wooden tables, boxes and other physical objects. To implement this in the game, we will split the models into certain parts/segments. Such system will help us in keeping diversity among the covers per location and having a realistic destruction system during the fights. Nevertheless, implementing such feature will take some time. But once the tests are complete, we will certainly let You know!

We will attach the video from the test scene where you can see this combat system and AI changes in action. Enjoy! (:

The second topic for today is

Our main goal is to create a system that would let the players to evade certain fights by utilizing stealthily approach if they want to. For a stealth walkthrough the players will presented with special settings as well as a special radiolocator that catches the frequencies of the enemies and mark their location on the device's screen. 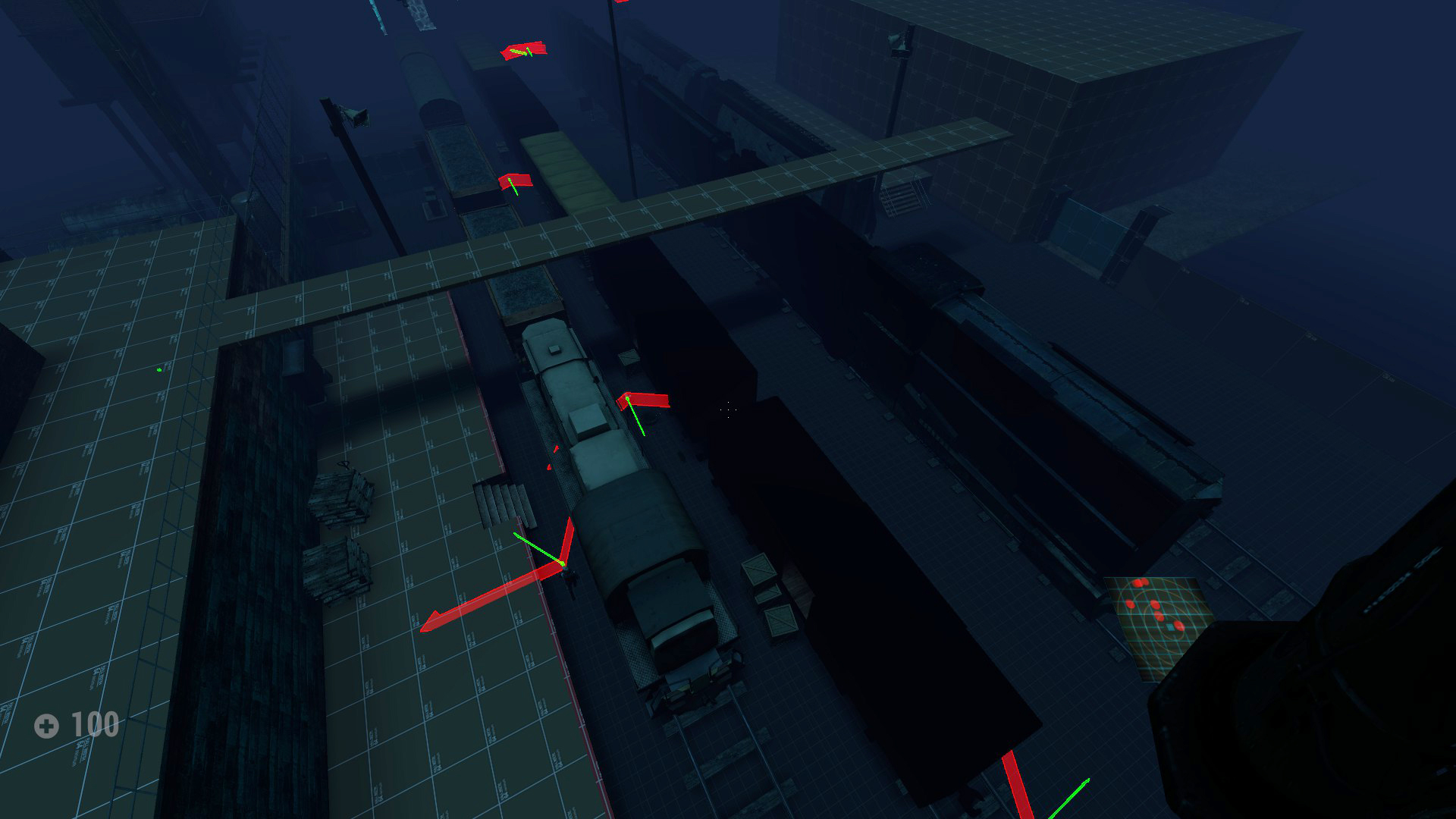 We are also working on adapting the AI for the stealth portion of the game. As You may already know, the standard enemy AI is highly irritating calibrated for creating stealth levels without using lots of scripts. As of now we've managed to "smoothen" the AI a bit and re-create it so that the player could use covers and dark spots on the map to stay hidden. In the future we will teach the AI to react to certain sounds and dead bodies and to raise the alarm if needed. You will be able to stealthily kill enemies and hide their bodies as well. (: 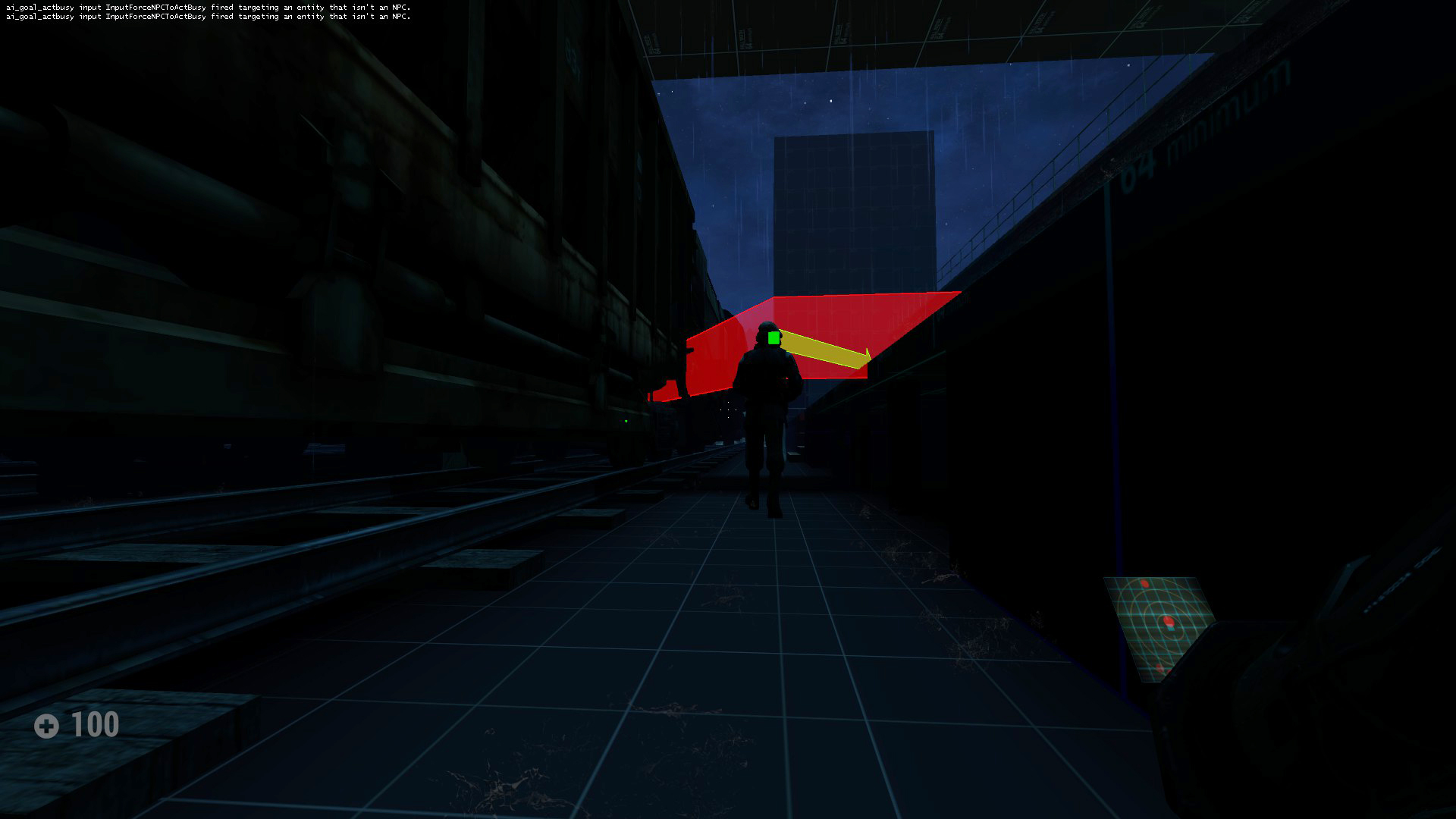 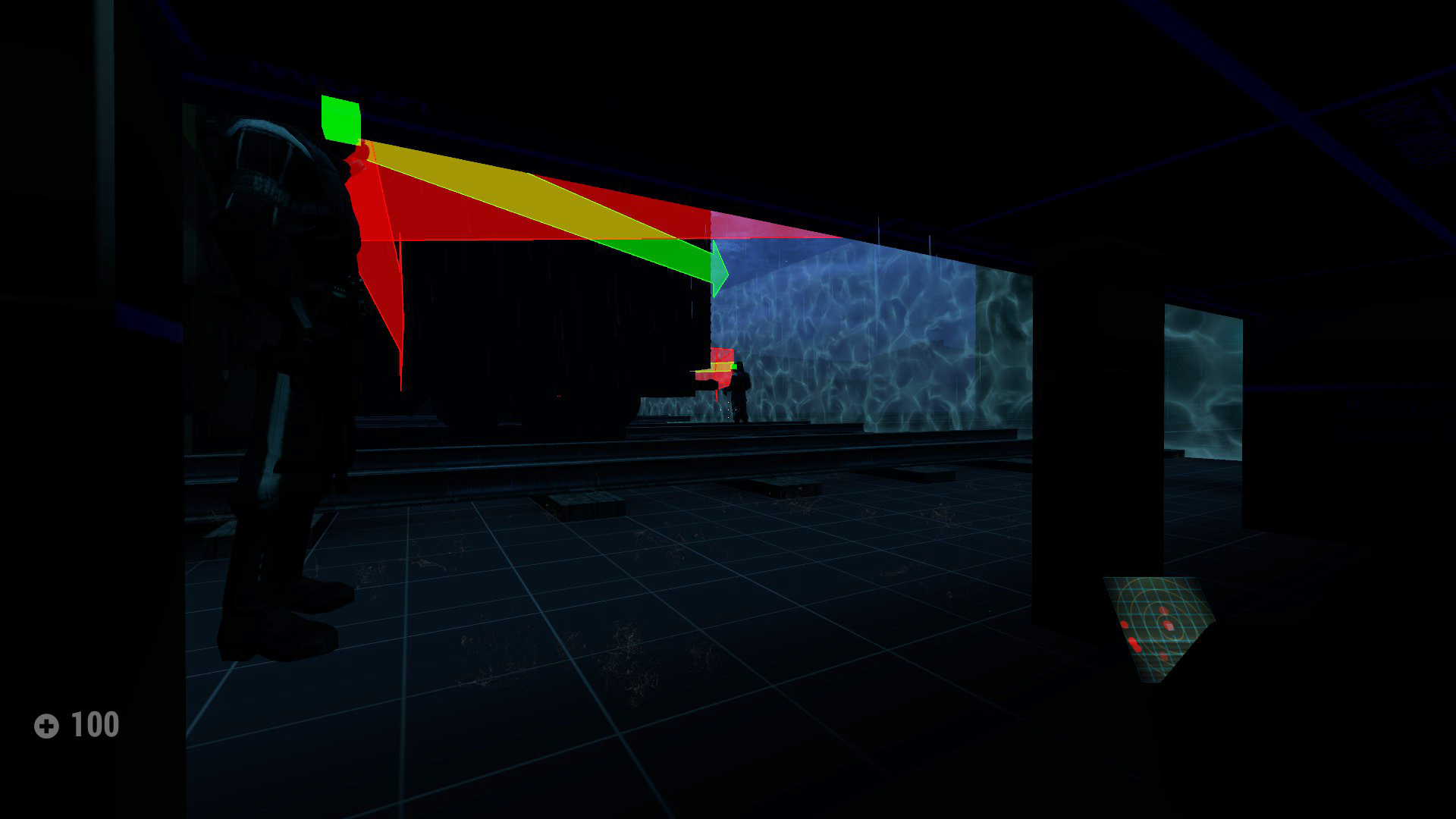 Speaking of stealth walkthroughs, one thing that comes to mind with such topic is boring linear pattern of the levels. We understand that. And during the levels with the ability of a stealth walkthrough, the players will be presented with a multitude of ways to execute.

Despite the stealth on Source being skeptically acclaimed, it is more than executable. The "Underhell" project has proven it already, and stealth system was one of the core features of the game. We believe that developing the stealth mechanics may greatly vary the game experience in the Half-Life universe.

That is all for today. Now You know about the first group of the main gameplay elements of Lost Story. In our next Dev.Log we will tell You about the additions to friendly NPC control elements as well as answer some of the popular questions that are being frequently asked.

Your frozen hedgehogs in shades from
Rock Path Collective

I think its better to have some destruction then none. Also, voted!