Talking about making the 4th world of So Many Me... It’s kinda traditional to me for a traditional platformer from the SNES day with light-heart theme like Kirby or Super Mario Bros. will have an environment in the sky with fluffy mellow cloud platform and those giant bean plant lurking around. Basically I think they’re all inspired from Jack and the Giant bean blah blah bed time tale from our childhood.

Last week, our team reworked on the world of the 4th chapter of So Many Me. Below is our lead artist's DevLog. Please feel free to leave your comment :)

It’s kinda traditional to me for a traditional platformer from the SNES day with light-heart theme like Kirby or Super Mario Bros. will have an environment in the sky with fluffy mellow cloud platform and those giant bean plant lurking around. Basically I think they’re all inspired from Jack and the Giant bean blah blah bed time tale from our childhood.

The fact is it’s very dream like for me back then as a child to walk on the white infinite plane of clouds and playing around without getting hurt when I fell on the ground.

Well that wrap up what’s happen in my head and as well as the other in the team for the Sky-Factory environment. Now for the story element. Sky-Factory zone is originally the peaceful skyscape until the naughty Cloud-9 folks set their plants and factory there to scoop up the resource from clouds (?) around the world of Xio. And left behind only the polluted smokes. So, player can see both untamed whitey cloudscape as well as the harden, industrialized zone full of machine that blow out steam of polluted black smoke. 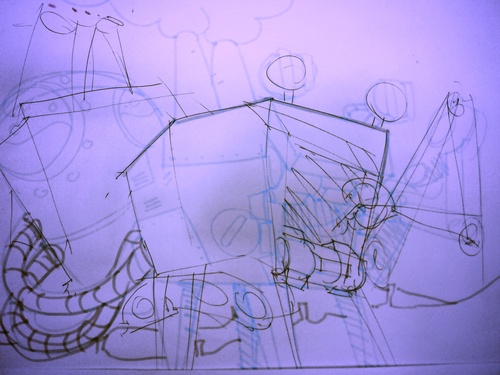 ^ The first rough ugly sketch for exploring the idea of factory. 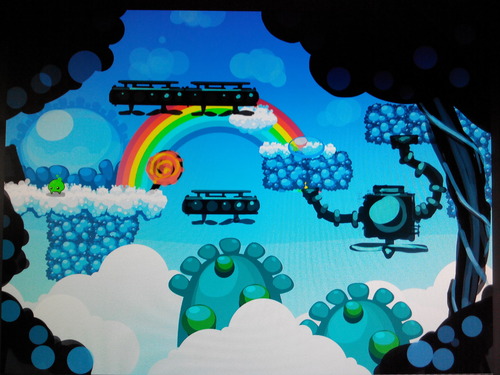 One problem we faced for the in-game image was a gap between the concept image and final rendition in the game engine. Which is for me kinda common to happen. Concept art can be made very freely with little to do with game mechanics or engine’s limitation. It’s result in a miss-match of looks and feels of the in game graphic. 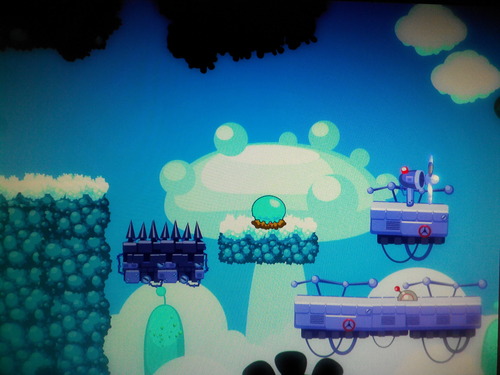 ^ Screenshot from the engine 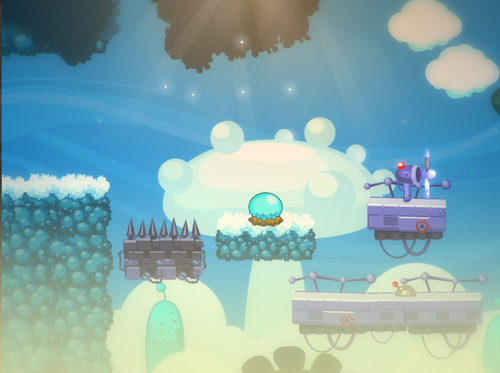 ^ Painted over version ready to send back to our programmer! Yay

Another cause of this problem is myself, as a concept artist have and use many tricks on the concept painting. In order to make them looks good in the limited time given. So I could sell the idea to the team! hah! Nifty perk I had.(as well as many other artists out there) the blobs of paint could hide so many detail behind it, tricks the viewer’s eyes the lack of the detail. Not to mention many composition tricks I had thrown in to the concept arts.

To solve those miss-matching concept and visual design flaws. We work it backward from the screen shot from the game engine. After discussions and decided what to add to enhance visual element in the engine. My works is to paint over the screen shot, suggesting more visual elements such as a stylized atmospheric curve in background, lense flare and lightshaft coming down from the sky above, etc.

We tended to rely less on advance shader, post-processing techniques as well since those beautiful image tricks won’t able to carry-on to mobile platforms. And right now Sittipon the lead programmer of SMM project is tackle with the z-buffer thing that appear to be very problematic and hurt a lot of performance on mobile version. That may result in the whole new tile system for every level! ow, god bless him.

Well, before I turn this creative-kind of devlog into a rants. I better go back to my cave and continue crunching more beautiful .psd // Somjade signing off.