Unending Galaxy devlog about the upcoming 1.1 release, including the colony manager, the improved user interface and much more. 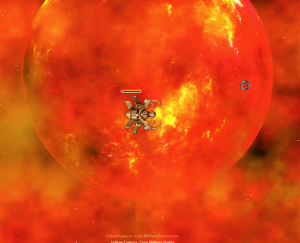 Here is a resume of the work that has been accomplished this summer toward the upcoming 1.1. But first of all, I would like to thank all the fans who have voted for us on Steam Greenlight, because Unending Galaxy has just been accepted on Steam ! It’s going to take a few weeks to do all the paperwork and effectively putting the game in store. I will likely align that with the 1.1 release which should be out late October.

Depending on your faction you’ll get access to specific colonies that you’ll be able to build on the planets you conquer. Some colonies can only be built on specific planet types. Each colony type offer different bonuses. And until now everything was happening under the hood, colonies were assigned at semi random each time a planet changed hand. Well, that will end with the upcoming 1.1 release with the addition of the Colony Manager.

Let’s give a look at our new menus. 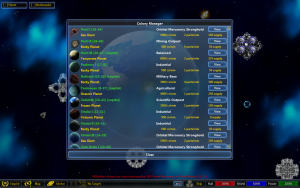 This is the new Colony Manager. The actual look is not final, and it will probably get a few filters, but that’s close enough to the final product. This is a listing of all the sectors in which a colony is or can be built in your territory. It gives the general statistics about each sector (income, supply, parts production). Double clicking any item in the list will bring you to the following menu: 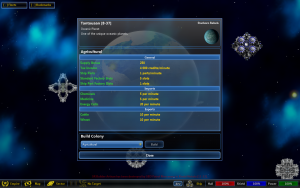 An agricultural colony under your control

This is the colony setup menu (it can also be accessed from the sector info panel). Here you can see all the statistics about the selected colony, taking into account racial and planetary modifiers, and what it can import and export. If the colony is one of yours, there’s a drop down menu at the bottom which allow you to build another colony type as shown in the screenshots below: 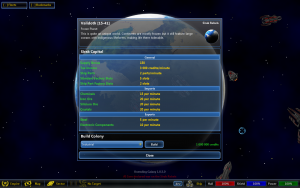 you can preview a colony before building it 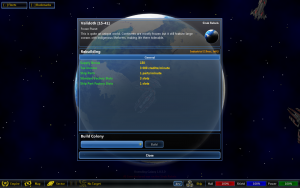 While the colony is being rebuilt, it won’t benefit your empire much

This is the gist of the colony management, as you can see it’s pretty straightforward. Of course, don’t take the values in those screenshots too seriously, they will likely be tweaked during the development. Right now, this is a “player only” change, but AI factions will start using this system as well instead of building colonies for free. Also, If your faction cannot support a colony in 1.1, it will be flagged as a rebel colony of sorts and will not provide any resources until you build something else there. Of course, construction will take money and time, and during the process, the colony won’t produce anything either.

Plenty of small changes to the game’s menus. I added some colors to the ship scanner, and right clicking a weapon or shield in that menu will show its stats like in all the other menus. Double clicking a faction in the diplomatic treaty menu will switch to the faction you’ve clicked on. Oh, and double tapping a fleet shortcut key will center the camera on said fleet, like in any good RTS :) 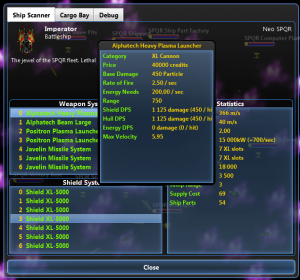 The various “settings” menus have been unified into one single window with a few tabs as shown in the screenshots below. As you can see, an option to save the game at regular interval has been added. It’s also possible to set how detailed ship and bullet rotations are, which has a big influence on the game’s initial loading speed and memory consumption. More options and settings will likely be added either in this version or further down the road. 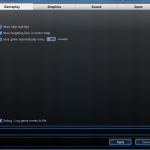 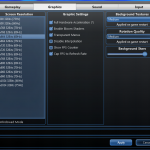 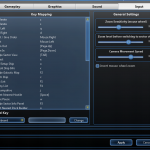 Last but not least, ships running AI modules can show more useful orders than the default ‘moving to’, ‘standby’, and so on in the relevant menus (asset list for instance). For instance, free traders will tell you when they can’t find a profitable deal in their designated area, ships getting an escort will say so, etc.

First there’s a semi-major change in how shields are handled. Until now each shield slots was handled individually. You had to empty the first slot to damage the second, and so on. Only the “damaged” shields contributed to recharge rate/speed and energy consumption. And that made shields a bit over complicated from a balancing standpoint. To simplify things a bit, shield slots are merged into “one big shield” with stats equal to the sum of all the slots. Which mean that shield energy consumption and recharge rate is consistent no matter the amount of shield damage you have. It should also consume less CPU power than before, but it’s marginal. Shields weren’t exactly performance killing components anyway.

And of course, I rebalanced shield data accordingly. Energy management should be something to take into account when customizing your ships now. 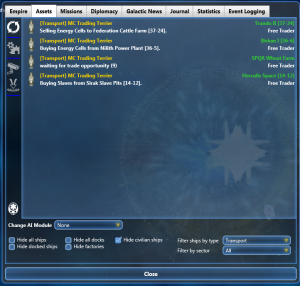 I make it so free traders will sell cargo at a loss if they haven’t been able to find a better deal for a long time. They will also send a message to you if for some reason they can’t sell a product at all anymore. It may be added to there setup menu. Ships with no weapon systems (or no weapon equipped) will continue course when under attack.

I also added something that has been requested quite a few times: taking control of a ship will no longer cancel current orders and automation modules. Instead they get paused, and will be resumed the moment you exit the ship.

More work has been done toward the free camera mode detailed a few devlogs ago. It’s mostly finished but I still need to review a few commands/shortcuts to make them consistent across all view modes (which isn’t trivial).

Regarding bug fixes. Too many sound effects being played at the same time won’t corrupt the sound output anymore. The error message you got in the trade menu if you click multiple times quickly on the buy/sell buttons is no more. A bug preventing the shield editor from saving its data correctly has been fixed as well. It’s no longer possible to fire missiles at your own ships by accident. It’s no longer possible to order a ship to protect/follow/attack itself, which incidentally fixes a possible bug/crash when you do that. I also fixed a bug that was causing weapons/shields to disappear if you try to uninstall them when the ship’s cargo hold is full. There are still a few bugs left, but the list is shrinking quickly.