Post news RSS Devlog #95: A Man Who Talks To His Gun

New devlog entry for Shardpunk. The title is not a name of a movie title - that's a rough description of another playable character in Shardpunk.

Howdy! I did mention two weeks ago that I was planning to work on another revolver-wielding character. And there he is! Please meet Silas:

On the contrary to Mike - the other revolver-wielding character who's kind of of a "leader" type - Silas is more of a loner.

Well, calling him a "loner" might not be the most accurate thing. Here's his starting trait: 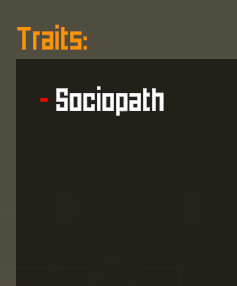 This makes the guy immune to external stress-altering factors; other characters cannot cheer him up.

(Frankly, I am a little worried I will be getting mentally closer to Silas's personality as the game development progresses. Hopefully not!)

Now, here's the thing: our crazy friend can spend stress to enter a more aggressive mode, making him slightly overpowered. In the upgraded state, the "All in" action grants significant bonuses to aim and critical shots AND grants an extra action point. This state lasts for a few turns. The downside is that it generates stress and reduces your defense. Still, it's a good way to kill some more enemies.

Silas calms himself down by telling jokes that aren't funny to anyone else (which increases the stress levels of other party members). He can also spend action points in the shelter on... whispering sweet words to his revolver - which obviously increases the max damage output!

I had the most fun designing the skills for this character. It was the first time I decided to use Stress as a resource.

Also, Kurt (the talented pixel artist I work with) came up with a great way of presenting Silas as that gunslinger guy, who is keeping his weapon holstered. This might actually be a very good decision for the future if I decide to visualize different weapon types on characters - as Silas's weapon is not being displayed in most of his animation frames.

Anyway, that's it for this entry. Thanks for reading and you'll hear from me, as usual, in two weeks!