Post news RSS Devlog #85: What if there's no Fusion Core?

December has arrived! It means that after one month of full-time (well, kind of, due to all the crazy stuff that hit in November) game development I am back in my day job.

Does it mean that my development speed will decrease again? Yes.

However, the work I did in November included creating a development plan and a more detailed game description. I also have the whole backlog for graphical assets ready. All of this will help me out with my search for a publisher. Man, I would love to get back to full-time game development.

Anyway, I want to write more about one gameplay feature that I had a problem with: using Fusion Cores.

Basically, a Fusion Core is an item that you can find during your journeys. Its main purpose was to unlock entrances to shelters which were present at the end of every level.

You spend a Fusion Core, and the shelter becomes active.

So Fusion Cores were somewhat similar to fuel in FTL or in Pathway.

The main unanswered question was: what should happen if the player does not have a Fusion Core to unlock the shelter?

There were several ways to approach this. First, the most interesting one: getting rid of Fusion Cores.
I mean, that would surely solve the issue! The player would be able to enter every shelter as they will.

Another approach - and one that would not be about ripping a feature out - would be to introduce some kind of a penalty for the player. In Pathway, if the player runs out of fuel, they can decide to continue their travel on foot. It does damages the health of your characters though.

Now, this wouldn't work in Shardpunk, as the characters already travel on foot. And the whole thing is different, as I need these Fusion Cores to unlock the exit, not to move around the map.

I decided to make shelters optional, so I've added an alternate way to end a level. Each combat level will have a "regular" escape route that does not require unlocking any doors; the characters simply leave the zone and the player proceeds to select the next travel destination. You don't enter a shelter, so the punishment is that you don't get to heal up or recover stress.

Now, this introduced new problems (or should I say "challenges"). After each combat - even if you don't reach a shelter - the characters are getting more hungry. However, what stops them from eating food rations even if they are not inside a shelter? Surely they are able to find a moment - even when they're running away from rats - to grab a bite of something, right? So I've made sure that a feeding phase is present after every combat, even if no shelter has been reached.

What is more, a character can eat more than one food ration at a time, to better replenish their hunger. 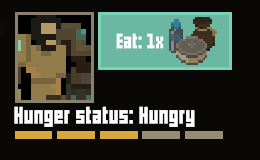 Also, the hunger meter is being displayed as a bar now. You lose one hunger point after each combat. Previously it had three states (not hungry - hungry - starving).

What is more, some characters might acquire a quirk that requires them to consume more food.

Lastly, to make this stuff more real, I made sure that each day is divided into parts. So instead of a whole day passing, only a part of it does. 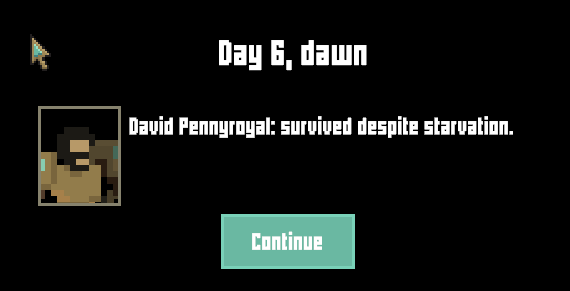 That's it for this entry. Take care, and thanks for reading!