New devlog entry for Shardpunk. Let's talk about how I progressed with the character experience-related features.

Welcome to the next entry of the bi-weekly devlog of Shardpunk! Despite the start of a new school year (we have two children - aged 8 and 10) I managed to spend some time on the game, pushing it a little bit closer to the next release.

The next demo will be named "Map + XP", although gaining experience and map travel won't be the only new things present in the game.

Anyway, I spent some time working on the experience gain mechanism. Here's what I got so far:

Characters gain experience points after each combat mission. Each survivor receives a number of XP just for surviving. Extra points can be received by killing more enemies or healing yourself/others during combat. 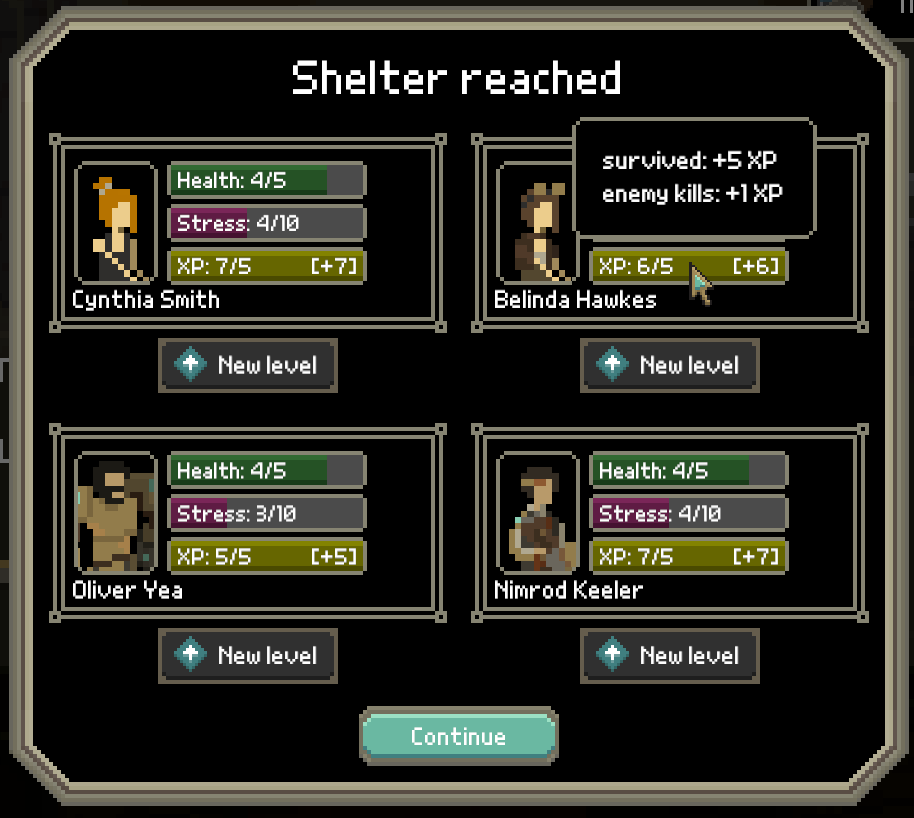 When reaching a new level, characters gain a Skill Point that can be used to unlock skills.

I did a major rework of the skills/traits system, and separated ones from the others. I've ended up with:

Class-specific unlockable skills (example: "sword slash" skill which is only available for rogues). These skills have level requirements, and will always appear in the same place in the skills tree.

Universal unlockable skills: they also have level requirements, but can appear for every character. Example: "hard to hit", which makes it more difficult to become hit with reaction fire.

It is possible for a skill to be universal, but also be present in the "fixed" skill tree - of course for different classes, as it would not make much sense for a skill to appear twice for the same character.

Next, we have traits. These can be either positive or negative, cannot be unlocked (they're pre-rolled for a character), and some of them are only obtainable when the stress level is too high. 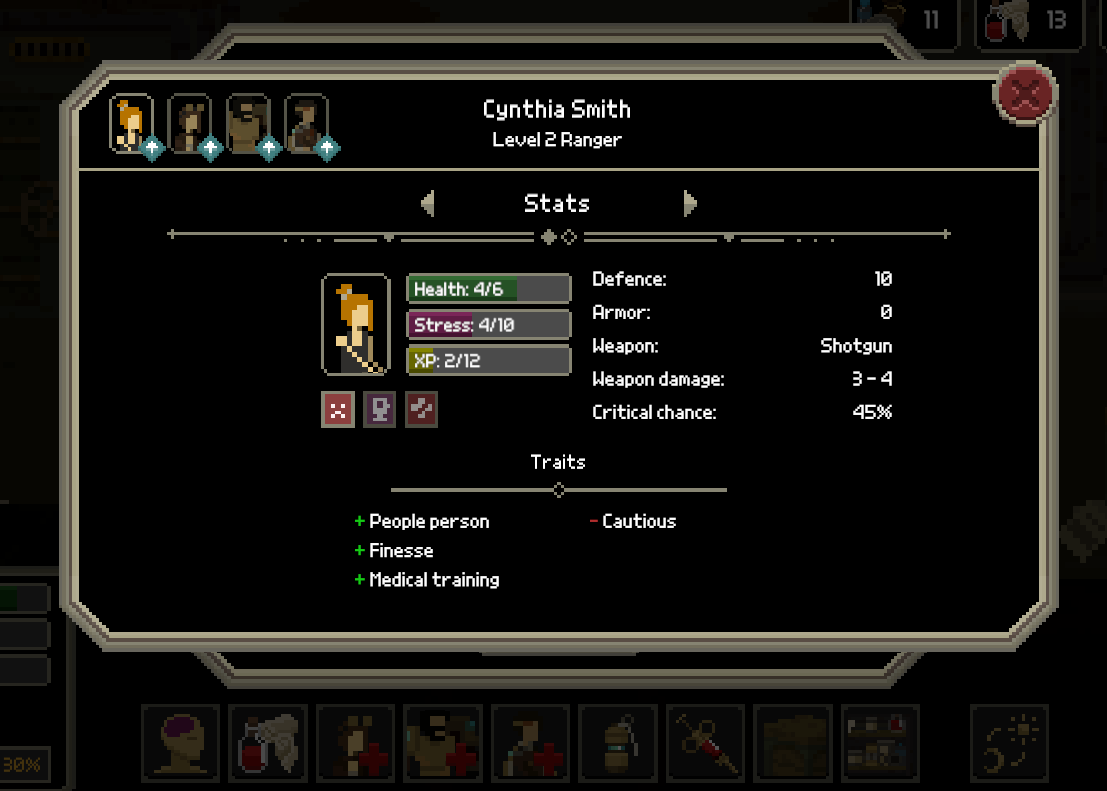 So for the XP, I have the core mechanism in place. Obviously, the skills will change as new gameplay mechanics will be introduced. Also, right now the UI only shows stuff up to the 3rd level (level 4 is a placeholder). Depending on the length of the game, the level cap will vary.

Besides the XP stuff, I spent some time tweaking the UI in general, making sure it is more readable. Here's how the combat UI looks like: 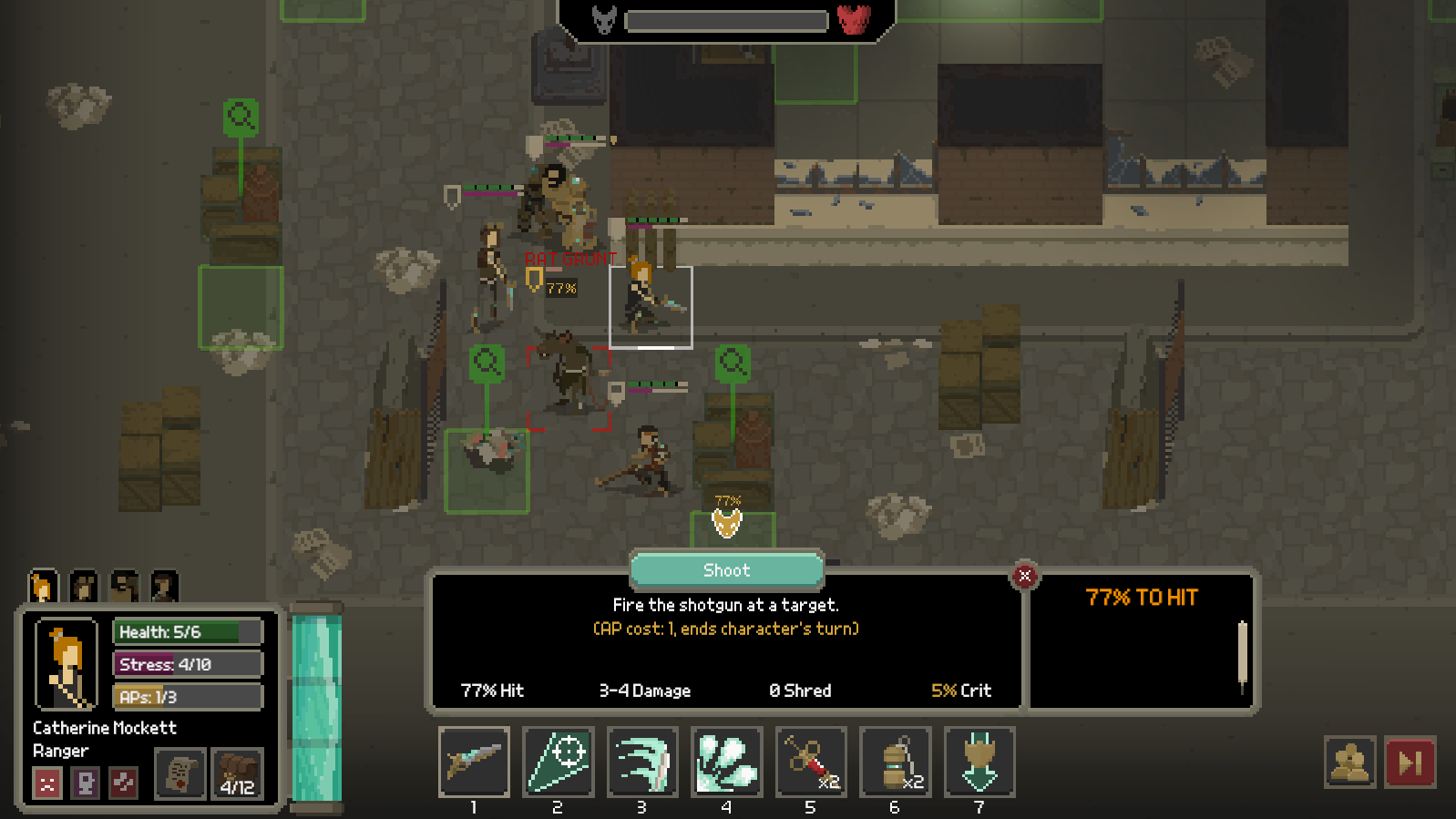 As you can see I moved some stuff around, made the current character's stats more explicit, and moved the weapon heat indicator closer. I've also un-cluttered the top parts of the screen (you can still toggle objectives and common inventory display).

The side details are now only about displaying the effective % to hit.

As for my future plans, I want to introduce some quality-of-life changes to the game (and change few systems, based on player feedback). Then I will be off to the map travel thing.