I feel like it's time to discuss some post-demo feedback here. It's been a couple of weeks after the demo release, and as the shelter mechanics are not in a showable state yet let's focus on some of the remarks/ideas the players had.

Still, if you haven't played the latest demo yet you can grab it here.

Every character has a max carry capacity, and when it is exceeded a character cannot move further. 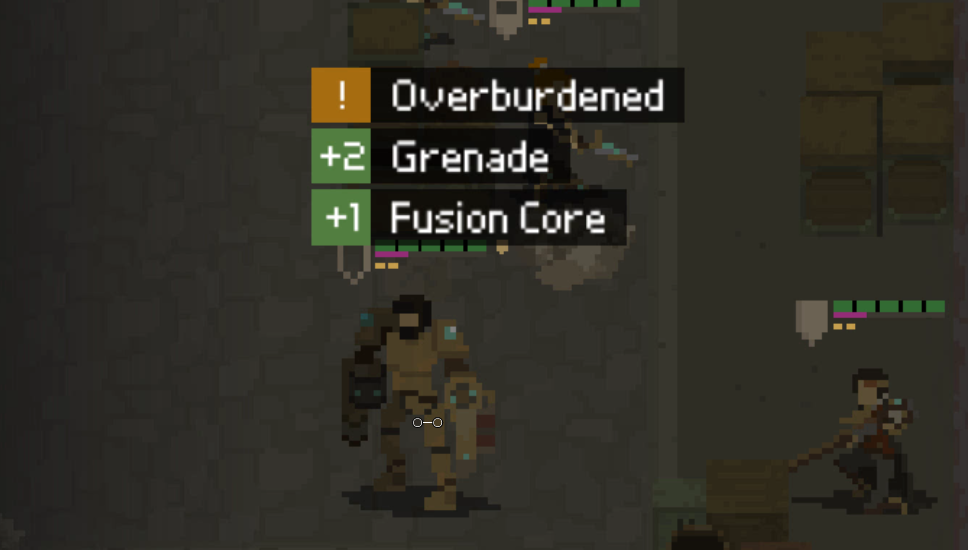 Few people have noted that this could become annoying. The player needs to collect stuff. If someone carries too much, they need to a) drop the item, b) move the character to the side, c) move another character on top of the item and pick it up.

One of the ways to make it less of a chore is to make sure that a character that carries too much can still move. They might have their movement range reduced, or some other penalties applied instead.

This won't solve the issue with the need to juggle inventory items between characters though. One solution to this problem would be to introduce a shared inventory - so each time when you find a thing it gets added to a common pool.

This approach would mean that individual carry capacity would become obsolete. There could still be a max capacity, based on the number of alive characters. However, this generates new problems:

b) As grenades and stimpaks are now also treated as inventory items it would be looking silly that each character has access to every utility item.

I believe I will stick to having separate inventories. Still, I will have to allow easier passing of items between characters. Maybe I will let characters to throw inventory items around in a small range - I'll see how it works.

Shotguns being too good at long distance

Yeah, shotguns are now basically behaving too similar to "regular" long-range weapons. I will experiment with drastically reducing their range and making sure they have an AOE effect instead. Killing rats - especially more than one at a time - is a big fun generator so I need to add more of it.

Seems that the combat suit might be *slightly* too strong. The "boost" skill resets the weapon heat, and the boosted shots don't generate heat themselves. This resulted in almost no need to perform a weapon reload for the soldier.

I don't recall why I decided to make the boosted shots ignore weapon heat generation - I will change that.

When a character's HP fall to zero, they're dead. All of their inventory is dropped on the floor and that's it. However, it might be worth to give the player a last chance to save a character - probably by introducing a "bleeding out" state (similar to the one in XCOM or Mutant Year Zero) during which a character cannot perform any actions, but can be "revived" using a stimpak by another character.

I am definitely putting this one in my backlog - although it may not make it way to the nearest demo.

Players can see the cover levels of each map tile. However, when a thicker wall is present, the bottom shield gets covered by the wall texture.

With a narrow wall, the player can see the bottom shield on the movement target.

Thicker wall: half of the movement target is hidden behind it.

Now, this does not seem like a big issue to fix (simply increase the amount of wall stuff that becomes opaque) - however, due to the way I am drawing walls and their top parts it will require a full rework of the wall display system. With the limited time I am able to put in game development this will be a long-lasting thing. Still, I will have to do it someday.

OK, I will stop here for now. I still have a long list of game-related things I need to think about and I will leave them for future blog entries.

As for the next demo progress update: I do have the basic shelter management code working, although the gameplay loop is not complete. I am mostly busy with making the two parts (combat and shelter part) working together in an enjoyable way.

Thanks for reading, and have a great Easter!