In this update: Escudo's development, the process of the sprites, and updates to character specific coding.

the process of making the sprites,

and updates to character specific coding. 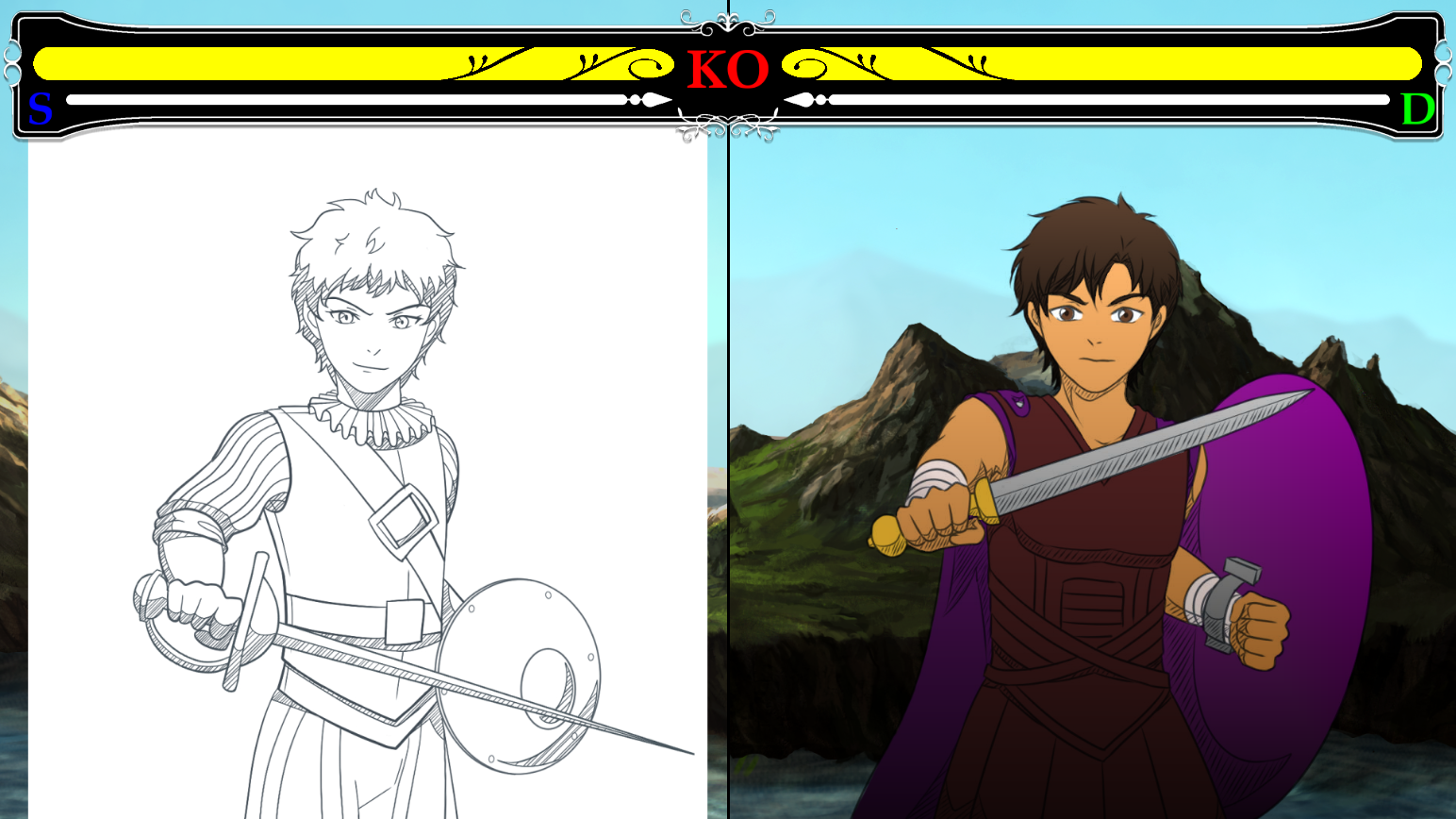 Escudo's development is now well underway with some of the sprites already received and implemented into the game. Though production is still estimated to take weeks, I think her set should be ready in time for the expected month of July when the demo arrives. For this update, I'd like to give a brief explanation on how the process of making a sprite goes through, at least from my perspective (my artist is overseas). 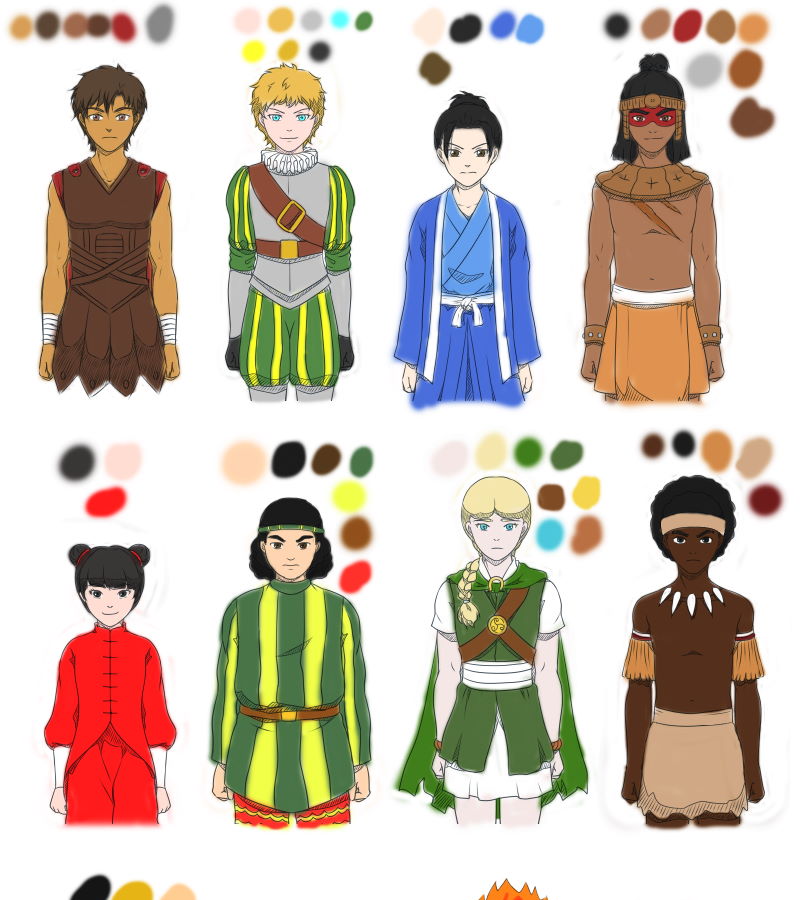 Before the in-game sprites even begin to be drawn, we started with the character select sprite. This was part of a large batch that included the rest of the cast. When the character select sprite was approved, I provided a document with all information about the current character that is to be created at the time. This document includes all the poses, their functions, and any notes the artist needs to know about. After the document is received by the artist, they then provided a schedule of which sprites were going to be made in the form of batches.

Each batch is a set of sprites based on a specific action the character will perform such as guarding, charging, striking, dodging, etc. 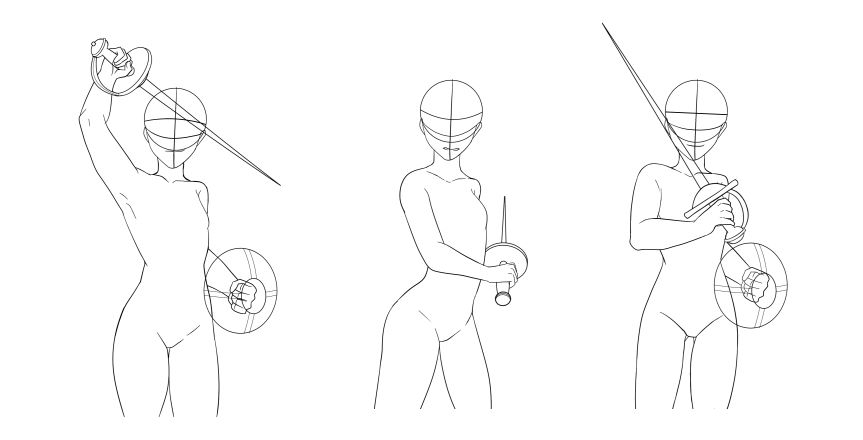 Before they begin drawing each sprite, I request a rough pose from each in a batch to test out the animations. That way there are less problems when the finalize sprite needs altering in terms of posing.

Some sprites turn out great the first time but more often than not the artist requires further instructions as there can sometimes be inconsistencies. Thankfully they are skilled enough to fix these problems when needed. These are subtle and you probably won't notice them at first but as you keep playing the game and start paying attention to the sprite details, especially the guarding/targeting sprites as those are the sprites you will most likely be seeing the most, these inconsistencies will be apparent, so I'm very happy that the artist could fix them aptly. 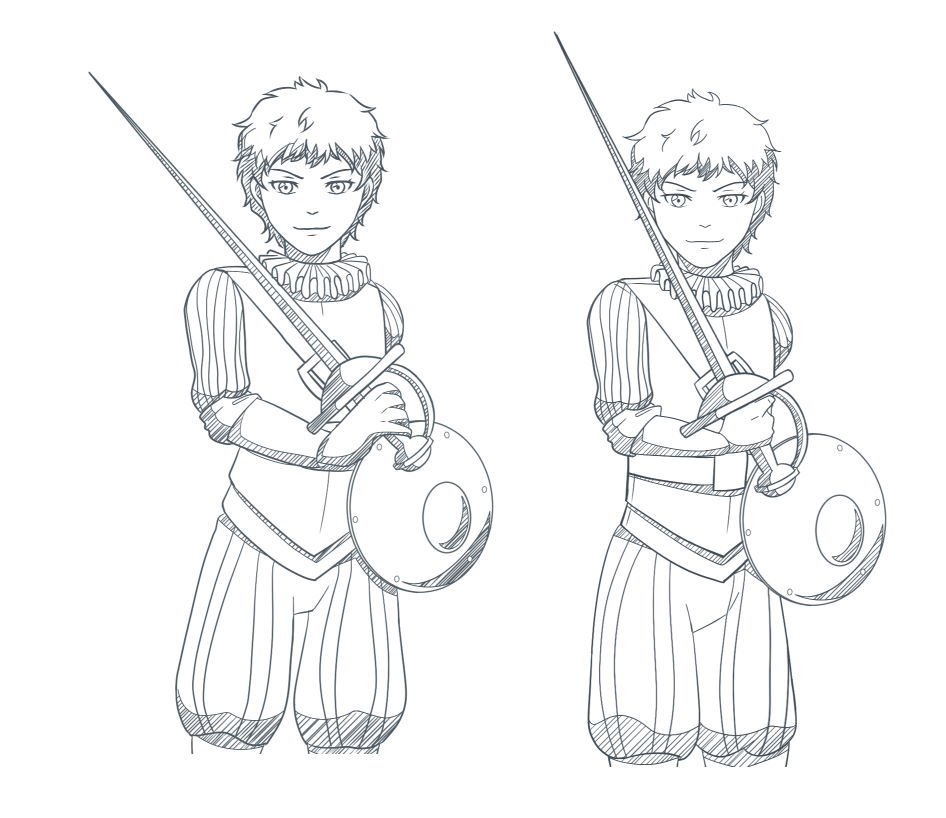 Left was the first submission that was requested to be altered, while the right sprite is the finalized and approved version.

As of this writing, only three batches have been created so throughout these weeks, Escudo will be seen in this WIP state.

Here is a small sample of animations of what has been done so far.

While our artist are working on the art, I am in charge of getting the actual game up and running come July. Right now only small things are being done, mainly in the menu department.

One of the biggest inclusions that you won't be able to see is that the code has been set up to know which player has which character. Before, since I only had Enro, the code was built around him, but now that Escudo is coming, I had to update it so that certain features would be applied to not just her but future characters as they are implemented. 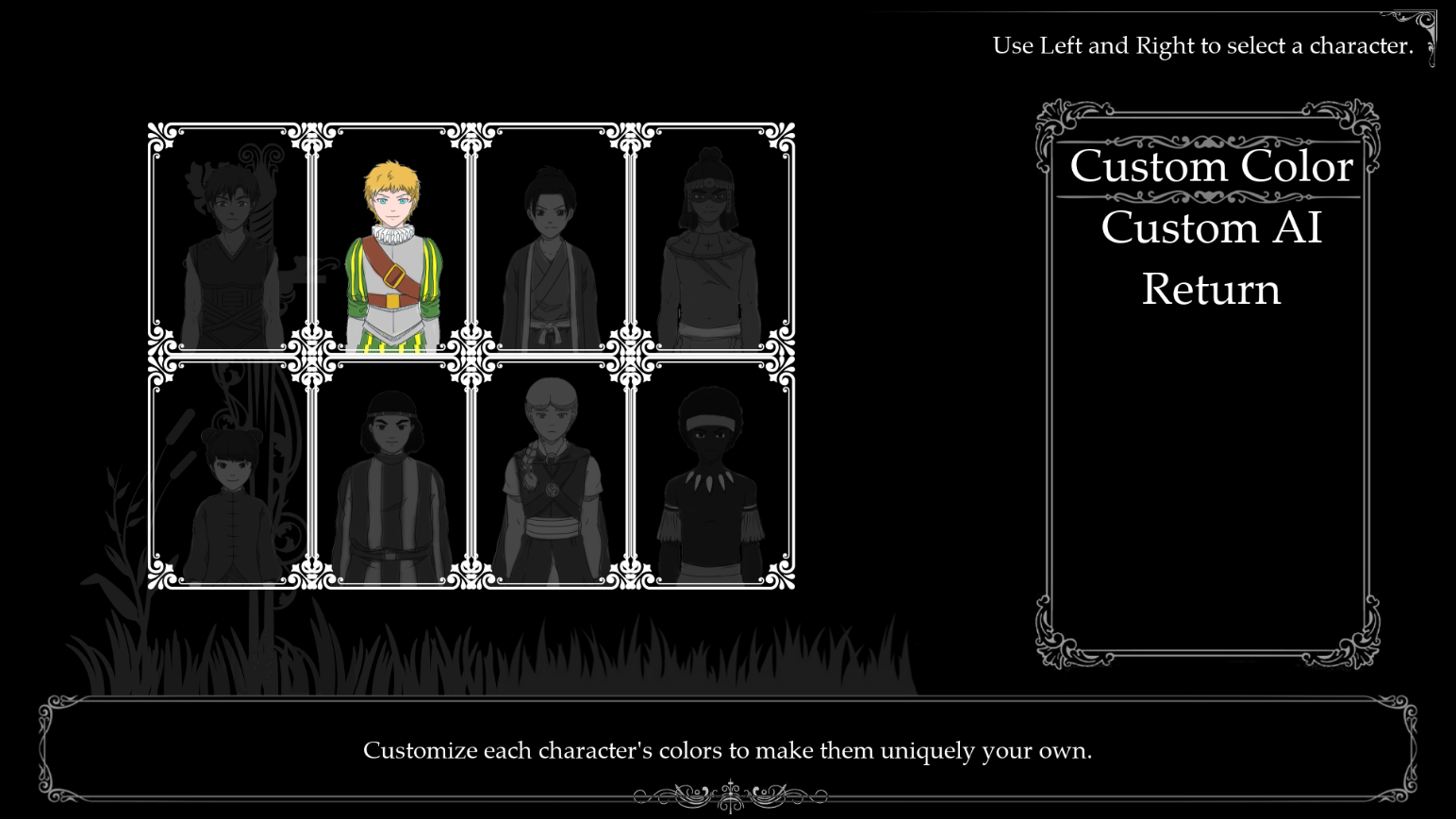 This currently includes the main gameplay modes (Arcade and Versus mode) and the color editor since the each palette is linked to a specific character. Originally, the game gave you the list of every single color palette when it came time to select one and this was fine because only Enro was available at the time. Now the game needs to distinguish which palette belonged to which character since the player will definitely not want to scroll through a list of every palette made to reach the one they want. The list of palettes now detects which one belongs to whom and only shows the ones made for each character. 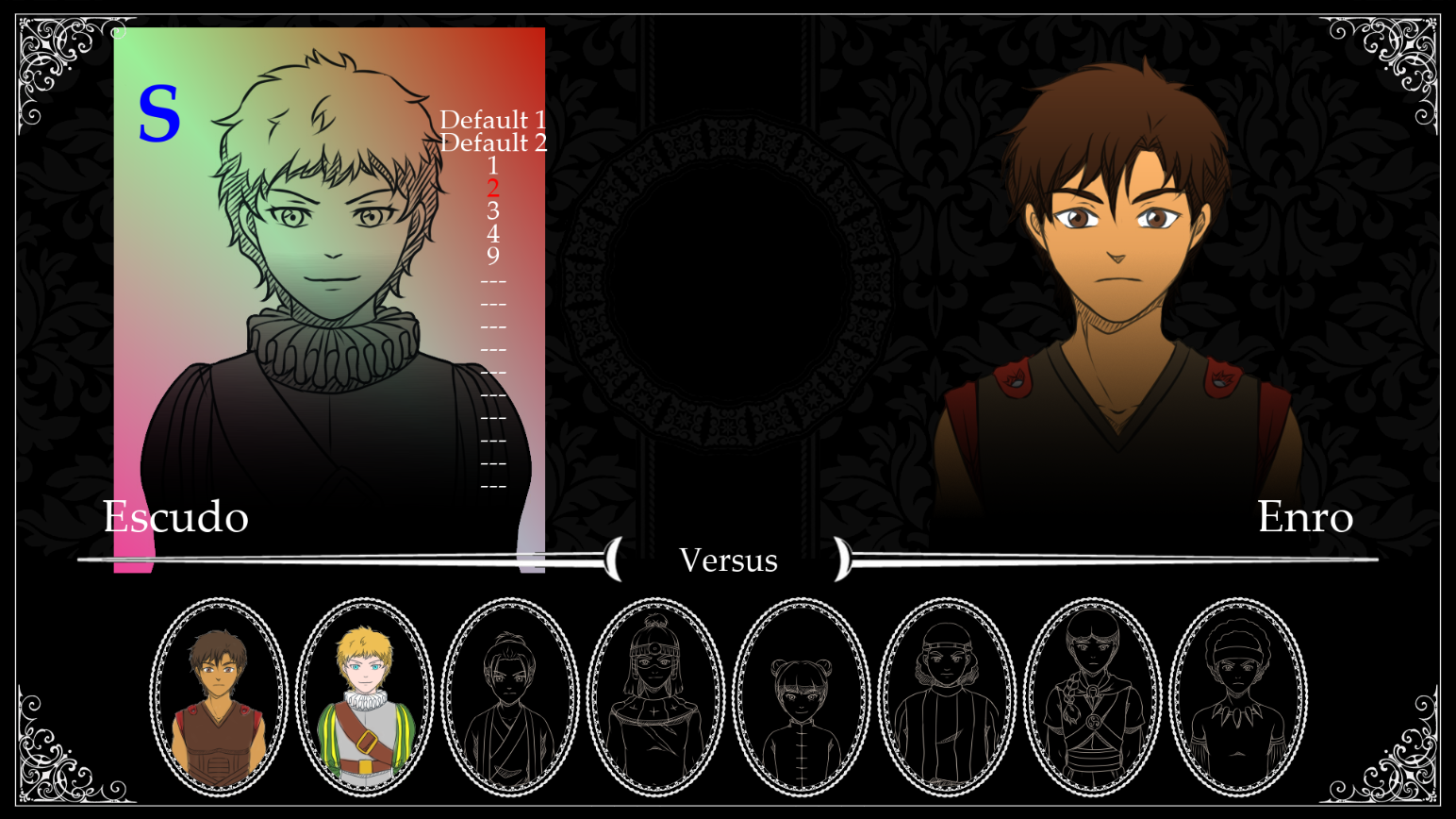 Sharing is caring but not when it comes to color palettes.

And that's pretty much it for this update. I'm also starting a new month long project so there may not be another update in the next 2 weeks. Things are going slow since I am waiting for Escudo's sprites but by June, I should have the majority of them that I can continue building the demo.

Why thank you. Props goes to the artist, Art of Imagi Studios. They are great to work with.