What makes Holy Hell special? In this article we're covering why we consider Holy Hell a distinctive game within its genre.

Hello and welcome back once again! Today we are going to talk about the main reasons why we consider Holy Hell a game with so much potential and how it is distinctive from other games of the adventure genre, as well as some of its best features.

We would never say that our game is completely apart from other adventure games because we would be lying. It has many aspects that are common in every game of this genre and it also has aspects that are not so common but can still be found in other games. Regardless, we'll list below the ones that we believe are most relevant and some even unique:

Let's now check why we believe those particular aspects stand-out:

The most unique feature in our game is the fighting system, which combines basic slash fighting, with special combos and a wide range of abilities. They all work together to create many different scenarios and fights. But the real reason why it is such a distinct fighting system is the Impaling Dash ability, which is basically a Dash that impales enemies and objects on the sword. Impaled enemies (or objects) then can be used to empower our attacks, by directly affecting them and altering their effects.

Below you can see a clip of a fighting scenario, notice that in this clip the player only had the Impaling Dash ability unlocked (which is the first ability awarded to the player), and the fighting already feels great:

Gameplay of an early prototype version.

This ability also enables a variation of interactions with the world itself. In the clip below you can see how it can be used to get through a locked passage:

Holy Hell's theme revolves around the existence of a God that, instead of pure and benevolent, is evil.
This theme isn't explored much in videogames and we think it is a great philosophical subject to dive into.

The way we present our game in this theme starts with the backstory, which gives our character its purpose in the game: Kill God.

To keep it short, since we've talked about the plot more in detail in a previous article, which you can find here, we'll explain the story in a few words:

The main character, also known as Nomed, has lived his entire life filled with misfortune. One very sunny day, he was strolling on top of a cliff and out of nowhere was struck by lighting, immediately falling off the cliff and landing on a baby, which obviously died with him. He then wakes up in Hell, which is his last straw. Completely enraged, he sets his mind to kill God, as only he can be the one to blame for all the unluck Nomed as lived through.

So, is it really God's fault? Are we not seeing the full picture? And if it is, what could it mean to have such a powerful entity ruling everything and everyone? This is quite an old philosophical theme of discussion which will be explored in our game.

Directly related to the narrative, our game is set in Heaven. This grants us immense creative freedom, which by other words means we can assemble a world with completely abstract structures, entities, flora and fauna. 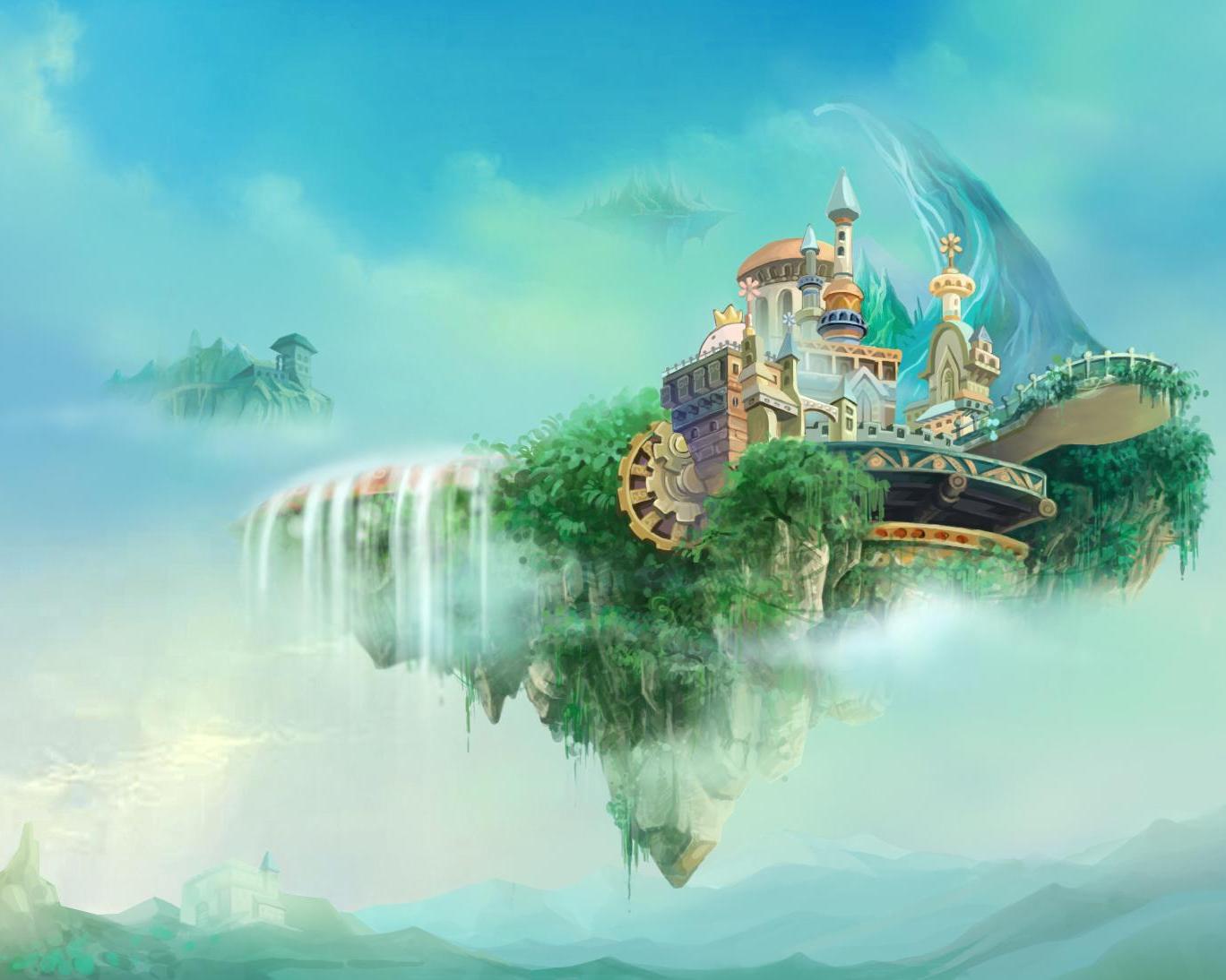 Image of a floating island, used as reference to a possible abstract representation of our Heaven (this image does not belong to us).

We chose to represent Heaven as a giant cluster of floating islands, divided in 7 areas, where the player will find 7 bosses. The bosses are none other than the 7 (Christian) Virtues, which turn to the their respective Sin when defeated.

The enemies are angelic beings (much smaller than the bosses) which try to bless us and ultimately convert us to one of them - just like lovely Jehovah's Witnesses. 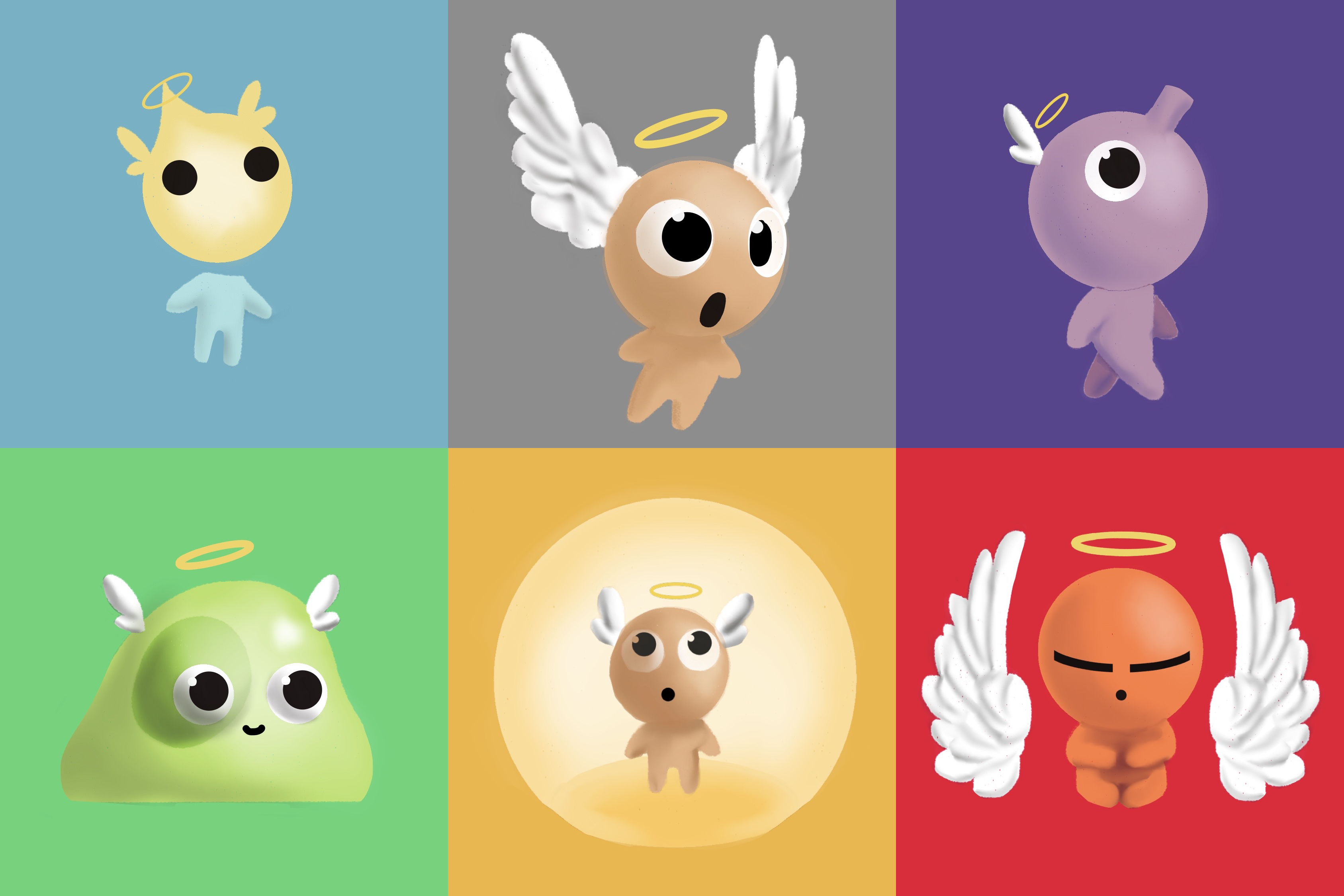 Still in relation to the previous points, due to the abstract nature of the Holy Hell's theme/setting, the visuals end up being pretty distinctive from other games and real life in general. We achieve this uniqueness mainly with the colors we use in our game: golden flora, lots of light grey rocks and rocky structures, lots of white clouds and light blues in water ponds, waterfalls and the sky itself. 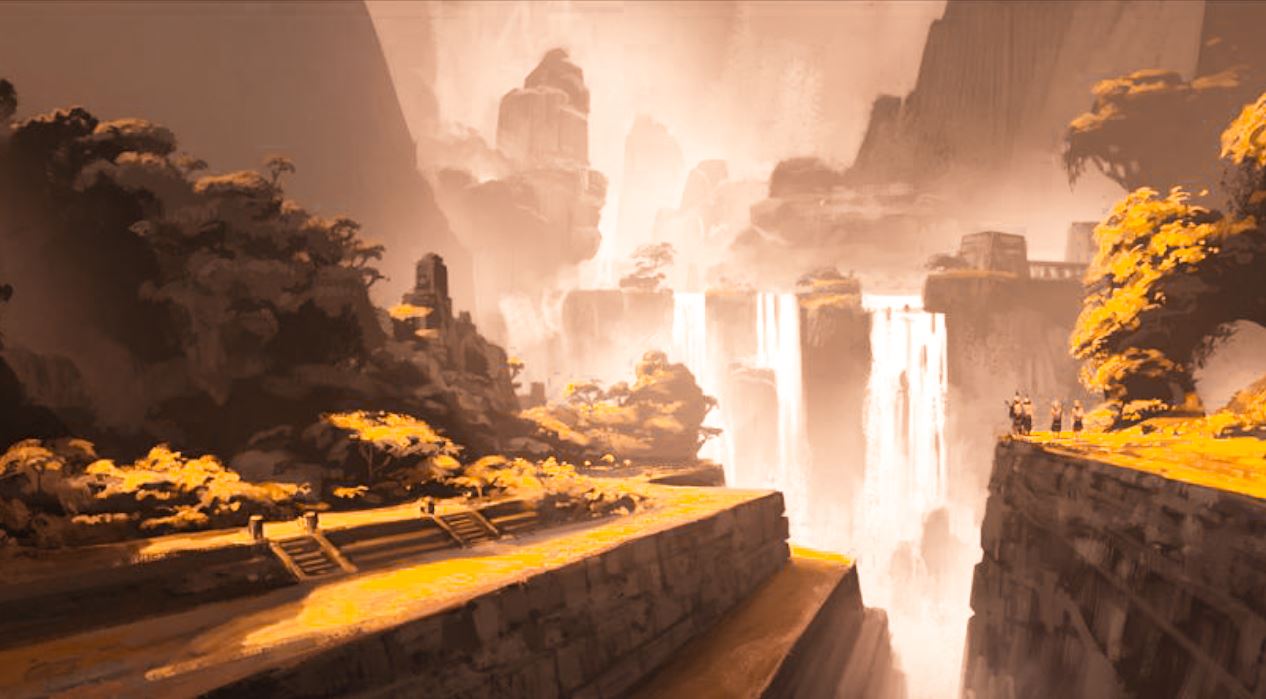 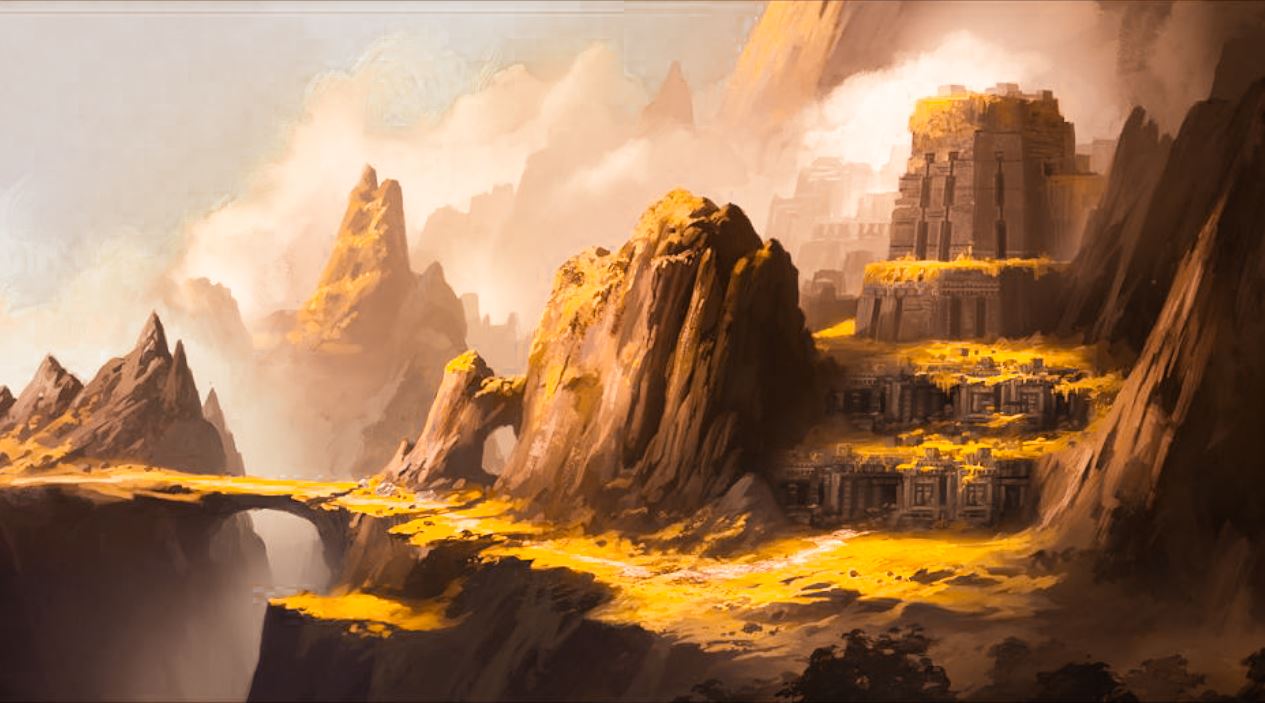 Reference to the golden-ish flora (these images do not belong to us). 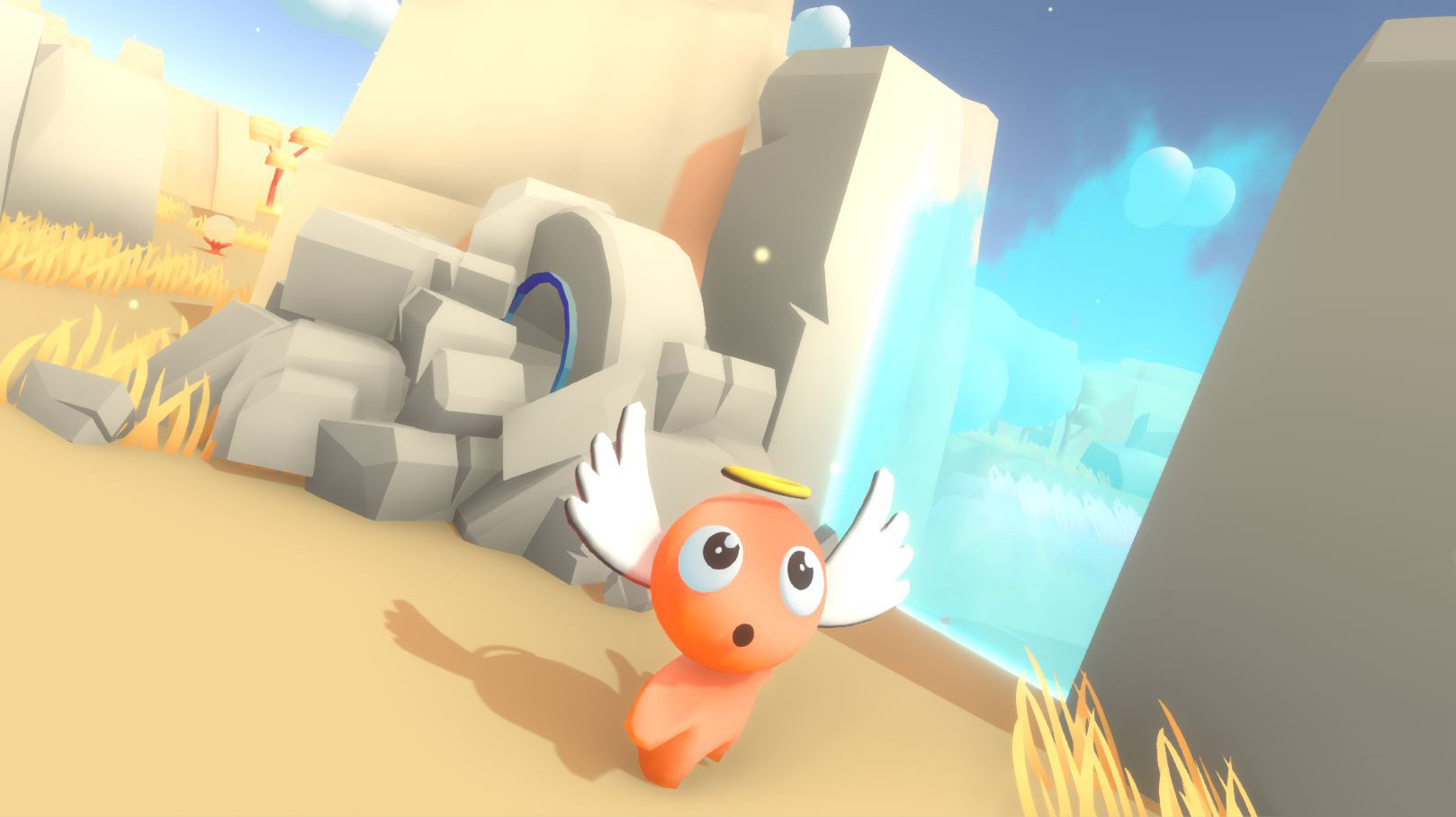 Screenshot of an enemy and a some environment objects (art not final).

Contrast Between Cute and Gory

Just like you can see in the picture above, the creatures that appear in our game are pretty cute. The colors are also intended to transmit a very calming and peaceful mood.
Well, that all changes when you arrive and start cutting every single one of them to pieces! *Blood everywhere*, *corpses everywhere*, *limbs, bones and guts everywhere*! 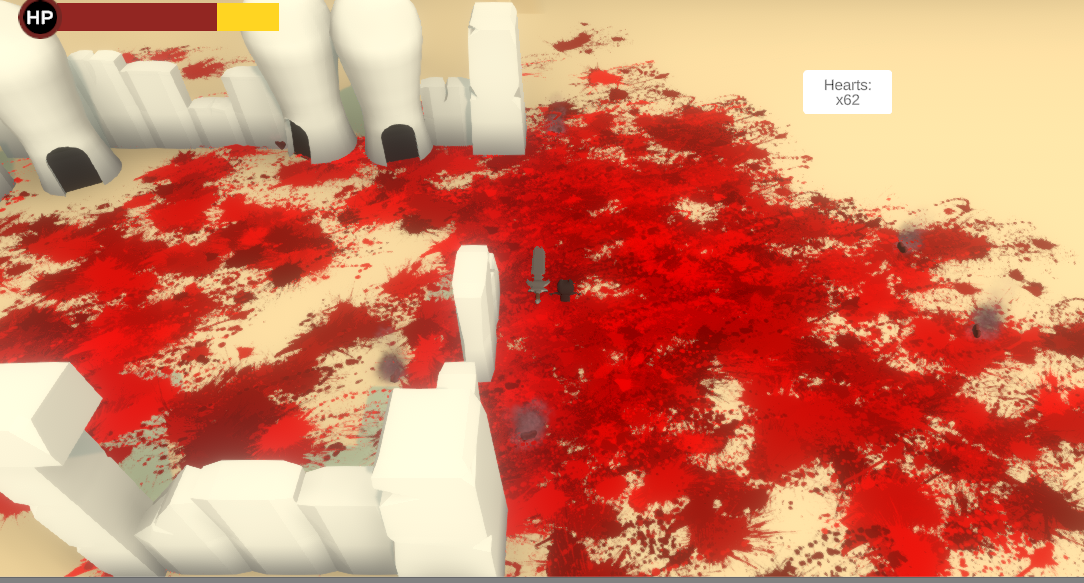 Blood splatters after a big fight (very old and early version of the development).

And finally, when you kill the Boss of the Zone you're in (remember there's 7 zones and 1 Boss in each zone), the entire zone changes from Blessed to Cursed, something like this:

And finally, one more aspect worthy of mention: non-linear progress. What this basically means is that the player is not bound to a specific order of progress, being able to explore the world to his liking and go to where he wants as long as he has what's necessary to access those locations. So, different players will most likely play the game differently, going to different zones and unlocking abilities, upgrades and etc in different orders.
It also promotes replayability which is great for players that like to replay games they love.

This are all the features that we think stand out the most in our game. Thank you so much for your attention and if you have any questions or any opinion you want us to know about this article don't hesitate to leave a comment at the bottom of this page!

Don’t forget to follow us to receive notifications about future articles regarding this project.