A devlog post about the state of Vagrus - The Riven Realms 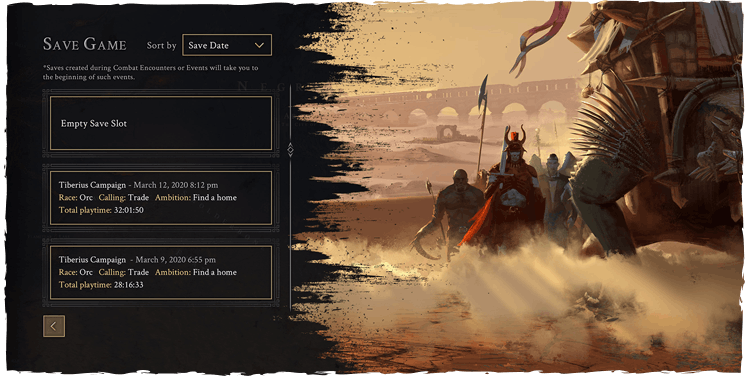 Manual Save
We have thought long and hard about how to deal with manual saves in Vagrus, because there are a lot of complications stemming from certain game elements. Do we let players choose mid-combat? Do we let them save mid-Event? Is there a point to Event tests if manual saves scumming works? These are just a few of the many questions that have arisen. 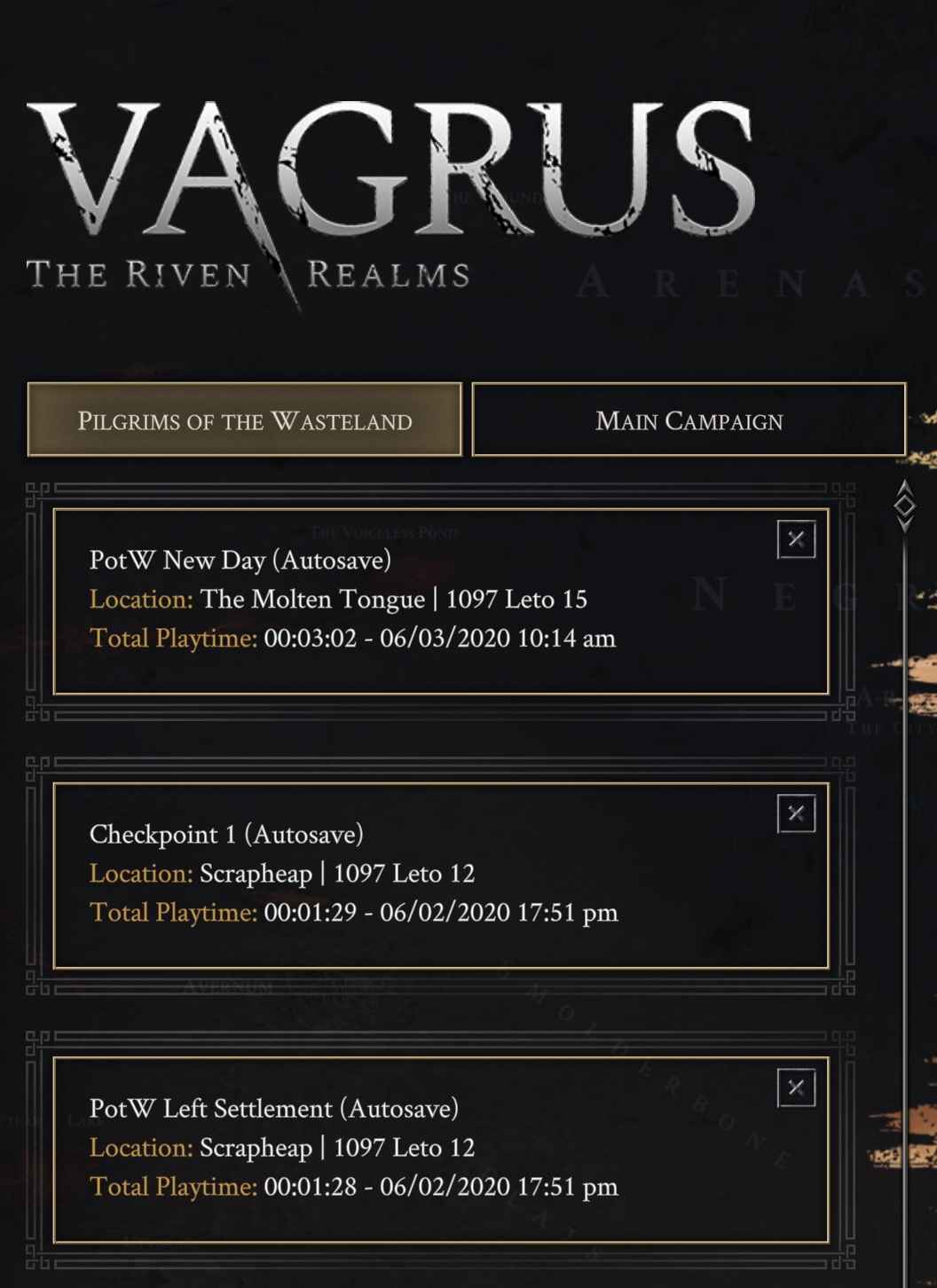 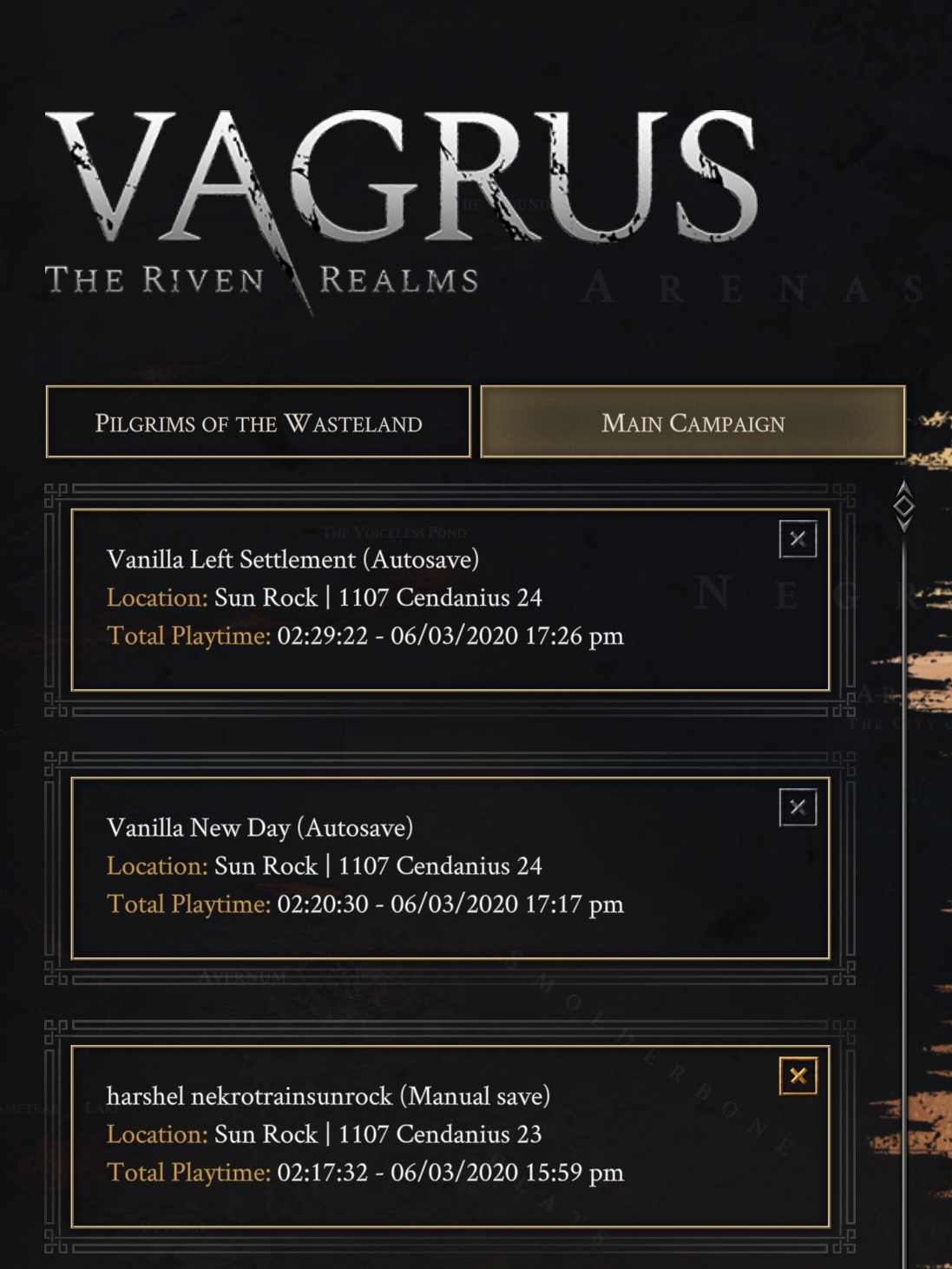 Eventually though, we could not imagine Vagrus without being able to save manually. We never set out to make a rogue-like and the Riven Realms can often slay even the best vagri quickly and cruelly. You might also want to replay certain quests differently and you should be able to load your game in such cases. So now that so many things are changing before the release of the Open World campaign, the time has come to implement manual saves and so you will see it pretty soon. That said, we will later add an Achievement to those crazy folks who can play through the game without ever saving manually. 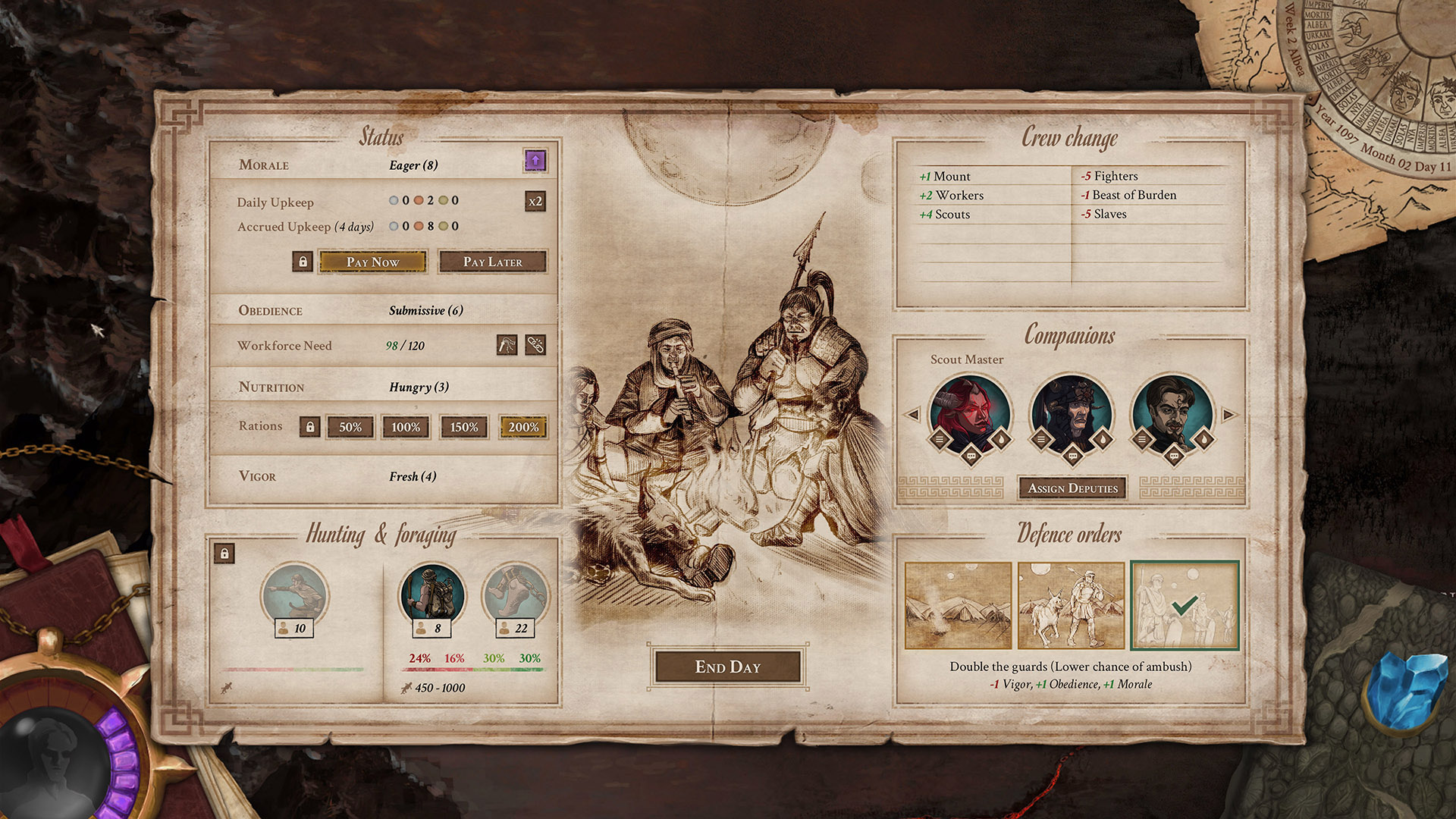 Keeping your comitatus well-supplied - or in some cases even keeping it from starving - has always been intended to be challenging in Vagrus, and it makes sense: you are the leader of a daring traveling company in a post-apocalyptic fantasy world where resources are often scarce and terrible encounters can turn a simple trip into a living nightmare.

But we also hear you, dear players, when you say that sometimes it is a bit too difficult to keep your crew from starving, and so we are working on a couple of small features that we have planned to include from the start and that would make life easier for you when it comes to supplies. Let's take a quick look at what these are.

Foraging is a camp mechanic and you can use it to send out workers or slaves (or both) to gather supplies in the camp's vicinity. This yields supplies when the day is ended, albeit not a lot. Its role is to provide a relatively steady stream of supplies to help out with long journeys over the wastelands.

When sending out workers, the success chance is based on the yield of the region modified by the number of workers and their Vigor. In case of a critical fail, you can lose Vigor and even - very rarely - workers.

When sending slaves, Obedience is reduced, then depending on the test, you can have one or more slaves escaping.

In both cases, the Survival perk levels also factor into the test you roll.

Hunting is a riskier business and it is a new way to make use of your scouts. The supply yield of hunting is either high or very little depending on the test roll that is based on the region's base yield, the number of your scouts, and your Hunting perk levels. The Venatoris deputy role also grants significant bonuses for this action. Hunting at the camp also tends to bring back secondary loot derived from beast kills, like hides, ivory, or chitin. There is also a chance that you will lose scouts when going hunting - the dangers of the wasteland are never to be underestimated.

A very welcome side-benefit of both foraging and hunting that sometimes your crew finds and brings back loot from these excursions. Loot is mostly taken from fallen creatures of the region (like ivory or bone) but sometimes they can find other things as well. This loot is never abundant, mind, but can sometimes give you a nice little bonus. 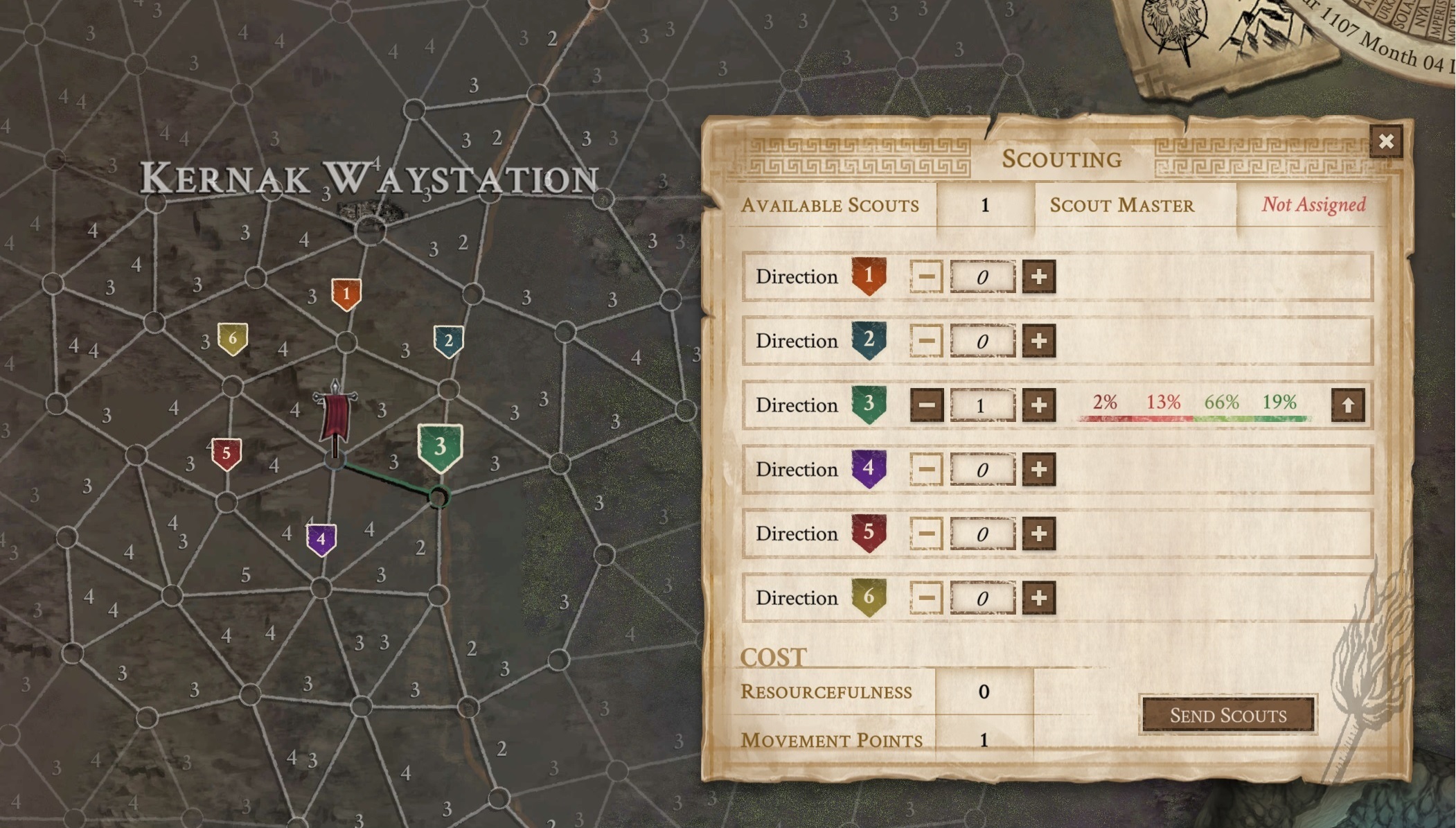 We are thinking about giving scouting results a new use: it would reveal the node's yield for hunting and foraging. These have a range for the region but individual nodes can be much more or much less abundant in supplies to claim. It is not sure when this will be added yet. 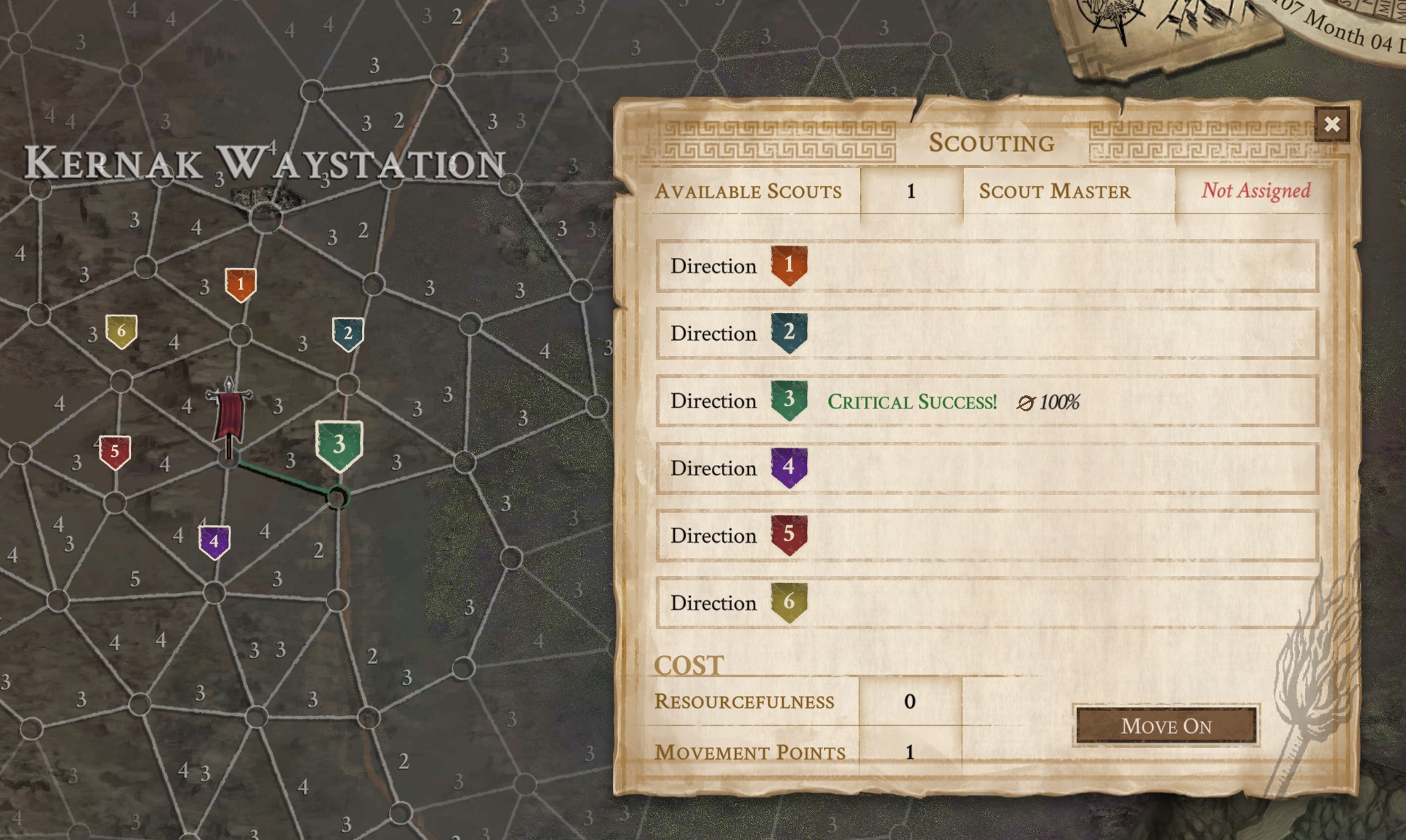 So that is a short rundown of what we are planning for this feature. We hope it will help with the cost of living and surviving the wastelands of the Riven Realms. What do you think?