Ever since we came up with the idea of Vagrus, a game where you manage a comitatus, we knew we needed to develop an elaborate, dynamic trade system that would serve as one of the major features of the game and would also aid in fleshing out a living world. 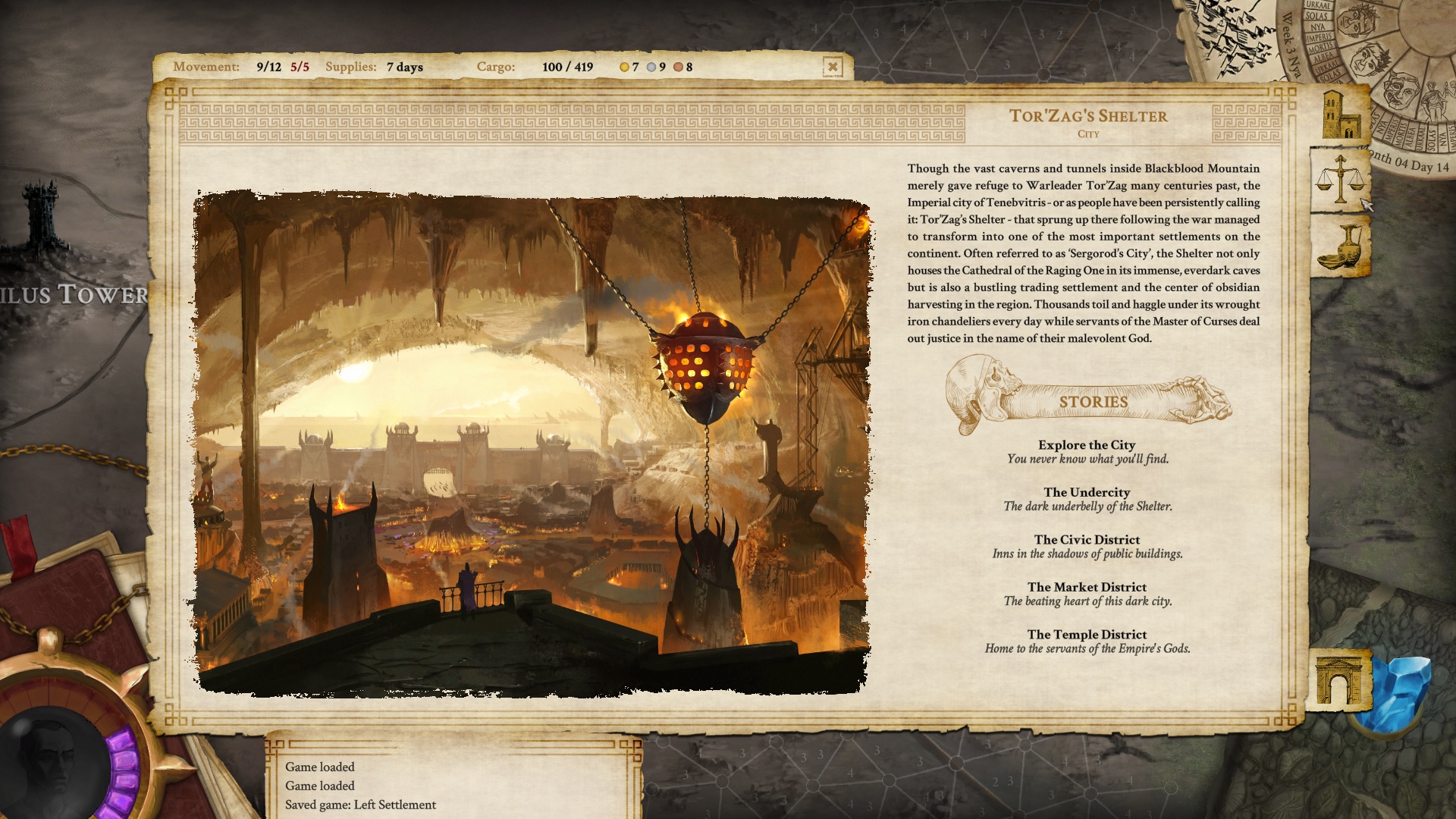 While trading was always to be one of the main sources of income for the player, we also wanted to avoid creating a pure trading simulator game. It's not that those are not fun for the right people - stories about Gabor dominating the Auction House on our server in World of Warcraft for a period of time still surface in conversations among friends - but because our strengths lie elsewhere. Our unique setting, The Riven Realms, and telling stories with memorable characters was the first and foremost motivation to create Vagrus, so it was also much more likely to excel in that rather than in a simulation - which we knew relatively little of.

For the same reason, our goal was to come up with a game design for trading that supported story-telling and wasn't gonna overshadow it. Hence, trading in Vagrus is just profitable enough to keep you going, to cover the upkeep and consumption of your crew but not much else, making the player look for additional opportunities in the form of Events, carrying passengers and news, or taking on contracts or tasks (a feature we plan to add later on).

Many players highlighted how deep yet consistent the lore and general workings of The Riven Realms felt to them. With a setting so strongly established and transmittable, the challenge of game design is how to integrate other more 'gamey' features into it without breaking immersion too much. With trading, the idea was to create the feel of a natural flow of goods from where they produce them to where others consume those. 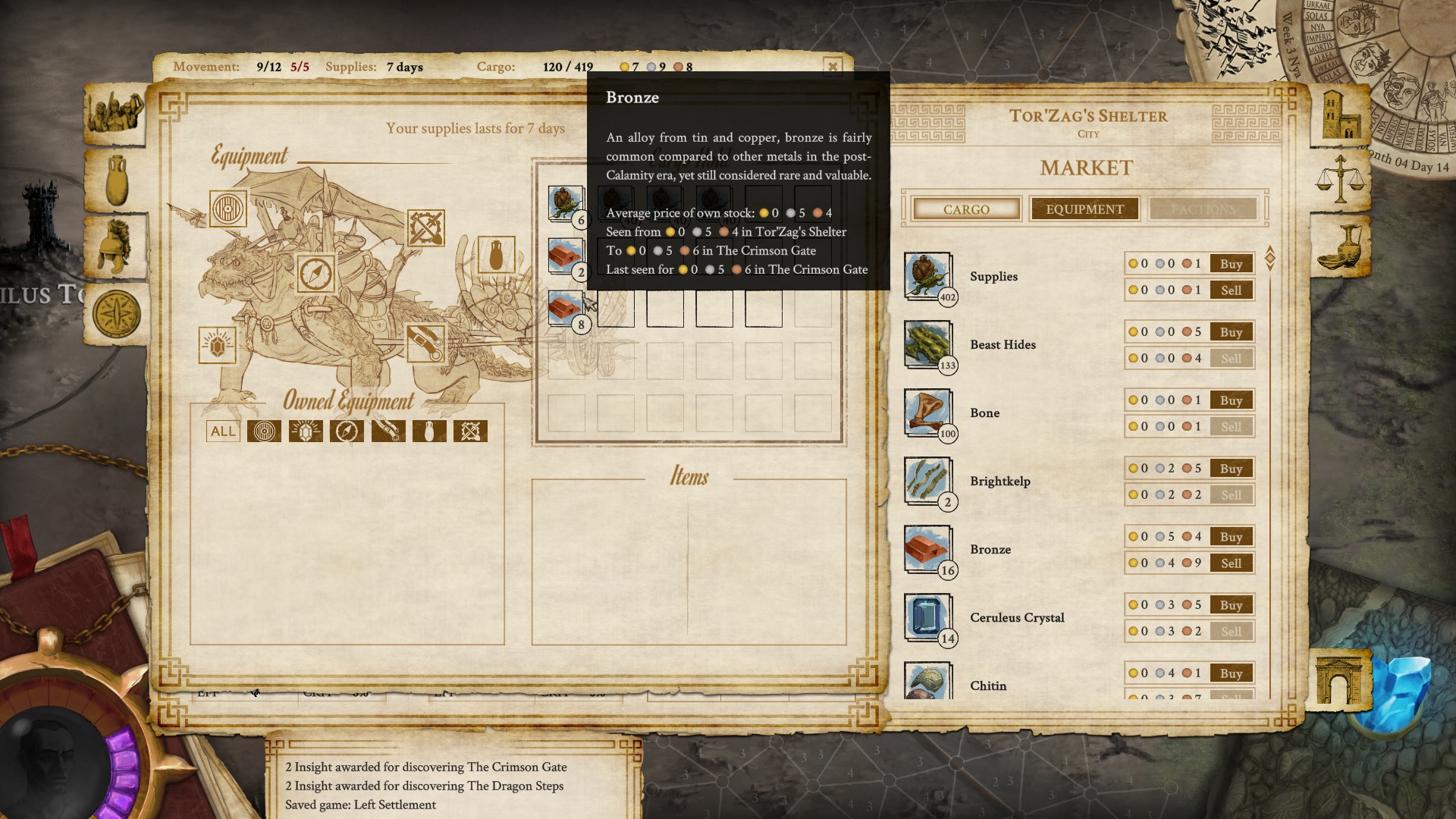 After several prototypes, which either were too complex or too shallow, the one we have been working on implementing into Vagrus during the last few weeks involves quite a number of variants.

For each settlement, from cities to encampments, we mapped out which goods are created there and whether that was enough for that place. Do they produce a surplus or need a bit more from other sources, or perhaps are completely dependent on the merchants of the realm to bring certain goods to them, or they do not trade at all; we came up with a scale with ten stages describing all kinds of scenarios. 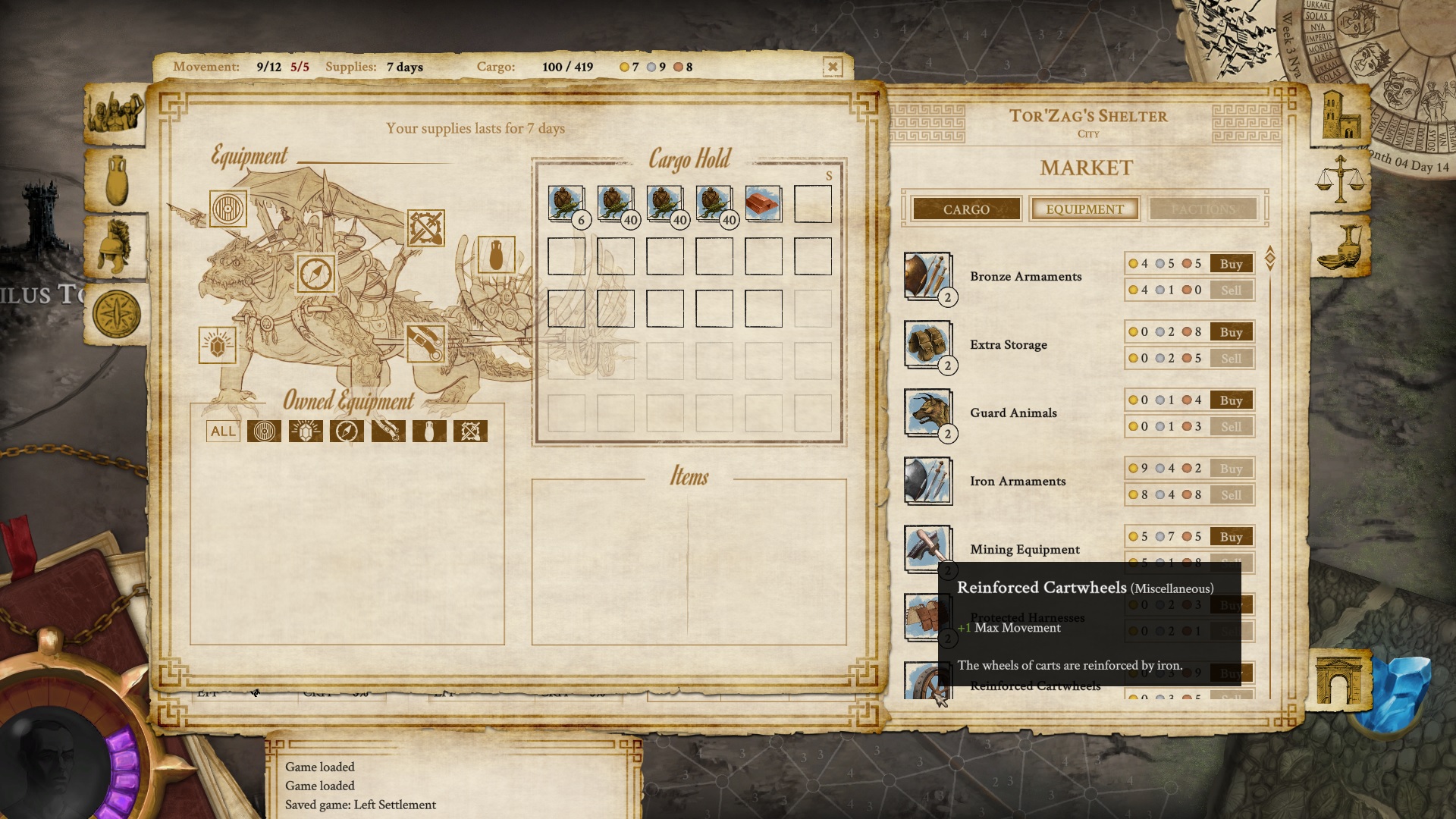 Goods on the Road

If something is not mined, crafted, or produced locally, then it's imported from the closest place where they have a surplus. Of course, no one in their right mind would risk their money - and especially their lives - to carry cargo for the sake of doing good. They do it in hopes of profit, which directly correlates to how distant a location they need to transport those wares from. Towards the right direction that is. In some games, it's enough to carry goods and it's value increases based on how long you have been holding on to them. Not in Vagrus. Players can only make a profit by following the natural commercial flow, from sources of goods to where they are are less available. Carrying cargo between two main sources will result in a net loss if one considers the cost of labor and upkeep.

The Size of Settlements

Of course, commerce is different in a big city than in a small encampment next to a quarry. It impacts the range of goods available on the market, their quantity up for sale, and their prices as well. Cities are generally a bit cheaper since more comitati pass through them, keeping the vital flow of goods running. 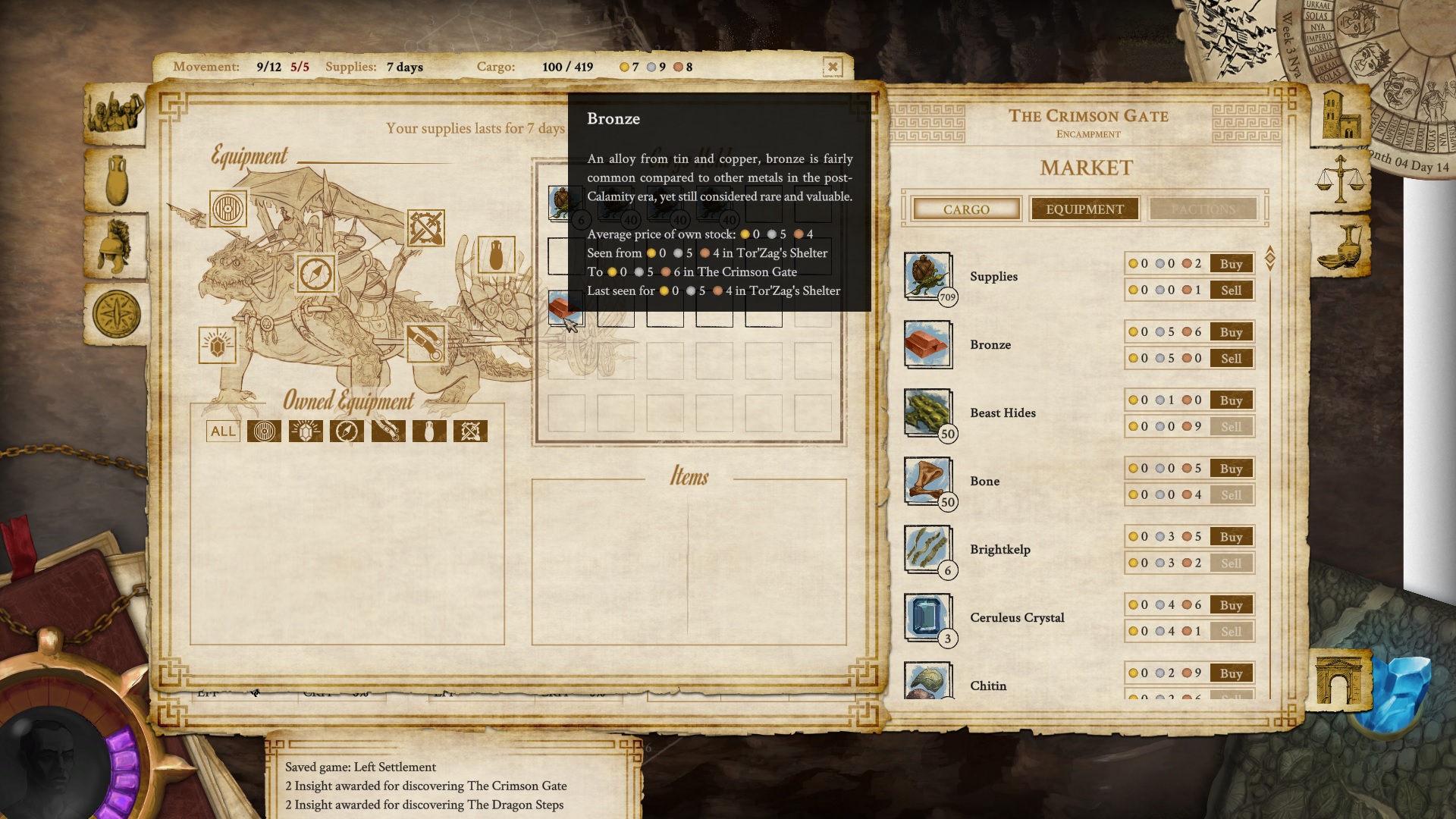 The Riven Realms is a living, breathing world with a grim reality beating down on its inhabitants. Famine, epidemic, oppression, and rebellions are all too known phenomena. Such events affect the market in many ways. A source location suffering from a plague would have less available workforce, leading to the drop of production and ultimately to the rise of prices. Famine in an area means the drop in the number of paying customers and so merchants often drop their prices to be able to make any trade at all.

Time is of the Essence

For the flow of goods to appear even more realistic, we record conditions in time and their effect ripples through the region(s) like a whiplash. The farther the distance between two locations where essential trade occurs (a source and a buyer) the later in time the players will see the prices going up. It may well be that a slave revolt has already been dealt with by the time the price of pottery increases in a place importing that. 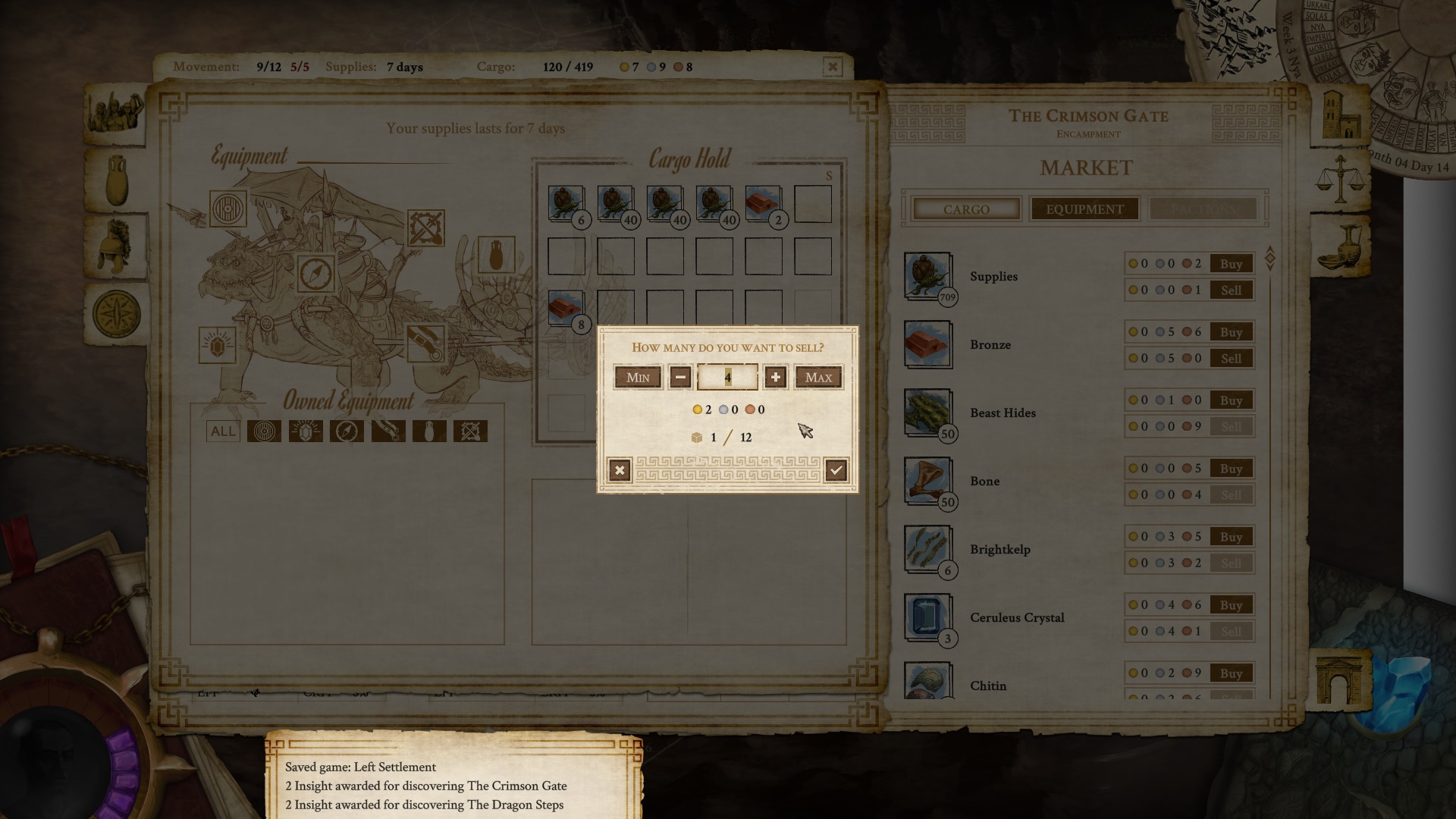 Gaining advanced knowledge about an epidemic that stopped, which enables one to sell all their hoarded cargo before the prices on the market drop, can be worth a fortune. Gathering rumors like that would be no small feat but extremely profitable if acted upon.

With the current implementation of our trade system we are not yet adding the generation of rumors about the change in conditions but it is certainly something we would love to add to the game sometime in the future, so you might see it as a future milestone in our Fig.co campaign.

Let us know what you think about the design and how our development progresses, and of course, thank you very much for your continued support!