At long last, Scouting is making its way into Vagrus. It is a vital feature in navigating and surviving the many wastelands of the continent of Xeryn. 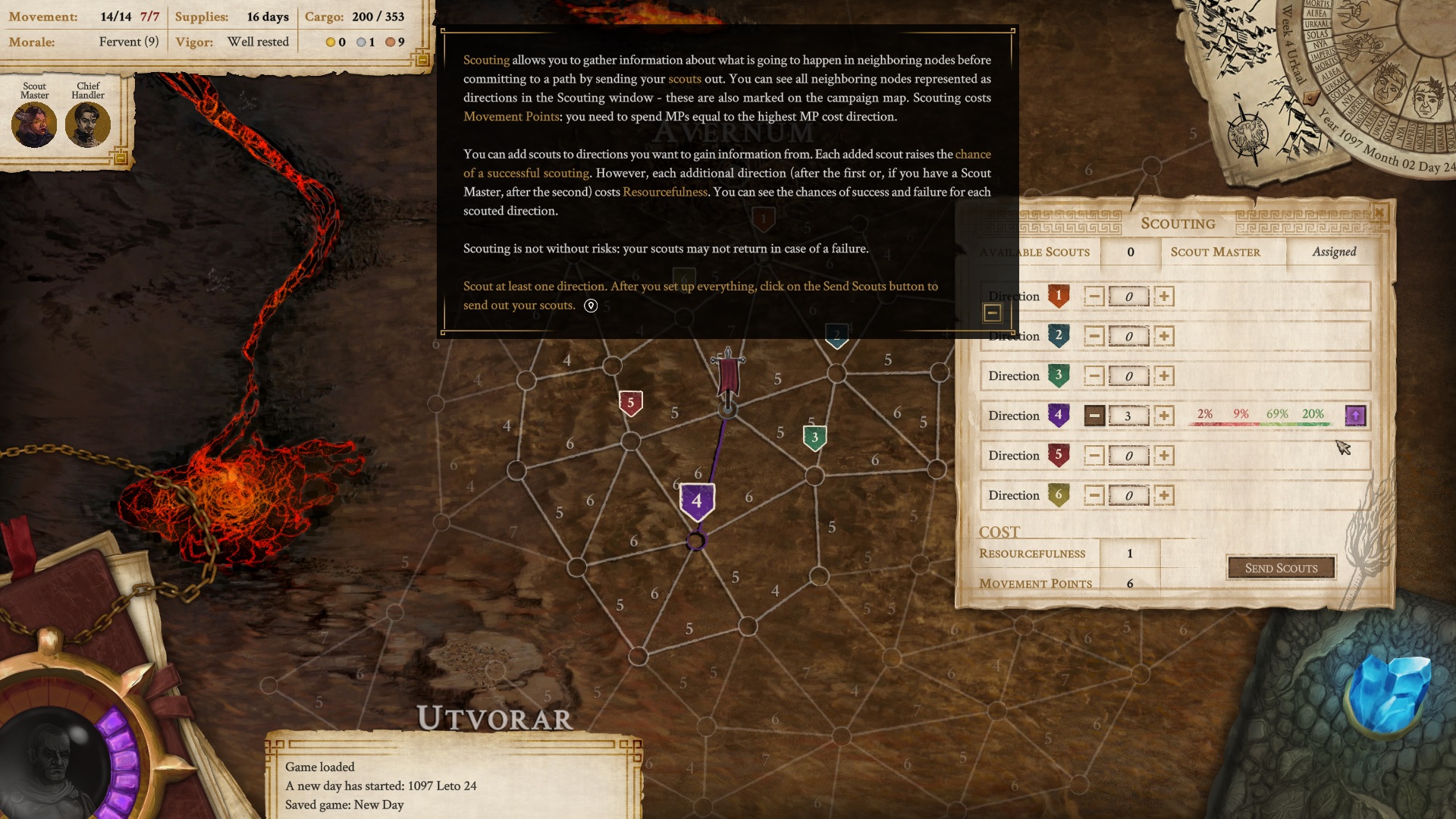 What is Scouting for?

Scouting has two main uses. First, it can give you an indication of what to expect when moving onto specific neighboring nodes on the campaign map. Though these are given in percentages (what are the chances of a fight, and event, or that nothing happens) it still gives a rough idea of risks so that players can make informed choices. Second, Scouting can indicate if there is something fixed on a specific node (either a fixed Event or a Task objective for a faction). This is immensely helpful when looking for something out there in the wilderness with only vague directions to go on.

How do you use Scouting?

You can use Scouting when standing on a node. When you do so, you will have the option to select which neighboring nodes you wish to send scouts to - more than one route costs Resourcefulness for each additional node scouted. Naturally, you'll need scouts to even initiate this action. Scouting costs Movement Points: you have to pay equal to the highest route MP cost. The chance of success for each scouted node depends on how many scouts you send that particular direction and a Scout Master deputy provides further bonuses. 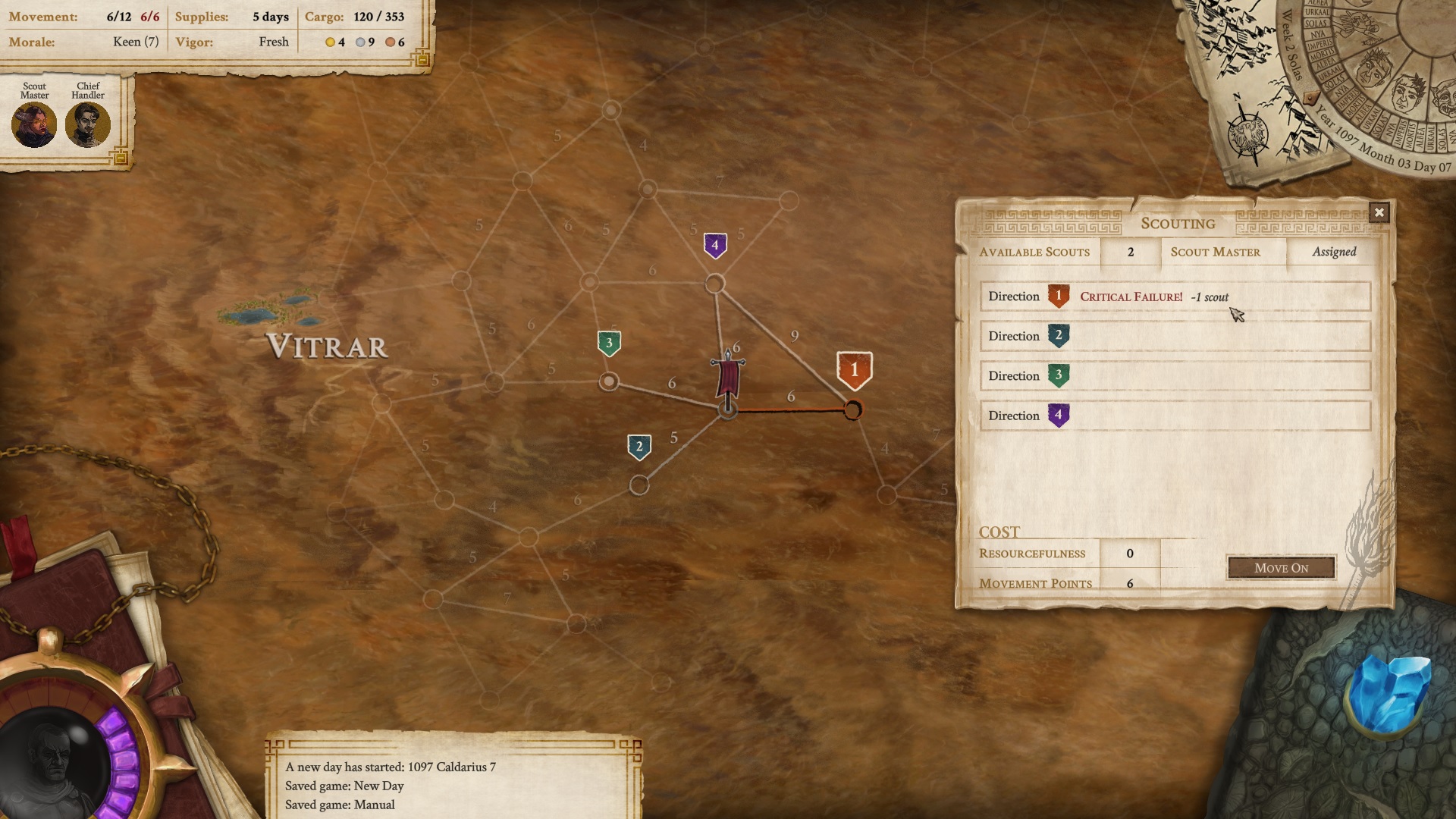 What are the risks of Scouting?

Apart from spending the Movement Points (and potentially Resourcefulness), your scouts have a chance not to return (having fallen prey to one of the many dangers of the wasteland) when you roll a critical failure. This makes spamming Scouting a bad idea, even with a Scoutmaster whose presence reduces the chances of a negative outcome. 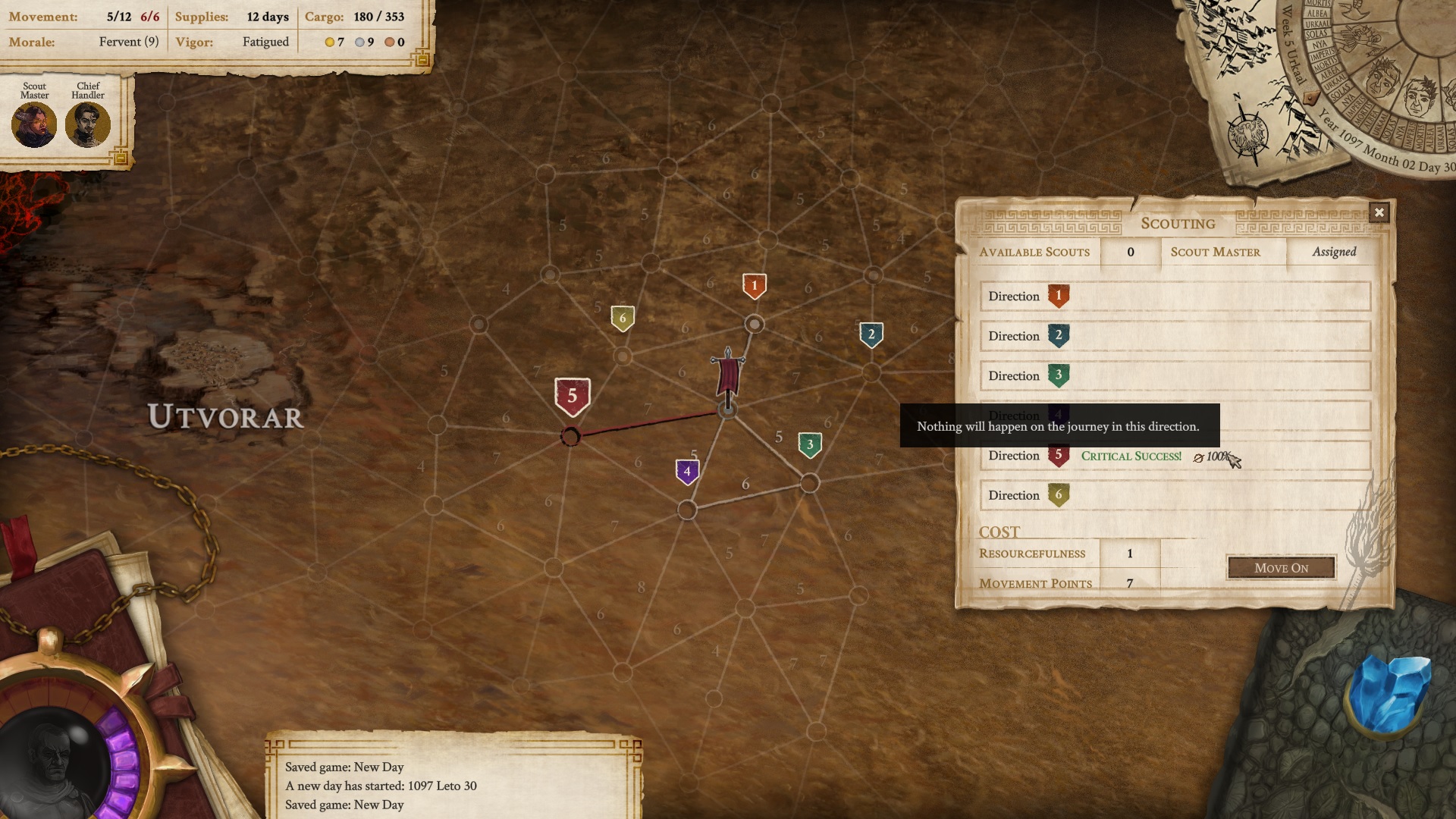 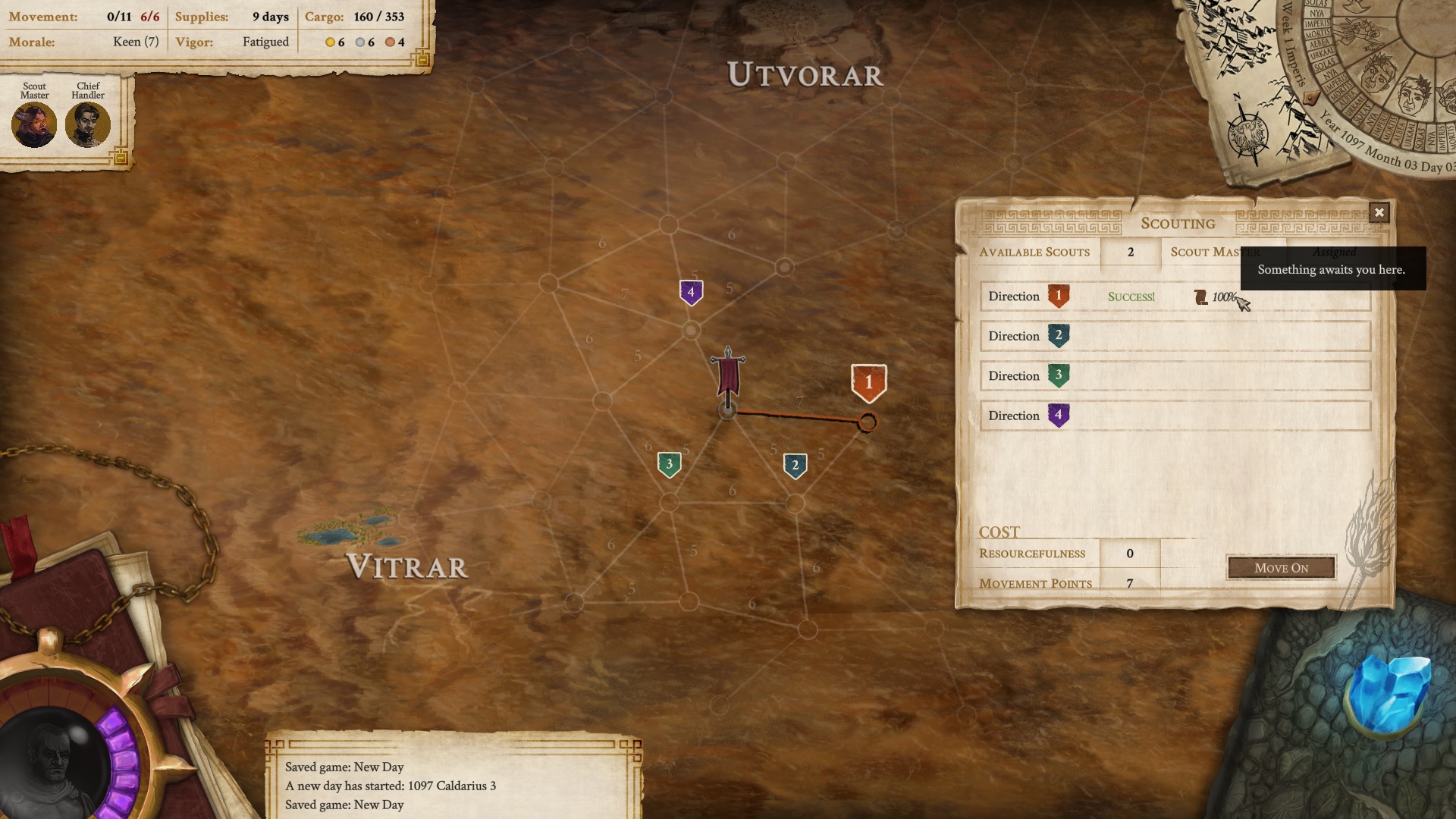 A successfully scouted route provides percentage chances of an Event, combat encounter, or nothing happening. A critical success provides exactly what is going to happen (Event, encounter, nothing) and in case of an event or an encounter, it gives a relative idea of what to expect (obstacles, boon, chance for combat, the challenge rating of a fight, etc). 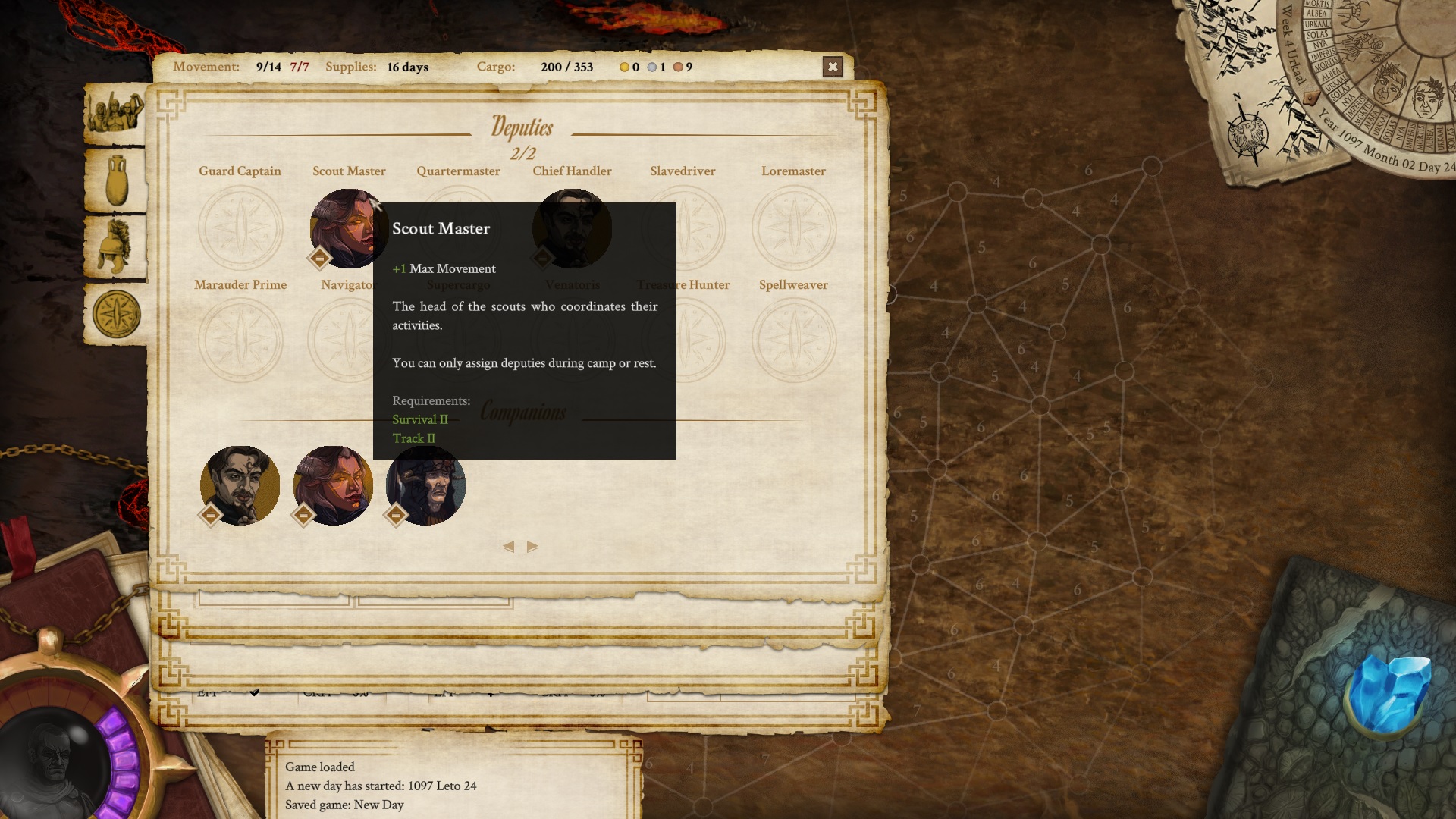 One of the deputy roles, the Scout Master is extremely useful when it comes to Scouting (as expected). When this role is assigned, it provides flat bonuses to critical success, and reduces the chance of a critical failure. Additionally, you can send scouts to a second node without paying Resourcefulness.