I probably said the last update was the biggest ever, but the next one is even bigger!

If you wanted to get a preview of this update I’m going to put it on the Steam beta channel for a week or so until I know there are no obvious bugs. If you have not used the Steam beta before you can right click Undercrewed on your Steam Library and go Properties > Betas > Access Code: cooltestpilot

This latest update features the new level Celestus that has many new mechanics.

Enemies can now have shields of their own, this was so cool and entertaining to shoot up I couldn’t help but go back and add them onto a bunch of existing enemies. 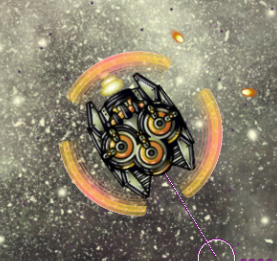 This level has very defensive enemies that have EMP attacks that turn off parts of your ship, you will find yourself having to run around repairing and using alternate rooms to stay alive.

I’ve added in some pretty cool tech that I have been excited for. I’ve made it so that some sounds can be so loud that they obscure other sounds around them:

Again this is just being deployed onto the beta branch, if you are quite happy to wait an extra week I will deploy it to live soon.