We’re getting close to our Greenlight debut! We've had all hands at battle-stations for the past week, and we’re getting some results! Check ‘em out!

Another Week in the Life of Dyadic

Hey there, and welcome yet again to Dyadic’s weekly developer blog! As always, I'm Jack, Creative Director for Handsome Dragon Games, and I'm here to fill you in on what’s been happening over the last week. With our Greenlight debut coming up on Friday (July 31st), it’s been a busy week. Much like last week, there’s been a lot going on in a number of different areas, so let’s go through them one by one.

Firstly, we have the levels. This week we've all been running through the levels and making all kinds of adjustments. I've been working on making the levels more appealing by adding more detail to the environment, whilst the programmers have been thoroughly testing their various mechanics in the levels for any stray bugs we may have missed earlier. Additionally, I've been revitalising some of our older levels and updating them to fit with our new mechanics and themes. Whilst they've still got a ways to go, they’re coming along nicely. The faded detailing on the walls is another layer of aesthetics the levels now feature.

Fun fact: This level was originally meant to be part of the first prototype, but was cut early because

it made the prototype far too long. It must be challenging!

Next up, we've got some more new art. Art for the crusher, the revival shrine, the trapdoor, and the falling stone slab all have finalised art! And I must say, our artist Angelica has done an exceptional job (as always)! We've even got several colour variations of some for the game’s different zones. 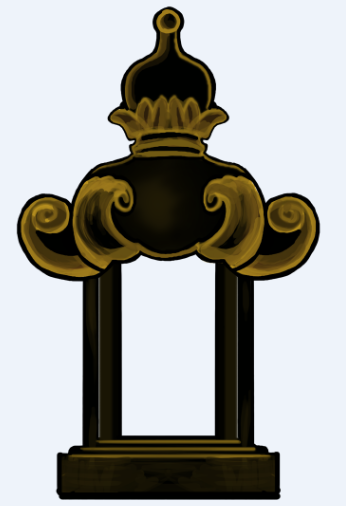 These things are fuelled by some kind of arcane magic that won’t let you die (well,

they won’t let you stay dead, at least). Best make good use of them!

A mechanism much more primitive than the crusher, but equally deadly.

Lastly, we've got all of our programmers efforts. Corey, Callan, and Jared have all been working hard to iron out any bugs and errors they can find within the game. Unfortunately, most of this stuff isn't something you notice within screenshots, so there’s not much I can show you. But rest assured, thanks to their efforts the game is running better than ever now.

So, that’s another week in the life of Dyadic. Now we just need to properly collate all of our game footage and images to get ourselves ready of Greenlight. Don’t forget, we’ll be up there on July 31st! Do us all a favour and give a thumbs up!