First development update! Well technically that is not true as I explained in this post. Anyway, let's get on to the latest on Power Heroes!


Chests are now an upgradeable item in the shop. Upgrading chests increases their chance to drop more coins.


Cocos2d only supports sprite tinting by reducing RGB values from their original. I wanted enemy sprites to flash white when they were hit so the native Cocos2d implementation was not enough. Luckily there are guides on the web to implement additive tinting, like this one: Digitallybold.com.


The character select screen is now looking something like this: 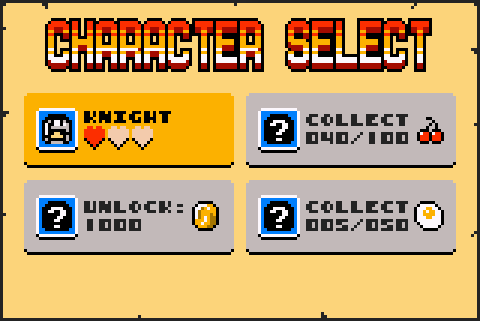 There is one hero available (the knight, our starting character) while three "?" heroes are still locked. One of these seems to be unlockable by spending 1000 gold coins and the others by collecting specific items: cherries and fried eggs (don't ask why).

I think I will move the shop button from the title screen to this screen. I also need to add a coin balance and to do that I have to move things around to make it fit.


I have spent a lot of time on a basic upgrade/unlock framework so that it would be flexible to add more stuff. It's still not perfect and needs more work, but it's better than before.
Post a comment
Sign in or join with: