Hey all, time for an update on how development on the game goes. A lot to talk about on the subject along with some announcements about the YouTube Channel inside!

Hello everyone and welcome to our latest development report!

Let me start off with that it was another slow cycle. A lot of my time gets eaten up by work and my contractor side job which does not leave me a lot of time to work on the game. That said it also has to be with me procrastinating way too much. I am going to try for a flurry of activity late December when I take some vacation from work to make a very long weekend.

So let's talk about what did not get done first; air out the dirty laundry so to speak. I did not get the website redesign done and in fact I have not really worked on it at all. I will have it done for January's update and you can hold me to that, It is my second highest priority right now.

Also not done was any audio work other than something I will mention later. No new tracks and no work done on existing beta tracks. I will be buying the EastWest CCC 4 Pro package (for a hefty sum even at 90% off) sometime in December so you may start to see some higher quality stuff coming out next year.

Now for what I did do.

On the coding side I wanted to tackle something now that will simplify things going forward procedurally for me. That thing was to marge all of the data collection functions that I am using to get database data. I have started the process but there are some complex issues to deal with such as how to handle resources as a single entity within this area of the code while also supporting the modder added resources if any are present.

This will reduce the number of functions being called by at least 160% but it will be close to code neutral, meaning about the same amount of code space will be taken up overall. This is more for quick editing and grouping of similar types of data getters rather than a refactoring to lessen the amount of code.

I also did a bit of work in some other areas related to the skill system. I began redoing some of the database class queries to the tables to account for new fields and for new tables such as the skill table. I also started planning the ground work for supplemental tables that will handle multi-reward/requirement situations with other objects (like missions).

I managed to get one infograph done last night (I actually started and finished it last night) for The Chosen. I will see if I can't get more of these done for the next update but they are not that high of a priority. 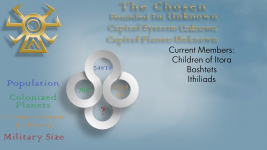 For audio all I did was some tweaking to the beta trailer track so that I could use it as part of a temp intro video for the videos on the channel going forward which is a nice segue into the more eventful news.

I have just released the first three videos in our first video series entitled Odyssian Void, An Introduction. The goal of these videos is to introduce you to the game and my ideas for it. The first three videos cover the basics of the story, the races currently planned for the game, and the race histories for three of the races. More will be coming mid-November and then another batch early to mid December (these will be the first few game mechanics videos).

Here are those videos:

Here is also the first part of Developer's VLog 17. It is a short two parter covering some of the coding I did.

So this is all I have for you for this report. Work is slow but steady which I how I like to do most things; rushing to the finish line usually ends up with a product not ready for release in my opinion and I rather like taking my time and polish the heck out of something instead.

Thanks for your interest in the game and I will see you for the next report in January of next year!