Good day. This is the third part of the development diary, in which I share with you the key points of the game creation process. (Well, on indieDB it's a first part)

Good day. This is the third part of the development diary, in which I share with you the key points of the game creation process. (Well, on indieDB it's a first part, look for part one and two on facebook page)

In this week, there was a problem with the fact that Microsoft Visual Studio suddenly refused to see the Unity project files. Seriously, I didn’t do anything, it just happened. However, the problem was resolved quickly and rather trivially: I just updated Unity and MSVS to the latest versions, and everything worked as it should.

Results of the weak

I began by changing the dungeon save system. Now the data is saved in a different format in such a way that if any class is changed, the object will still be able to load the data of an older version of the object. And there will surely be a lot of changes, so this is very important.

Then I created the template of the game interface. I implemented displaying of a room, and I also worked on the hero and his enhancing. 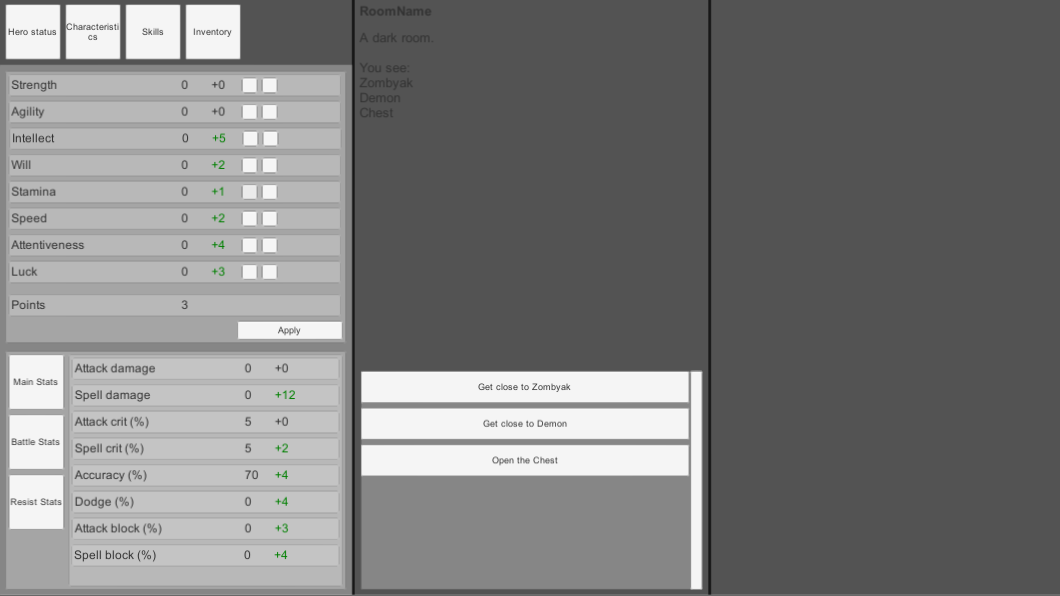 On the left is the hero's window. At the top you can see the “Hero status”, “Characteristics”, “Skills” and “Inventory” tabs. This screenshot shows the characteristics of the hero and its improvement. The stats are located in the bottom part of the characteristics window; they are also divided into three tabs: Main stats, Combat stats, and Resists. Green numbers show changes in characteristics and stats when you are improving them.

In the middle displayed information about the room. So far, the room objects are displayed simply as a list, in the future it will be more nicely, but for now it is important that they are displayed correct. Depending on the type of object, at the bottom appear the actions to interact with them, but so far these interactions are not implemented yet.

The right window is left for the information which is not related to the hero. It’s the dungeon map, the quests log, and the status of an enemy in battle.

Now I need to implement the possibilities of interaction with different types of objects. This is the opening of chests, taking items and entering into battle. I also need to think about the implementation of combat interactions, such as the use of abilities. In addition, for now there is no way to move from room to room, but I will do it later.

That's all, thanks for reading.