This first diary includes details regarding a roadmap and explanations of the role-play concepts. 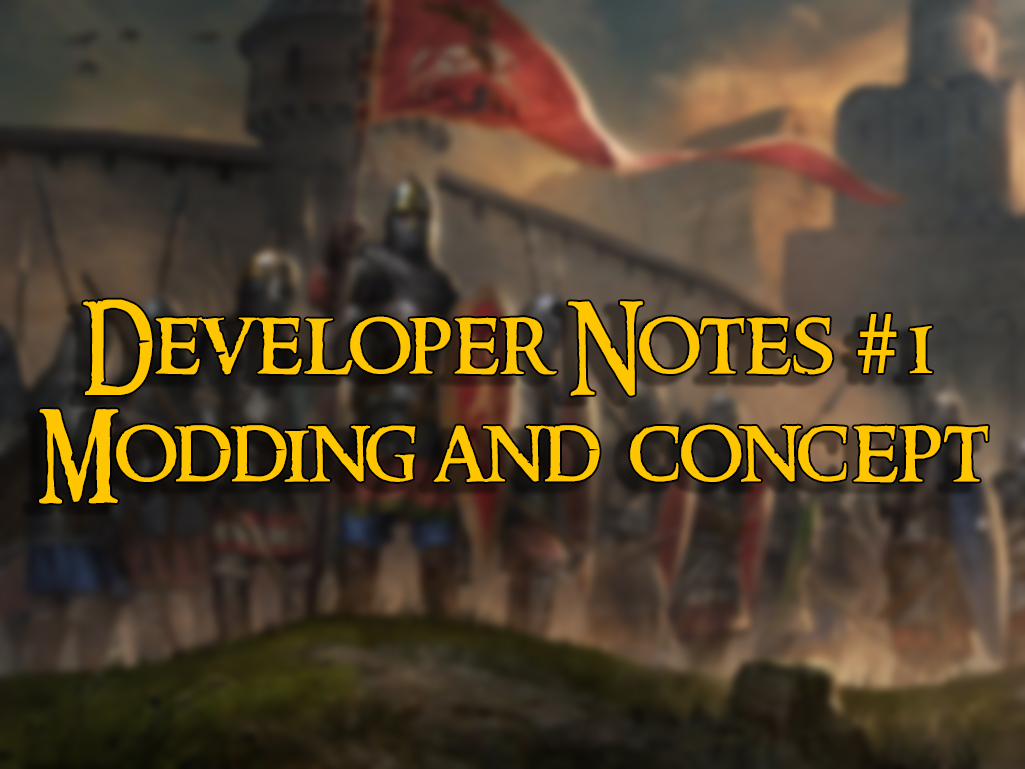 We've recently hit somewhere around 2800 views, so I'm assuming there is some interest in the module, which is a wonderful thing and obviously encourages me to continue. In this first episode of development, I wanted to explain what exactly we are after, how this will work out and what you can do on the server itself.

First of all, we must begin with the word roleplay. No doubt, there have been countless servers of roleplaying in Warband, which do not exactly share the serious, hardcore vision we have of the concept. This is nothing like Napoleonic Roleplay, or jailbreak, or whatever else form of light roleplay there is. For those that are not familiar with Warband RP, or servers such as SRP, CRP, MBRP (our first project), Pax, Krenn or Darkmyre, I will explain it further. The concept of roleplaying we are heading for consists of recreating a Medieval world, with as much realism as possible while attempting not to disrupt roleplay and user enjoyment. Of course, this Medieval recreation is also based on native Bannerlord lore, so we will not be using any historical facts or real life scenarios, but instead, make up a scenario based somewhere in the world of Calradia, and deviate only slightly from the default lore in order to make it interesting and cohesive. We do not currently have a scenario designed, but this usually takes less than a week to do and it's one of the steps that are taken after the coding part of the project is done. So, for now, take for example a border scenario. The scenario would be set at the border of two kingdoms in Calradia, let's say, the Empire and Battania. Once this is set, we will further design the factions, meaning the number of them, the hierarchy of them and so on. A server's optimal number of factions is around three or four, from our experience of over 6 years. These factions are led by faction leaders. The faction leaders are carefully selected players of the community whom have proven themselves to be reliable, active and have a good grasp of the roleplaying concept. These faction leaders, then, may start developing their individual history of their noble houses and their local history on how they came to be in power. They also develop their own positions for their houses under the form of a forum roster, where they create occupations that they can give to people whom apply for them IC-ly, or In-Character, which is the short term for the world of characters. Laws, announcements, recruitment standards, these are all IC things done by the players in order to ensure that their faction can provide amply opportunity for role-play to take place.

IC, or In-Character, stands for the world of roleplay and characters. This includes the knowledge of characters only and the sandbox universe where characters revolve. There is no player in this world, but characters. Characters may not use OOC information (Out of Character) in the IC world. For easier understanding, let's take a simple example. Your character, who is a guardsman in the year of 1257, would have no idea what a smartphone is, or have any ideas about human anatomy, or be even literate, for that matter. You, however, the player who is playing it, do know these things, but using them in the world of characters, or in IC, would represent metagaming and even powergaming (it breaks realism to bring certain concepts into role-play, such as being the best warrior and smartest scholar in the land). Such characters are frowned upon heavily by the veterans of the community, and thus, it's rare to have characters around that are good at many things. They usually specialize in either being passive (such as craftsmen, priests, farmers, average people) or active (guardsmen, soldiers, huskarls). It all depends on the character biography you create for your character.

Which brings us to the next concept - biographies. A character biography represents all of the important information you can write about a character. Things such as name, age, religion followed, personality, physical appearance and a section regarding upbringing (or character history) where one explains the entire concept behind their character and how its development shaped it. You would start with a paragraph on the childhood, then a paragraph for teenage years, a paragraph for adult life and so on. Some may write more, offering plentiful detail, some may write less. The more detailed and well-developed a character is, however, the more likely it is for you to be accepted into higher positions (such as being a nobleman) or to be regarded as a good roleplayer. However, just because you can write a giant biography, it doesn't mean you will instantly be given gratifications. Some prefer to write very little on their biographies and develop their characters with IC events that happen on the server, or through daily play. It is up to you, and ultimately, whichever method you choose, you will definitely find it fascinating to develop your character in an immersive and fun universe.

So, now, you have read the lore of the forums, you've found the faction you want to join, you've made a character biography and got it accepted. What next? Good question! Roleplay, in itself, does not have a goal. That means, you may do whatever you want with your character. Some people find satisfaction in chasing romantic relationship development with their characters, others find satisfaction in acquiring money and building wealth, some buy the best armor and weapons to show off their status, others attempt to sow dissent between factions or to attempt assassinations or faction take-overs. Some roleplay bartenders, farmers, bakers, guardsmen, some have no goals and just go with whatever presents itself. There are endless possibilities in your roleplay, and that is what makes it great.

Now, early access has been recently announced to come out on the 31st of March, 2020, with modding tools to be following some time after. In our team, we currently have people whom have both mapped and have programming knowledge and have had projects in Warband before, so apart from getting adjusted to the new tools, there should be no major delay. We hope the server to be brought up and ready within 6 months of the release of modding tools. Of course, you never know how these things go, but mapping-wise, the scene itself will be handled by myself, while coding-wise, I have spoken to a couple of people who would be willing to help out. Is this assured? No, it is a voluntary project, and as such, people can change their minds. If you have knowledge in C# coding or knowledge in Warband scene-making, please, do contact me. We would love to have volunteers help us with the project. Will this be a different module? Possibly, we are not yet sure how Bannerlord operates, but in the past, we've developed a scriptset for the native module, where certain features were added to make it into a sandbox, open-world roleplay server where a maximum size map was loaded, with various villages, points of interest and keeps on it.

Anyway, that's it for now. In the next diaries, we will cover features that we will be providing on the server and more about the roleplaying concept in Bannerlord.

We've also recently made a group on TaleWorlds - make sure to join it! - Forums.taleworlds.com