Greetings Troopers! Today we see the welcome return of the Developer Diary. Those of you who have followed us for some time might note that the last time we did this it was in the lead up to something big, so take from that what you will. This first entry in this new batch of Dev Diaries centres on FSDev Dnamro, a long time contributor to First Strike, starting off by creating the singleplayer mini mod for First Strike independently and then joining the Dev Team...

Today we see the welcome return of the Developer Diary. Those of you who have followed us for some time might note that the last time we did this it was in the lead up to something big, so take from that what you will.

This first entry in this new batch of Dev Diaries centres on FSDev Dnamro, a long time contributor to First Strike, starting off by creating the singleplayer mini mod for First Strike independently and then joining the Dev Team to become one of the main driving forces behind our Singleplayer portion of the mod, developing the bot support which has made First Strike's singleplayer and co-op modes so successful. Well enough of my waffle, I'll let him get on with it.

Since it's been a while since the First Strike team released new content, I thought it would be great to keep the community updated on what is in the works for the Singleplayer mode of the game. Life has kept the few of us still working on the mod busy over the last year and a half, with not as much accomplished towards the mod as we had planned. Progress is being made, it's just slowed down a lot more than we expected. Since my focus is on the singleplayer, I am going to update you on what is in the works with regards to the singleplayer aspect of the game.

But first, I will introduce myself. A long time Star Wars fan, I actually started modding with the Star Wars mod for BF1942, Galactic Conquest by creating a Singleplayer mini-mod called Galactic Conquest Extended. At the time, I did not have a high speed internet connection for multiplayer gameplay, so I learned how to add singleplayer functionality to the mod just to play off-line. I have been fascinated ever since then with the unique gameplay that Battlefield bots on large scale maps offers. So I was certainly going to add singleplayer to First Strike when it came out.

One of the biggest hold-ups in adding singleplayer to First Strike is that most of the objects don't have a working A.I. mesh, which is needed to create a Navigation mesh in game. The A.I. mesh is a version of the object that is used by the navmesh creation tool to generate the completed navmesh that is used in game. The navmeshguides the bots in how to walk around the map, on it or around objects. These are created with 3d modelling software such as 3DS Max. Without a working A.I. mesh, the objects are off limits to bots.

Below is the Tosche Station object from the Jundland Wastes map as it looks in 3DS Max: 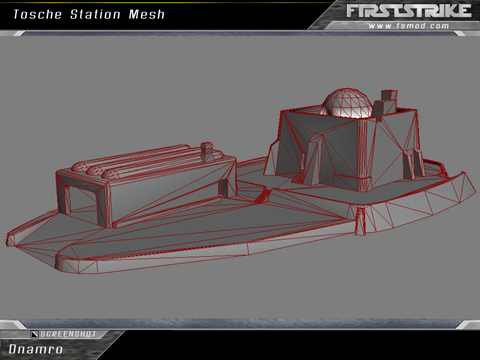 Now this is the Tosche Station A.I. mesh that will allow bots to walk on it: 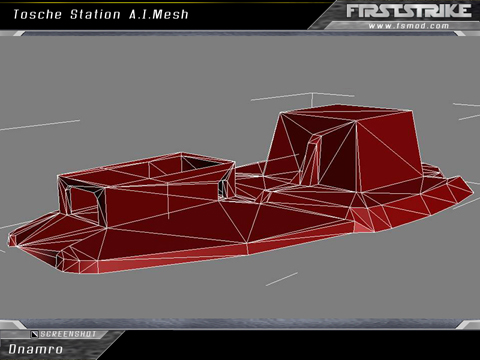 Finally, this is Tosche Station with bots running around on it: 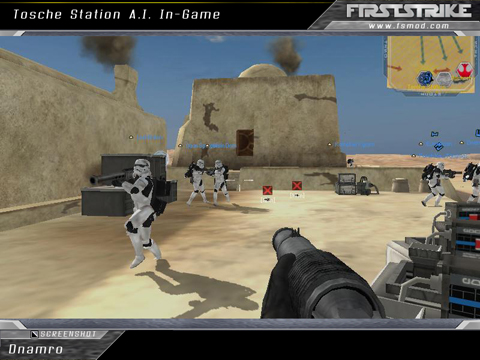 Most of the current singleplayer supported maps for First Strike were made without bots able to go inside or walk on most First Strike objects. For example, the combat area and flags were adjusted on the Tatooine maps so the bots do not need to go into any of the spaceports. The combat area is restricted on the Endor maps so that the bots need not go into, or walk on any structures. This is also why Null Sensor Station's combat area is restricted to the bottom of the map. In the past, I have had some of them created with help from within and outside of the mod. Most of the help has been with some of the simpler objects. There are very few people with the ability to do an A.I. mesh for any but the most simple objects, and none are in the First Strike Dev Team. Clivewil, a friend of mine from BF2 AIX did the A.I. mesh for the Imperial fort that I used in the singleplayer support for Rhen Var: Research Facility. Another friend, Apache Thunder did the A.I. mesh for Jabba's Town House.

Here is a pic of Jabba's Town House in 3DS Max: 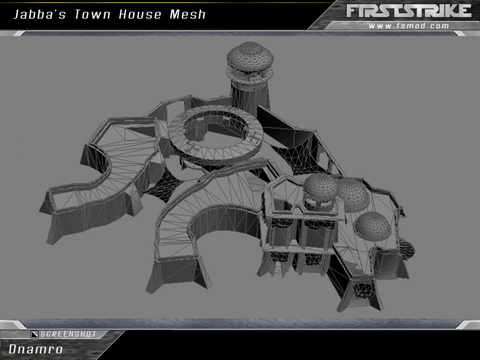 And now the A.I. mesh of the same place: 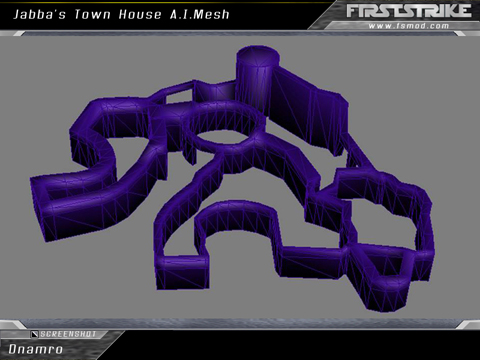 My skills are more in the coding of the A.I. support, not in 3d modelling. So in order to get more maps working with singleplayer support and to enlarge the combat area of current singleplayer support in the maps, it will require working A.I. meshes to be created for a lot of the First Strike objects.

To that end, I learned how to 3d model over the past year. This was a time consuming process, because there are no step by step tutorials on creating A.I. meshes. So, a lot of time was spent figuring out what works through trial and error after I learned basic 3d modelling skills. I spent some time with BobTheDino on the P4Free mod for BF2 to learn how to create A.I. meshes. This was very much a win-win because I learned a lot from him by working on several A.I. meshes for the mod and then he was able to help me get a number of A.I. meshes working for First Strike. I now have working A.I. meshes for over ninety First Strike structures, including most of the buildings on Jundland Wastes.

One trick that I figured out after a lot of trial and error is that the A.I. meshes don't have to have a floor or a roof for single story buildings. Here is a working A.I. mesh for a First Strike building that allows the bots to enter and go through it. 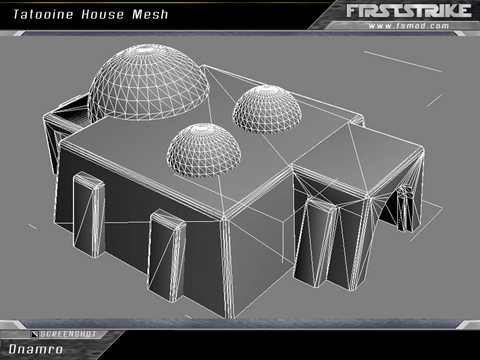 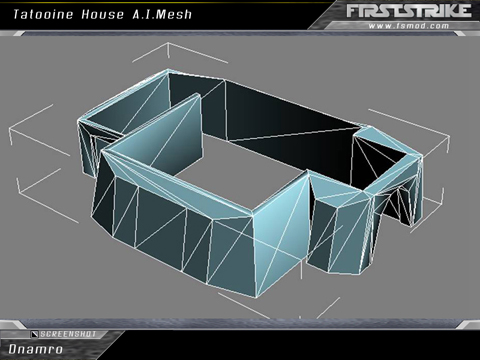 And finally, this is a pic in game of a bot running through the building: 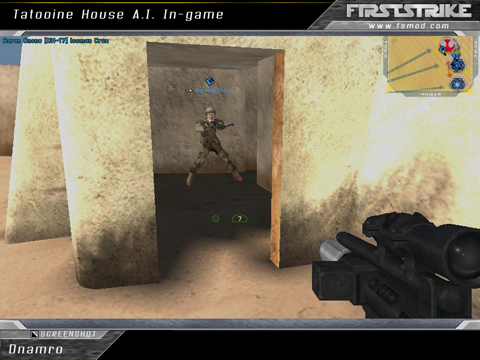 So what does this mean for the future of First Strike gameplay? Let's just say that if you're playing a singleplayer map or co-op on a server, those safe havens where bots could not follow you before will be getting a lot harder to find.

Yes, no more bots crowding at a wall thinking "why can't I go through here?" :)

Well, to be fair they'll still be doing that, but then they'll look at a door in that wall and say. "Y'know what? I can go through that door though."