It has been a great week for us all at Flying Squirrel Entertainment, we have been thoroughly enjoying all the sleepless nights. Sarcasm aside, we have something to show you lot once again.

It has been a great week for us all at Flying Squirrel Entertainment, we have been thoroughly enjoying all the sleepless nights. Sarcasm aside, we have something to show you lot once again.

Have you ever wondered how all of them characters in your favourite games get brought to life? It’s all done with motion capture technology otherwise known as mocap which tracks the movement of objects and individuals in 3D and allows them to be animated.

Indie developers usually don't have access to this technology and are forced to either buy standard animations which will limit you a lot in terms of unique gameplay, or make them manually by hand. Making animations by hand takes time and usually creates sloppy results, compared to motion captured data. But luckily a few years ago Microsoft released the Xbox Kinect which made iPiSoft’s Desktop Motion Capture system a dream come true.

This provided a relatively cheap way to motion capture animations since it doesn’t require special suits and very expensive cameras to make it’s magic. But this doesn’t mean that it’s less performing than all the other traditional motion capture systems out there.

This week we have been very busy capturing all sorts of different animations. Here is a quick picture of us recording some of them which could make for a few laughs! Once we process and edit the first few animations we will show you a video of how it will look. 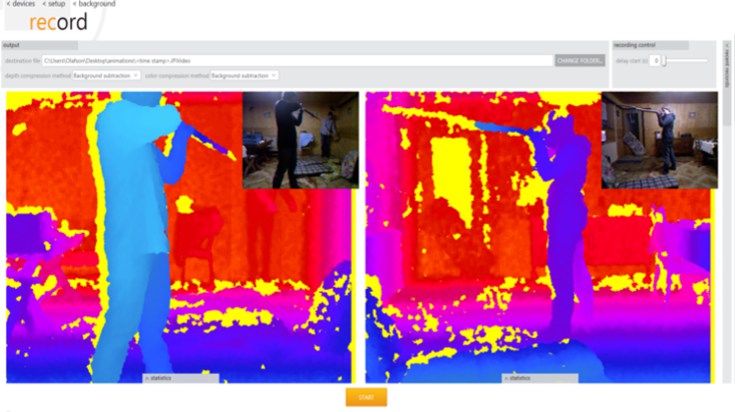 As we are still recording the coming week, feel free to suggest any special animations we might have missed and we might do them.

Cool! This game keeps getting better and better!

I think it would be cool if you could take a bayonet out and just charge at the enemy as a last resort or if your ammo is out. Another thing that would be cool is if you could just punch someone. an example would be if your running through the a forest or something with your gun on your back and someone just popped out of nowhere and tried to kill you, you could temporarily stun him with a punch and either run or quickly take your gun out. Just an idea :)

Hehe :) That is exactly what we were thinking about when making the animations. We will defiantly try to include that :D

As long as the surrender animation makes a comeback I'm happy, a Salute animation would top it off.