Welcome all! How are you? Today we will get back from where we last left and we will walk into the incredible territory of the three dimensions.

With her concept art ready, we can start Groma’s 3D model.

To do 3D model is like playing with play-doh, the main difference is that this time it happens in a digital world. Instead of clay or dough, we will be playing with points and lines, making planes and polygons. Shaping everything while taking the concept art into account.

Groma’s block, the idea is to have a model as soon as possible.

The first step into the modeling processes is to make a block of the character. The end result is nothing more than a really basic and simple 3D model. This is not the time to think and do little details, the intent is to get the proportions, the volume and silhouette right. The block offers a quick and solid base for the next steps, with it we can already get a model in-game. Then we can check if the elements are working as intended, and make any changes if needed.

The high poly is an evolution of the block, and it’s called high poly because of the high number of polygons in it. A lot of people inside Kinship would argue that this is the best work to do inside modeling. It’s here that we meticulously model everything, down to every little detail. Here we don’t have to worry with poly count, the objective is to get it as pretty and as close as possible to what we want based on the concept art.

Block to high poly. Quite a difference right?

As is with everything we do, we must always consider some technical limitations. The major one revolves around the diversity of computer hardware, and that no matter the hardware the processing power is limited. Everything we do inside Skydome has a cost in processing power, and that’s also the case with models. We are always trying to find balance, so the game can run consistently, with good performance in the largest number of hardware possible.

During retopology we lower the number of polygons for a better performance. 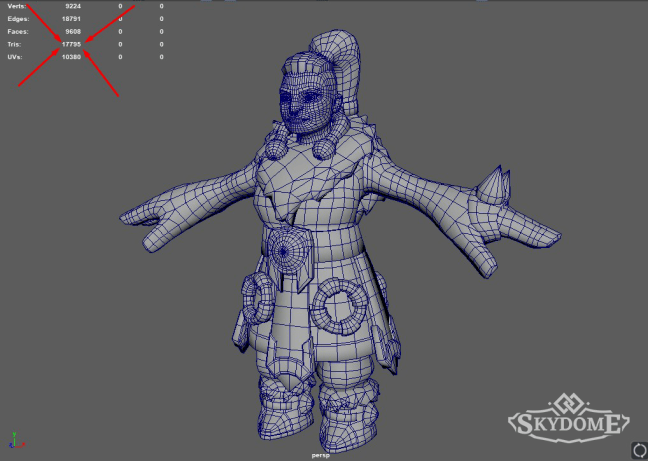 The end result is a model with almost 18k triangles. Skydome’s champions usually have around 20k.

We follow the low poly with UV mapping. But what is it?

Here we will literally turn the 3D model in a 2D plane, like unfolding an origami paper. This process is important because it’s used on the baking and texturing processes, which we will do next. 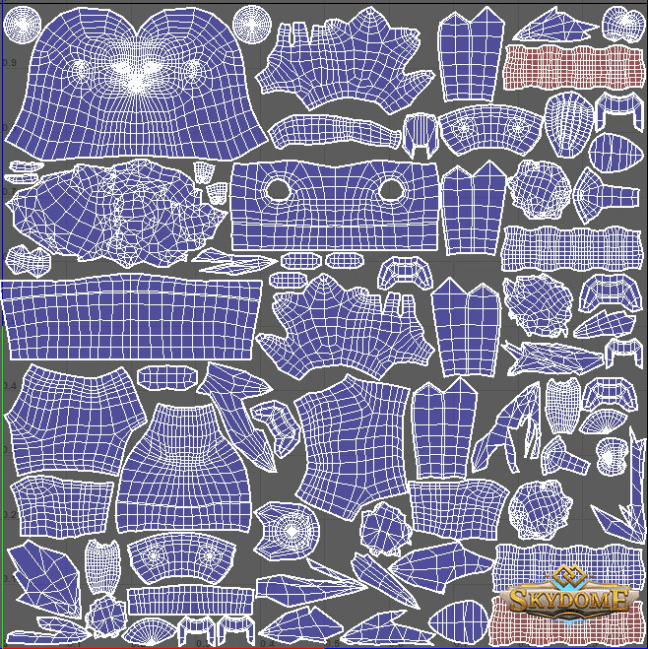 UV mapping of the low poly. The same thing, except this time it’s open. 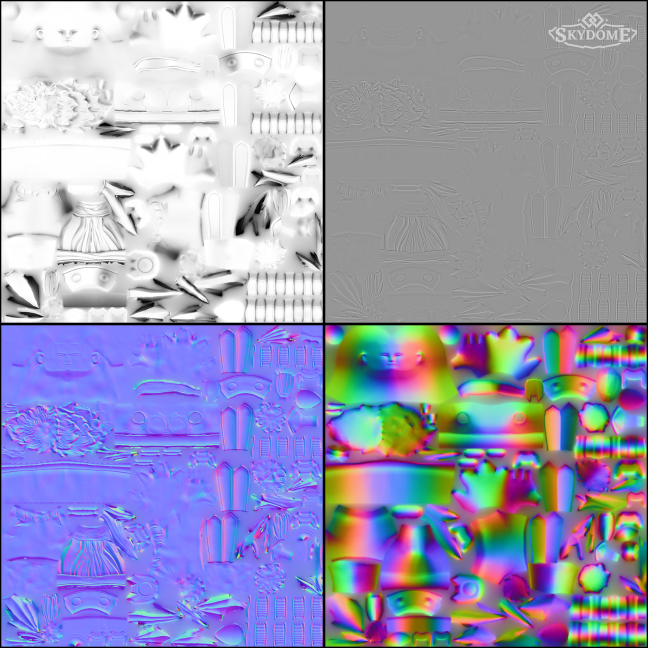 And lastly we will try and transfer some details from the high poly to the low poly. Details that were probably lost during the lowering of the poly count. We will do it through baking, which will compare the volume of the high and low poly models, along with a lot of other math magic. It will add some other info into the UV map and will also generate other separate maps. And it’s within each of these support maps, that we will find info on shadows, lighting bumps, dents and other details that will help the final model be a lot prettier while keeping it light performance-wise.

Comparison between the low poly with and without normal map

Low poly model with all the maps applied.

After all these processes, the 3d model of the Forge Commander is finally ready. Now Groma will go through texturing.

With a lot of stuff going on under the hood during 3D modeling, it’s hard to keep this conversation from becoming a technical borefest. We tried our best to keep it a little lighter, even knowing the risk of making it shallow. We hope you liked what we have shown, and if you have any question or comment, please let us know below!

Thanks for joining us and until next time!