Hey, welcome! Today we will be talking about something that has major impact on our life, something that we usually don’t give as much credit as it deserves. We can only see the world around us because of light, it propagates everywhere and is reflected and even absorbed by objects. Then our eyes work together with our brains to translate that very light into colors! Even at night, without any artificial light, the stars in the sky end up allowing us to see and identify what’s around us.

If there wasn’t any light source, it all would be pitch black. It is also thanks to lights that we can do lighting, that is, the manipulation of lights to achieve a desired aesthetic effect!

In the digital world, light sources and objects tend to work in a very similar way to their real life counterparts. All of that thanks to the current level of simulation achieved after years of hard work by programmers, everything powered by math magic, which handles it all behind the scene.

(Timelapse and the impact of the lights on the environment)

In games, just like it is in photography and movies, lighting is one of the most used tools in image composition. It works together with the action lines, the weight and the positioning of all the elements that are captured by the camera. It sets the tone, the character and atmosphere on a scene and gets a certain message to the viewer. An easy example is, picture a forest by night time, with a fog-impacted lighting. The impossibility of seeing very far, of knowing what lies ahead. It plays with the fear of the unknown and that’s the very message the viewer will get. However, the very same forest during day time would send a very different and contradicting message. The lighting plays a very large role on general feeling gotten from an ambiance.

With Skydome, we wanted that message to be optimistic, motivational even. An atmosphere that would make players want to take part in the coming battle, all the while making them feel good about doing it. Usually that kind of feeling is associated with a clear sky and plenty of sunlight. That’s why we chose to go with a clear, bright, daylight lighting, which also helps the understanding of the players regarding the characters and environment. 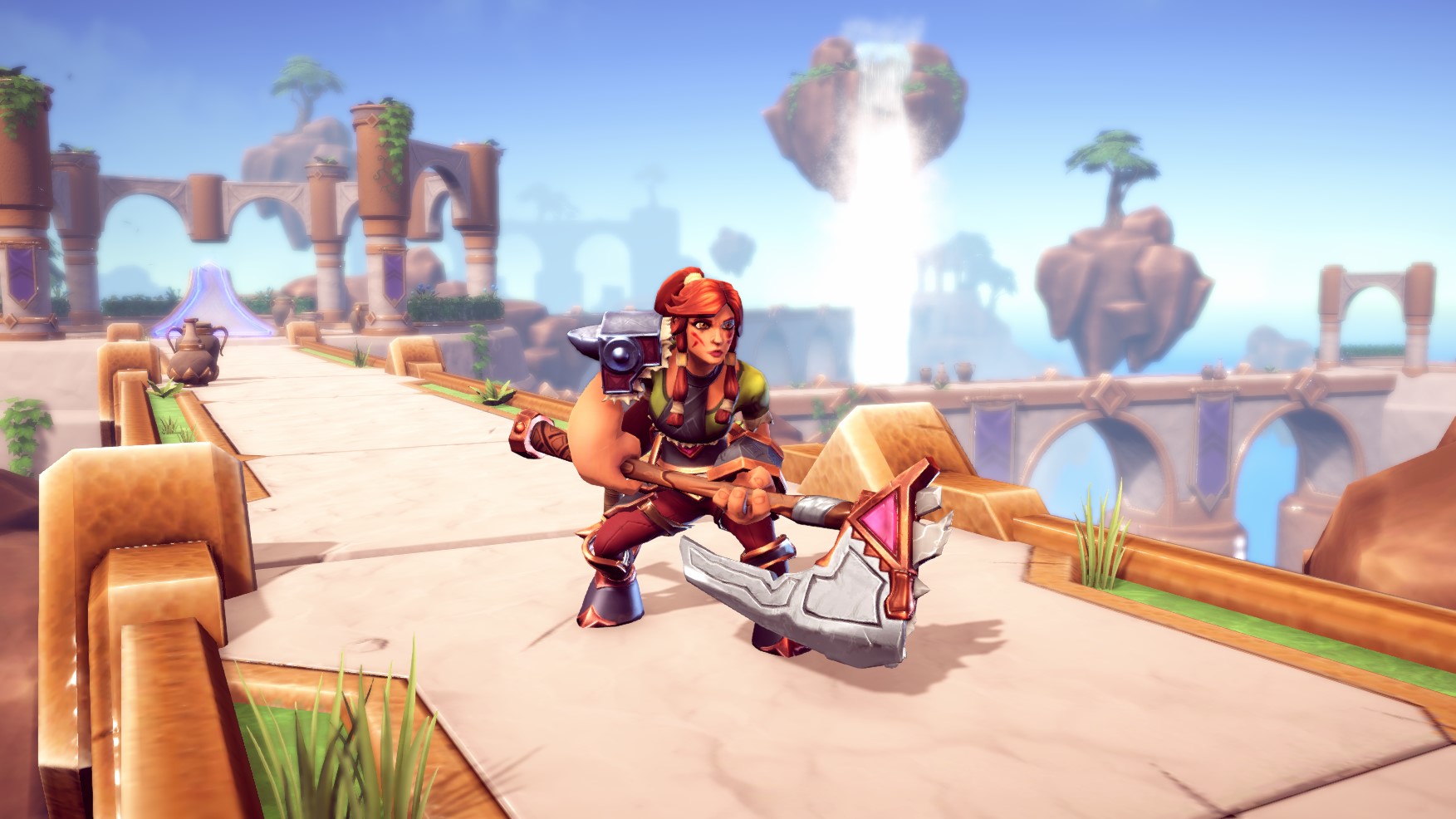 (The starting menu has bright diagonal lights, which also creates few darker spots for the eye to rest.)

The choice around the lighting and the light sources wasn’t as easy or smooth as we first hoped it would be. Every now and then we bump into a problem around it.

Problems which we are always working on and trying to solve. The biggest challenge around it surfaced by the combination of the bright lights with the also bright and soft light tone of the arena. The end result was very intense and tiring to the eye. All the while also having a big impact on the gameplay itself, by making it way harder to recognize or even spot any particle-based feedback. It even hid some little details of the arena itself. The solution was to keep tweaking everything, trying to find a sweet spot. While balancing it all, we softened the light and made the arena a little more darker.

Besides all the general, larger changes, we also took that opportunity to tweak the little details. Such as the looks of the metals, which were not looking at all that metallic. It’s incredible what a little change to the light sources and a few tweaks to the materials can achieve. 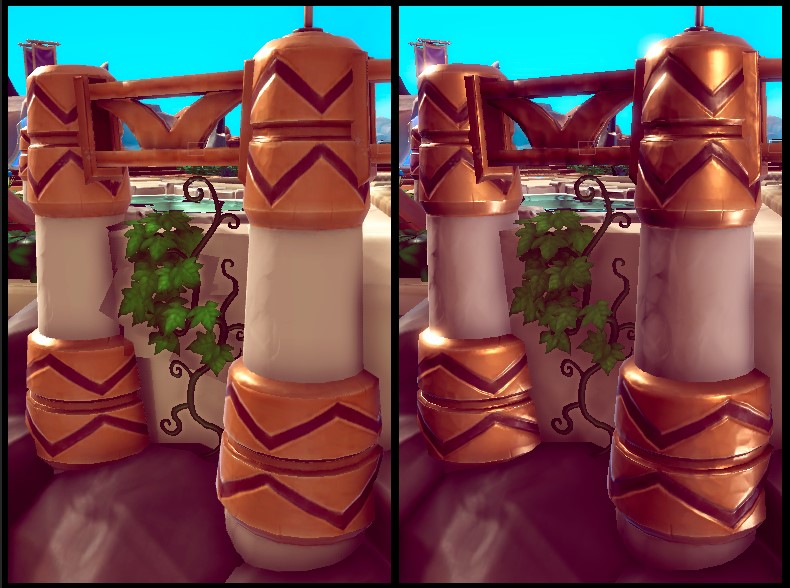 (Close up of the arena details, before changes on the left, current on the right.) 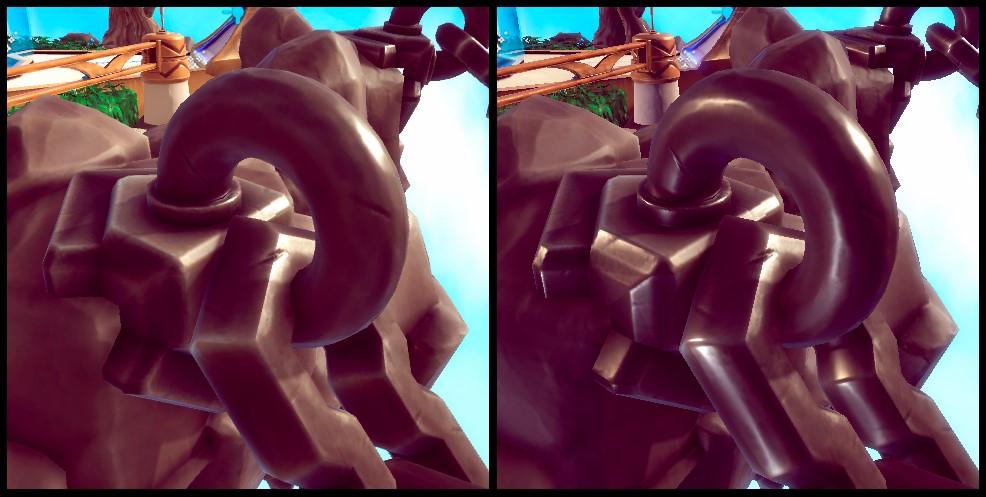 Another problem we faced, was a technical one. Dynamic light and shadows pay a high toll on the hardware performance, because of that we always try to keep them to a bare minimum, looking for a balance between performance and graphical looks. In that optimizing effort, at first we tried to use the very same light sources to impact both the arenas at the same time. For those who don’t know, Skydome is made of two separated, identical arenas facing each other. It didn’t work mostly because whenever we adjusted the light to our liking in one of the arenas, the result on the other arena would be a lot darker and not quite as good as the first one. The solution was to seek out a balance, finding a good spot for the main light source and to add other, smaller, light sources to fix the areas with weak lighting.

Another use of lighting and light sources, is to give different significance to things, while also guiding the eyes and the viewer to specific points of interest. That focus has always played a large role in compositions. Like the spotlight in theatre lighting, which uses a single large lamp to focus solely on the speaker. In games, it’s very much used to guide the players, reducing the need of hand-holding tutorials and interfaces. When done right, the player might not even be really aware of it, it’s an approach that is at the same time more elegant, intuitive and way less intrusive.

Inside Skydome, with all the matches taking part during daylight in a specially sunny day, our use of that technique is really subtle. It can be better seen on other lighting studies we made, like the one illustrated below, where we had a match take part during night time (maybe in the future?). You can see it is prominently used in the portals that lead the players into the arena they must defend. 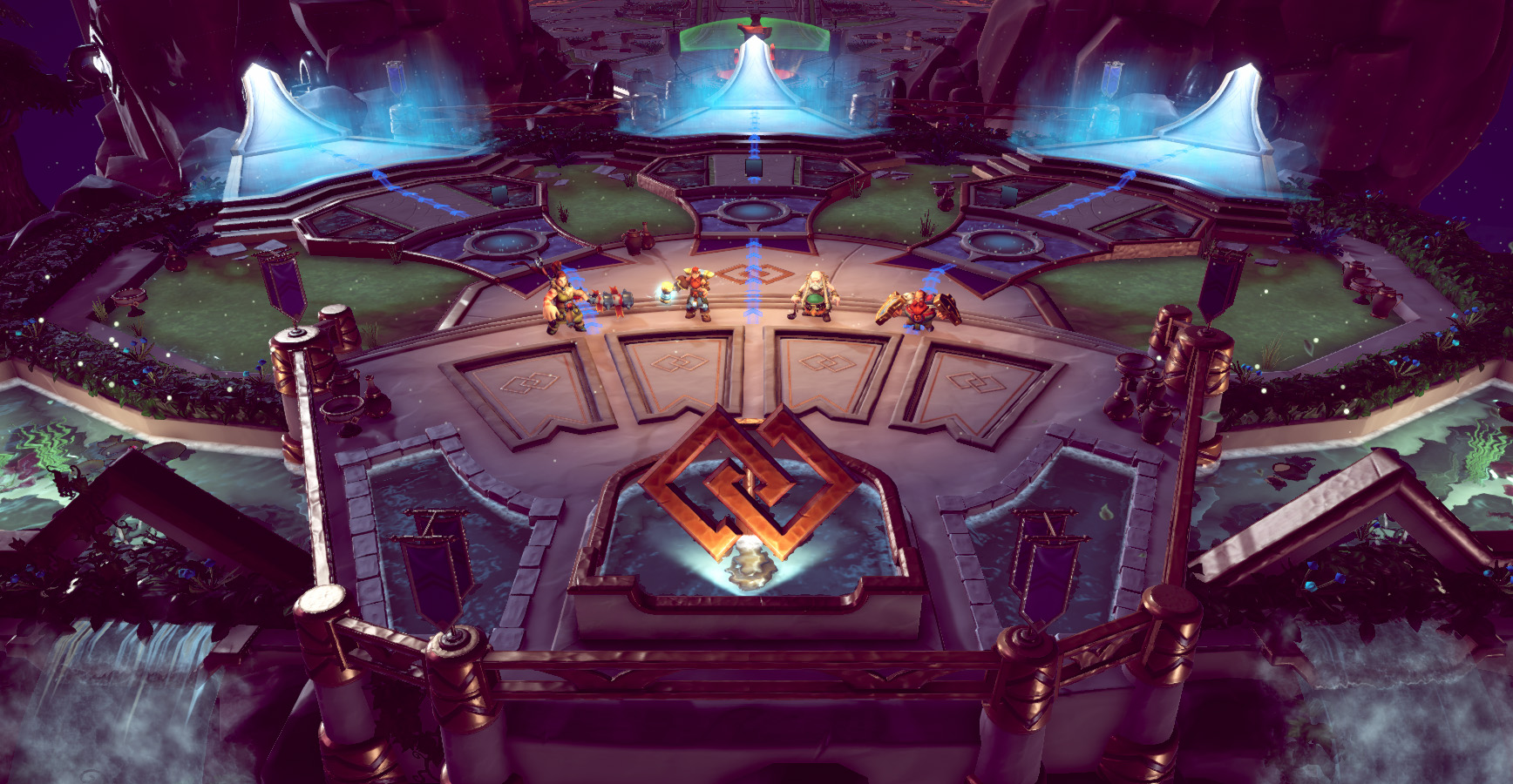 (Study of the Skydome during night time.)

Skydome’s illumination and other visual elements have already gone through some major changes, we are sure that it’s still far from over and we will keep on bettering it. Other problems will rise and we will be always tweaking it.

So far we are happy with the current results and most people we speak with seem to agree, based on the feedback we receive. What about you? Do you agree (or not)? We would love to know your opinion regarding the looks and general lighting of Skydome.

Your feedback helps us build the best Skydome we can, so leave us a comment below!