How is a world in a large-scale game created? What is involved in deciding what areas go where, and how they connect? 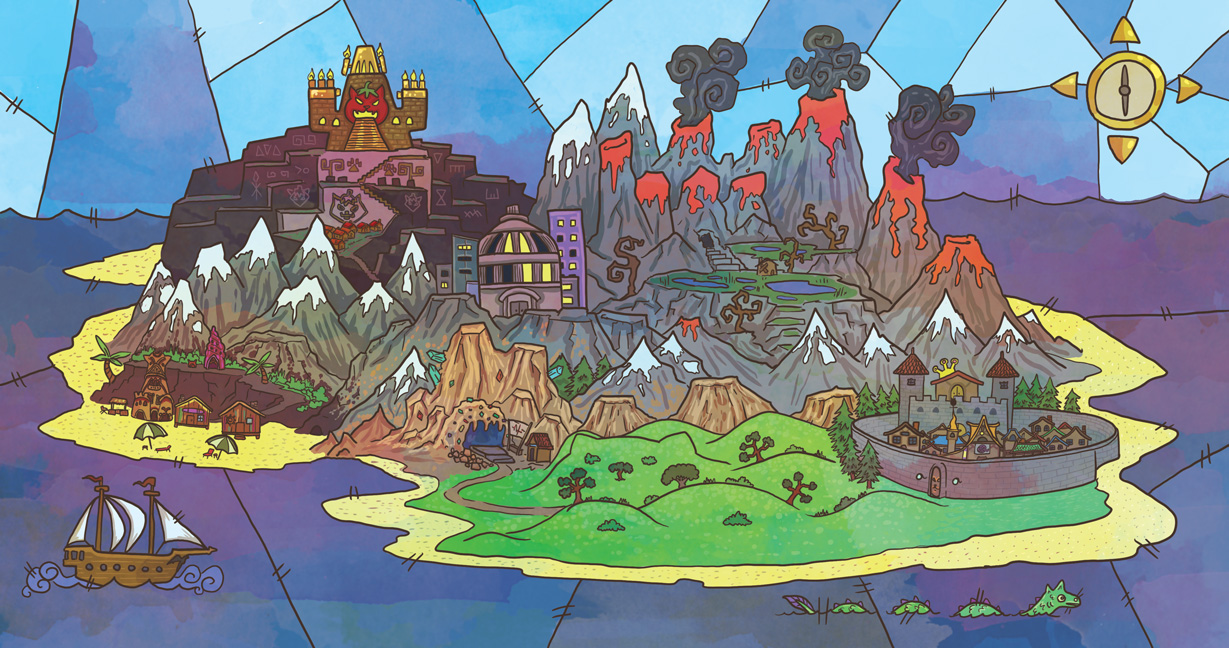 Welcome - to the Isle of Moar! The various cat vegetables and cat fruits have made this island their home - and it is a sprawling world full of mystery, secrets, and cat-shaped hills. Every part of the island to explore is filled with towns, dungeons, boss fights, and ongoing progression. Of course, a world like this isn't something that we can just build as we go and expect everything to flow nicely - that would be like randomly firing cake ingredients into an oven and hoping to get a wedding cake (note to self: get ingredient cannon). A lot of very careful design and planning has to go in to making a world such as this flow smoothly and seamlessly.

Early in production, we determined the parts of the world we wanted to explore. A lot of wild thoughts crossed the table, such as a theme park run by the mob who secretly have a massive underground catnip field beneath the park, or an Akihabara inspired town full of technology. Those specific ideas didn't make it into the final game - but they did inspire parts of the final world design (the mob made it to the final cut, only their role in the game and their area changed once we decided that having secret illegal catnip farms in a game meant to have an E10+ rating was a bad move). As we wrote the game story and script, we finalized which of those planned areas made it into the final game - or how they became modified to fit the story.

Part of what made our interconnected world design an interesting challenge was that we're kind of a Metroidvania, but also not a Metroidvania, because while we have a sprawling interconnected world that you progressively gain access to through new abilities - we also have a lot of JRPG style elements such as towns, dungeons, and so forth. We realized that for a world map layout to work, we would need to split our design into 2 classes: the Overall Island, and each Individual Area. The Overall Island is how all the parts in the game itself connect to one another, without worrying about how they connect. The Individual Areas, on the other hand, are specifically concerned with how an area itself is designed, and where the exits are.

Let's look at the Overall Island first. No worries - we have modified this map to remove the spoiler parts and secrets!

The Isle Of Moar - Minus some Spoilers

The overall world map is built around four main hubs, each representing a different key chunk of the game. Each chunk is concerned with a core part of the story along with core difficulty progression points. On this map those hubs are: Fuzzy Fields, Meowntains of Maven, Meowtropolis, and Shedwood. Reaching each of those areas acts as a core milestone in game progress, allows access to surrounding areas attached to that hub, plus the story and quests for each of those hubs generally keep the player within that hub and its attached nodes. Also, despite the ways the arrows point in the above image, all lines go both ways - so any node in the map that can be accessed in one direction, can also be accessed in the other direction as well.

This hub configuration allows us to really focus the player on a particular set of circumstances and plot. This actually affected the world design a bit as well. For example - Derpington originally existed much earlier in the game, and could be accessed from the Tropical Beach. As we finalized our story however, some very dark events were decided to place in Meowtropolis. Originally the player went straight from Meowtropolis into the Purrmato Empire - which as you can imagine, getting near the end of the game, there are some continued dark themes being explored there. We wanted to give the player an emotional break rather than just hitting them with dark theme after dark theme - therefore, we moved Derpington to exist between Meowtropolis and The Purrmato Empire, with some required quests to complete to continue the story. Once we made that change, everything had a much better flow to it, and the emotions of completing Derpington made the player far more ready to tackle what lies in store in the Purrmato Empire.

One gameplay element of the Overall Island that is not marked here is our fast travel. With a world this large, we absolutely need a way for the player to be able to quickly navigate around. We built and designed a very fitting fast-travel system, which we will talk about in a later DevBlog. Though the main reason we didn't mark it on this map is because finding the fast travel points is part of the game - and showing you where they are would be spoilers!

The individual Areas are a bit different. They don't have a concept of a hub, and instead make use of the whole map of the area. The map of an area can consist of one or more Unity scenes, and flex the open-world exploration pretty heavily. Let's take a look at the map for a sub-area of Purrtato Town - the Dimlit District. 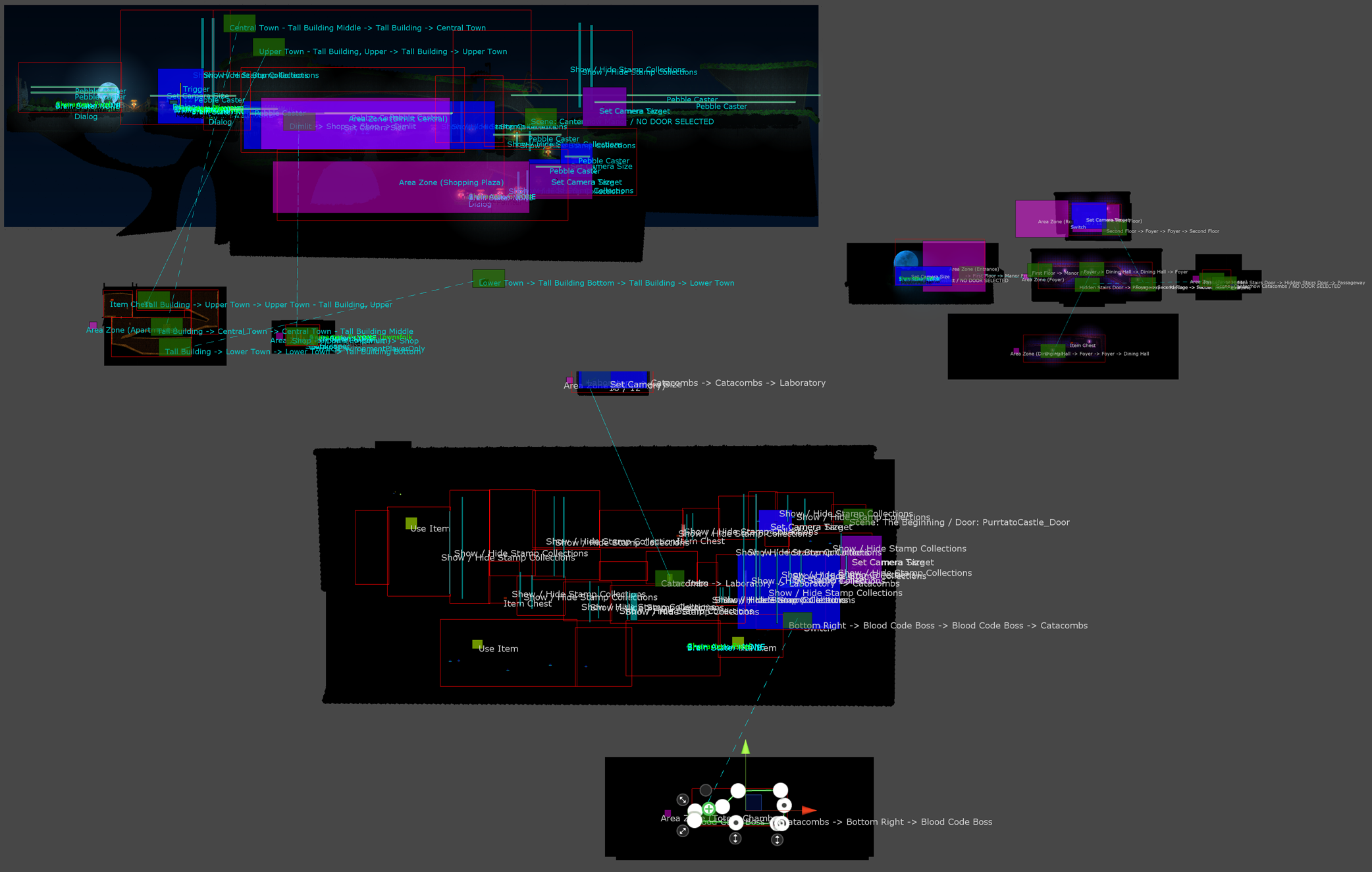 This map consists of 3 scenes, which we have stitched together here for you as screenshots from inside the Unity editor. These three scenes connect together, and have a self-contained series of quests and story. Each area and sub-area of the game has a similar design - they have their own events and side-stories, along with core stories and quests that tie into the overall story and progression of what makes up A Purrtato Tail as a whole. As a reference of gameplay time - the above sub-area, the Dimlit District, could take anywhere between 1 and 3 hours to complete, depending on how much a player explores and how many side-quests and hidden things they wish to find.

Collecting characters is a very key point of what makes A Purrtato Tail unique, and much of opening up new parts of the game is designed around collecting new characters. In an upcoming DevBlog, we'll discuss more about character collecting, and how characters can be used to solve puzzles and progress the game!