@Adam With Update 26 out the door, we are going to be going through and making some further renovations to the in-game communication systems. One of our goals is to consolidate the system for marking up the map and replace it with a new tool. Map Posts help players communicate to each other in a flexible manner using the new map screen we introduced in Update 26.

Like other tools in Foxhole, we aim to put features in the player's hands and gather feedback in regards to how players actually use it in the game, and for what purposes. In the past, we have preemptively created in-game tools with some ideal of how players should to be using it, but in a live environment realize that they don't fit in with normal player flows. 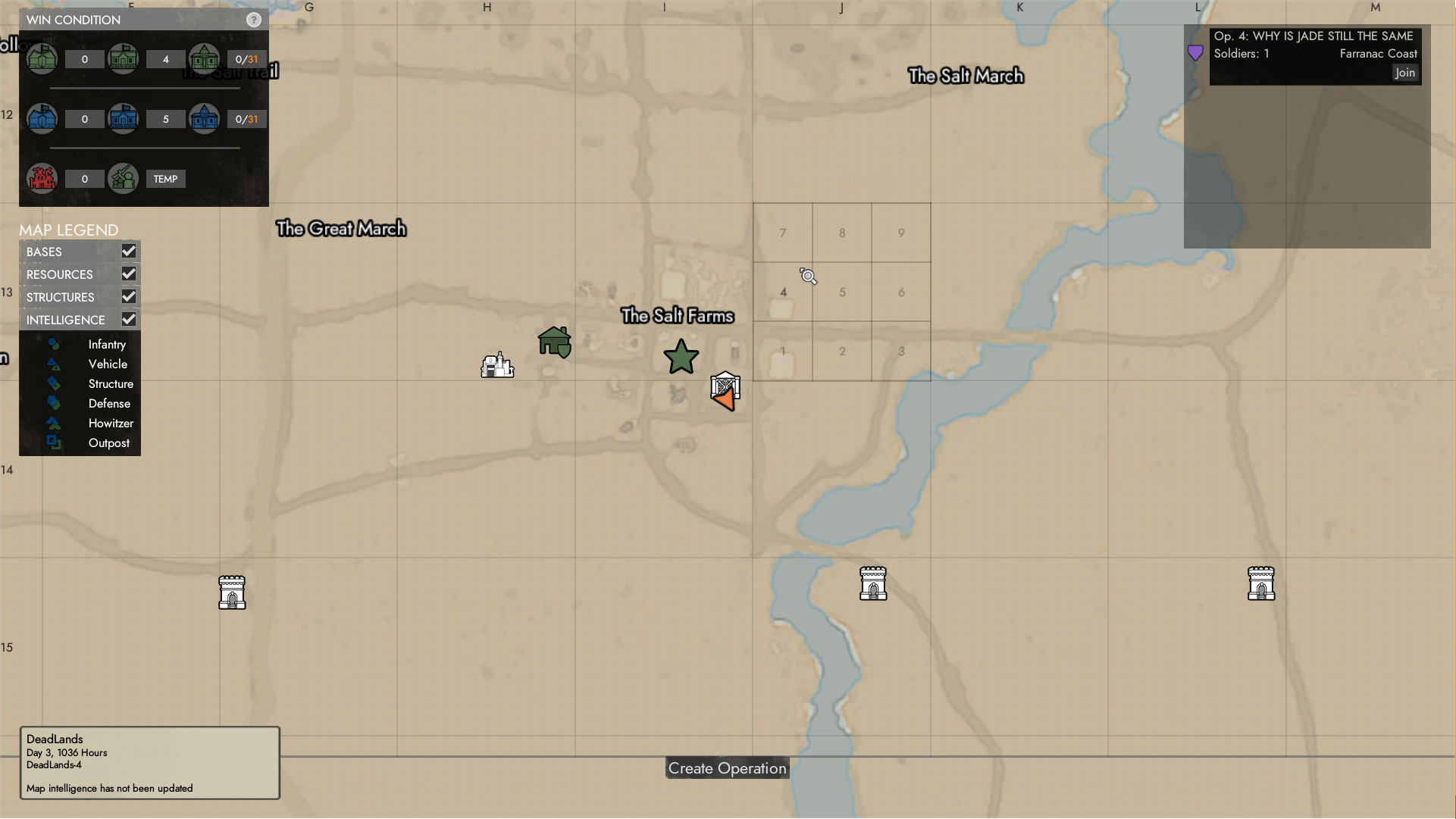 So what is the problem we are trying to solve? We've long observed that players often try to "shout into the world" using text chat and map callouts. When doing so, it's hard to know whether or not anyone will hear you. Examples of this might be "BMats needed at Abanoned Ward" or "Reinforcement needed at Jade Cove!". Rather than start with a brand new approach, we decided to build a tool that helps players convey what they are already are trying communicate to others, but in a more effective and flexible manner. Our first attempt was some sort of Forum style message board in-game that people should essentially make and create requests that people could fulfill. Some sort of psuedo-quest system 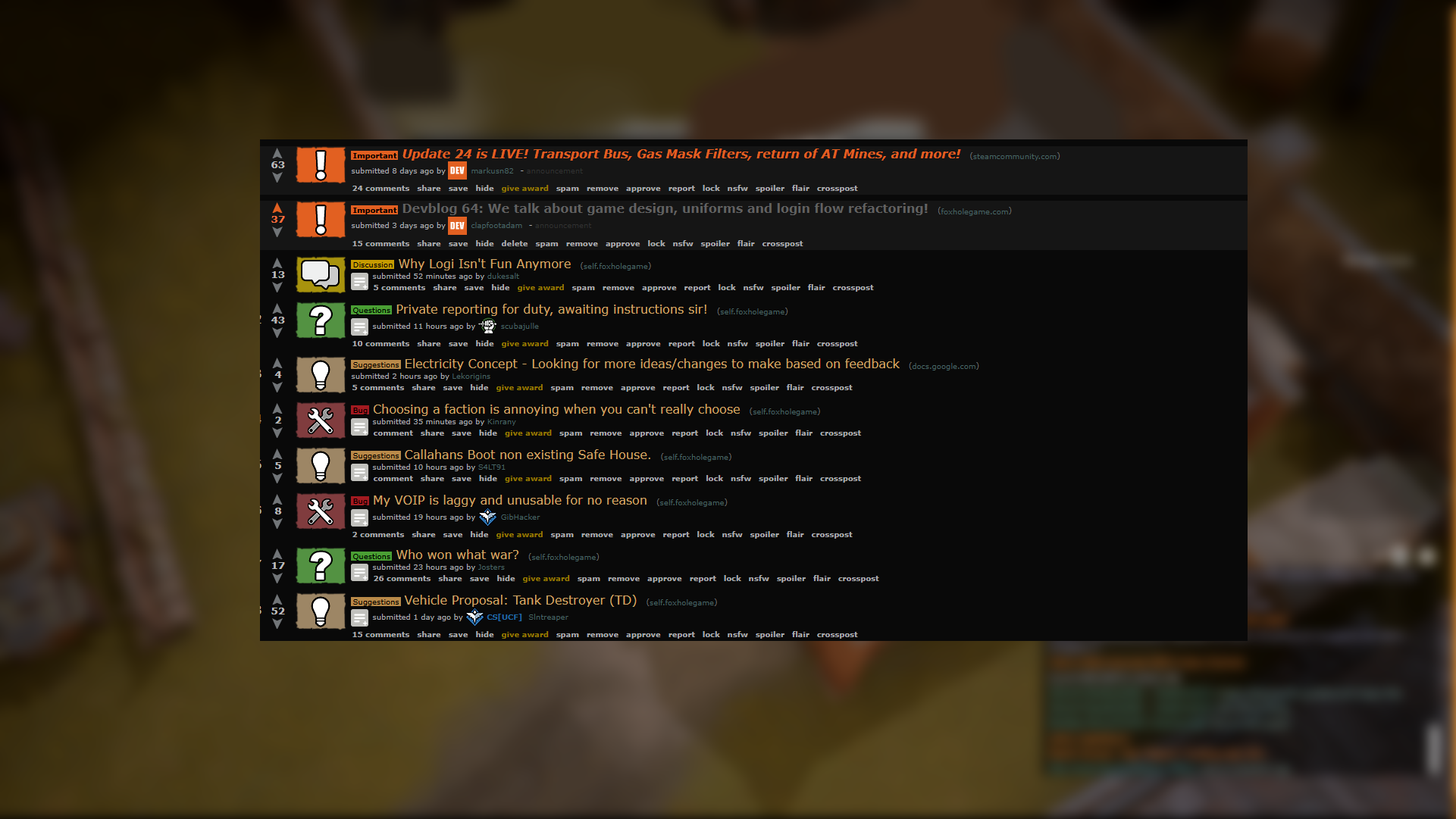 This sort of standardized communication tool is obviously wonderful, but it can feel removed from the world of Foxhole a bit. We realized that people want to quickly digest all of this information in a place they are always looking, the map screen. Bonus: You can see a failed attempt at automatically generating a world map image here in the backgroundOur second attempt took the essential elements of the forum system and incorporated it into the existing map marker system. The whole idea felt more appropriate, but it still required players to click several times, which is entirely too unobtrusive. Trimming the fat some more we realized that there are certain things people always do in Foxhole, so we needed to provide a system that worked in harmony with player's existing flows. 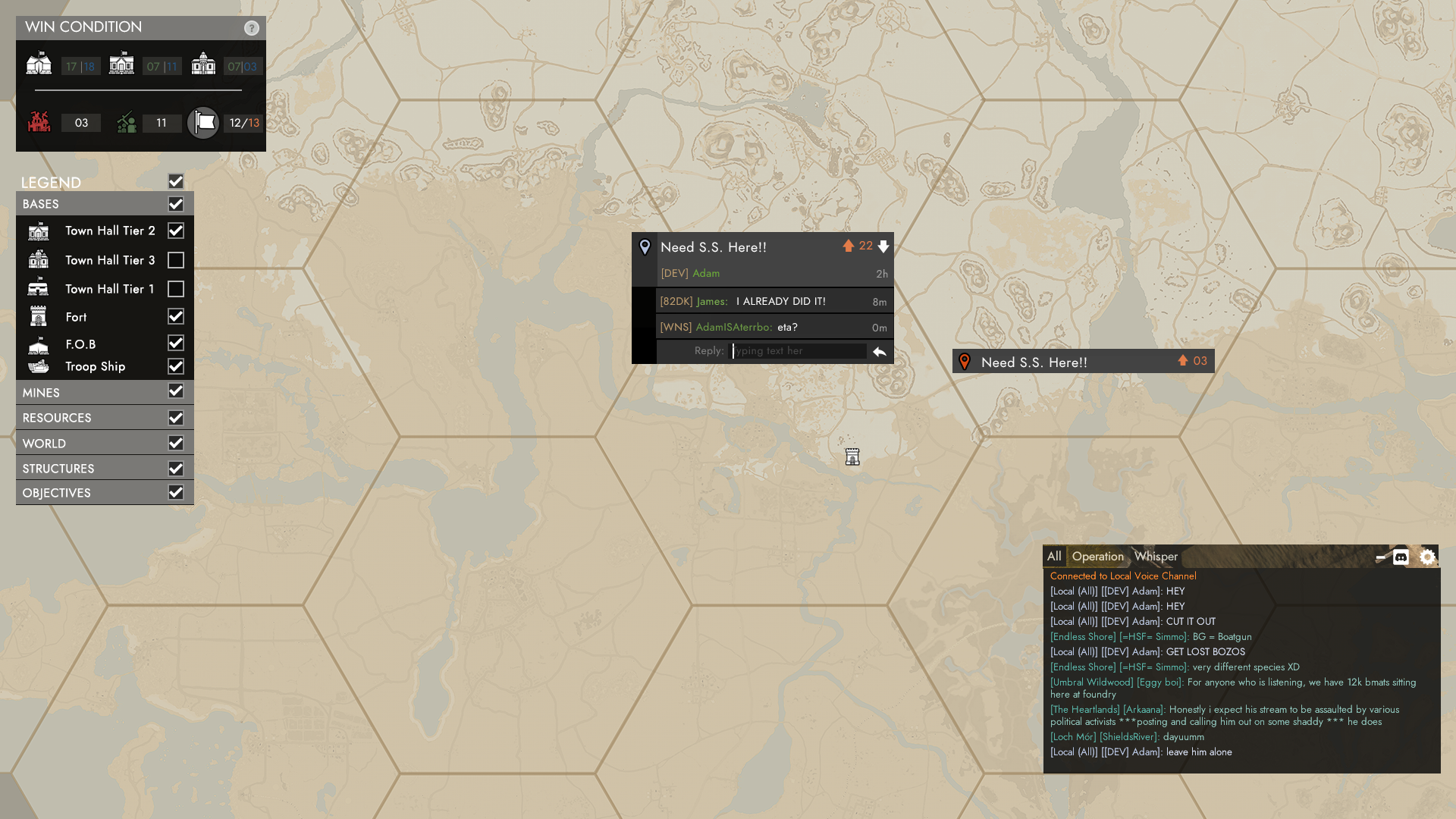 We realized that having a multiple panel system was too clunky, so we started explored a system of ‘sticky hovering’ that will allow players to expand the content of the Map Post without having to click off. Our goal is allowing players to upvote the Post, and reply all without having to move your mouse very far. These map markers will potentially have a ranking which will determine their visibility at various map zoom levels and how quickly they decay.Obviously this is highly work in progress, but our goal here is to add a tool that allows you to communicate across the world in a flexible manner. Let us know what you think!

@Mark One of the very early goals that we set for Foxhole is for large scale operations to be possible in the war. While we've seen some pretty amazing operations, it's rare to see ones that are planned over several days or ones that involve more than one or two dozen players. Our eventual benchmark is for 100+ player operations to exist in the game, so we'd like to take some steps forward in supporting longer term preparation.The Operation Stockpile is essentially a player built Storage Facility that can safely store equipment and vehicles until the start of an operation. A large Squad can access this structure to schedule an operation to start at some point within a certain time frame (e.g. in 48h). Until the start time is reached, any player can submit Crates/Vehicles to the stockpile, but nothing can be retrieved from it. When the operation begins, the stockpile becomes fully public and anyone is free to access it's contents.

The old Port Base asset is being repurposed for Operation Stockpiles for now to be clear, the intention is for these structures to be communal. They will appear on the map as special items so any player can find them and support the operation by either contributing to it's stockpile or being there to help when it begins.There are obviously a lot of potential risks with this feature, such as hoarding, griefing, and other issues attached to this but we want to exploring the possibilities of larger scale, more persistent planning options for operations. The ideal outcome is that both dedicated groups and more independent players can work together towards clear objectives using these Operation Stockpiles but we'll have to see how things play out.

@Adam After Update 26, I’ve had some time to practice and research techniques that I’ve always wanted to explore. One of those techniques is an old practice called “Vertex Animation” Which is an alternative way of bringing something to life. Almost every playable character in a video game moves because of an internal skeleton. The Mesh of a character is ‘skinned’ to these bones, and are then posed into frames, and played back. Unfortunately, this calculation is done in real-time, meaning that every time any character moves on screen it incurs a server cost. Oversimplifying in order to explain, this means the more bones in a game the worse your game will run. This alternative technique of ‘Vertex Animation’ Essentially means you move the mesh of something in a game without bones. In order to do this, you must save this movement somewhere, in the case of this study, this information is baked out into a texture file that contains all the vertex positions of the given animation. The game will essentially read this information and move the vertices accordingly. The image below shows us taking the animations of this beautiful butterfly, and ‘baking’ that information into a texture

This is useful for several reasons. One of which is being able to have animated meshes in a particle system. We did a dumb little test, but in theory, we could have animating critters running around the streets of foxhole 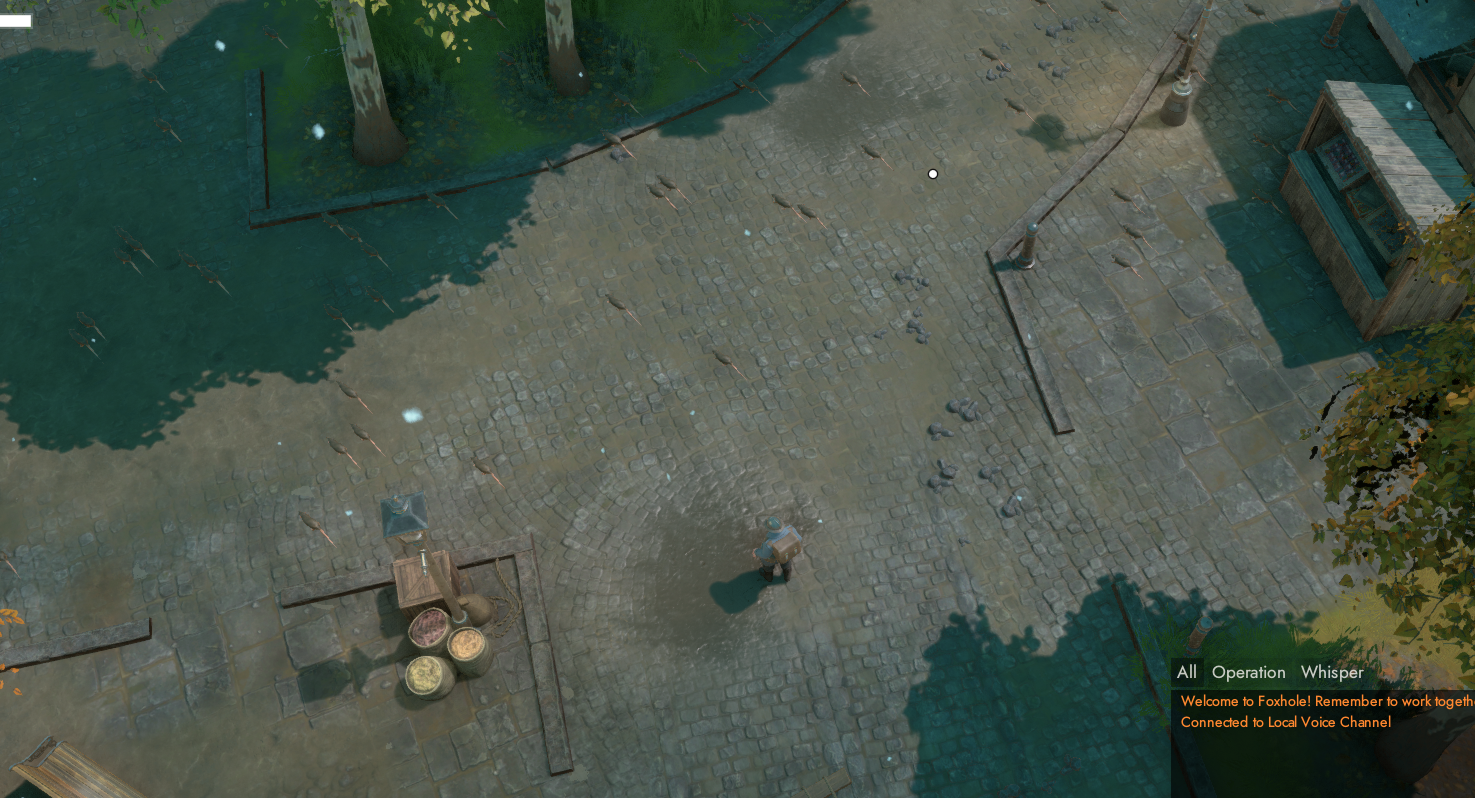 I only made critters because I was left to my own devices, but there are many interesting applications that we could potentially use this for. One of which I’d like to explore is destroyed meshes. Perhaps I could figure out a way for environment assets to actually spill over, or chunk off or explode. I’m tremendously excited to see where we can use this technique.

That wraps up another Devblog. Be sure to check out our Foxhole Devstream for more information about upcoming features. If you have any burning questions you want answered be sure to tweet them to @Matt directly on Discord or Twitter, if your question gets selected it will be answered live on stream!

Anothet good update. Keep it up! :)