Small presentation of the main circuit scheduled for Alpha 2.0 and small announcement about the architecture of Wheelless.

Hi everyone! I hope you had a nice week!

Today I'm going to talk about our next circuit, make an announcement and explain what is going on behind the curtains of Unity a little bit.

So, as you may have seen in the previous blog post, I showed a scan of a circuit concept that I drew some time ago. We're gonna talk about it!

First of all a small description:

It's a circuit on an cold planet, inside caves and over the sea. There are also some pillars and small structures from an ancient civilization.

ALPHA is set in spring, there is a waterfall that leads to a crystal cave that fills with water over time. The Tyranospace kindly build a bridge over the sea for your driving pleasure!

OMEGA is set during a snow storm. Everything but the sea froze, including the waterfall, and pillars have fallen, creating a new path inside the mountain. Ice makes you slip, and careful about the falling stalagtites!

Before locking down the semi-final design, we went back and forth on this circuit multiple times.

We started brainstorming about where we could make a circuit that is interesting and easily identifiable. The icy planet didn't came up first or is not what we wanted the most; it is only one of the few we thought about that was the most worked out.

In the meantime, I was designing new gameplay systems. One of them is directly tied to the circuits: the Health System 2.0, more specifically the ambiant damages: there are zones where you takes some specifics damages, either to your health, stats or even creating some gameplay elements. That new feature motivated us to make the Alpha version a simple and straightforward circuit, and the Omega version more difficult, with a special gameplay mechanic (which is ambiant damage, along with others).

Back to our design: we had a set, we needed tracks! The first version was just a square with some basics ideas: here a cave, there some arches, then why not a huge stone whale before a tunnel? It was moslty ideas thrown at random, but enough for us to really start working on a real functionnal circuit. 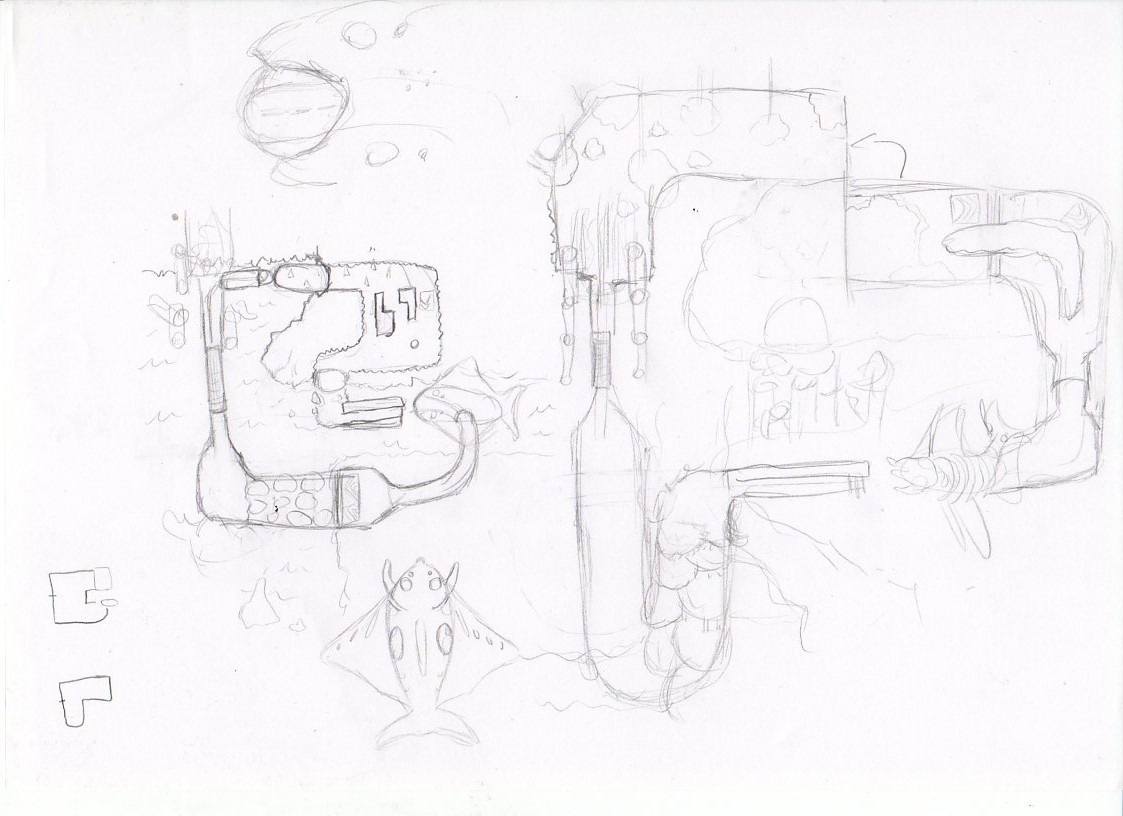 That one was the first iteration taking into account the Alpha & Omega versions. It included a whale corpse exploited by machines.

Remember when I said that we'd work on a real art direction? Well, during some researches, I came across this. If you're no developer: it's a really, really easy and intuitive 3D tool for Unity (our engine). I got some Maya3D courses when I was in programming school, so there is no problem for me to build up some 3D assets. Better: it is actually a total problem solver!

You see, Unity can work either in 3D, or in a special flat version of the engine in 2D. Do you know what this little dude represents?

Of course you do! (If not, it's an icon representing general directions in a 3D environment. Where were you during math and physics class? :° )

Right now in Unity we work in a 2D environment. This is what our scene looks like, using the 2D editor: 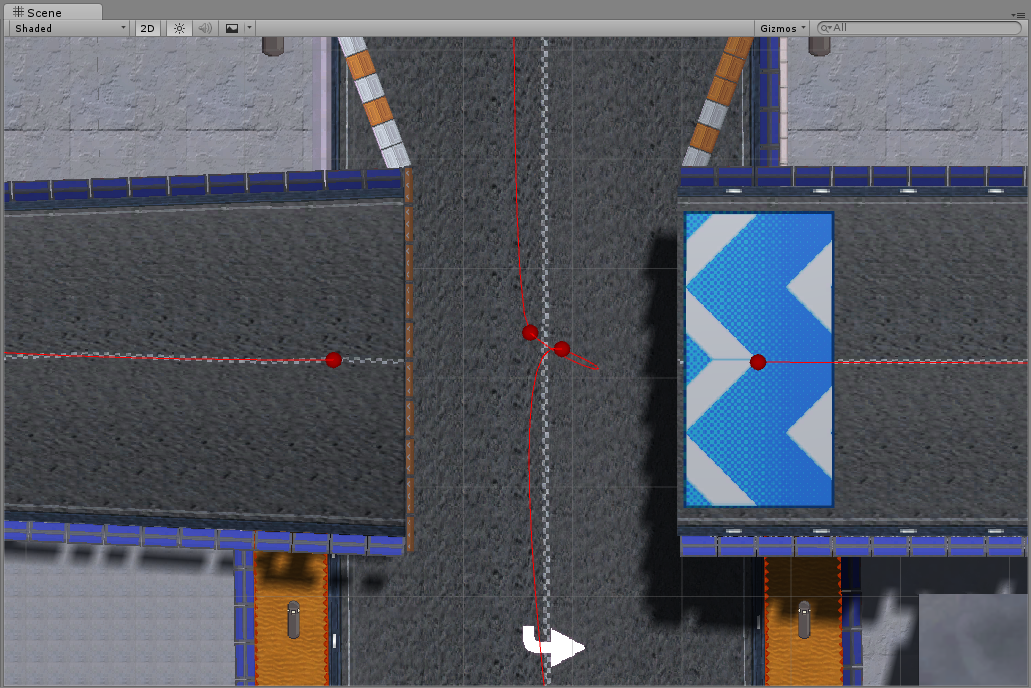 And this is a view of a normal (slightly tilted) 3D perspective using the main 3D editor of Unity: 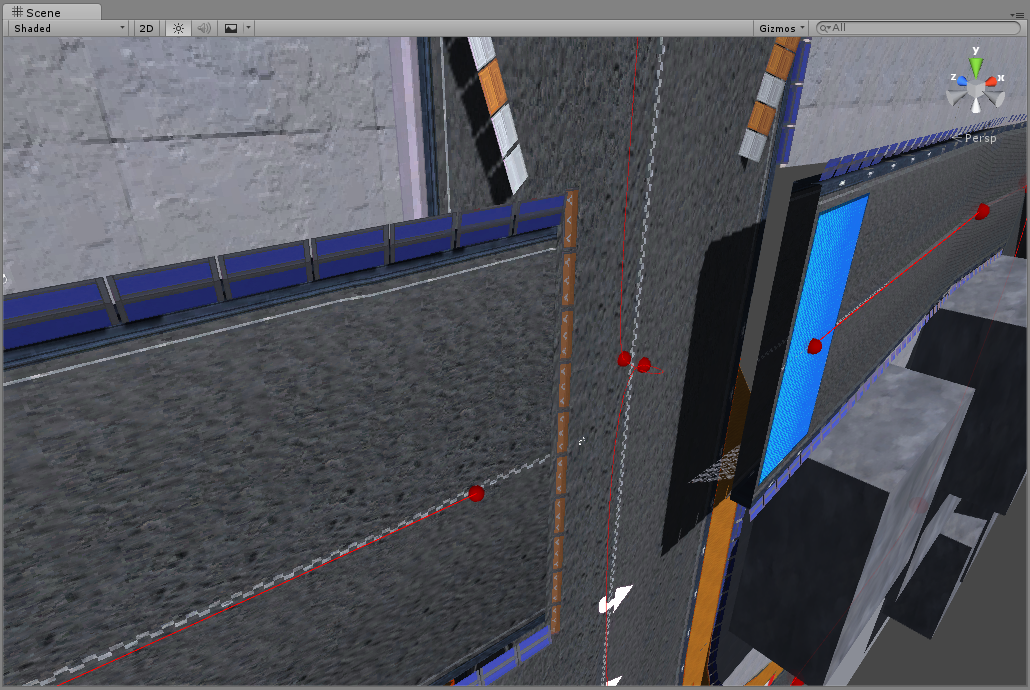 Notice the perspective gizmo in the top right corner: the green arrow (y) is UP, red (x) is RIGHT, blue (z) is FORWARD. As it is right now, our circuits are not ground-flat with a falling down camera as you would expect; but actually straight up vertical! The camera is facing forward! Gravity isn't even real!

I have to admit, I always wanted to make 3D circuits (that's why during early development, I switched from an full 2D orthographic camera to a perspective one, even adding some jumps and launchpads), but the tools that I had for building up circuits were only designed for a 2D use only (the current circuit, pictured above, use those tools. You can see that there are some limitations!).

That's why the 3D tool is a relievement: I can finally make those 3D circuits, and a lot more: the perspective camera will have a real purpose, flappy spaceships is over, collisions will be much finer and logical, jumps and hovering will be no more faked, and the elevation! I can finally make a circuit 50 meters tall with propers junctions. You understand why I said it is a problem solver!

Back to the design pls

A couple hours before finding the new 3D tool, I was drawing what was initialy going to be the final concept for Ice Circuit: 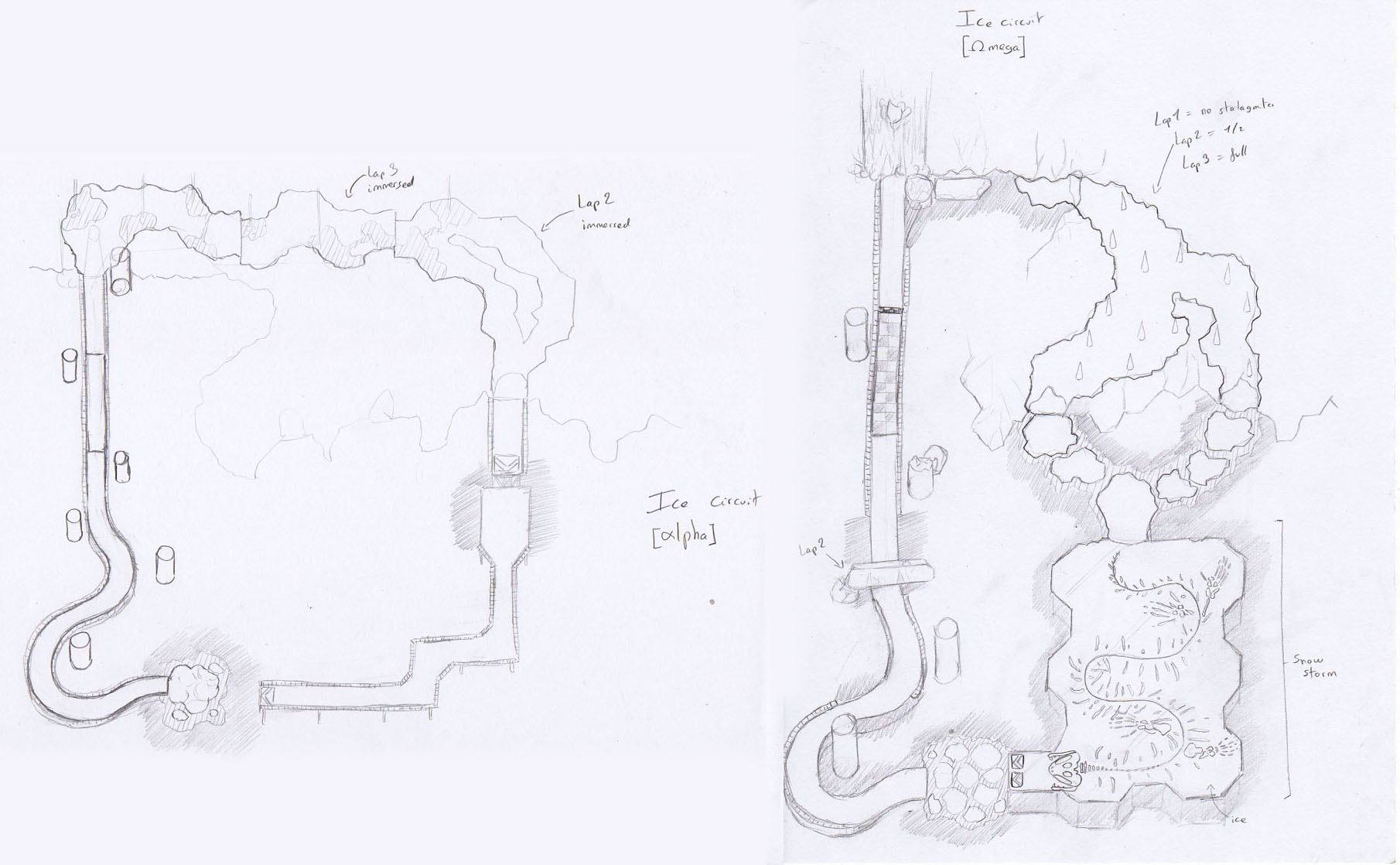 I ditched the Whale corpse. It may be original at first, but not really in line with our way of thinking after all.

I started prototyping the Alpha version of Ice Circuit in semi-3D, and came up with something like this: 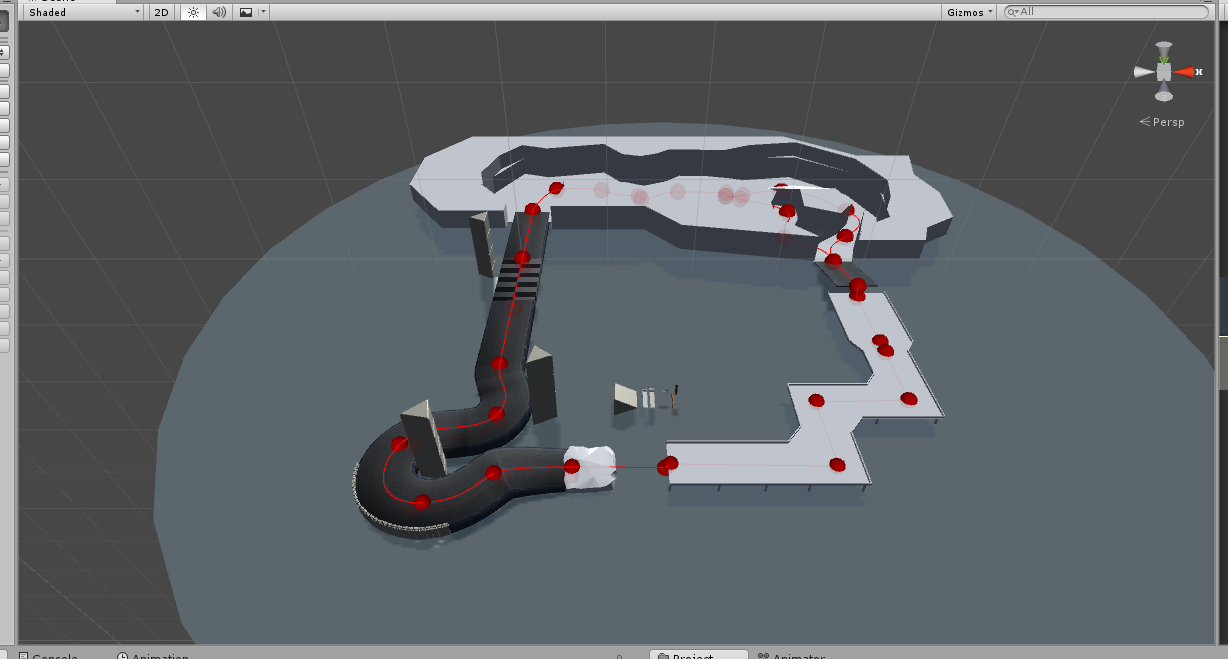 But it didn't felt right. It was not really fun nor long enough. What it needed was... MORE HEIGHTS!

Well, it has limited options and only one circuit (obviously). But I will work on it from times to times, and I'll let you know when there is more options or new circuits added on Twitter.

As you can see, Ice Circuit have a little evolved since the previous concept.

More heights with real slopes and cliffs! In the ALPHA version, water will fill over time inside the caves. In OMEGA, water will froze in the same caves as ALPHA, so the same path will result in different gameplay style!

And it's now time for the announcement:

Good news is, it will be AWESOME.

Bad news is, converting our current 2D architecture to a 3D one will takes weeks! Meaning it will push back the release of Alpha 2.0.

But it will be worth it!

Small update: what is everyone working on?

Well, Hillean & Prox are still missing in action (working), Yuubae is continuing work on the scenario and the factions/champions. I started to convert the engine today.

Until next time! Thanks for reading!